We first wrote about Mr. Thomas on December 16. The mainstream media narrative regarding his death was just as intelligence-insulting then as it is now. The only indisputable fact is that Mr. Thomas died in his shower. Mainstream media implied said he had a seizure in the shower and died.

They also implied that the seizure was caused by a car accident nearly three years prior; and that seizures were a chronic issue for Mr. Thomas since the accident. Yet all mainstream reports at the time (February 2019) said Mr. Thomas suffered only minor injuries in the accident. Further, he played NFL football six months after the accident. A man having chronic seizures cannot play NFL football.

Perhaps recognizing the ridiculousness of the foregoing, mainstream media created a new narrative around CTE yesterday. And the campaign was highly effective. “Demaryius Thomas” was a top 20 Twitter trend in the United States for at least two hours yesterday morning. Many of said tweets mentioned CTE, including one from NFL free agent wide receiver Dez Bryant. 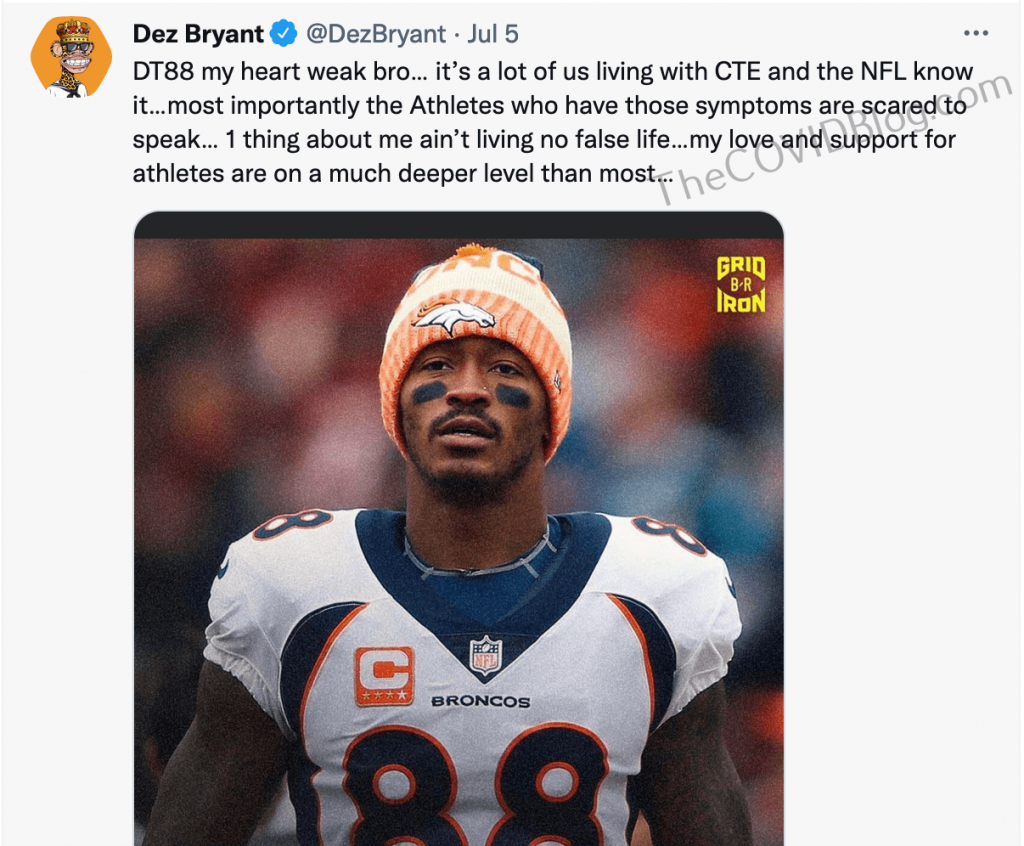 Mission accomplished in deflecting attention to CTE by mainstream media.

Most of you know that this blogger was a former sports reporter for several years. These types of articles provide the opportunity to not only talk sports, but also the realities of this global vaccine genocide and the perpetual propaganda necessary to keep it all going as planned.

CTE did not kill Demaryius Thomas

Everything mainstream media and their big pharma-funded universities report must be taken with a grain of salt. Again, Boston University researchers are the primary sources reporting that Mr. Thomas had “Stage II CTE” at the time of his death.

Mr. Thomas suffered only two reported concussions throughout his entire college and NFL playing careers. Citing Boston University’s own data, the nonprofit Concussion Legacy Foundation says that CTE is caused by a “history of repetitive brain trauma.” The Foundation goes on to say:

“This doesn’t mean a handful of concussions; most people diagnosed with CTE suffered hundreds or thousands of head impacts over the course of many years playing contact sports or serving in the military.”

The CTE Society lists the symptoms of Stage II CTE as depression, mood swings, headaches and memory loss. Neither of the foregoing organizations list seizures as a symptom of Stage II CTE. In fact they don’t even list it as a symptom in Stage IV. A few minor cuts and scratches from a car accident also do not cause seizures. But Pfizer, on its own adverse event report from April 30, 2021, lists as possible adverse effects to the shots:

…and about 20 other types of seizures.

We’ve chronicled numerous cases of post-injection seizures. As of today, none of said victims have died from the seizures. But many thousands and perhaps millions have collapsed and died suddenly from heart attacks and cardiac arrest since this vaccine genocide commenced. Mr. Thomas collapsed and died while taking a shower, which is consistent with numerous other post-injection cases we’ve covered.

You may believe big pharma-funded universities and mainstream media, or you may use common sense, deductive reasoning.

Demaryius Thomas was a wide receiver in the NFL

This section must be prefaced with the fact that any man able to compete in the NFL is tough to some degree. But the game has changed significantly since 2004-05. The first time this blogger saw one of those new “illegal contact” penalties” on defensive backs that year, he knew football was different forever. Since 2006, quarterbacks (except Cam Newton) aren’t allowed to be hit at all basically. The game is still violent today, but nothing like it was pre-2004.

Mr. Thomas was a wide receiver. That position is the least contact position in football other than quarterback. There’s also very little to “fear” on an NFL field for wide receivers since 2004-05. Free safety Jack Tatum played for the Oakland Raiders from 1971 to 1980. He was nicknamed “the Assassin.” Mr. Tatum is known for some of the most vicious hits ever recorded in NFL history. His most infamous hit happened in an exhibition game no less.

Tatum collided full speed with airborne New England Patriots wide receiver Darryl Stingley after an incomplete pass on August 12, 1978. Mr. Stingley spent the rest of his life in a wheelchair after that hit.

Mr. Tatum was not penalized in the game and never apologized because the hit was 100% legal at the time. Those “headhunter” safeties continued in the 1980s and 1990s, with guys like Ronnie Lott, Steve Atwater, Chuck Cecil, John Lynch, etc. All wide receivers faced the same potential fate as Mr. Stingley on any given play prior to 2005.

Granted there are still “dirty players” in the NFL today who hit like Tatum, Lott, etc. In fact many people believe the reason former Pittsburgh Steelers wide receiver Antonio Brown acts the way he does today is because of an illegal, vicious hit by Cincinnati Bengals linebacker Vontaze Burfict in 2016.

Burfict was suspended without pay for three games because of that hit. But again, prior to the turn of the millennium, that hit was 100% legal.

The point is that Demaryius Thomas played NFL football in an era where quarterbacks and wide receivers are provided extra protection from the referees. He was also not known as a physical receiver, like say Terrell Owens, San Francisco 49er Deebo Samuel, or former Carolina Panther Steve Smith. It’s simply lazy, desperate propaganda blaming Mr. Thomas’ death on CTE.

Use the hashtag #ABV for Anything But the Vaccine

Former Chicago Bears safety Dave Duerson, former Philadelphia Eagles safety Andre Waters, and former San Diego Chargers linebacker Junior Seau are three of the most infamous NFL CTE cases. They all have two things in common. All of these men played in the toughest era of the NFL at high-impact positions. They also all committed suicide. That’s what CTE does to the brain; it alters brain function so much that these men simply did not want to live anymore.

NFL players are a different breed of human being. They know full well that their game is dangerous. The best players get paid millions of dollars and set their families for generations. Mr. Roddy White is a former NFL wide receiver for the Atlanta Falcons. Again, that’s the same position Demaryius Thomas played. Mr. White posted a tweet thread in 2012 summarizing the realities of professional football and potential injuries. 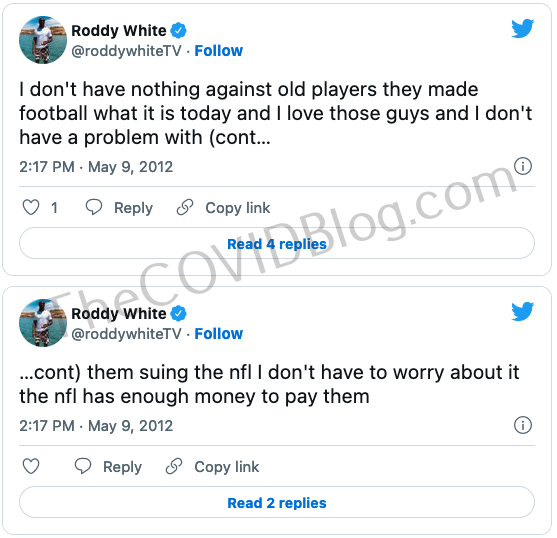 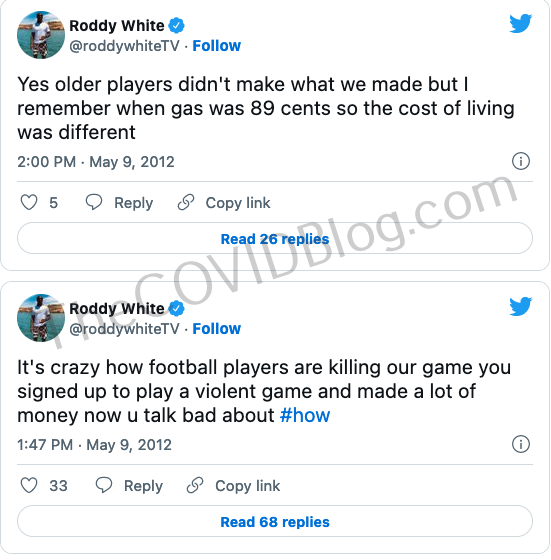 Mr. Thomas and all other NFL players know what they are signing up for. But again, just one post-injection death of an NFL player would shock fans and players alike. Mainstream media played mental gymnastics for days after 26-year-old NFL player Jaylon Ferguson died suddenly last month. Some random newspaper said he was “xanied up” and thus overdosed on drugs. And that became the official narrative. The official narrative around the April 9 death of former Washington Redskins quarterback Dwayne Haskins also takes a leap of faith to believe.

Forget sudden adult death syndrome. These mainstream media narratives are so ridiculous and intelligence-insulting that from now on we’re calling these deaths #ABV or “Anything But the Vaccines.” #ABV is now the most deadly disease in human history. We can safely say comedian Bob Saget, Australian cricket player Shane Warne, baseball Hall of Famer Hank Aaron, and Foo Fighters drummer Taylor Hawkins all died of #ABV.

The COVID Blog™ is providing a free vaccine for anyone who wants to protect themselves and families from this extinct-level disease called #ABV. Simply continue reading our content every day, donate whenever you can, stay vigilant and protect your friends and loved ones.

Since the 💉 must be stored at very low temperature… it’s safe to wonder how might the inoculated be effected when being surrounded with warm-hot water… there’s no shortage of bath, jacuzzi, shower, swimming deaths in VAERS

The low temp was part of the cover-up ….the graphene oxide crystals only begin to align into the visible nano-circuitry at warm temps so the liquid stays clear till it’s administered.

Remember the Japan batch that had to be discarded because it had a dense grey substance? They must’ve left it on the bench too long, and the story disappeared from media like lightning.

The four active player deaths this year – Demaryius Thomas, Jeff Gladney, Dwayne Haskins, and Jaylon Ferguson ties the record set in 2007. They’re all a bit suspicious – CTE, car accident, walking across a live freeway, and OD.
I don’t know about you guys but after the Bob Saget cover-up, I don’t believe anything croners says. They work for the government who pays their salary and controls any information released from the office.

The USA is about 9 months behind the rest of the world in regards to the vaxx and boosters. We did not have the vaxx mandates until after the biden administration was installed. Boosters came out later and the push to vaxx younger children came later too in comparison to the rest of the world. Hence the delay in our athletes dropping over “suddenly.” Unfortunately it’s happening with more regularity and it is getting harder to explain it away. It is a shame that not only were their lives ended prematurely for a vaxx they did not need but their cause of death is a lie and many times taints them. Like car accident, CTE, drugs – a subtle implication- it was their lifestyle or life choices that caused their death. They don’t deserve that. RIP 🙏 ❤

I upvoted you, but you do realize many of the vaxxed want US dead, right? Also, I lost my job because of them. But yeah, wish them well. Sure thing.

Isn’t Boston University, where all these fairy-tale studies are coming from, Anthony Fauci’s Alma Mater?

they sure didn’t deserve that, struck dead by mRNA. it’s getting messier every day.

I think Fauci went to College of Holy Cross undergrad and Cornell Med school. Presumably he’s fallen Catholic. Then he went on to manufacture aids, covid, zika, swine flu, and anything to make a buck for him and his masters at large pharmaceutical companies.

Fauci’s a Jesuit freak. Evil people. His wife, Christine O’Grady is a ”bioethicist” at the NIH. She signs off on the beagle torture, gain-of-function, and other disgusting and nefarious projects. ‘Nuff said.

Sounds to me like Climate change has claimed another life!

You’re thinking of the former cowboys running back.

A cowboys running back that recently passed had his death attributed to hear stroke since he liked to exercise in balmy conditions. Been doing that since playing football but all of a sudden it’s death inducing.

You got it. Marion Barber, they called him the Barbarian. Selected for the 2007 Pro Bowl when he racked up 1257 yards from scrimmage for the Cowboys. Dead at 38.
Heat stroke, my but, #ABV