READING — A 28-year-old small business owner and artist is wondering if her life will ever be the same; and just hopes she can get “a little of it back.”

Ms. Katrina Hermez received her first Pfizer mRNA injection on June 27, according to her Instagram page. She only received the shot because she “believed [it] would protect us and the people around us.” Ms. Hermez also said the government made everyone believe that it was the correct thing to do. Now she admits the foregoing are “proven lies.”

The adverse reactions started on July 2 with skin rashes and memory fog. Episodic memory loss came next. Ms. Hermez recalls taking a walk that day. But after 30 minutes, she had no idea where she was or why she was out walking. Ms. Hermez described another episode when she was paying for goods at a shopping center and talking to the cashier. Ten minutes later, she had no idea where she was or who the cashier was. Then she described a conversation with her dad that she could not recall just hours later. 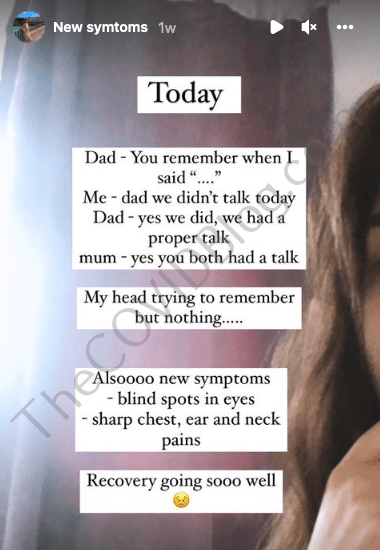 The condition is called anterograde amnesia. It is typically caused by some sort of brain damage. A severe case was portrayed by the character “10 second Tom” in the Adam Sandler/Drew Barrymore comedy film “50 First Dates.”

Dr. Wind Goodfriend wrote about a British man named Clive Wearing. He was a real-life 10-second Tom who lost his entire family. They grew frustrated with him because Mr. Wearing could never remember who they were or recall any previous visits with them.

Ms. Hermez would probably be content if her symptoms were limited to the foregoing. But this was only the beginning.

A month later, Ms. Hermez described being hypersensitive and irritable over the smallest things. It affected relationships with friends and family. Ms. Hermez said the first of many seizures came in October. The following month, she was found on the floor by employees at work “completely paralyzed and unable to speak.”

Doctors first believed Ms. Hermez had a stroke or multiple sclerosis. But she was ultimately diagnosed with functional neurological disorder. She spent a week in the hospital before being discharged. 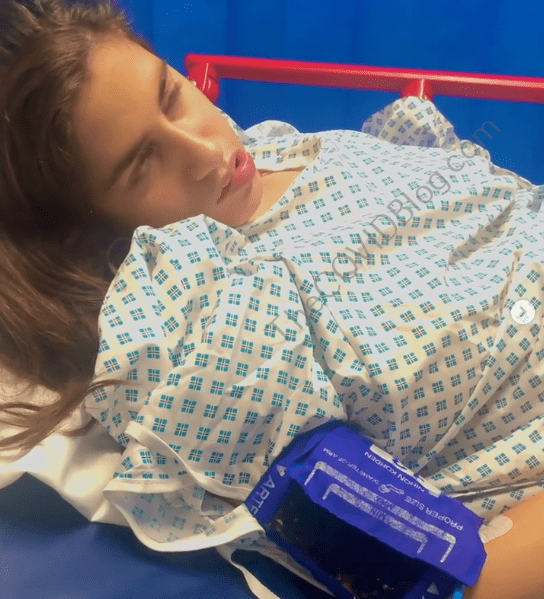 From that point forward, Ms. Hermez has been unable to move around without a cane, walker, or wheelchair. She can no longer leave the house without someone’s help. Ms. Hermez said she’s had at least eight episodes where friends or family find her collapsed on the floor, and she doesn’t remember what happened.

Ms. Hermez kept quiet about her condition until last month. She first made it all public on January 14, when she posted a link to her GoFundMe page.

A week later, on January 20, she posted another Instagram update. Ms. Hermez described even more symptoms, including speech issues, daily migraine headaches, blood in her ears, vertigo and nausea. 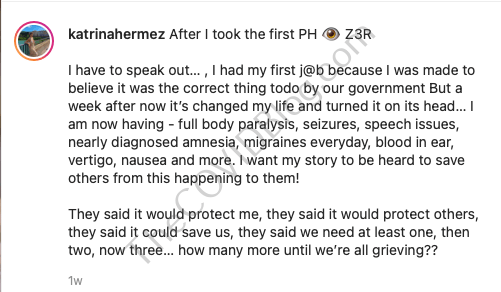 Her update yesterday sounds very familiar to this blogger. Ms. Hermez said doctors cannot and will not help her, for fear of losing their jobs. She also sent a message to all the trolls and vaxx zealots who think she’s lying or it’s all in her head. 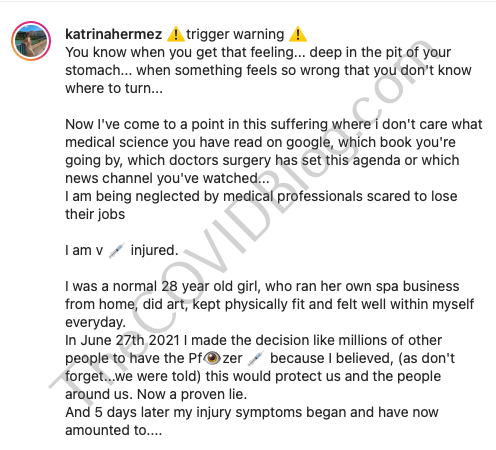 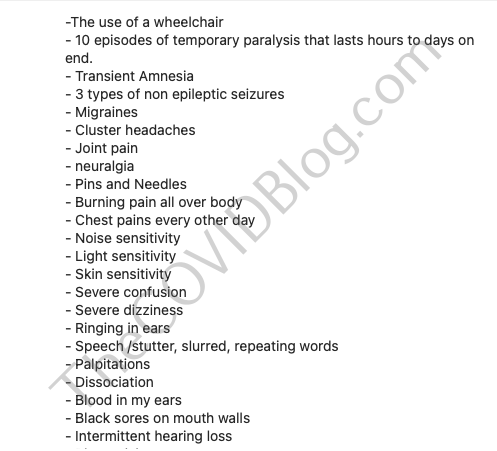 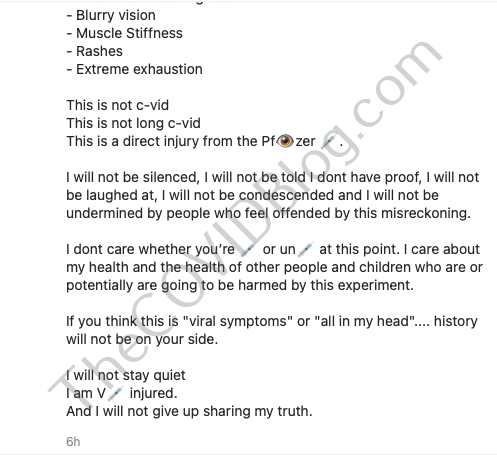 Ms. Hermez said the goal of the GoFundMe campaign is to see Dr. Mark Ghalili in Los Angeles. This is at least the third time Dr. Ghalili has been mentioned on this blog, as the vaxx-injured continue flocking to him. But she fears that a 14-hour flight from the U.K. to California will be extremely difficult, if not impossible. We’ll update this story in due course.

Did the EU quietly force Europe to end COVID restrictions?

Denmark became the first European country to lift all COVID-19 restrictions yesterday, including eliminating vaccine passports. England lifted most restrictions on January 27. Ireland and France are also relaxing restrictions. You have to wonder why all this is happening so suddenly. The answer may lie in a recent changed in European Union policies.

The EU quietly began enforcing Regulation No. 536/2014 on January 31, 2022. It appears the regulation was enacted in 2014, but has not been enforced as it relates to COVID-19 “vaccines.” There are three very important provisions in said regulation that may explain all the sudden freedoms across Europe.

During a clinical trial, the rights, safety, dignity and well-being of the participants, as well as the reliability and robustness of the data obtained, should be guaranteed. The interest of the participants should always prevail over any other interest.

A clinical trial should be subject to prior authorization so that compliance with these principles can be independently monitored.

The Member States concerned should cooperate in the evaluation of applications for authorization of clinical trials. This cooperation should not include elements of an intrinsically national nature, such as informed consent.

Of course all of the experimental injections are still in clinical trials through 2023 in some cases. This regulation is also the first time on this blog we’ve documented a Western government entity acknowledging the principle of informed consent.

Push back against COVID-19 dystopia is getting more pronounced across the globe, from the Canadian truckers protest to the weekly protests in Germany. The CDC, big pharma and mainstream media are also losing ground in the information war. The Biden Administration is blatantly calling for censorship of truth that hurts their propaganda narratives. They are feeling the heat for sure.

Perhaps these people sense that there is enough global dissidence to force another Nuremberg-type situation related to these “vaccines,” and are doing whatever possible to mitigate the damage. Only time will tell. Stay vigilant and protect your friends and loved ones.

Media censorship must end in order for there to informed consent.

I have to admit I laughed at the absurd appropriateness of spelling Pfizer with the eye.

I really wish people would stop saying ‘my truth’. Something is either factual or not. Her injuries are facts despite all the gaslighting by the white coat terrorists and anti-truthers. She must say she is sharing facts. Women are more susceptible to neurological conditions post jab.

Rebecca
Reply to  Holding On

That’s what I thought too. I hate the phrase “my truth.” We should say we’re sharing our experiences.

They are probably doing the pullback because enough damage has been done and they can claim plausible deniability. Society will collapse because of the many coming deaths from the sht.

Yeah, they have jabbed enough idiots. Now just crank up the 5G and watch them drop like flies.

i don’t think they of sudden relent is out of good will. My guess is because the goal has reached (some countries have 80% – 90% vaxx rate) or they’re switching to a different strategy. Tyrants would not give up power & control so easily!

I also thought it highly unusual that the UK would just stop all the mandates so quickly out of nowhere. It made me wonder if: 1.) They are on a timeline we are all unaware of and this is the next logical step in their agenda. 2.) We are going to war soon and they have done enough damage to their citizens for now. 3.) They know we are all on to them and not enough have been vaxed so they have to pull back to claim ignorance and throw a few higher up people under the bus. No sure if its even any of those suggestions. Time will tell.

Big mystery to me as well. One thing for sure its business as usual where I am at in Southeast Asia. Still masks on, un-injected banned from indoor dining and regular jobs, and those who were double-injected will have their green pass expire by February 14th, unless they get the booster. Because Asian culture generally makes good government ass-lickers out of people who are born into it.

They’re not stopped by the government. Officially they’re being reviewed. Regardless most businesses and corporations will force the injections as condition of employment or hiring.

Clearly they have enough jabbed already. UK people went voluntarily as fast as any nation to get the injections.

I wish this young lady well and hope she gets to LA to see this doctor. Another tragic tale of a young healthy person that didn’t do her homework on this injection. Six months later she finally acknowledges she was deceived by her government and the trusted institutions that are controlling this fiasco. She is a willing participant and her compliant actions have brought hardship for those of us who refused to take part in the human trials of an experimental drug program. Ms. Hermez received her injection in June at a time where the truth about these injections was far and wide on the internet. Many others escaped the lie by simply educating themselves and refusing to cooperate in this madness. This resulted in loss of jobs as well as being excluded from society and even being denied life saving medical treatment. She believed it would protect her and those around her. Now even her trusted doctors are not interested in helping her because it would be a professional and financial loss for them. Well ma’am, welcome to the harsh reality of a cruel world.
I don’t wish to kick a person when they are down, but I do hope she realizes personal responsibility along with being lied to, resulted in her tragic condition. I pray for God’s healing power for Ms. Hermez and hope she gets the help she needs. This same scenario seems to be repeated daily and I pray for all those that have been injured or killed by this nightmare.

Her GoFundMe page states she needs £15000 (or 15000 dollars) for 5 days’ treatment!
All I can say is I hope Dr. Ghalili proves value for money!
At 3000 dollars/pounds a day, he certainly doesn’t come cheap!
Some might say excessive; others (like me) exorbitant.
However, I wish Katrina all the very best and hope she can raise the necessary funds and recover fully, by God’s will. Ameen

“Ms. Hermez said doctors cannot and will not help her, for fear of losing their jobs” That is a frightening statement.

Scary story… the look in her face in the image is frightening and what our ancestors would call demonic possession.

Does this blog have a general consensus on what is actually inside these injections? I know graphene hydroxide razor blades one atom thickness cut up all blood cells, tissues, brain cells, lungs, etc. However it is also possible there is some nanotechnology which has migrated to the brain causing the amnesia. This could coincide with forced 5G and soon 6G rollout around the US and world. It sounds far fetched, sure, but so did the whole idea of a “plandemic” to most people two years ago who went like sheep to the slaughterhouse.

I and God bless you to make available all these informations online.
Thank you very much!