India is turning out to be one of the most sensible, common sense countries in the world since the most powerful human psychological operation (“COVID-19 pandemic”) in history commenced in 2020. There are at least nine COVID-19 “vaccines” authorized for emergency use in India as of publishing this article. But the lethal, ubiquitous Pfizer mRNA injections are not one of them.

India’s Central Drugs Standard Control Organization (CDSCO) rejected Pfizer’s application for emergency use authorization way back in February 2021. CDSCO cited adverse reaction reports and better locally-manufactured options for “vaccines.” Pfizer also demanded an indemnity clause, shielding it from liability if anyone was killed or injured by the shots. India rejected those demands as well. Moderna was also rejected by India. Thus very few Indians have received mRNA injections throughout the so-called pandemic.

Meanwhile, the petulant, malevolent American medical establishment continually refers to the Nobel Prize-winning drug Ivermectin as “horse de-wormer.” India started giving its citizens Ivermectin in May 2021 when so-called COVID-19 cases were sharply rising. Just two weeks after the Ivermectin campaign began, COVID cases plummeted. Uttar Pradesh, the most populous state in India, has been virtually COVID-free since 2021 due to wide Ivermectin and hydroxychloroquine use.

But India is no saint among snakes during The Great Reset. The country is 64% fully-vaccinated as of June 3.  A vast majority of said vaccine recipients received two doses of Covishield, which is the India-produced version of AstraZeneca viral vector DNA injections. The Serum Institute of India manufactures Covishield. Most remaining vaccinated Indian citizens received two doses of Covaxin. The “inactivated virus” Covaxin injections are produced by Hyderabad-based Bharat Biotech.

Further, India is notorious for using celebrities as pitch people for the lethal injections. Ms. Anju Ghangurde, executive editor of Scrip Intelligence, published an analysis in March measuring the actual impact of celebrity endorsements of  “vaccines.” The incentive is far too great for celebs to pass up. Indian cricketers command fees exceeding $2 million (INR 155,200,000) to perform vaccine propaganda campaigns, according to Ms. Ghangurde.

She conceded that measuring return on investment for such campaigns is complex. But that doesn’t stop GlaxoSmithKline, which merged healthcare arms with Pfizer in 2018, from paying cricketer Mahendra Singh “MS” Dhoni millions to endorse “six-in-one” vaccines for all babies born in India.

Granted one late 2020 survey found that more than three-quarters of Indians said they would receive injections as soon as they became available. But celebrity endorsements nudged many of the previously “hesitant” enough for them to roll up their sleeves too. Now both the celebrities and the Indian populace are paying the price. 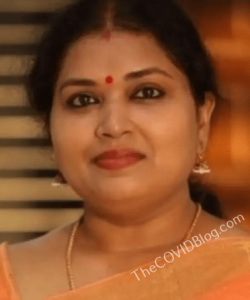 Ms. Sangeetha Sajith was a playback singer and resident of Thiruvananthapuram, Kerala. Note, a playback singer is one who sings a song behind the scenes, then someone else lip syncs it for a movie or other performance. India apparently respects said profession, unlike in the United States. For instance, French model Katrin Quinol is portrayed as singing the 1990 Black Box house hit “Everybody, Everybody” in the music video. But former disco and R&B singer Martha Wash actually sang the song, and was given no credit or royalties.

Ms. Sajith performed at the Tamil Nadu State Film awards at age 15 in 1992. She was also a playback singer in the Tamil movie Naalaiya Theerpu by SA Chandrasekhar that same year. Ms. Sajith is credited with recording 200 more songs in four languages since that time. She is best known, according to The Hindu, for the song “Thanneerai Kathalikkum,” which was featured in the 1996 movie Mr. Romeo. Some other well-known works by Ms. Sajith include “Kakkakuyil” (2001), “Rakkilipattu” (2007), and “Odathandil Thalam Kottum” (2009). Most of her biggest hits were part of Tamil movies.

Ms. Sajith was reportedly admitted to an intensive care unit on April 26 with some sort of kidney ailment. Her condition improved to the point that she was singing from her hospital bed. But she passed away at her sister’s home on Sunday, May 22. The cause of death is being reported as kidney failure.

There’s no definitive evidence that Ms. Sajith received the injections. But we know India is a big fan of Remdesivir, the anti-viral COVID-19 treatment by Gilead Sciences. Several studies point to Remdesivir causing acute kidney failure. 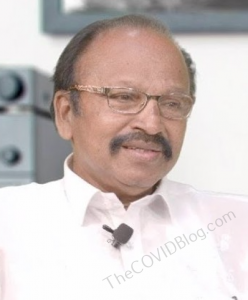 The Tiffany Dover incident in December 2020 is now a common theme. It’s almost impossible to go a full week without hearing about and seeing yet another similar case.

Mr. Evada Basheer is a Thiruvananthapuram native and long-time international singer. His career dates back to 1972, when he started the music troupe (group) Kollam Sangeethalaya Ganamela. His playback singing career in films launched in 1978 with the song “Veena Vaayikkum” in the Adoor Bhasi film Raghuvamshami. Mr. Basheer is best known for his songs in Malayalam movies and his live performances not only across India, but also in Europe, The Middle East, and United States.

Mr. Basheer was performing in the coastal village of Pathirappally, Alappuzha district, Kerala on May 28. The event was celebrating the 50th anniversary of the Blue Diamond Orchestra. He was performing the song “Maana Ho Tum Behad Haseen” from the 1978 Hindi film Toote Toys. Mr. Basheer’s knees buckled during the performance, before he completely collapsed to the ground. Watch the video below.

He was rushed to a nearby hospital, but was pronounced dead on arrival. There’s no definitive evidence showing that Mr. Basheer received the injections. Mainstream media are also not providing their cause of death. But again, we’ve seen this over and over again. 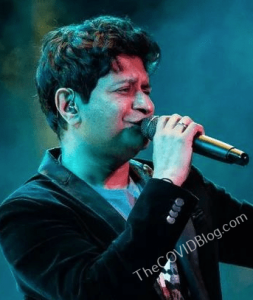 Mr. Krishnakumar Kunnath, known as “KK” to his fans, is also a playback singer. He has recorded songs in at least 10 languages over his 30 year career. The South Delhi native graduated from Kirori Mal College with a degree in marketing. He married his wife and childhood sweetheart, Jyothy, around that same time. Despite having no formal music training, KK wanted nothing more than to perform on stage. He quit his post-college job as a typewriter salesman after six months to pursue music. The rest is history.

KK started out singing in hotels, before moving to Mumbai in 1994. He sang and recorded over 3,000 jingles in his career. But his big Bollywood break came in the 1999 musical drama Hum Dil De Chuke Sanam. KK sang the first two lines of the song “Tadap Tadap,” which was featured in the film. His first album, Pal, was released in 1999. Humsafar, his second album, was released in 2008. He’s also known for several television appearances. Despite playback singing being his bread and butter, KK said he also enjoyed live performances so he could connect with his audience.

KK performed one of said live concerts at the Nazrul Mancha in Kolkata on Tuesday, May 31. He shared video clips of his performance earlier that day on Instagram. 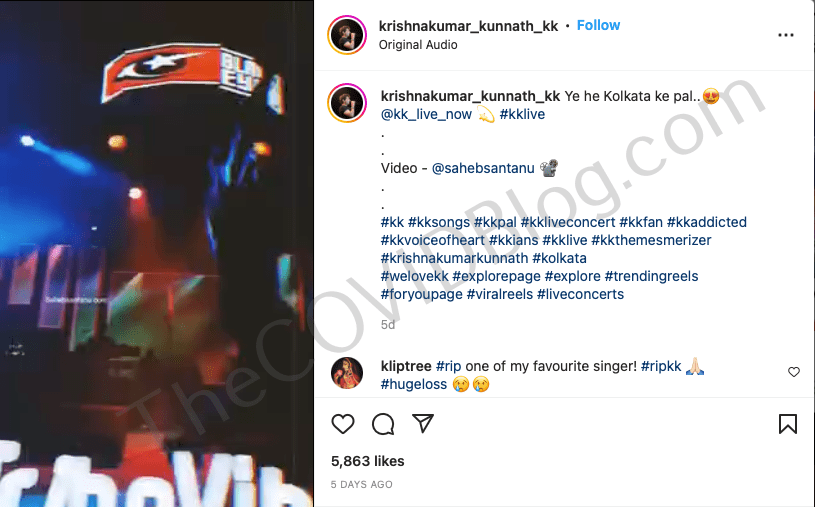 Some reports say he “seemed uneasy” after the concert. KK returned to his hotel in the Esplanade neighborhood of Kolkata after the performance that evening. He immediately collapsed upon entering his hotel. KK was rushed to the hospital, but pronounced dead on arrival. The cause of death was “massive cardiac arrest.” Mainstream media are blaming chronic liver and lung conditions for KK’s cardiac arrest.

What’s next for India?

The India Supreme Court gave the non-vaccinated a nod of support at the beginning of May. Mr. Jacob Puliyel filed a petition arguing that vaccine mandates for state benefits and other routine norms were unconstitutional. The Court ruled that, “bodily integrity is protected under the law and nobody can be forced to be vaccinated.” The ruling also directed the government to publish any and all adverse effect reports and clinical trial data related to the injections.

The ruling’s semantics are troubling not only for India, but for the world at-large. Technically in the United States, nobody has been “forced” to receive injections, meaning nobody had a gun to their head or other threats of imminent bodily harm if they refused the injections. Ultimately, if and when any Nuremberg-type trials happen for the Fauci’s, Gates, Schwabs, Trudeau’s, etc. of the world, they are likely to fall back on the definitions of “forced” versus “persuaded.”

Again, Covishield is by far the most-used “vaccine” in India. It is also just rebranded AstraZeneca. Those injections are the most deadly of them all, followed by Johnson & Johnson. Our coverage over the last 17 months shows a lot more fast and relatively-fast deaths from the viral vector DNA shots versus the mRNA shots. Blood clots are pretty much inevitable after the viral vector DNA injections.

Of course the mRNA shots can kill quickly and cause blood clots too. But based on the growing database of evidence, Pfizer and Moderna aim to kill slowly. AstraZeneca (Covishield) and J&J wanted the same. But their formulas, as we’ve seen in these real-time, unwitting global clinical trials, are extremely toxic. That’s why you rarely hear about J&J in the U.S. anymore. The vaccine genocide agenda would be too obvious if J&J was still widely used in the U.S.

The India Supreme Court ruling, and the country’s willingness to utilize Ivermectin and hydroxychloroquine, means non-vaccinated Indians should be able to stay that way and live a fairly normal life. But the (severe) damage is already done to at least 60% of Indians. India’s population doubled from 1966 to 1997, and surpassed one billion people for the first time that year. Today the country has 1.4 billion people. Don’t be surprised if India drops back to pre-1997 population levels in the next 2-3 years thanks to Covishield (AstraZeneca).

Who would have thought that singing can be as dangerous as playing soccer.

When you think about it, it does put stress on the heart and lungs, moreso than just talking. Ever try to sing opera? I have while washing dishes! It is a load. Really. Also it has been called “voice abuse” in medical reports – because it is.

Yes – it’s obvious – all singers should have their hearts checked immediately.

I also believe Bappi Lahiri, legendary playback singer Lata Mangeshkar and producer Shravan Rathod (of Nadeem-Shravan) all died from the jab. Certainly it was reported the former two had Covid complications after having the jab. All three certainly made their mark in the Hindi film music industry. Mangeshkar did playback for several actresses from the 1940s all the way to the 1990s and is considered the finest singer from India ever. Lahiri introduced disco elements into Hindi film soundtracks and was an excellent singer himself although courted controversy due to his love of “bling”. His Gothic-themed opening credits composition for the 1988 film Khooni Murda was so good he should have been commissioned to do the soundtrack for Nightmare On Elm Street!!

It is difficult to pass thru the eye of a needle…