HOLLYWOOD — Not a week goes by anymore without some Hollywood or mainstream media personality falling victim to their own virtue signaling. Some of these stories are so bizarre, that we actually wait a few days for the dust to settle to ensure it’s true. The entire COVID-19 narrative is crumbling. And the powers-that-be need their high-paid minions to get things back on track.

Radio host Howard Stern was the epitome of anti-establishment for most of his career. This blogger entered radio broadcasting as a teenager in the mid-1990s when Stern owned terrestrial radio. All of us young hopefuls wanted to be like Howard. Admiration for him, however, ceased in May 1999. Stern essentially killed former Diff’rent Strokes actress Dana Plato (“Kimberly Drummond”) by humiliating her on live radio, leading to her suicide the very next day. But the 2022 version of Howard Stern is reminiscent of former Sex In The City actor Willie Garson.

Stern constantly brags about being triple-vaxxed. He received his first two injections by April 2021. And just like Garson and many others on this blog, Stern morphed into a vile vaxx zealot, spewing non-stop hatred for the non-vaccinated. On his January 19 Sirius XM show, Stern said, among other things:

“I’ve taken this vaccine three times, and the worst side effect is for a day, I had a little bit of a headache. No one’s sitting there conspiring against you. Americans don’t want to create a vaccine that’s going to turn you into a robot or magnetize you. Now, if you don’t get it, in my America, all hospitals would be closed to you. You’re going to go home and die. That is what you should get. Absolutely.”

Stern, in September, called the non-vaccinated “imbeciles” and told them “fuck your freedom.” It’s almost as if he’s willing karma to take over.

Some instant karma took place this past week. But it was so incredibly crazy that we held off writing about it until there was visual proof.

Mrs. Heather McDonald is best known for her roles in the late night talk show Chelsea Lately, starring Chelsea Handler. More on that in a bit. Mrs. McDonald is a New York Times best-selling author, comedy writer and podcaster. The 51-year-old wife and mother-of-three also does standup comedy, which is where the story picks up.

Mrs. McDonald was doing a standup routine at the Tempe Improv Comedy Theater (Arizona) this past Saturday. Reports said she was telling a joke about being fully-vaccinated, boosted, that she still has her period, and Jesus loves her. It was then reported that a few second later, she collapsed on stage. The story was just too wild to believe. If it doesn’t happen on camera, it didn’t happen in the 21st century.

The Tempe Improv has a no-camera/no smartphone policy. So the only way we were ever going to see video proof is if Mrs. McDonald posted the video herself. And she did just that yesterday on Instagram.

Mrs. McDonald took to Instagram from the hospital, right after the collapse, to apologize to her fans.

Her team posted an update on Facebook shortly thereafter. 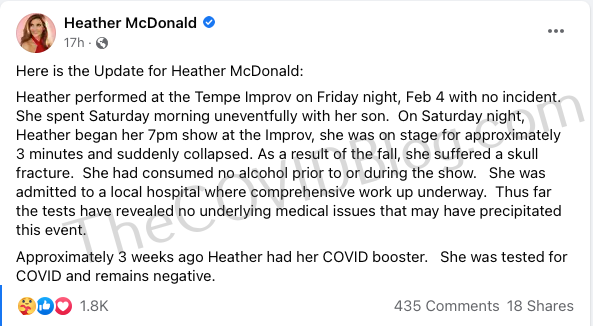 She was released from St. Joseph’s Hospital in Phoenix yesterday. Mrs. McDonald suffered a skull fracture as a result of the fall. Doctors provided lame excuses like dehydration and lack of food for the fall.

UPDATED February 13, 2022 – Heather McDonald confirmed with Dr. Drew that she had two Pfizer shots and a Moderna booster three weeks before she collapsed on stage.

Dr. Drew said he wanted to confirm she had no signs of myocarditis. Ms. McDonald didn’t even know what myocarditis, showing just how disconnected she is from facts and reality. She then told Dr. Drew, “I don’t think I’m going to get the fourth booster.” Good for her, but too little too late.

Chelsea Handler out of the hospital

Ms. Handler told her four million-plus Instagram followers that the February 4 and 5 shows in Oregon were cancelled due to “unforeseen circumstances.” 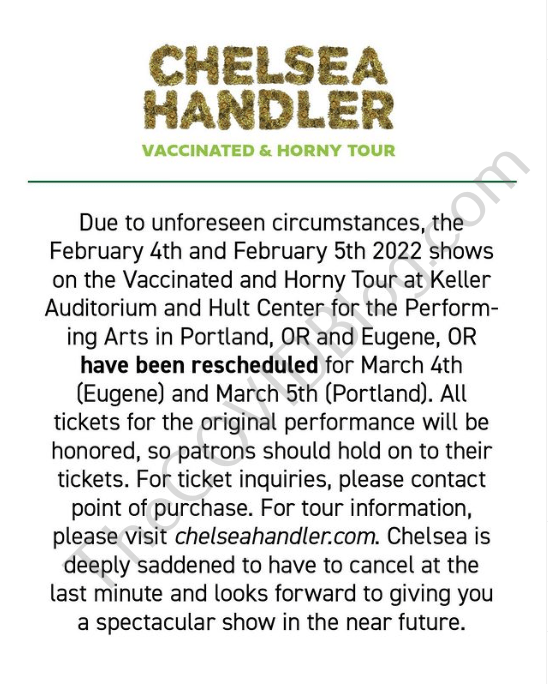 She was hospitalized last Friday with a “health scare.” Ms. Handler posted an Instagram story from her hospital bed that night.

She was released from the hospital over the weekend, and said she’ll “be back on track in no time.” Most remember that Ms. Handler posted an Instagram update on May 13, announcing her second Moderna injection. She nervously revealed that she was deaf in one ear after the shot, and she “feels sick.”

It’s unclear if Ms. Handler received a booster shot. But, you know.

We wrote about British pop star Adele postponing her Las Vegas shows due to half of her fully-vaccinated crew having COVID-19. Fans paid upwards of $35,000 per ticket, plus lodging and travel. But Adele and Las Vegas power brokers tried to soothe the anger by offering fans free tickets to an Adele impersonator show. It’s still unclear when Adele will start her Vegas residency, or if her fans are waking up to the truth about this so-called pandemic and the injections.

It seems every week, there is another celebrity story on The COVID Blog. Doctors and celebrities are the primary pushers of the experimental injections. And they’re also going down at higher rates than the general public.

RELATED: Chickens keep coming home to roost as 5 more young doctors die unexpectedly, including another one in a private plane crash (February 5, 2022)

The Heather McDonald story is by far the most eerie we’ve written here. Plus these two women worked together so much, for so long, and went down on the same weekend. Perhaps these two examples will get the attention of Howard Stern and others. Virtue signaling never turns out well.  Get your shots, be happy and be quiet.

Lets face it, this is the most memorable joke that Ms McDonald will ever tell in her life!
Kafka would be so proud of her commitment to the craft.

“Mrs. McDonald suffered a skull fracture as a result of the fall.”

ha ha ha…both of these females are so funny (yawn). Seriously, is the floor stage ok ?.

Sometimes the jokes write themselves

The knock on Heather’s head won’t knock sense in to her. Chelsea has been a lost cause for years. Howard is a loser. All 3 are examples of what not to do, be or act like. Hollyweirdos.

Wow, Jesus clearly was not joking around!!! It probably won’t put her on the right path but maybe someone in the audience got set straight that night. Don’t take the Lords name in vain.

New is that Bob Saget died from head injury that he ignored and went to bed with. They will probably never admit that his head trauma was due to a fall caused by the vaccine. I also know someone who strangely pitched forward resulting in a concussion who will forever deny that her dizziness and instability could be caused by the vaccine she received.

People who collapse from the jab don’t faint normally, they fall over like trees. it’s so weird.

I actually clicked the link to Dana Plato because I didn’t know the story. Grew-up watching Different Strokes. What a disgusting story to add to the absolute filth that is Howard Stern. Back then no one would have believed that it may have been Dana was abusing herself bc she herself had been abused in H-wood by the predatory pedos. Poor girl. May she RIP and Howard burn in Hell.

And no one has shrieked for Howard to be canceled, yet they’re all over Joe Rogan.

stern is part of the tribe – go figure

Next time Heather does that bit, she needs to add “…blood clots, fainting spells…”
She’ll keep telling herself it’s nothing, not vax related…but deep down, the question will gnaw at her. She’ll secretly Google vaccine side effects and find The COVID Blog…

The Lord works in mysterious ways…yes, really! I like to think it’s Him telling us; don’t worry, I got this!

Wow… Just wow. To faint so soon after that statement.

I haven’t laughed this hard in quite a while. Every one of my liberal co-workers swear it was staged, until they see her in the ER with a busted head. A simply priceless video!

Satan takes care of those doing his bidding, he is taking care of Stern until he no longer needs him…..

The comedy skanks having some immune system problems huh. Well bless their hearts.

Stern is and always has been a vile and grotesque individual…as well as his cronies in hollyweird. Leave America alone, slimeball 🖕

I agree. I have always viewed him as a vile, slimy character and I never understood how or why he was so successful as a radio broadcaster.

Dr. Drew get paid or what? on one hand, he warned her about myocarditis & fainting, then also said booster is worth it?

Well, a lot of people who walk with God have probably been praying like me for Him to intervene. All I know is He never ignores me. Sometimes I just have to wait a bit.

Amazing how people world wide don’t mind being Guinea Pigs to be experimented on to prove a point whose real point is you’re getting stuff injected into your body that’s experimental. Same kind of crap I went through as I was being processed into the military. You’re gonna get a bunch of shots so role up your sleeves. We did what we were told & got the shots. Think a bunch of 18-19 yr olds knew anything more than that? Nope! COVID shots & boosters today? Ummmm, nope! Cool thing too, you can still get COVID after getting the shots. How lucky are we???

I don’t like to celebrate any of this but if Howard Stern croaked I would laugh. He is a completely deplorable individual who has exploited and abused people for money. He also wished death on the unjabbed so eff him.

Dr drew Sucks! He literally said, “it’s still worth doing it (vax)” even tho she fractured her skull, and no one knows long term affects!!!! Then he went on to ask about her heart, but it’s still worth it??? a diease with a 99% recovery rate is worth a shot that causes heart problems and falls leading to skull fracture or worse??? Also, note how the comediene blasphemed Jesus right before she fell? Coincidence?