NEW DELHI — Twenty-something Twitter employees with Starbucks lattes are now the authorities in law and science versus respected, long-time attorneys who have fought corruption their entire lives.

Mr. Prashant Bhushan is an Advocate-on-Record for the Supreme Court of India. He is one of few people allowed by law to plead for or against litigants before the country’s highest court. Mr. Bhushan could have made millions working as a corporate or civil lawyer. But instead he has worked as a human rights attorney helping those most in need. Mr. Bhushan’s distinguished career has led to 2.1 million Twitter followers and an engaged, international audience. Twitter did not get the memo.

The meta-analysis “Facemasks in the COVID-19 era: A health hypothesis” was published in the peer-reviewed journal Medical Hypotheses in November. Science Direct re-published the article in January. In other words, it isn’t even a “new” study, per se. Dr. Baruch Vainshelboim of the Cardiology Division, Veterans Affairs Palo Alto Health Care System/Stanford University, authored the study.

Mr. Bhushan tweeted about the meta-analysis on April 10. 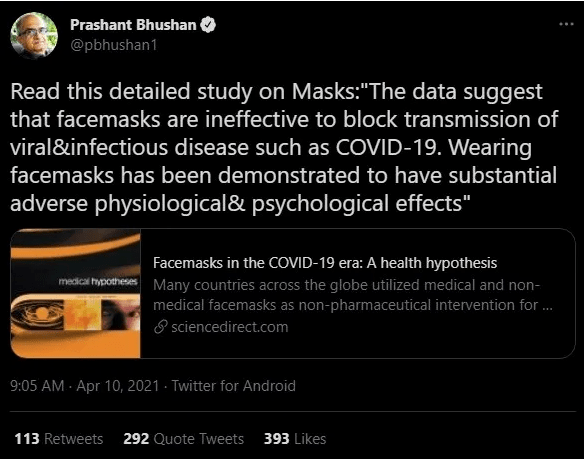 What does the study say?

We’ve added this meta-analysis to the aforementioned Truth About Masks page. It is an interesting read, particularly for those fighting mask mandates in the courts. The conclusion sums up the findings nicely.

The data suggest that both medical and non-medical facemasks are ineffective to block human-to-human transmission of viral and infectious disease such SARS-CoV-2 and COVID-19, supporting against the usage of facemasks. Wearing facemasks has been demonstrated to have substantial adverse physiological and psychological effects. These include hypoxia, hypercapnia, shortness of breath, increased acidity and toxicity, activation of fear and stress response, rise in stress hormones, immunosuppression, fatigue, headaches, decline in cognitive performance, predisposition for viral and infectious illnesses, chronic stress, anxiety and depression.

This table from the meta-analysis also sums up the data in an easy-to-read fashion. 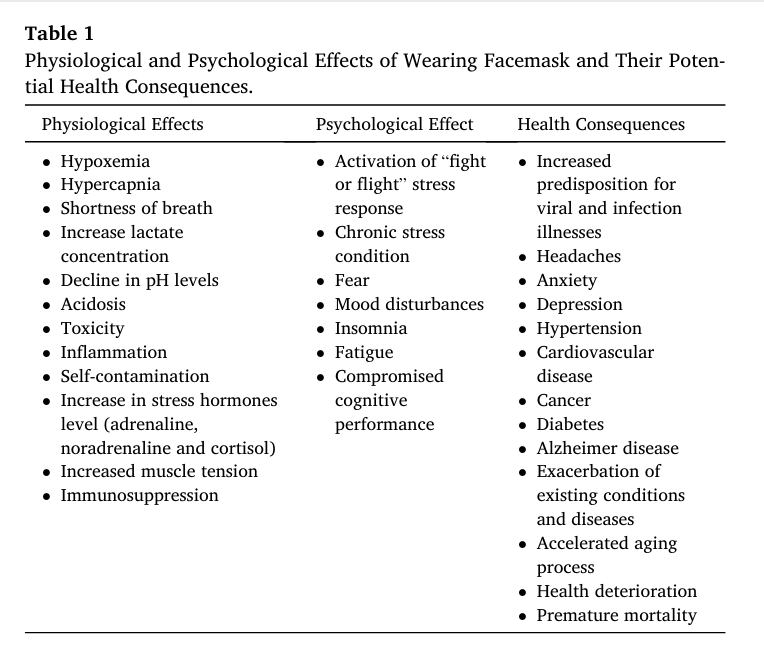 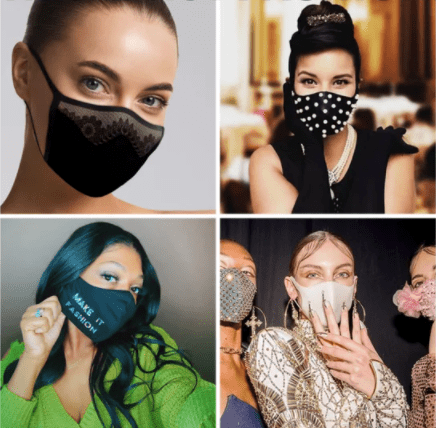 Masks are fashionable, political symbols for doomers, Fauci worshipers, or whatever you want to call them. Many people have become so conditioned that they love their masks whether COVID-19 exists or not. There are mask kiosks in malls across the country.

There is also a store called “COVID-19 Essentials” that is showing up in malls. Surrealism is unlimited in the COVID-19 era.

Masks do absolutely nothing to stop the spread of viruses. They are nothing more than control mechanisms. That is a fact and no amount of Fauci-isms change that fact. You’re only hurting yourself by wearing masks hours at a time every day.

Stay vigilant and protect the only thing you can control – your health.

Wow. As an attorney, I am so sick of this. Where I we go from here? I need a roadmap and more grit. We need to stand up.

Molly, there are many lawyers taking up the flag and doing their best to push back.
I refer to Proverbs 24:6. Our war will be waged by the “wise counsel” stepping forward to represent us. That would be you. Our victory will be in “multiple counsellors” – that’s you and your lawyer friends coming together to present the People’s Case in a Court of Law. That’s where we win. But you’re right. It’s going to take Grit. Know this: Any steps you take on behalf of the People will fill your life with our eternal gratitude.

We read these stories and make the assumption that Twitter will, eventually, go too far and the regulators we’ve put into place to avoid this kind of thing will spring into action and save the day, only to be disappointed time and time again. I have been personally banned from Twitter which puts me in good company with lots of other folks trying to speak the truth, and no less than the President of the United States of America, for Pete’s Sake. There are other platforms. We need to populate them with both our presence and our research findings. I will post this article link on Gab. There’s more than one way to skin a cat. Keep talking!! Find a venue!

Prashant Bhusan who was with Kejriwal?
There is a difference between 100 percent effective and a strong different
Would he have a better solution?