PALA, KERALA — A 31-year-old pregnant woman is dead after doctor’s orders to accept her own slaughter.

Ms. Mahima Mathew received the first experimental Covishield viral vector DNA injection on August 6, according to the Kerala Kaumudi. Covishield and Vaxzevria are two other brand names for the AstraZeneca injections, similar to Comirnaty and Pfizer.  A Pala gynecologist recommended she receive the injection despite also learning she was seven-weeks pregnant that day.

Five days later, August 11, Ms. Mathew suffered debilitating headaches. She went back to the same Pala hospital that day. Doctors gave her pain killers and antacids before sending her home. Ms. Mathew was back in the hospital on August 15 when her condition worsened. She was declared brain dead the next day and officially deceased on August 20.

A post-death examination revealed Ms. Mathew suffered from a brain hemorrhage. Her death certificate says she “may have” died as a result of the AstraZeneca injection. The news was exacerbated by two more women’s deaths after experimental injections that week. Ms. Divya Nair received her first Covishield/AstraZeneca injection on August 2. The 38-year-old suffered brain bleeding and died August 22.

A 21-year-old woman called Renjitha of Vavadukkam received her first Covishield/AstraZeneca injection on August 3. She developed blood clots in her brain and died on August 25.

India is one of the most practical and, for lack of better term, refreshing countries in the world as it relates to COVID-19 and these injections. The India Supreme Court ruled that direct or indirect “vaccine” coercion is unconstitutional. The Court also ruled that any doctors and/or police that force anyone to get the injections against their wills can and will be prosecuted. If anyone dies as a result of forced vaccination or uninformed consent, the administrating doctor will be charged with murder. 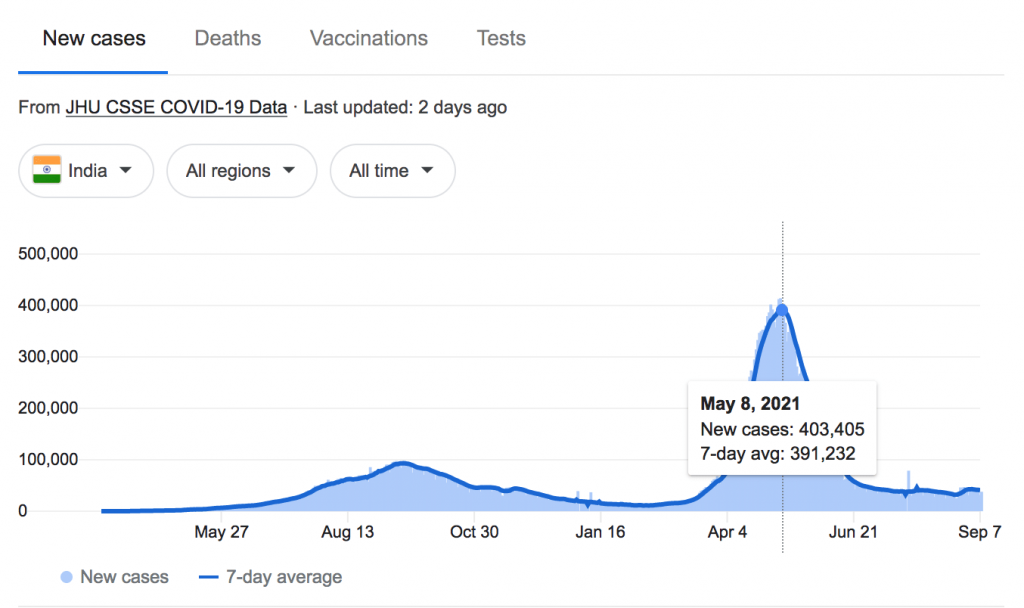 The states of Uttar Pradesh and Bihar have the lowest COVID-19 death rates in the country. Both have been giving people free Ivermectin since 2020. There is no rational reason for any Indian to poison themselves with the experimental shots with such rational high court and health authorities on their sides. Meanwhile United States media and health authorities continue their childish, petulant attacks on Ivermectin, calling it “horse de-wormer” and other silly thing.

The new Texas abortion law is once again confusing liberal vaxx zealots. It’s also producing humorous irony. Texas outlawed all abortions after six weeks. The U.S. Supreme Court upheld the law last week. The New York Times published an article on September 7 urging the Biden Administration to fight back against the law. The photo for the article is a bunch of young masked women at a protest, carrying signs that read “hands off my healthcare,” “my body, my choice,” etc. These are the same people who support mandatory experimental injections for all. Just a twilight zone world.

Meanwhile, pregnant women continue killing their babies with these experimental mRNA and viral vector DNA injections. Ms. Mathew is the first case we’ve covered where the woman and the baby died. We reported on June 21 that the Vaccine Adverse Event Reporting System (VAERS) had recorded 522 post-injection, spontaneous abortions. A little over two months later, through August 27, that number is 1,222 post-injection spontaneous abortions, a 134% increase in a little over eight weeks.

We’ve covered several stories of women losing their babies after the injections.

Granted this global genocide does not discriminate. All people are volunteering or being coerced into their slaughters. But these mRNA and viral vector DNA injections are looking more and more like a war on women, who are more likely than men to get the injections.

At least 65% of vaccine death and vaccine adverse reaction stories on this blog have female victims. Women are 70% of the global healthcare workforce and are 91% of nurses in the United States. The Wall Street Journal reported on Monday that women represent 60% of all college students in 2021. Healthcare workers and college students were/are the first and most likely people to face “vaccine mandates.”

Population control is the goal of the powers-that-be. A shortage of women will lead to even lower birth rates than the record lows last year. Battle line are drawn. Stay vigilant and protect your friends and loved ones.

Experimenting on pregnant women is one of the most depraved and diabolical actions in the history of humanity.

That’s exactly what I came here to say. As soon as I saw the headline, I didn’t even have to read the story (although I will).

They’re not experimenting with anything. They’re simply killing; a few instantly–the majority slowly. Don’t think that poison was developed in operation Wrap-Speed. It’s been in the making for years, waiting to be unleashed.

The Supreme Court or the US government are not responsible for the 65 million abortions in America. They only set the stage.

The only ones responsible for the abortions are the women who went into the abortion clinic and said “give me an abortion”.

No one is forced to get an abortion; it is very much a matter of choice!

﻿This is the worse ever I ever read!!!!! Humanity is totally DEAD in this generation. One of the reasons why am still single cause people nowadays don’t have mercy at all even pregnant is way too easy to killed with a baby in the womb? What the hell!!!

Es la verdad. I can read but not write well in Spanish. My thought today is, what will become of our next generation if they force this on our children? Will there be a next generation?

Early on in the “plandemic” (Psaki’s term not mine), men were more likely to have adverse events… So much so that doctors considered giving them estrogen as a form of treatment. The fact that more women are likely to get injected just showed that people don’t know how to do their own research.

Apparently we need our own death squads cuz the enemy certainly does.

Kerala is decoupled from the rest of India. Kerala has been following more stringent lockdown, and quarantine policies.

May she rest in peace–this is so sad, especially since it sounded like she still had a choice. Every emigrated Indian I know, here in the US has fully embraced the jab narrative. Some are very accomplished doctors who are so invested in the narrative, they have injecting their own children with this poison and demand everyone in the household wear masks. I do not understand the blatant trust for the government within that culture. What Gates did to that country with the administration of the Polio vaccine, should make every Indian across the globe abundantly distrustful of every medical procedure–especially if the decree is being supported/funded by that Kermit the Frog sounding demon.
This is yet another example of “Trust but Verify.” Take a day, learn about the other side of an issue before giving away your power. DO NOT CONSENT to this jab under any circumstance–for any job, social event, travel, school, family gathering, etc.. DO NOT listen to any “trusted” politician either (Trump and DeSantis are endorsing this poison)…HOLD THE LINE!!

The Jesuit order has taken over America a long time ago!

Jesuits are just Kabbalists in drag.

LOL!! They both love their wizards robes don’t they?

“For every thousand hacking at the branches of evil, only one is striking at it’s root”. – Henry David Thorough. Find the occult orgs and expose them all. Freemasons, Jesuits, Khazarian Jews, and more.

Yes. Everyone please watch “Europa, The Last Battle” documentary on Bitchute. You will learn much and know your enemy very well by the end. You will also be quite shaken.