Raam-Laxman was the name of a 1970s music duo. Vijay Patil was ‘Laxman, while his partner Surendra was Raam. Surendra passed away in 1976 almost immediately after the duo signed a contract with Rajshri Productions to compose the musical score in the 1977 movie “Agent Vinod.” Patil adopted the full stage name Raam Laxman (also spelled Raamlaxman and Ram Laxman) for the rest of his career.

Amar Patil, Laxman’s son, told the news agency that his father immediately felt weakness and general illness when he got home from receiving the shot. Doctors cared for Laxman at his Nagpur home. But the adverse effects were too much to overcome. Amar said Laxman died of a heart attack early Saturday morning. His cremation and last rites took place yesterday in Nagpur. Thus no autopsy will be performed.

Laxman’s career spanned four decades. He is best known for his work in the films “Hum Aapke Hai Kaun,” “Hum Saath Saath Hain,” and “Maine Pyar Kiya.” Laxman won the Filmfare Best Director Award for the latter movie. He composed music for at least 150 movies throughout his career.

Some of the biggest names in the industry paid tribute to the veteran film composer. 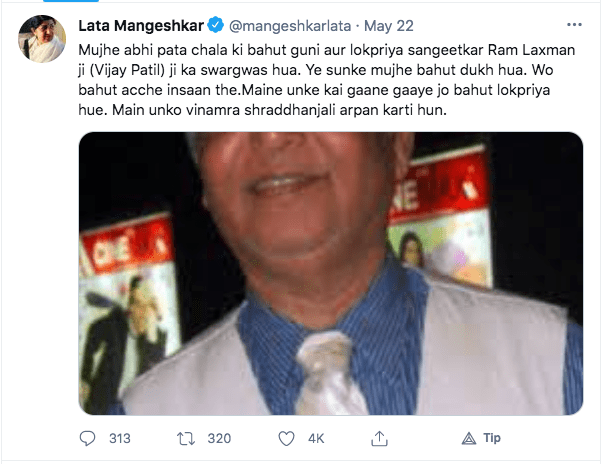 Lata Mangeshkar is a singer and music director whose career started in the 1940s when she was a teenager. Her tweet roughly translates to, “He was a very nice human being. I have worked with him on many songs which were very popular. I offer him my humble tribute.”

Celebrities are becoming sacrificial lambs in India. We wrote about actor and comedian Vivek last month. He died 48 hours after the Covaxin “inactivated virus” shot. Our article on India using hydroxychloroquine and Ivermectin, and watching COVID-19 cases plummet, prompted a pathetic “fact check” article from a mainstream media tool. Despite the mainstream disinformation, COVID-19 cases are still dropping in India as it continues using the foregoing proven, safe, effective treatments in most states. 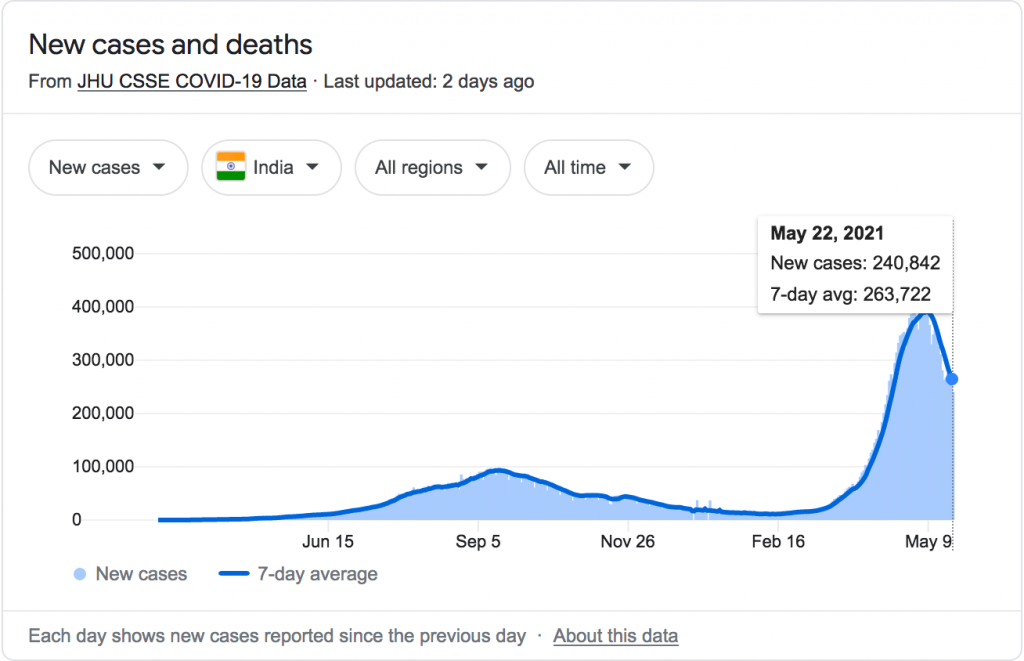 Of course mainstream media and big pharma are deflecting from this truth. They are focusing on the use of the word “Indian variant” instead of what hydroxychloroquine and Ivermectin are doing regardless of regular or super-charged COVID. There is mounting evidence that all of these so-called variants are coming from the experimental shots. We’ll be writing more on that this week.

At this point, the only people listening to mainstream media and big tech are their paid tools and the willfully ignorant. Do not apologize for sharing The COVID Blog. Do not qualify sharing it with caveats. We are the truth. You are the truth. Stay vigilant and protect your friends and loved ones.

Those “fact checks” are an utter abomination in every realm of human life.

Assuming; for argument’s sake; that they *were* actually trying to get to the facts and truth; they would still be an exercise in arrogance; as the notion that this one “fact check” person has cornered the market on All Truth; to the exclusion of all other opinions; is so absurd it is obscene.

But these “fact checkers” are not even seeking truth; they are paid corporate shills; that is Professional Liars.

Some of the ‘fact checker’ backgrounds turns out they were spending years working for the MSM. They are in nuts and bolts corporate shill presstitute media rebranding themselves as ‘fact checkers’ to get around the distrust.

These are part of the enemy war machine. A traitor behind the camera is still a traitor of the human race.