WASHINGTON, DC — The adage “the more things change, the more they stay the same” arguably dates back to Niccolò Machiavelli’s 1513 political treatise known as The Prince. Vilfredo Pareto’s 1901 book The Rise and Fall of the Elites (thank you Mrs. Mortensen for pointing this book out to this blogger in 10th grade) chronicles how so-called elites continually recycle themselves.

George Orwell’s 1984 was first published in June 8, 1949. Many people view 1984 as prophecy, and Orwell as a prophesier. But all he did was write a fascinating novel about the well-established instruction manual for Western imperialism and control over the masses. The Ministry of Truth in 1984 is the government agency of Oceania that creates and disseminates all the correct and acceptable narratives of society. It’s where the mathematical fallacy “2 + 2 = 5” originated.

The U.S. Senate recently confirmed Judge Kentanji Jackson to the U.S. Supreme Court. She is the Democrats’ token Black tool who hates other Black people. Clarence Thomas is the Republican version who also hates other Black people. The two tribes must always appear to be inclusive and representative in a racially diverse country like the United States. Otherwise the two tribe system wouldn’t work. But Judge Jackson’s role is far more sinister.

In perhaps the most surreal moment in U.S. Senate confirmation history, Senator Marsha Blackburn, R-Tennessee, posed a simple question to Jackson on March 23.

“Can you provide a definition for the word ‘woman’?” Senator Blackburn asked. Judge Jackson said, “No. I can’t. I’m not a biologist.”

This person is a U.S. Supreme Court justice, and cannot and will not define a simple word. Of course the last Administration is now infamous for promoting “alternative facts” as opposed to reality. Even Kellyanne Conway had to hesitate before actually uttering those words on January 22, 2017.

This entire ordeal stemmed from the petulant desire of Donald Trump to assert that he had the largest Presidential Inauguration crowd in history. But his claim was fundamentally and otherwise false.

Humanity, particularly Americans, are constantly bombarded with lies, falsehoods, subterfuge and deception. The goal is to make you question fundamental truths, to question what you see and hear with your own eyes and ears. We’ve reached a point in society where government and media can tell a large portion of the American public that a banana is actually an apple; and they’ll believe it as long as it reinforces their tribal dogmas.

The Ministry of Truth was a fictional government agency created by Orwell. But now President Joe Biden and all future Administrations have their own version of such ministry unless someone steps up and challenges its legality.

The Disinformation Governance Board

Secretary of Homeland Security Alejandro Mayorkas announced the formation of what he called the “Disinformation Governance Board” on April 27, in front of the House Appropriations Subcommittee on Homeland Security. Mayorkas said the board will “coordinate countering misinformation” related to the Russia-Ukraine conflict, illegal immigrants at the Mexican border, and of course “safe and effective COVID-19 vaccines.” CNN’s Dana Bash asked Mayorkas on Sunday if he and Democrats would be okay if Donald Trump created something like this. Mayorkas danced around the question and said the board will “safeguard the right to free speech.”

The “Disinformation Governance Board” is led by Nina Jankowicz.

She is a 32-year-old (for lack of better term) random airhead who reinforces Democrat and big pharma propaganda. Those are not ad hominem attacks. This person published the following cringeworthy video in February 2021. She sings about “misinformation” to the tune of a Mary Poppins song.

Jankowicz is also known for blaming Russia for the whole Hunter Biden laptop story, despite even the New York Times now admitting said story is real.

Executive Director of Misinformation Jankowicz also published a book in 2021 called How to Be A Woman Online: Surviving Abuse and Harassment, and How to Fight Back. Of course she and her political tribe cannot and will not define what a woman is. Thus it’s unclear what exactly this book addresses. Several people have pointed to a zoomed-in version of Jankowicz’s official government photo. The crinkles in her nose denote that she’s more snarling than smiling. 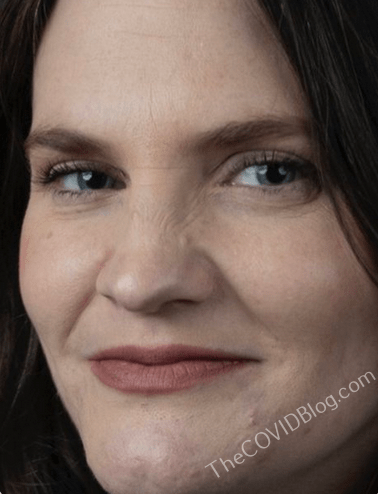 Many critical thinkers question the timing of this Disinformation Governance Board. Billionaire oligarch Elon Musk purchased Twitter for $44 billion a week ago, sending liberals into a meme-like frenzy. Right around that same time, The COVID Blog™ was banned from Twitter. Meanwhile conservatives are championing Musk as some sort of free speech exemplar. The bottom line is that billionaires work for the shadow trillionaires. It’s the same thing one level lower. The millionaire NBA players work for their billionaire “owners.” The average American isn’t even a pawn on the chess board.

Nobody knows exactly what this Disinformation Governance Board is or how it will affect the First Amendment. What we do know is that it’s the second blatant step in as many months that the Biden Administration has taken to facilitate The Great Reset. It was the Central Bank Digital Currency Executive Order in March. Now this.

These people know that the complete collapse of the United States and U.S. dollar are imminent. That’s why every billionaire increased their net worth by at least 50% from March 2020 to December 31, 2021. Musk’s wealth increased 10-fold in that time. They are monopolizing resources and preparing for a world with at least a 50% population reduction by the end of 2024, thanks to “safe and effective vaccines.”

We fully expect to be targeted by this Disinformation Governance Board. But ultimately, just like the mask mandates, it takes only one lawsuit to enjoin this illegal division of Homeland Security. This board was created in violation of the Administrative Procedure Act of 1946 (APA). Unfortunately it cannot be challenged until someone is actually harmed by it. It’s at that point when we all need to come together and ensure some level of checks and balances, even if it’s symbolic.

This woman’s eyes say she has an agenda.

She has gorgeous eyebrowse though.

And that she is deep in some form of psychosis.

Such a masculine, pointed chin and cheek bones. Very unattractive. Says a lot about the person.

I mean, what audience is she focusing on using a Mary Poppins tune? There are times where I do feel like those clowns/parasites think we are all ignoramuses.

Thank you for your great articles and being an unselfish soul who cares for humanity.

Speakng of the Supreme Court which is corrupt to it’s core…l am pro-life, but this recent leak of a possible overturn of Roe v Wade has all the earmarks of another pey-op.

First of all, the leak. That does not happen unless it is meant to happen. I believe the goals are: they need some way to hide statistics. With the clot shots sterilizing the masses, soon the empty abortion clinics will be obvious…just as now funeral homes are swamped with business, and buriels are being delayed.

#2 The public must be kept in a constant state of hyper-angry, political division. If this proceeds, it will be a huge step forward to further divide the states. Already the outrage propaganda is in full swing in Oregon and Washington.

Agree with you – the timing is very suspect!

You’ve made two very good points.
#2 I’d thought from day one is the case, but #1 I’d not even considered…and it has a chilling ring of truth about it…if as suspected these jabs are wiping out fertility how else could they explain the sudden lack of demand for baby-killing services?

I’m torn as well, because life is precious but if rash impulsive fools have sterilised themselves through impetuousness and a desire to go along with the herd, is that such an awful thing?

This broads a train wreck mentally and physically. In the US, nothing from the government, government agencies, state media or either political party can be trusted. You can trust that they are out to kill you though.

I’ve known for some time now that the book 1984 is not a prophecy. It’s a book about what is to come in the future.

I stopped falling for this mess several years ago and i even questioned the book referred to as the Bible, which some call “The Slave Manual”. It’s not a book of prophecy either, it’s about what’s planned to happen/take place on this planet.

If people don’t get their heads out of the sand or their rear end, things are not going to go well for most.

It was supposed to be titled 1948 but that was too soon. Orwell worked for the BBC so he knew the truth most likely. Whether he wrote the book as a warning or was directed to is another story. Many non fiction books end up in the fiction section.

She has interesting fantasies about Harry Potter, something she can chat over with Biden.

Yea, I’m far from convinced that Nina is a ‘she’