UPDATE August 31, 2021 – MP Dominello, with eye patch on to cover up his AstraZeneca-induced Bell’s Palsy, received the second AstraZeneca injection on August 30. It’s best not to comment further. 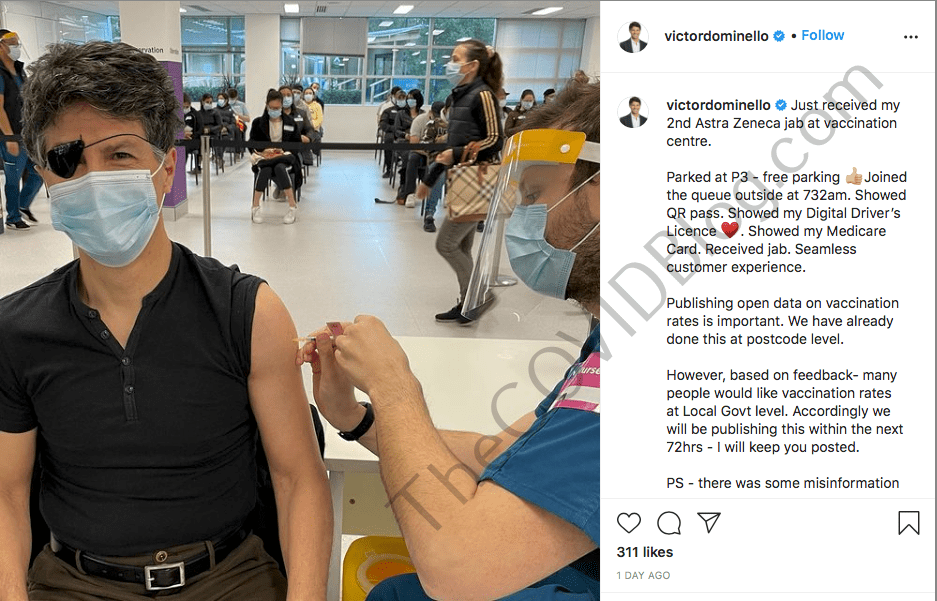 MP Victor Dominello received his first dose of experimental AstraZeneca viral vector DNA on May 26, according to his Instagram page. The die-hard mask, lockdown and “vaccine” zealot received the injection without wearing a mask. 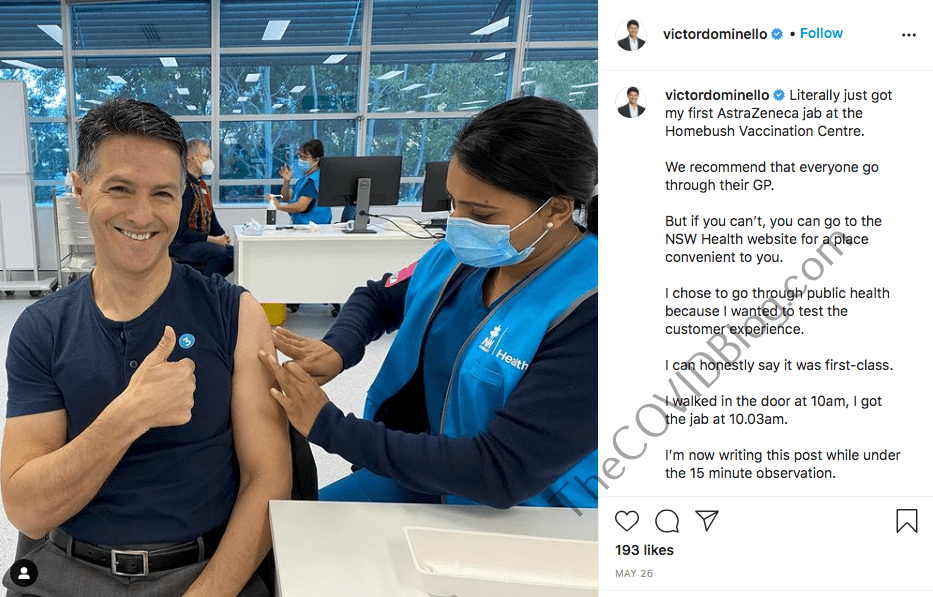 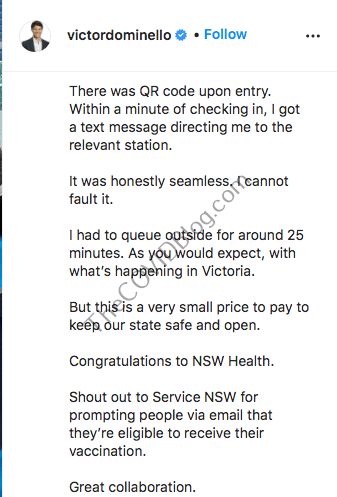 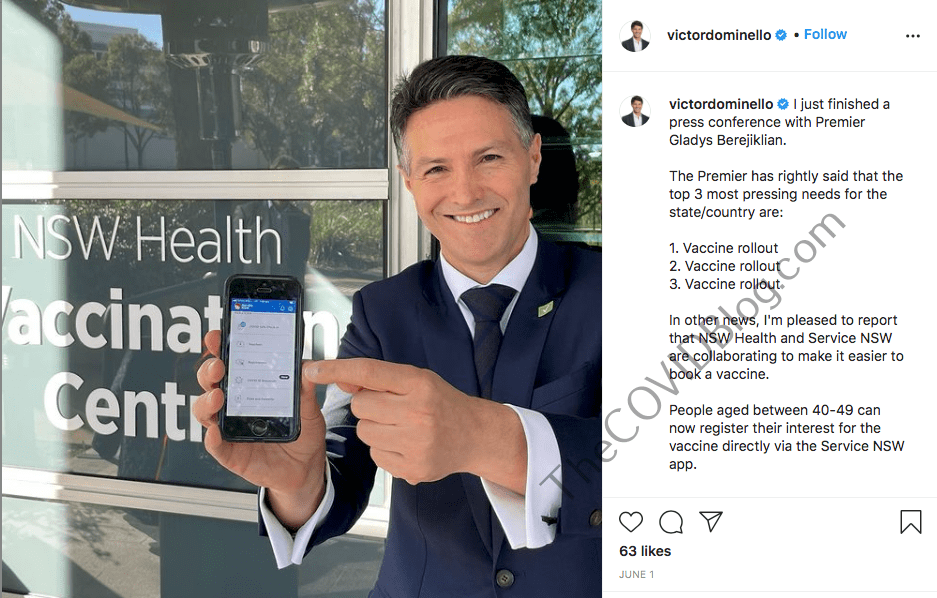 He talked about the “ServiceNSW” dystopian app on June 29. It literally tracks your every move so the government knows everywhere you’ve been. He also said his second AstraZeneca injection is scheduled for August 19. 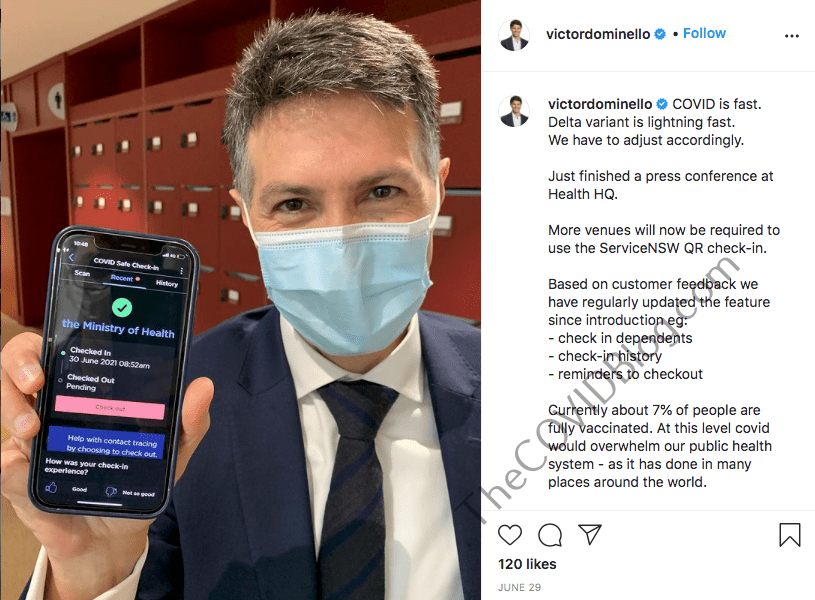 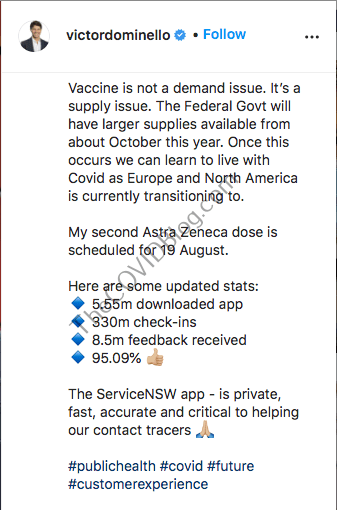 MP Dominello posted disinformation about AstraZeneca viral vector DNA “safety” on July 23. He confirmed his second injection was forthcoming “in a few weeks.” 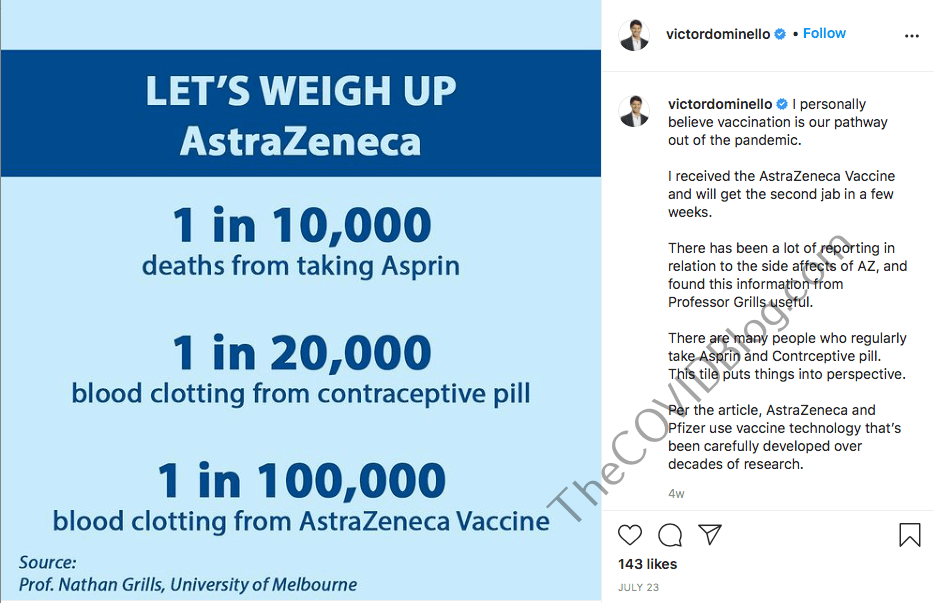 It’d be overkill to keep posting the screenshots. But the July 30 one is perhaps the most disturbing. With a big smile on his face, MP Dominello wrote that he forgot to “check-in” at a bank. Since the current app did not allow retroactive edits, he said that feature would be added by August 13. 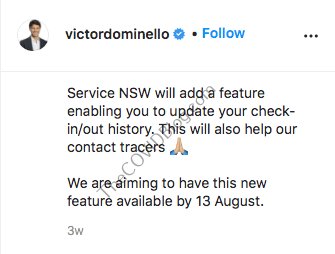 MP Dominello held a press conference on Wednesday, August 18. He spoke about business grants and more COVID-19 dystopia. But after the presser, he noticed hundreds of messages on his social media accounts referring to his “droopy eye,” his “winking eye,” and the strange look of his lips. Some people even joked, saying that he was winking while telling everyone the “vaccines” are safe.

Later that evening, MP Dominello took to Instagram again. He said that 48 hours prior to the presser, he felt the dreaded “pins and needles” in his tongue. He also said he felt pain in his skull. All the social media messages prompted him to go to the doctor. He was diagnosed with Bell’s Palsy, a known adverse effect not only for the AstraZeneca injections, but also the Pfizer and Moderna mRNA injections. 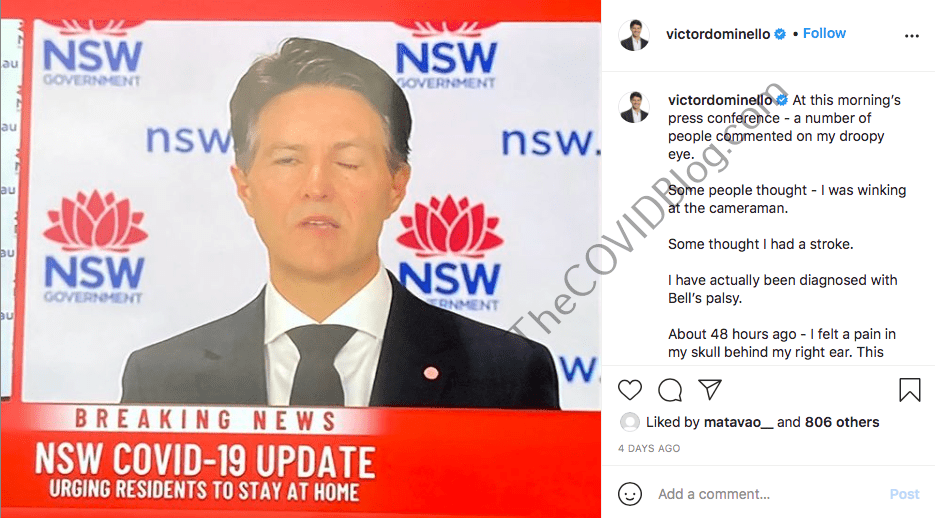 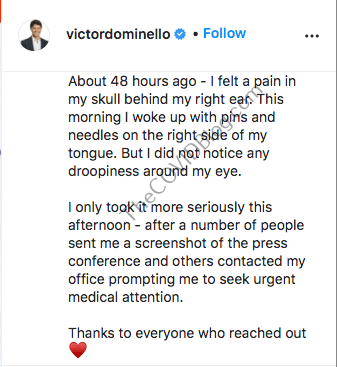 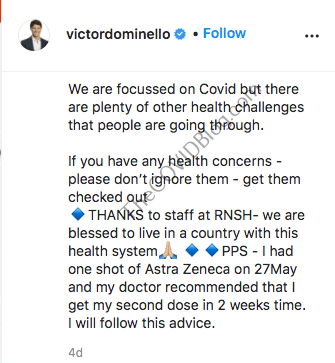 Australian mainstream media reported on Dominello’s Bell’s Palsy. But none of them mentioned the AstraZeneca injection. Of course Rupert Murdoch owns 65% of all Australian print and online newspapers. He also owns Sky News. ABC Australia is perhaps the second-most powerful media entity in the country. It also failed to mention the AstraZeneca shot.

The Aussie are enduring pure police state dystopia. Australia is, in this blog’s educated opinion, the worst place to be right now during all this COVID crap. New South Wales, Victoria and the Australian Capital Territory are all on strict lockdowns. People are being fined and arrested for “violating public health orders” simply for being outdoors.

Prime Minister Scott Morrison is starting to accept that the near-daily mass protests, some of which are turning violent, are only going to get worse as the lockdowns continue. He moved the goalposts again, now hinting that 80% of the population must be poisoned (“vaccinated”) to end lockdowns versus the 70% he’s been preaching for months. But neither number is realistic.

Further, Australia is yet another glaring example (like every other country) of positive correlation – these “vaccines” cause the so-called COVID-19 “Delta” infections. Australia was only 6.8% fully vaxxed on July 2. New daily COVID cases were still next to nothing on July 2. Today (seven weeks later), Australia is 24% fully vaxxed. COVID cases today are higher than they were at their August 2020 peak when there were no “vaccines” at all. 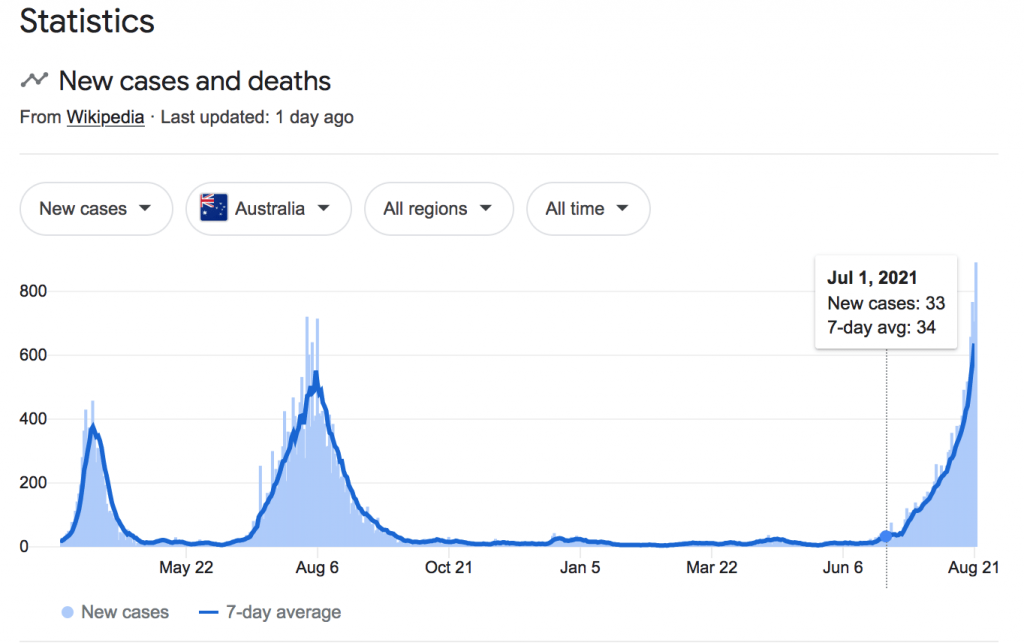 These indisputable facts matter. It’s up to all of us to break through these mainstream media and big tech disinformation monopolies. Granted the die-hard vaxx zealots do not care about facts (see Dominello and his U.S. equivalents e.g. Nancy Pelosi, Alexandria Ocasio-Cortez, and, at this point, even Mitch McConnell). Stay vigilant, Australia, and protect your friends and loved ones.

Strange that he didn’t get the saline like all the other politicians and VIPs. Was his vial mistakenly swapped with that of a common peasant, I wonder?

Bro aint in the loop…

Isn’t Bell’s palsy caused by the “envelope”of the jab – that is by the lipid-nano-particles. DNA/RNA does not have to be included. That was in the clinical trials “only” the placebo shot without the Genetic ingredient.

Helping bring about the NWO of totalitarianism, with your vaccine passports and tracking apps, well bud, you deserve what you got for your stupidity because you are pushing evil upon people. Get your 2nd shot and take the consequences that come with it, as you are forcing those same kinds of consequences on others. Your father the devil, is proud of you.

He’s gotten off lightly so far. He so richly deserves so much more.

Awaiting his next speech. Hey, Victor Dominello Be sure to get your boosters shots! I would usually refrain from sarcasm..BUT this has gotten over the top ridickcoulous! Side effects and death is rare UNTIL IT HAPPENS TO YOU!

It’s a holy sacrament…it really must be how they think of it! It’s belief based. Not fact based. Strong delusion.

agreed Wim. I feel sorry for him. there is a spiritual biblical component of God’s hand of judgment on those who enter into it thru their rebellion. this is where secular progressive humanism has taken mankind in rejecting God’s laws. it is form of idolatry. is it possible that the spike protein has gotten thru his blood brain barrier? one needs to wonder if this delusion could be an actual physiological affect–we heard early on how ‘brain fog’ was part of the symptom of covid for some people.

Lies are strong and they feed humanity’s rebellious nature. I know many people that love their own deception – to their destruction, sadly. It has never been so obvious to me as now, during this “plandemic”, “scamdemic” mess that we’re embroiled in. Stay strong!

Looks like a vacuous narcissist, but I hope he recovers and lives a quiet life somewhere near the beach with a woman who can remind him how stupid he is

That would be a fate worse than death.

Yes, hope she reminds him 3 or 4 times daily over the next 30 years of marriage will be lovely!

Definitely. One RARE experience with CT SCAN chemicals created hives all over and shortness of breath for me. And I was in the parking lot when it started—ready to drive home, alone. NO MORE intravenous or intramuscular unless it’s an emergency or very closely monitored medically.

Did you know my SIL and her husband went to our old FAIRGROUNDS building to get jabbed? Only thing worse would be those drive-thru jab set-ups.

Proud of being stupid!

The face of one friend who got jabbed, became quite lopsided & his speech is a little slurred like his tongue is sluggish. He is in 70s. + i did not see him for more than a year. but i don’t remember his face being so bad in 2020.

I did think too much until now. i wonder if he got a very minor BP.

Australia is obviously riven with election theft, too.

The winking eye is likely to lead to blood clots in the brain and in the future he’ll likely end up with glioblastoma.

Don’t forget to get the booster!!!

Stupid is as stupid does.

Epic Sellout and Traitor to humanity, please take your remaining shots and redeem your one way ticket to Valhalla…please just get it over with and leave the rest of us alone….