BELLINGHAM, WASHINGTON — A 41-year-old father, husband and Seattle Seahawks fan is dead in what appears to be another “sudden illness.”

Mr. Charles Leo Haley II received his first dose of experimental Pfizer mRNA on May 27 at the Lummi Tribal Health Center in Bellingham, according to his Facebook page. 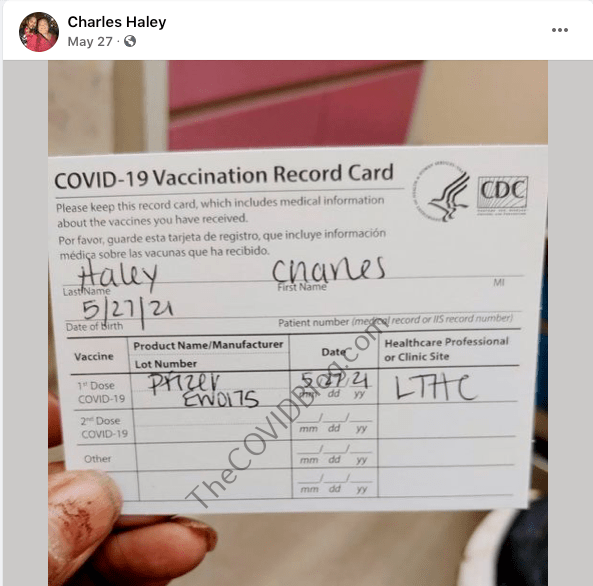 Less than two weeks later, he wrote about three of his four daughter being “fully-vaccinated.” Friends and family praised and congratulated Mr. Haley and the girls. 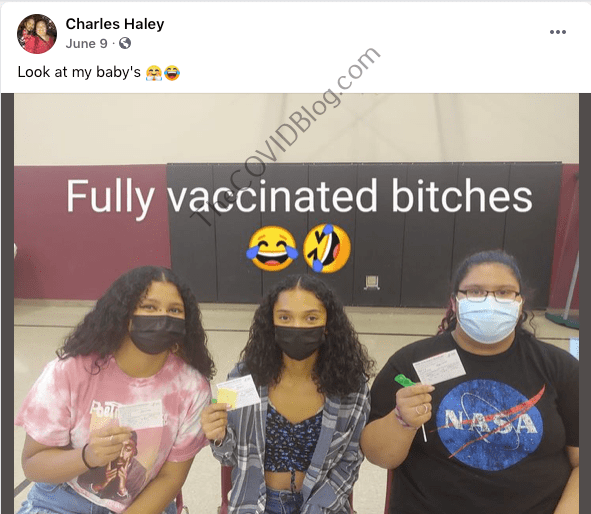 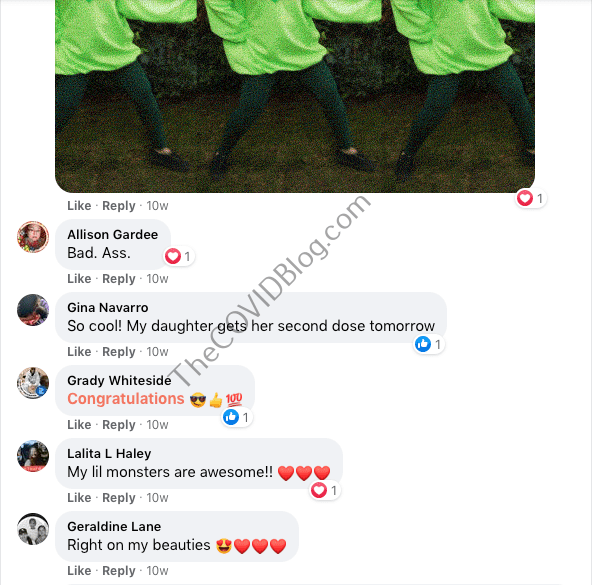 One week later, his wife, Mrs. Lalita Haley, posted her “I got my COVID-19 vaccine” profile banner. 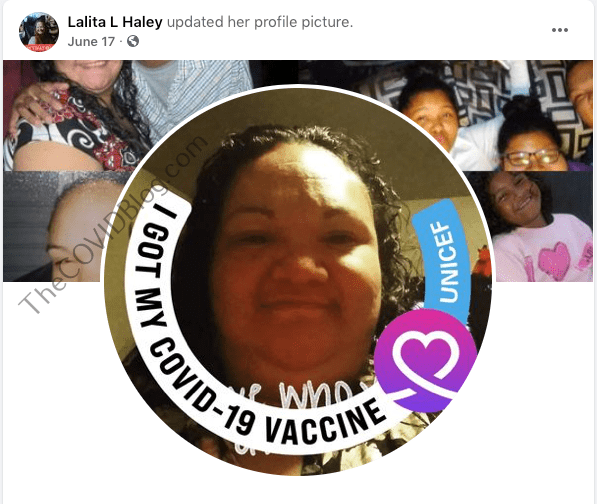 That same day, Mr. Haley reported that he received his second dose of experimental Pfizer mRNA. Mrs. Haley appeared to mock the non-vaxxed, saying she hoped her husband “won’t turn into a zombie.” 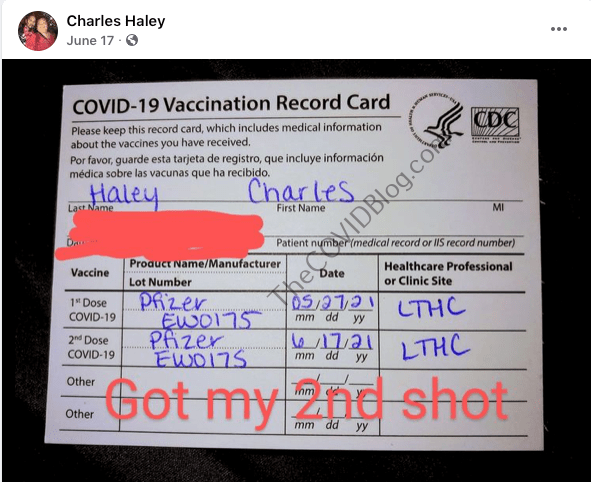 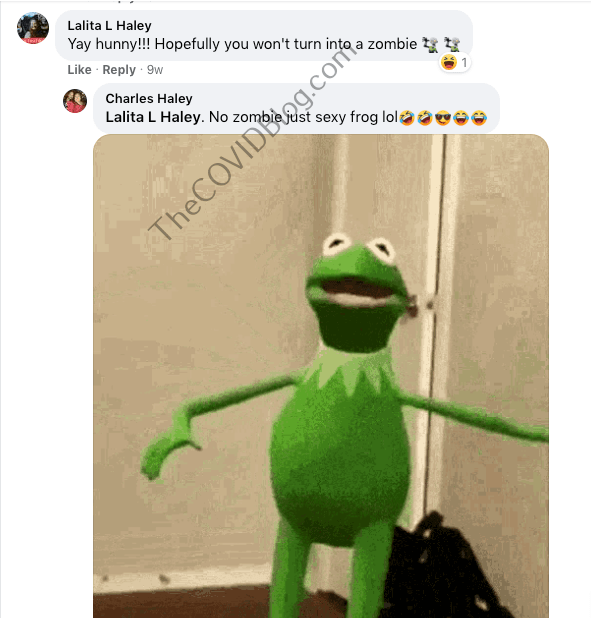 Mr. Haley was very active on Facebook. He rarely went more than two days without posting something, mostly about hip-hop music, cars and his family. Thus it was out of the ordinary for Mr. Haley to stop posting after July 23. His final Facebook post at 10:43 a.m that morning was a video of a souped-up car. He passed away on July 30.

There is no cause of death listed in Mr. Haley’s obituary. Neither Mrs. Haley nor any friends and family, mentioned cause of death either. But social media is a major part of nearly all American lives. People’s entire identities, whether real, exaggerated or completely phony, exist virtually on social media. Mr. Haley was no exception. Thus the seven-day absence before his death signals the “sudden illness” type of death.

Mr. Haley, from all appearances, was a good man and father. He and Mrs. Haley were together for nearly 20 years but married in 2015. A few sentences from his obituary capture who and what he was.

Lalita favorite memory is how he would cut my toenails, he would always cut them since we been together because he got tired of me scratching him in my sleep with my toes. The girls will remember all those times that they had cook alongside their dad in the kitchen.

You have to wonder about the mindset of his family. Three of his daughters and his wife are all fully-vaxxed. Mrs. Haley apparently got injections from the same Pfizer batch as Mr. Haley. They are already dealing with the loss of the family patriarch. It’s a gut-wrenching, unsettling position to be in.

The entire West Coast looks very similar to the European Union as it relates to COVID dystopia. The recall election for California Governor Gavin Newsom is on Tuesday, September 14. All the other candidates are a bigger joke than Newsom himself. But if he wins, Californians can expect water rations and “vaccine passports.” Oregon governor Kate Brown not only reissued a statewide mask mandate this month, but also signed an executive order that allows kids to graduate high school even if they cannot read, write or do simple arithmetic. Then of course, there’s Washington.

The Evergreen State is the ninth-most vaccinated in the United States, with nearly 60% of residents “fully vaccinated,” according to Becker’s Hospital Review. Despite this fact, Washington has its highest seven-day average for new so-called COVID-19 cases since the “pandemic” began in 2020. 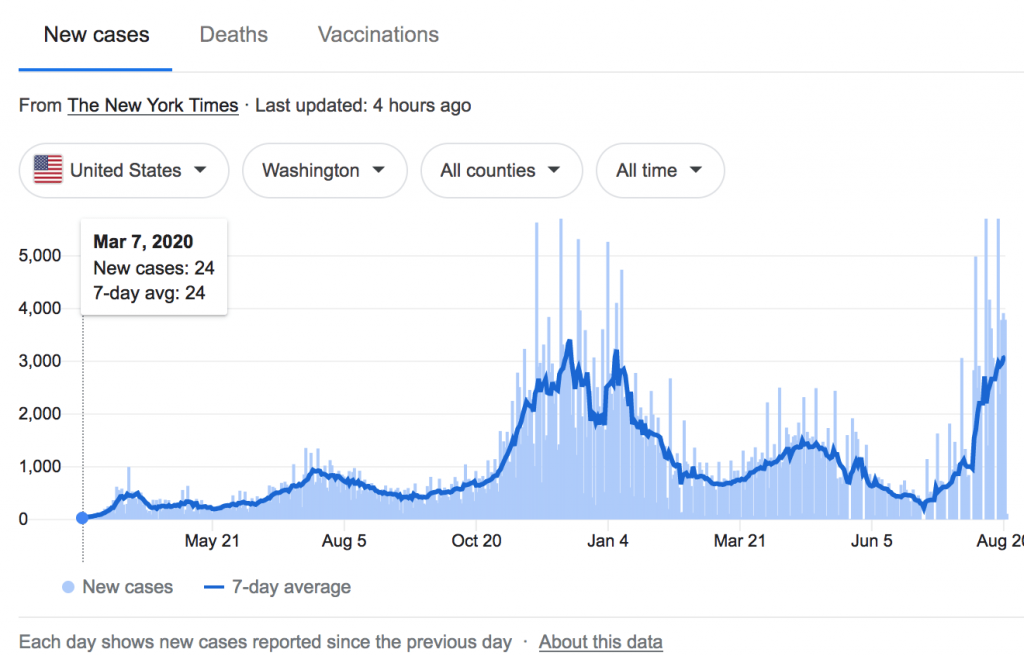 The truth about “vaccines,” COVID-19 and masks is all clearly-established at this point. Speak the truth confidently and forcefully. Do not get into circle-jerk arguments with vaccine and zealots. It’s simply a waste of time and energy. Stay vigilant and protect your friends and loved ones.

How can the lot numbers be the same for both doses?

A lot number, like on food, covers all the products made in one specific batch which would never just be one item.

If vials have a serial number, then the person who gave all their identity, phone, and address info can be spied upon via several avenues. The government can thus test things on people and see the results.

Very much so. Even creepier is the info asked for on the consent form. Lots of demographic info. Age, sex, race, and more. This is all input into the system and a vial number is produced from the input data.

I believe the vials contain more than 1 dose as well.

The price of virtue signaling.
Tragically, his death was entirely in vain.

Lots I could say about this, but I’ll just simply say, his wife and daughters may be joining him in the near future. Good father huh, he may have given his children a death sentence because of his stupidity and compliance, that’s not being a good father, you are suppose to protect your children. Then to pose for photos and joke about it as if its something to be proud of, smh, humanity is finished. I wonder how the 3 daughters are doing, perhaps laying awake wondering if they are next?

Maybe this will wake up his 4th daughter

All the coarse talk about the daughters is more proof to me of the need for private school or homeschool. I would not any kids of mine go to a school with kids like his, from the way he talked about them.

What is cultural low point to you, might be just culture to someone else. Who says we all ought to talk and have the manners imitating aristocrats or their fakers ?.

As a matter of fact, nowadays most people think of themselves as being decent, just because they say “please”, “thank you” and “pardon me”. While if looked at closely and objectively, they are anything but decent.

That whole family looks unhealthy. I side with the idea that the shot hastened this man’s passing. Did anyone see under “Date of birth” on the death certificate (aka vax card) that the day’s date was written, not the DOB? Really inspires confidence in the shot people. No cause of death on obituary. I wonder how long he really felt something was off with his health.

I never understood these AH who plaster details of their private life online (fook your toenails and you). They must be really desperate to fill the spiritual void inside them. People retard enough to post anything and everything about them online, are only feeding data to the AI super computers to enslave us even more.

At least the husband didn’t turn into a zombie as they were afraid he might.

Unbelievably tasteless and low class. And symptomatic of a DEGRADED, CLASSLESS, AND QUICKLY DETERIORATING CULTURE.

The vaccine is an IQ test and another person just got their failing grade delivered straight to them.

Right you are dddd. How much of a low-life do you have to be to refer to your own daughters as “bitches”? These three and their mother are obese/morbidly obese. I fear they will soon join their beloved Charles. Sad.

Personally I don’t look down on her simply for using “bitch*es” on her daughters. Indeed, I came to understand that there are a wide range of cultures and sub-cultures that allow people to perform in their particular social context.

What might seem offensive to me, might not be to someone else and might in fact have a very different meaning to him/her. Expecting everybody to espouse the manners and vocabulary that fits my sensitivities and culture, would be unrealistic and very much unproductive to say the least. That’s a good step toward accepting others and navigating peacefully in society.

I used to be offended when a young black guy would address me as “my Ni..a”. Now I don’t even give it a thought, it’s just a cultural thing, God Bless him.

The definition of “bitch” is a female dog or a prostitute or a very unpleasant person; usually applied to females.

Now if some “sub-culture” as you describe it wants to change a long established definition of a word in the English language; I would first wonder where their authority or background in philology or etymology to change that word’s meaning came from.

I mean tomorrow a group of citizens can claim that “hot” really means “cold”; and that “dry” means “wet”; but I gravely doubt such a re-definition would be well received by those with a working brain.

Even more importantly; when we give words meanings that HAVE ABSOLUTLEY NOTHING TO DO WITH WHAT THEY ACTUALLY MEAN; we create a language based on lies; and when your language is founded on lies; well; your society dies.

You have a great live example in 2021 America.

So I suggest that your “tolerant” approach; “accepting” and “sensitive”; is nothing more than an illusion.

All viewpoints are NOT EQUAL. It is the notion that they are “equal”; that the “lie is sort of like the truth”; that has brought us to the very brink of the abyss here in 2021.

But the definition does not change for me.

A man here in Wa was sentenced for murdering a trans ‘female’ he was getting intimate with, then discovering it was born male! There are facts that cannot change.

Bless him for passing on a death sentence to his daughters? He was not the sharpest tool in the shed…

Anyone notice the ink color and hand writing is different on both his vax cards for the first injection.

Also, the hand writing on the second card was written by the same person for both injection dates.

This is very suspicious!

Suspicious and interesting indeed. Good catch. My initial guess is that he lost the first card and, since he went back to the same place for the second injection, they had it on record. So the “administrator” just wrote a whole new one. -Brian

And they were still on the same lot number 3.5 weeks later?
Or in haste, did the person copy the first lot, and then wrote it again instead of the one he received that day?

There are only 6,500 or so members of the Lummi Tribe. He received his injections at the Lummi Tribal Health Center, on the Lummi Reservation in the Puget Sound area. I assume only tribal members and their families go there. Maybe Lummi is his wife’s tribe? Mr. Haley was raised in Detroit on the Yakama reservation. There’s a Yakima, Washington too, but unclear if the two locales are related.

It was just a guess. How many vials in a “lot?” I cannot find that info immediately.

I noticed that but was thinking everything was re-written because the first card had the 1st vaccination date as his birth date. So the first writer made a mistake. In the second the birth date is obscured. I find it strange that a person who publicly refers to his daughters as b*tches would be shy about sharing his birth date.

It may just prove how non medically trained in record keeping they are. Professionals are meticulous.
‘Bitches’ is a common term like ‘homies’, the writer was calling the reader that, not his girls. If it was me; I’d say “See, guys!”

His lifestyle says a lot!