WASHINGTON, D.C. — There’s some weird stuff going on in mainstream media over the last several months. Every now and again, one of their reporters either grows a conscience and tells truth, or their editing teams are so decimated by “vaccine” injuries, that truth is accidentally getting out on their platforms. The most recent accidental truth incident via the Washington Post (“WAPO”) is a continuation of the last major gaffe by mainstream media.

Medical Daily reported on June 14 that severe so-called COVID-19 cases were rare in non-vaccinated people. It cited a large-scale study by the Control Group Cooperative. MSN.com, aka Bill Gates’ website, re-published the story that same day. Less than 24 hours later, MSN.com completely scrubbed the article from its site. We posited that someone at MSN got fired as a result of letting truth get out.

It’s a futile endeavor for the powers-that-be to try and hide the truth. All they can do is gaslight, propagandize, and hope vaxx zealots continue their aggressive echo chamber function. But the cracks are getting bigger and the truth is leaking instead of oozing out lately.

This blogger knows all about being young, naive and hopeful – thinking you can change the world via mainstream media journalism. It also reminds of a scene from the 1991 comedy film “Livin’ Large” when rookie reporter Dexter Jackson receives some harsh truth from his idol, and veteran reporter, Clifford Worthy.

Ms. McKenzie Beard (pictured) got her wake-up call this week. She graduated from Keizer High School – about 50 miles southwest of Portland, Oregon – in 2018, according to her Facebook page. 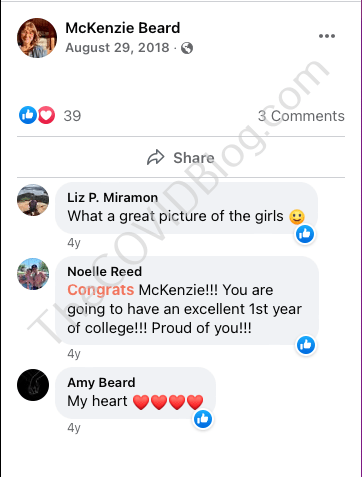 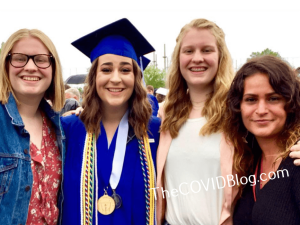 Ms. Beard majored in journalism at American University in Washington, D.C. She earned her bachelor’s degree in just three years, graduating in the spring semester of 2021. Ms. Beard was quite ambitious throughout college, working several reporter jobs in both print and broadcast media. She was particularly proud of her work being published in Teen Vogue in May 2021. Ms. Beard started her WAPO job in January.

She is currently working on her master’s degree at American University, which has a booster mandate. WAPO also has a vaccine mandate for all employees. 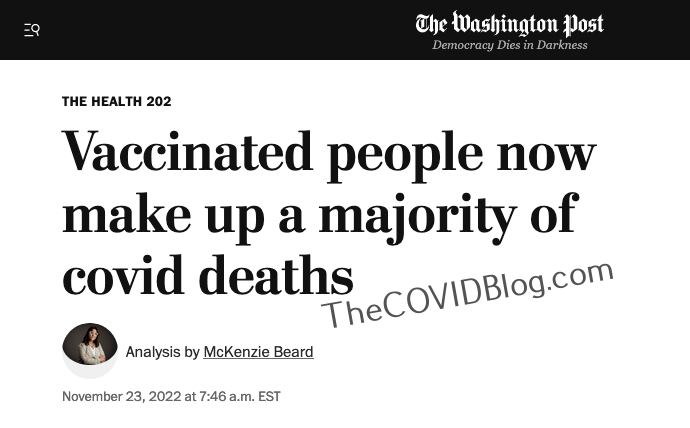 The article states the following:

“Fifty-eight percent of coronavirus deaths in August were people who were vaccinated or boosted, according to an analysis conducted for The Health 202 by Cynthia Cox, vice president at the Kaiser Family Foundation. It’s a continuation of a troubling trend that has emerged over the past year.”

Less than 24 hours later, WAPO propaganda supervisors changed the headline to a more innocuous euphemism. But the paper failed to disclose in the article that the change had been made. 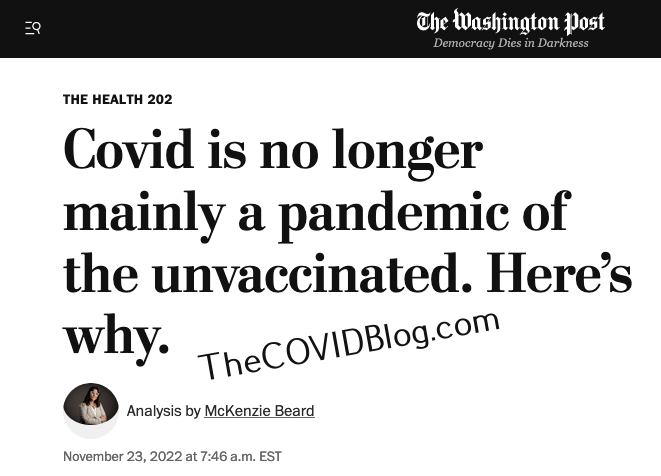 The body of the article remained the same. WAPO’s own correction policy states the following (archived today here):

“If we are substantively correcting an article, photo caption, headline, graphic, video or other material, we should promptly publish a correction explaining the change.”

We emailed WAPO to get an explanation as to why they did not follow their own policy related to the different headline. We haven’t heard back as of publishing, but will update if we do receive a response.

Ms. Beard mitigated the mistake with additional propaganda. She including Fauci in the article, encouraging people to receive endless booster shots at his final White House briefing on November 22. Let this be a lesson to young journalists – you are a tool, not a truth-teller when working for mainstream media. If you want to the money, blue check marks, cool press passes and assignments, then you better learn to be a good, obedient sycophant.

When lies are actually truth

NBC has allowed that article to stay live on its platform, as of publishing. The network really has no choice, as they’ve been an embarrassing gaffe machine throughout 2022. Deleting that article would have made things worse for what little credibility the network has left.

Centers for Disease Control (CDC) Director Rochelle Walensky said on July 16, 2021, that so-called COVID-19 is “a pandemic of the unvaccinated.” Ms. Beard directly contradicted the CDC director, her de-facto boss, even with the updated headline. Walensky went on to say that if you are fully-vaccinated, you are “protected against severe COVID, hospitalization and death.”

Walensky told partial truth. The “vaccines” do prevent hospitalizations because vaxxed people are spontaneously collapsing and dying a lot in 2022, versus getting sick and dying from the injections in the hospital. In most of said cases, the victims die at the scene or shortly after arriving at the hospital.

Whether Walensky, Fauci, et al. were subconsciously being honest about lower so-called COVID-19 hospitalizations or not is debatable. What’s no longer debatable is that the “conspiracy theorists” and “anti-vaxxers” have been correct about everything throughout this entire COVID-19 charade.

Ms. Beard likely received a hardcore tongue-lashing for her snafu. The fact that she’s so young may afford her leniency from Jeff Bezos and company. Ms. Beard must now prove herself as a loyal, obedient worker bee if she desires to have a long career in mainstream media (being triple-vaxxed notwithstanding). Her initiation will come soon enough. Good luck to you, young lady, with the job and the jabs.

COVID Legal USA is your partner in fight mandatory vaccines and other COVID mandates. Follow us on Telegram. Pre-order The COVID Blog™ book here.

McKenzie Beard did not commit suicide next month . . . RIP McKenzie.

If she is under a “mandate”, she already did – most likely.

From the initial picture at the beginning of this article, I thought MacKenzie was middle age. She’s in her early 20s. Shots are taking their toll on her already. Graduated outside of the woke cesspool Portland OR. Degree from woke American University with clot shots. Working at woke cesspool Wapo with boosters. She really made a deadly collegiate and career path choice. Enjoy what’s left to you MacKenzie as according to your article you know the truth and what’s in store for you.

All the mandates at these ‘news’ places who use people as ‘useful idiots’ is reminding of what Yuri Bezmenov, a Soviet spy who defected to the West, said about the four stages of communist takeover. The last one was “Normalization”, in which the journalists and media types who helped are then terminated, to prevent any of them that might have developed misgivings from spreading them and being a threat.

I do not have any sympathy for them anymore and apparently their masters do not either. At work and all around me the vaxxed are getting sick repeatedly. Cancers and vertigo. Menstrual issues. Rsv and gastrointestinal issues. I could go on. I take a regimen of supplements and get outside every chance I get to avoid their shedding and illnesses. So I am tapped out on sympathy.

Obesity can do that – make someone look older; otherwise she is a pleasant looking young woman (to my eyes anyway) , rotund in some areas that males like and maybe in other areas that males don’t like. Meanwhile, the problem we have here is serious if the contrarian scientists are right – the continuing deaths tend to support their views. Will even one injection do the deed? Does it depend on the amount of mRNA macromolecules in the shot? Are some more susceptible than others? (People we know are still walking around with no side effects – yet.) Does exercise potentiate the ill effects? Does the body have any chance to repair itself? Should everyone who has taken those shots demand to get D-dimer tests and prothrombin time tests? (I think so.) We have to get a handle on this situation before the gallows are built. If this does become like the “Black Death” in Europe in 1347 AD we will have the answers at our fingertips as we drag the bodies to mass graves as there will be too many dead including dead morticians to process them as one person has predicted.

“rotund in areas that males don’t like” come again??? Huh? What did I just read?

Vaccinated people seem to age at an alarming rate. My husband’s sister, who is my age (61), looks at least 10 years older than me. Her face is wrinkled, her skin is crepe-like, and she’s hunched over and frail. I couldn’t believe how much she aged after not seeing her in over a year. Of course she is fully Vaccinated and boosted.

Same. I thought she looked at least 35. My son and his girlfriend (neither vaxxed) are a few years older then MacKenzie and they look far, far younger.

I’d say that is just how a lot of women look when they don’t wear makeup and wear glasses. I am not very cute either when I wear glasses. C’est la vie.

I love it how they are progressively sneaking in the truth as if the things they are now admitting are only now coming to light. Anyone who cared to know about any of this could have known enough in the beginning to “just say no” to drugs. And we also knew that we the unvaxxed were never the problem. THEY were.

In the meantime, more and more folks are dying from an attack of that new “suddenlyitis” disease.
#ABV

Yes, I understand that the CDC without any “fanfare” recently dropped from the corona virus website the assertion that the messenger RNA and viral vector DNA macromolecules stay in the deltoid muscle in the arm. I had read that Japanese scientists had already discovered that they migrate throughout the body, not just stay in one spot. The Japanese have a very advanced medical and scientific enterprise and others following that have found similar results so that erroneous CDC statement could not be supported without appearing foolish. One wonders on what if any evidence the original statement was based. If it came from Pfizer, Moderna, and Johnson & Johnson, that presents a legal opportunity in my opinion.

I have given lots of injections in my day as a nurse. But you don’t have to be a nurse to understand that no drug injected into the upper arm (or any muscle) *stays* in the that muscle.

Muscles are extremely vascular. It’s pretty much guaranteed that lymphatic and blood circulation, with their thin walled vessels, will pick up the vast majority of anything injected into the arm. And actually, you would normally expect it and you would WANT it that way. Otherwise, how would an antibiotic or pain med have any effect on the body if this did not occur? ALL intramuscular (IM) meds injected into the body are *expected* to have systemic, rather than mere local, effects.

Here’s the truth: They KNEW the nanoparticles would travel. It’s simply an anatomical and physiological fact that it always happens. But they also knew that people would have concerns if those drugs did hitch a ride in the body’s circulatory system, because of the natural questions that would arise.

The claim that the shot would stay in the deltoid was a deliberate lie from the start, and was based on the assumption that the public had insufficient knowledge of how the body processes medications. For me, it was just another lie that I could add to my already growing list of 200+ reasons why I was never going to get the shot.

I couldn’t believe that stays in the arm claim either when I heard it. Do people not know they have circulation within their entire body?

Watch the old Twilight Zone “ The Obsolete Man” to find out what happens to useful idiots. They suddenly become “useless idiots”. Rod Serling was a genius.

Kudos 👏 Another great write-up from this blogger. I can’t add much, take posting a book…LOL😀 But suffice to say, most people don’t realize how hard it is to speak the Truth to a world full of people that don’t realize they’re living a lie.