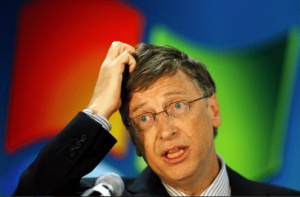 COVID-19 is the largest and the most comprehensive psychological operation in human history. Narratives are meticulously controlled. Propaganda is persistent. Fear is key to the success of this psy-op. But ultimately mainstream media propaganda channels are run by humans who either experience mea culpas or simply make critical errors that could potentially awaken the lambs. Microsoft is now cleaning up one of those errors that caused major upheaval among vaxx zealots.

The Control Group Cooperative (CGC) was formed in July 2021. The founders recognized that traditional research universities and organizations refuse to do studies comparing the health of vaccinated versus non-vaccinated populations. Dr. Robert Verkerk of the Alliance for Natural Health International, led a team that analyzed the CGC data, that currently includes over 305,000 non-vaccinated study participants in 175 countries. They are all provided ID cards that identify them as clinical subjects and thus “must not be vaccinated.” 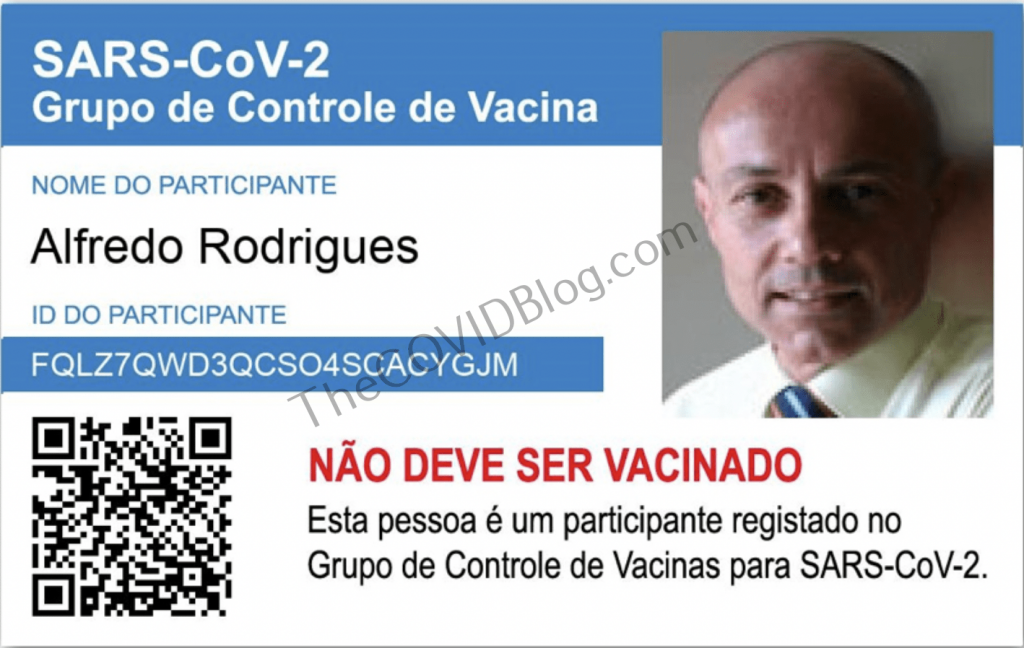 Many of said participants reported that the ID cards prevented the myriad loses of liberty and overt discrimination regularly face by the non-vaccinated across the globe. All participants agreed to fill out monthly surveys regarding their health. The instant study, uploaded to the ResearchGate preprint server on June 8, reports the results of the first five months of said surveys (October 2021 to February 2022).

The researchers made clear that all participants self-selected to participate versus being randomly selected. They also self-reported via online surveys. Thus this study is not directly comparable to traditional observational studies. The instant study focuses on a sub-cohort of 18,327 participants out of 297,618 who had registered by the end of February 2022.

The survey findings were compared to pro rata adjusted CDC data on hospitalizations related to so-called COVID-19. CDC data found that 10.4% of Americans experienced symptomatic illness from October 2021 to February 2022. The CGC cohort experienced 25% symptomatic disease. The number is so much higher than the CDC number because anything from fatigue to a cough was reported as symptomatic illness.

A vast majority (71%) of the cohort reported self-treatment with some combination of zinc, quercetin, and Vitamins C and D. Ivermectin and hydroxychloroquine were also commonly used for self-treatments. But it’s the hospitalization data that sent mainstream media into a panicked frenzy.

The fallout ensues at MSN.com 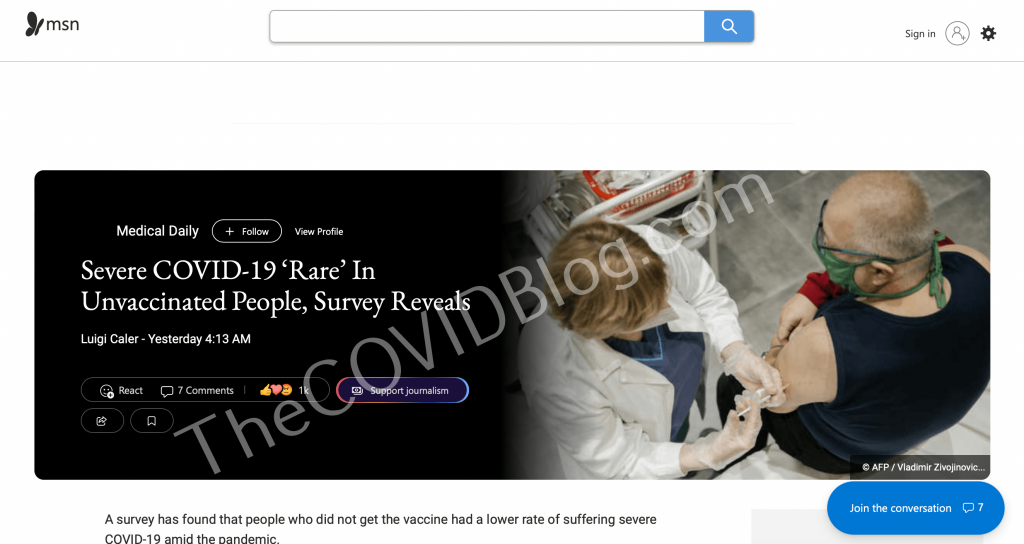 Note that MSN.com is the “Microsoft Network” and the default homepage for the Microsoft Internet Explorer web browser.

RELATED: Bill Gates: a look back on the vaccine godfather’s evolution as “at least I’m vaccinated or it would be worse” becomes official slogan of the COVID religion (May 12, 2022)

The article remained live on MSN.com for close to 24 hours. But now the original link redirects to the MSN.com homepage. It is only accessible now via archives. As of Sunday, June 19, when you search the exact title of the article via Google, you get the following. The MSN.com article does not appear in the search results. 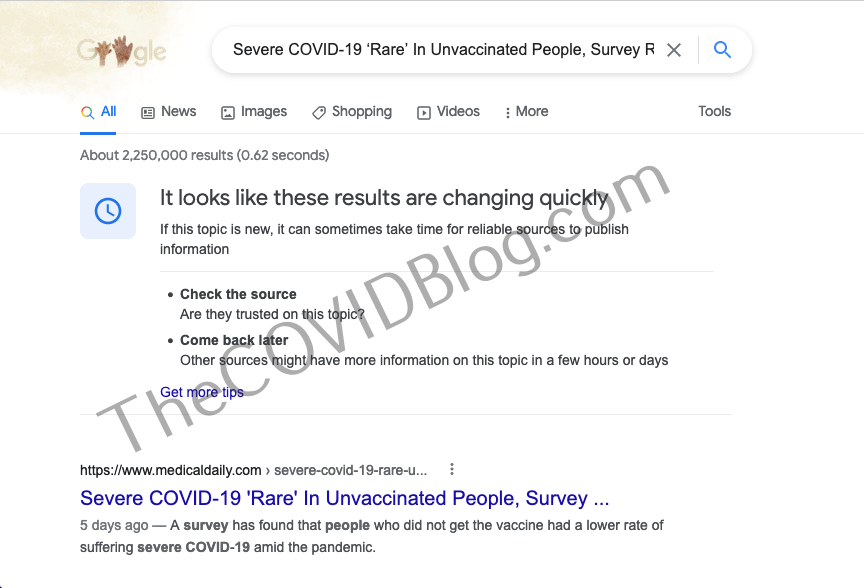 When you search Luigi Caler, the original author of the Medical Daily article, the MSN article is the ninth result on the first page of Google results. 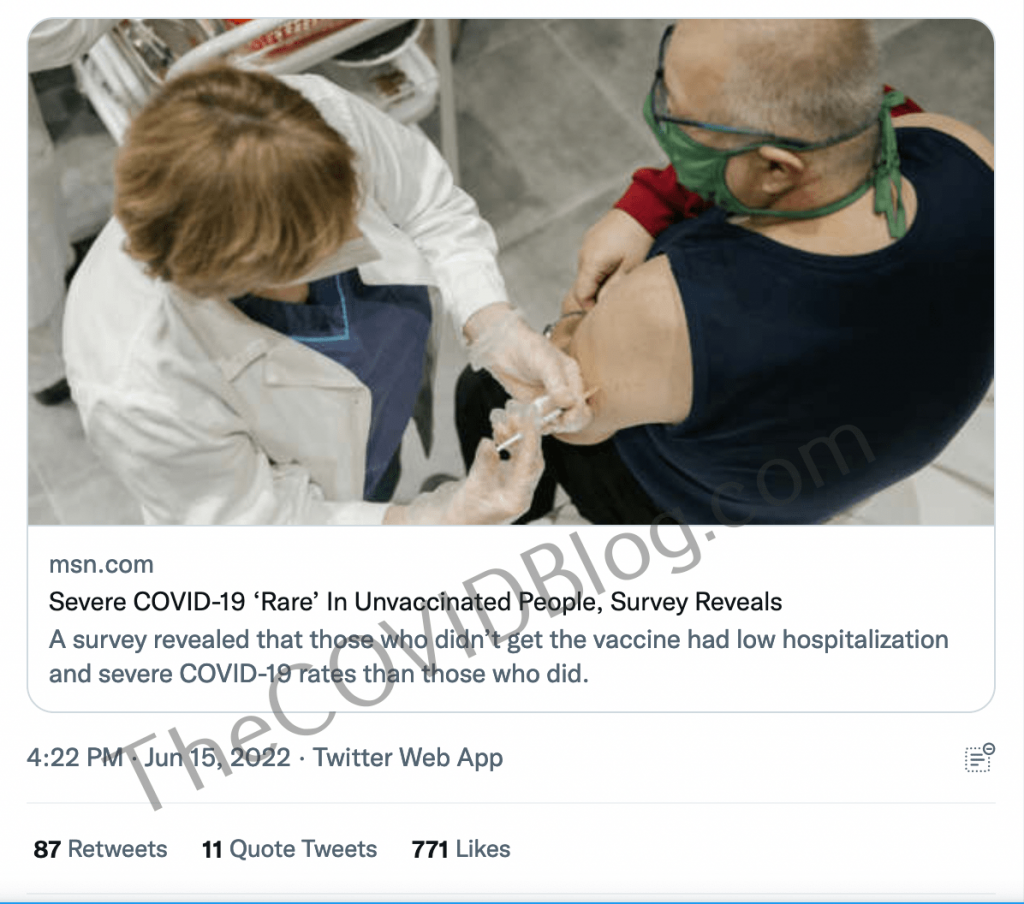 It’s unclear who is in charge of republishing articles on MSN.com or who runs the RSS feeds that automatically republishes articles on said site. But rest assured, someone has been fired or worse.

Accidental truth more common than not

Fauci completely malfunctioned on live television on April 26. He said on PBS NewsHour that the world is “out of the pandemic phase” of COVID-19. The next day, then White House Press Secretary Jen Psaki corrected Fauci in front of the world.

In fact Fauci is one of the primary providers of accidental truth in this age of lies and deceit. He admitted in August 2020 that any and all PCR tests exceeding 36 cycles of amplification are essentially finding “dead nucleotides” and are false positives for COVID-19. The United States used 40 cycles throughout 2020. The U.K. used 45. Of course the FDA rescinded the emergency use authorization for PCR as a COVID-19 test on December 31, 2021.

Even George W. Bush admitted a few years after 9/11 that 1) Saddam Hussein never had weapons of mass destruction and 2) Iraq had nothing to do with 9/11.

But the U.S. invaded Iraq anyway because Saddam Hussein started trading his oil in euros instead of U.S. dollars in the late 1990s. The powers-that-be are both very predictable and very sloppy. They rely on mass gullibility and obedience to pull off their agendas. But if you wait long enough, they’ll slip up and tell you the truth.

Don’t expect full truth being announced by global governments regarding the vaccine genocide anytime soon. The truth, however, is revealing itself with the hundreds and maybe thousands of daily sudden and unexpected deaths of young people in 2022. It’s all very simple – believe what you see with your own eyes, or believe what you’re told. It’s your choice.

I believe that a relative died from the two shots and booster. The County Coroner released the cause of death which is similar to those who died from “clots” in the brain. Where can I report this without my name involved?

Is there a way I can be a part of that study? It’s brilliant!

The truth always comes out.

I’m not so sure about that. At least in this realm.

IMO That was no “accident”. An employee who’s been previously harmed sacrificially slipped the report onto front page. Not unlike the ill-fated infantrymen knowing deep down that the charge they were leading would be their last.

“But rest assured, someone has been fired or worse.” Totally AGREE. Like “been fired at” ? That person knows he/she was poking a bear in its own cave. The irony is fun for us to watch, but must have burnt like hell for someone.

These vaxx zealots remind me of little babies, “oh no it’s another fake publication blah blah.” Oh no little baby can’t handle reality. That’s exactly what they remind me of. Look up the cluster b disorders in the dsm, you’ll find all your liberals and vaxx zealots listed there.

Hate Them With A Perfect Hatred
Reply to  Gwen

I agree. They have very childlike minds. Their inability to face facts and deal with the harsh reality of the world is juvenile. They resort to slurs, buzzwords, and ad-hominem attacks because they don’t have facts on their side…another indicator of immaturity. At some point mature intelligent people who value the truth will have to handle these brats just like a parent must discipline a child.

Susan Jones
Reply to  Hate Them With A Perfect Hatred

I have to respectfully add one thing – it is very difficult for the average person to accept that there is pure evil in the world and people working to bring about and continue the evil especially as it grows stronger. We are brought up to respect our elders, those in authority, doctors and people in government. We have had to learn that those people could stand right in front of you and lie right to your face and have no remorse or regret for doing it. That is very difficult for most people to comprehend. So don’t discount them as juvenile or babies. The average “man on the street” doesn’t want to admit the truth. More wake up everyday, but the majority never will. One day, by the time they do, it will be too late and their fate will be sealed (literally).

The VAERS numbers of almost 29,000 dead (see OpenVAERS) is a confirm hoax, and should be multiplied by 1000x.

In the US, there are 8 million unemployed that will stay unemployed in most economic conditions.

The US is in a serious recession and millions of jobs have been cut. That’s a ballpark of about 10-12 million jobs lost and may be more as these estimates were from last year.

Yet there are still over 12 million jobs unfilled in the job market based on figures from September 2021.

Wow so disappointed to see Nassim Taleb fall for the propoganda, I actually respected some of his books.

could not agree more. Been a fan of Nassim for YEARS. A few years back, he began to get squishy on “climate change” and I began to have doubts about his honesty. He’d seem pretty solid about the silliness than renewables will solve all our problems before and then…slowly he started to change a bit.

Thus I was not shocked at all when he became a Covid fear-monger. Saddened? Yup. Disappointed? Absolutely

Hey Nassim Nicholas Taleb, you fear-monger, instead of bashing the study, why don’t you dive deep into the data? You’re a data guy after all. But you won’t.

You won’t because you KNOW what the actual data will be and for some reason, you’ve sold out to the Covid fear-porn.

You complain this study doesnt look at the unvaxxed who died. Well, hells bells big guy, let’s look at it, shall we?? Let’s look at ALL the data. Why are you not pushing for that?

Frickin’ pisses me off, these self-aggrandizing a’holes.