DONCASTER — A 30-year-old caregiver is the latest to report another horror story related to post-injection menstrual issues.

Ms. Chelsea Dixon received her first AstraZeneca viral vector DNA injection on February 13, according to Hull Live. She told reporter Susie Beever that her period did not come when it was due shortly thereafter. Ms. Dixon grew even more worried when another month passed, and she still did not have a period.

She went to see a doctor after the second missed period. But they told her it was a normal side effect from the viral vector shot. Six months after the injection, in August, Ms. Dixon still hadn’t had a period. She went to a gynecologist that month. Ms. Dixon was, again, told that the “vaccine” is likely causing the issue, but that it was a normal side effect. The OB-GYN also refused to provide her a medical exemption from the second shot.

Ms. Dixon believed that receiving the first injection would be enough to satisfy her employer mandate. She works for an unnamed adult care home. But Ms. Dixon refused to receive the second injection by the November 29 deadline, and was terminated. A few weeks ago, she finally had a period for the first time in nearly 11 months. But now she’s worried about her future.

“I feel really fobbed off,” she told Hull Live. Ms. Dixon said she wants to have kids in the future. But she conceded that the goal was already difficult because “she is gay.” Her female companion has received two injections herself. Ms. Dixon made clear that she is not “an anti-vaxxer.”

It was mere “conspiracy theory” to say women are being sterilized by these injections just one year ago. And once again, the so-called conspiracy theorists were correct.

Some of the emails we receive about menstrual issues are absolutely horrifying. A 32-year-old woman from San Francisco, who wishes to remain anonymous, said she quit her job and left her boyfriend because her periods turned blue after her Moderna booster injection in December. The skin around her groin and vaginal area have also turned blue. She is so ashamed and disgusted that she doesn’t want to be around anyone. Her doctor told her that it was just anxiety. But it sounds like a condition called cyanosis.

The public stories have long-established that these shots disrupt and destroy the female reproductive system. A woman named Ashley Auer reported an identical issue as Ms. Dixon – no period since May after a Pfizer injection. She’s 38. 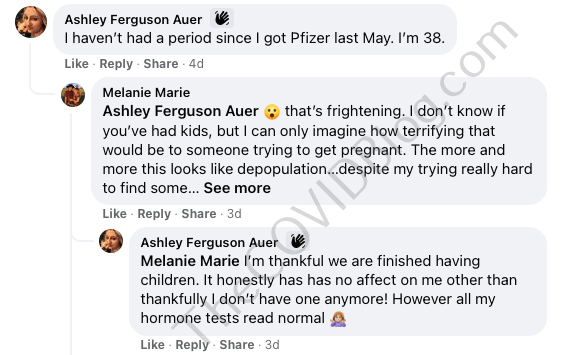 Another woman said her period stopped for three months after her second Pfizer injection. And after it finally resumed, it’s “definitely different.”

Increased frequency and worse-than-normal menstrual pains are also being reported.

We’ve covered, many times, post-menopausal women are having periods years later, simply from being around vaxxed people.

Then there’s Ms. Tanya McEwen. She received her first Moderna injection on June 29. Not only did she bleed for three-straight weeks, but also suffered elevated heart rates, severe headaches and fainting. Her doctor’s advice was to get a different brand of injection for the second one. Thus she received a Pfizer mRNA injection on October 24.

This time the bleeding included “large clots of blood.” Doctors found a cyst, fibroids and polyps in her uterus.  Now the only viable treatment is a hysterectomy. Ms. McEwen said she only got the second shot to save her job of 28 years. 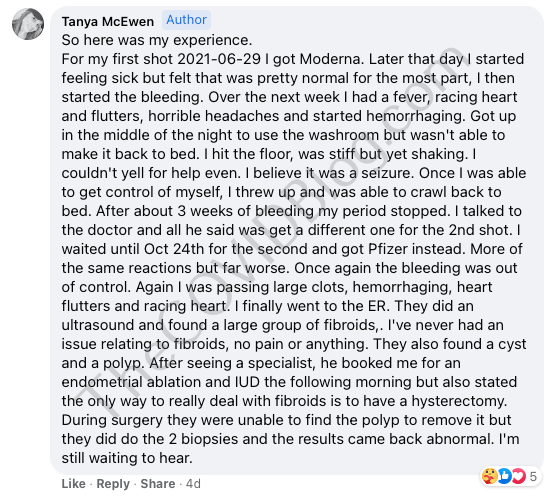 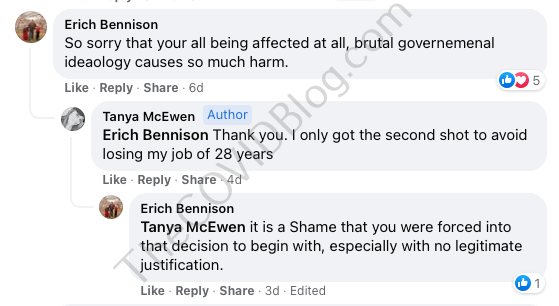 But what about the men?

Women are far more likely than men to talk about their medical issues publicly, even something as sensitive and personal as menstrual cycles. There’s really no arguing the fact that women are being sterilized globally in The Great Reset. But we’ll likely never know what’s happening to men because no red-blooded man will discuss erectile dysfunction or any other sexual issues publicly.

Most of you remember when rapper/pop singer Nicki Minaj tweeted that a friend became impotent and his testicles swelled after receiving one of the injections. 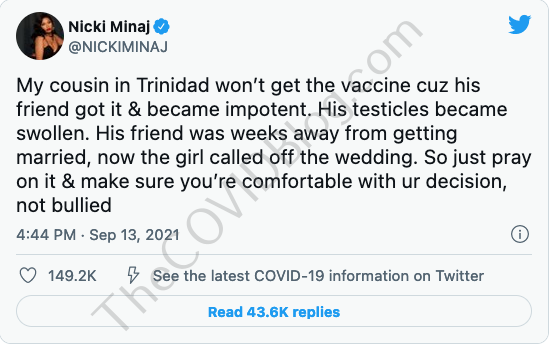 Mainstream media attacked Minaj and “fact-checked” her claims to attempt burying the story, to no avail. It was a classic Streisand Effect moment. We’ll never know how many men are suffering these types of issues because they’re not going to talk about it publicly. Further, mainstream media even attempted a propaganda campaign, telling men to take drugs to lower testosterone to prevent COVID-19.

There are already patients demanding blood transfusions only from non-vaccinated donors. Non-vaccinated sperm and ova will soon become extremely valuable due to supply and demand.

Unbelievable. This is horrible. But if people would have just said no, eventually businesses would have caved because who would have been available to work. Lack of conversations. So many messed up people in the world. God help them. 🙏

Thats why the powers that be terrified the masses into believing Covid would kill everyone who caught it. When people are afraid to die, they will do anything to avoid it. And sometimes the path we take to avoid what we fear, the thing we fear meets us on the path we take. I feed very bad for these people, even the stupid strutting Primadonna’s because they were lied to, and I think only by the grace of God did I find out how bad vaccines were only a few years back. Haven’t had jabs in decades and didn’t give any to my children after the younger turned three, but I wish I had known how bad vaccines were when they were babies because I would never have poisoned my children with them.

If the first jab makes them sick, why in the world would they get another one? I just don’t get it

The media (medea) witchcraft is working!

The media is a mind control tool. People believe what they hear and see on the TV even if it is not happening in reality.

They do it because their doctor tells them to do it, and they are extremely afraid of losing their job/income. These are people who have never questioned the mainstream news narratives about anything. I thank God 911 woke me up to the corruption of our so called “leaders”. I remember a time decades ago when I actually believed the mainstream narratives about most things.

Well its because they want to fly, they want to go to bars and restaurants, they want to go on cruises and they want to go to concerts. They also don’t want their peers thinking they are anti vaxx. They want to broadcast their photos with their vaxx card on social media, very important. They also want to ridicule people like you and me and point out our stupidity and the fact that the pandemic is our fault for not complying. I don’t get it either, but it is what it is.

You just about covered it all. These exactly the reasons most of them rush for the jab. To feel among the majority group that’s backed by mainstream authority. Bunch of sheep and NPC characters that’ll end up injured and disposed just like NPC characters do.

Apparently a lot of folks value money or their job rather than their own life. A lot of celebrities sell their soul to be rich and famous even when they know it comes at a cost.

“Ms. Dixon said she wants to have kids in the future. But she conceded that the goal was already difficult because “she is gay.” Her female companion has received two injections herself”.
These three sentences had me in a full belly laugh, this might be comic perfection.

I know a gay woman who wanted a child. She got pregnant by a buddy who I guess
was also gay. They didn’t co-parent. Had a beautiful daughter who used to play with my son when they were little. She seemed to be in love with him at that young age, so I guess she didn’t take after her mom in that area 🙂

“Her doctor’s advice was to get a different brand of injection for the second one. Thus she received a Pfizer mRNA injection on October 24.”

The only thing more funny than her doctor’s advice, is her following the advice. NEXT !!.

It is also funny that there are doctors unless they are paid by big pharma cannot figure out that all the Covid jabs are bad. It doesn’t matter which brand you take.

“Non-vaccinated sperm…will soon become extremely valuable due to supply and demand.” At least now I know how to make a living if I lose my job.