The following photograph is from a Walmart in Omaha, Nebraska on June 17. 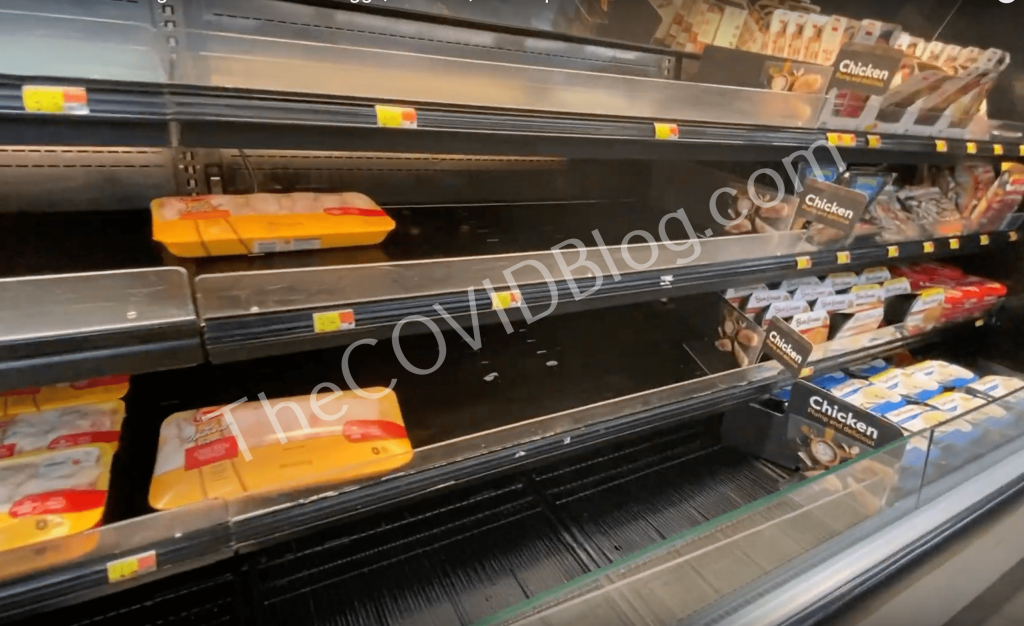 Images like this are regular occurrences across the United States. We wrote about the targeted attacks on food processing plants, particularly chicken farms across the globe a couple months ago. Even if you can find chicken in any form (frozen or otherwise), expect to pay a lot more than you were paying one year ago.

The Consumer Price Index (CPI aka the government measure for “inflation”) hit 40-year highs in April, and continues rising every month. The all-items CPI increased again to 8.6% for the twelve months ending in May, according to the Bureau of Labor Statistics. The food index alone increased 10.1% in May, representing the first double-digit, 12-month increase since 1981. Energy prices rose 34.6% in the last 12-month period, the largest increase since 2005.

National gas prices eclipsed $5 per gallon on June 13, the highest ever on record, according to AAA. Air fares are 38% higher today than they were at this time in 2021. The good news is that only fools are getting on airplanes in 2022. But we all need food and gasoline to survive in this society.

Oil prices would drop if the U.S. invested the $50 billion it’s given Ukraine since February into refining technology and use its own oil reserves to bring down prices. Ultimately the American consumer is collateral damage to ensure smooth execution of The Great Reset.

The federal government could also force oligarchs and corporations like Bill Gates, Jeff Bezos, BlackRock, Vanguard, Red Emmerson, et al. to use their millions of acres of farmland to grow food for the American public, like the government ordered all factories in the 1940s to make weapons, submarines and warships during World War II. But everything happening right now is all part of the plan.

Whether they starve Americans to death, kill them with injections and/or inflation, the goal is clear. And as long as the propaganda works on the gullible masses, the cull will continue smoothly and easily for the powers-that-be.

Cows don’t die due to a few days of heat

The video went viral on June 15 and 16. Rows and rows of cattle, perfectly lined up, laid dead at Cattle Empire feedlot in Satanta, Kansas.

Ms. Trista Brown Priest owns the lot. She told ABC-affiliate KAKE in Wichita that the combination of heat and humidity killed the cows. Agricultural trade publication DTN estimates that 3,000 of Cattle Empire’s 51,000 “fat cattle” died. Note that “fat cattle” are the ones that are scheduled to be slaughtered for food within days. A total of 10,000 cattle have died total so far this season. Temperatures peaked around 108 degrees on June 13 in southwest Kansas when the deaths apparently occurred.

It’s not entirely unusual for fat cattle to die in Kansas at this time of year. What is unusual is how perfectly lined up and seemingly organized the dead carcasses looked. The vast majority of cattle that die every year before harvest are killed by coyotes, dogs and other predators. The most frequent non-predator causes of death for cattle are old age and respiratory problems. Mainstream media, however, blamed “heat bursts” in the middle of the nights from June 11 to 14 for these particular cattle deaths.

A Kansas veterinarian named Tera Barnhardt said on June 17 that all the cattle died of multiple organ failure and asphyxiation due to heat and humidity. 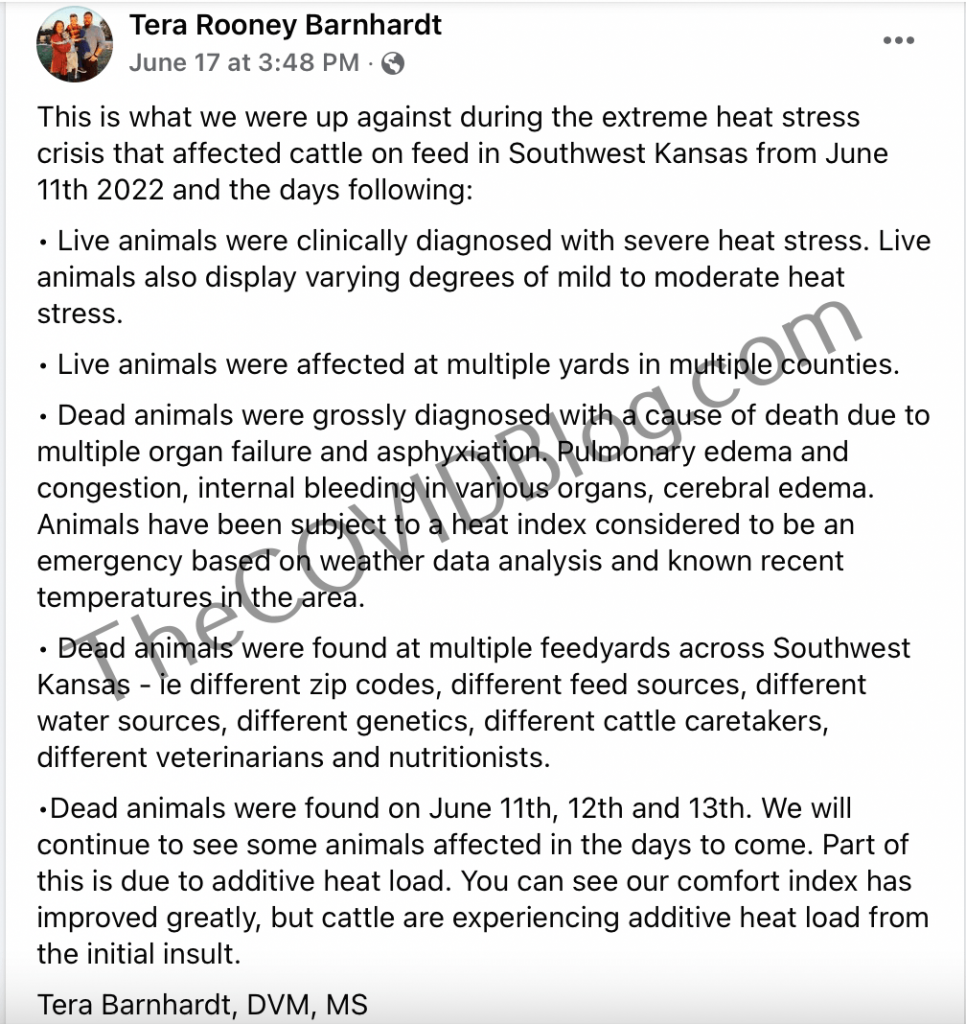 This blogger was born and raised in Iowa (#13 for beef cattle in the USA), the northeast neighbor of Kansas (#6 for beef cattle in the USA). Southwest Kansas isn’t near as humid as Iowa. And in 40-plus years of childhood, teenage years, adulthood, etc. from the mid-1970s to today, nothing like this ever happened in a cattle-producing state like Iowa. It’d be pretty easy to remember if it did happen.

Heat waves, strange heat phenomena, high humidity, etc. happen all the time. In fact as a 10-12-year-old, this blogger detasseled corn in 100-degree heat and 100% humidity, from dusk to dawn, for two summers.

RELATED: Homeland Security “Disinformation Governance Board” halted by the Biden Administration before it could tell you these 8 young people’s deaths are coincidences (May 25, 2022)

Not one human being died in those harsh detasseling conditions. This Kansas mass cattle death was not a natural phenomenon. There is precedent as to what likely happened and we already covered it. Bay County, Michigan police received a strange call from a farmer last September. Said farmer discovered aluminum and scrap metal zip-tied to corn stalks that would ultimately be ground up and fed to cows. Had the farmer not noticed, the cows would have eaten metal shavings and died. No arrests have been made to this day.

All of the dead Kansas cattle have likely already been slaughtered and turned into glue. But authorities should have tested their blood and organs for metal shavings. Unfortunately we’re unlikely to ever know the truth.

Not a week goes by anymore without another mainstream media article promoting the human consumption of “alternative protein,” aka insects. Pilot programs are running in Europe as we speak, which are conditioning children to enjoy eating insects. Forbes published an article a couple weeks ago encouraging people to eat insects to lower their carbon footprints. It’s just a matter of time before McDonald’s is serving the McBeetle and people are buying them in droves.

Cutting through the propaganda

This blogger has been called a “prepper” and has lived off grid for many years, including the van dwelling days. You learn how to eat and enjoy the same things over and over again, and save a few bucks here and there by divesting of materialism and conditioned norms. For those of you who may be struggling to keep cool in these hot summer months of hyperinflation, check out The COVID Blog™ makeshift, very efficient, portable air conditioning unit that anyone can make for less than $30.

Every time this blogger steps foot in a Walmart, he always walks out with at least one more 8-pound bag of pinto beans and another 10 pound bag of rice. Store them all in a basement with no sunshine and cool, dry temperatures; and it last for years. Beans, rice, canned ravioli, etc. may sound lame eating everyday in 2023-24. But it’s far better than a bowl of crickets or maggots.

The Kansas cow slaughter was deliberate, just like all the chicken, turkey, etc. slaughters since 2020. Since our April 25 article covering all these “coincidences,” at least 40 more chicken, beef, turkey and other farms have been destroyed. Here are just a few of them.

Ultimately it all comes down to whether or not you and your family want to continue living in this world. Death is better than eating bugs, especially when you’re lied to every moment of everyday by government and their state-run media. The truth is the easiest thing to recognize in a world of universal deceit. Unfortunately many critical thinkers are afraid of being called “conspiracy theorists” and/or “anti-vaxxers” for believing their own eyes and ears versus propaganda.

It’s your choice. Live by truth and be semi or completely ostracized. Or live a comfortable life of lies and deceit to fit in with the majorities and their imminent deaths by experimental mRNA. The choice is yours. Stay vigilant and protect your friends and loved ones.

The metal shavings on cattle feed needs to be investigated. Who would do that and who do they work for?

I could only get angry and I don’t want to be ruled and commanded by the insane. They insult our intelligence with their fairy tales and lies about “global warming, long covid” and heat death”. If we already know that the climate advocates curse CO 2, then the poor animals (whether cattle, chickens) were all killed by human hands. What I don’t think otherwise. I hate the sick upperbred. An era in which you have to survive when they go completely insane.

I’m very thankful to be kept informed about all this, its tied into Biblical prophecies. Watch Walter Veith’s content, Total Onslaught series (2004), several others since then and his latest, What’s up Prof? Series over 100 vids spanning the last 2yrs and all the major events, including these food shortages and food plants going up in flames. All part of the plan by the PTB, just like Scripture says, famine and pestilence and soon, the mark of the beast. I am glad some like Walter and You Brian help us to know what is going on, I just wish many others would wake up.

“It’s just a matter of time before
McDonald’s is serving the McBeetle and people are buying them in droves.”

You are so right! When everyone was going nuts over Pokémon Go, I thought, “Damn. People (or sheeple, rather) will fall for any idiotic thing going.”

The McBeetle will be no different.

I love you, Brian. Your reporting on this blog is absolutely stellar. ♥️

I’m always excited to see new posts go up on this blog…never know what I’m going to learn. Thanks so much for the video!

One thing that is never a surprise…the high quality of writing here… something I value quite a bit. I force myself to read a little MSM every week to see what latest lie the NWO is serving up. MSM are scraping the bottom of the barrel to come up with writers. MSM articles are riddled with grammer and punctuation errors. I often must read the article several times to make heads or tails of it.

Multiple organ failure? Seems like a stretch to blame on heat.

When I saw this story, I quickly realized that if the heat was that intense where thousands of cows died, why are there not thousands of horses dead as well? and deer, and birds, and fish, and rabbits and people and all the other creatures out in the open in kansas…hot is hot and if the cows can’t avoid it, neither can the other animals…

Hush now!
You should know by now that logic isn’t allowed in this clown world we now live in…

Yes, I believe a lot of people will go along with the propaganda menu du jour just because they are afraid of being labeled a “conspiracy nut job” or whatever. For me, though, the name-calling means absolutely nothing at all. I have family members who think I’m a loon or some sort of fanatic who “reads too much internet stuff.” I don’t care. I get called “stupid” or “right wing fruit case” or “anti-vaxxer” and whatever other name they can parrot at the moment. Don’t care. So maybe it’s easier to believe what is actually true when you really couldn’t care less what anyone else thinks of you. As we move forward in time and propaganda is coming at us fast and furious from all directions, we need to grow armor-plated skin. This is the real #walkaway movement and the only one that will actually save lives.

Brian, thank you for keeping us informed on this topic and for sharing your insights on the cow deaths and how to prep for these crazy times. I love the A/C video and will use it in these hot summer months!! Much appreciation for your contributions from a newly transplanted Midwesterner.