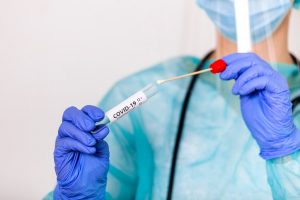 GENEVA — Dr. Kary Mullis won the 1993 Nobel Prize in Chemistry for inventing the polymerase chain reaction (PCR) technique. PCR is “a simple technique that allows a specific stretch of DNA to be copied billions of times in a few hours.” Dr. Mullis made clear that PCR is not a testing tool for diagnosing disease. He said PCR “can find almost anything in anybody” if it’s done well.

Dr. Anthony Fauci is the Chief Medical Advisor to U.S. President Joe Biden. Fauci is also a media darling who is considered omniscient and omnipotent in virology and epidemiology. Dr. Mullis butted heads with Fauci throughout their careers, particularly surrounded the HIV/AIDs epidemic. The Nobel Prize winner once challenged Fauci to a debate on virology and epidemiology. Fauci declined.

The Nobel Prize-winning PCR inventor died in August 2019, right before COVID-19 came onto the scene. His PCR invention has since become the gold standard “test” for diagnosing COVID, despite the technique not being a test at all.

How PCR works in relation to COVID testing

Kim Schive, editor at the Massachusetts Institute of Technology, provides the most comprehensive, yet simple explanation as to how PCR is applied to COVID-19 testing.

The PCR test analyzes samples by amplifying viral RNA in cycles. Most tests, like the Broad Institute test used by MIT, use a 40-cycle protocol. If the virus isn’t detected within 40 amplification cycles, the test result is negative. If viral RNA is detected in 40 cycles or less, the PCR machine stops running, and the test is positive. Because you received a positive result, we know that the test detected the virus in your sample by the time it reached its 40-cycle limit.

But as we learn more, this binary way of viewing test results — positive/negative, infected/not infected — may change. After all, the amount of virus in a sample is directly correlated with the number of amplification cycles needed to detect it, a number known as its cycle threshold (Ct). A positive test that comes back positive in 20 cycles contains a greater amount of virus than one requiring 40 cycles. Right now, we just call both results “positive.” But it’s obvious that the first sample came from an individual with a higher viral load. And the greater the viral load, the more contagious the patient is likely to be.

As Dr. Mullis explained in the video above, his invention can find anything if you do it well enough. Or in the case of COVID-19 “testing,” if you keep doing it until you find what you’re looking for. The New York Times published an article in August reporting that 90% of positive tests in three states were from asymptomatic people who were unlikely to get sick.

Most COVID PCRs use 40 cycles of amplification, with each cycle doubling the DNA target, according to Yale Medical School.  But even Dr. Fauci admitted back on an August 2020 podcast that a positive test over 36 Ct’s is “dead nucleotides,” a false positive.

Despite his own mea culpa, the United States continued testing at 40+ Ct’s. The United Kingdom was using 45 cycles.

A landmark ruling by the Lisbon (Portugal) Appeals Court related to PCR testing was largely ignored by mainstream media. The November 11 decision found that the Azores Regional Health Authority violated Portuguese and international law. The agency forced four German tourists to quarantine in a hotel all summer due to a “positive” PCR from one of them.

The ruling was a scathing rebuke (English translation here) of the improper use of PCR for COVID testing. The judges noted, “In view of current scientific evidence, this test shows itself to be unable to determine beyond reasonable doubt that such positivity corresponds, in fact, to the infection of a person by the SARS-CoV-2 virus.” The ruling relied on a meta-analysis by the University of Oxford’s Centre for Evidence-based Medicine (CEBM) and the University of the West of England.

The Court essentially found that there is reasonable doubt that PCR is a reliable test for COVID-19.

The World Health Organization recently updated its guidance for utilizing PCR for COVID-19 testing. Some are calling it a politically-motivated move. The update came just hours after President Biden was inaugurated.

“The cycle threshold (Ct) needed to detect virus is inversely proportional to the patient’s viral load,” the January 20, 2021 Information Notice says. “Where test results do not correspond with the clinical presentation, a new specimen should be taken and retested using the same or different NAT technology.” In other words the WHO said that the more cycles in PCR, the less reliable the test (inversely proportional). The CDC was still recommending 40 cycles as recently as December 1, 2020.

President Biden signed an executive order reversing the United States’ withdrawal from the WHO under the Trump Administration. The EO also made Anthony Fauci head of the U.S. delegation to the WHO. Several outlets are suggesting that the change has political implications. The new guidance will unquestionably lower positive COVID cases, just as President Biden is taking office. California Governor Gavin Newsom and New York Governor Andrew Cuomo have indicated their states will re-open. Both had been lockdown hardliners throughout the Trump Administration.

The United States, in accordance with the 40 Ct PCR threshold, has recorded over 25 million COVID-19 cases since the pandemic began.

[…] February 28, 2021  Our January 26 article, “World Health Organization’s updated guidance for PCR COVID-19 testing will likely lower positive c…” is coming to fruition.  The WHO changed its policy for utilizing the polymerase chain reaction […]