NEW YORK — We wrote last week about all the ridiculous mainstream media propaganda campaigns attempting to normalize heart attacks and sudden deaths in young people. The headlines are incredibly asinine and insulting to intelligent people. Now the New York City Fire Chief wants everyone to believe that a young, trained firefighter failed to recognize potential injuries and died from his own negligence.

Mr. Jesse Gerhard had one goal from the time he was a child – to be a firefighter. The-33-year-old began his career with the New York Fire Department (“FDNY”) in 2014 as an emergency medical technician (EMT). He graduated from the Fire Academy in April 2018, and fulfilled his lifelong dream when he was assigned to Engine Company 264 in Far Rockaway.

The 33-year-old battled a 2-alarm fire at 25-43 Beach Channel Drive in Far Rockaway on February 15. It was nothing out of the ordinary for a firefighter. He went home that night as normal, uninjured and resting up for another day of work with the busiest fire department in the United States.

Mr. Gerhard was working the night shift the following day, February 16. But around 11 p.m., he collapsed at the fire station. His colleagues immediately administered CPR before an ambulance rushed Mr. Gerhard to St. John’s Episcopal Hospital. He died a short time alter. The FDNY said he suffered from a “sudden medical episode.” 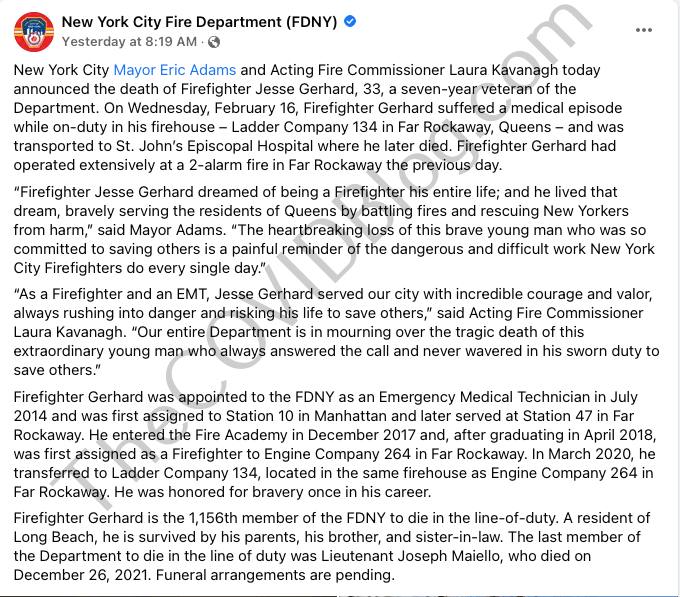 But most of said news outlets backtracked thereafter, and are now saying the cause of death is unknown. FDNY Chief John Hodgens tried pushing the idea that a young, well-trained trained firefighter somehow died of smoke inhalation more than 24 hours after he battled a fire.

The 2020 Firefighter Fatalities report by the National Fire Protection Association found that 140 firefighters died on duty in the United States that year. So-called COVID-19 was blamed in 78 of those deaths. Four of said deaths were due to smoke inhalation. All of them were at the actual scene of the fire. The report also found that sudden cardiac arrest is the most common cause of death for firefighters. But nearly two-thirds of those victims in 2020 were over age 45. None were under age 35.

Mr. Gerhard is the third FDNY firefighter to die on duty since December. Mr. Vincent Malveaux was a 31-year-old trainee at the Fire Academy on Randall’s Island. 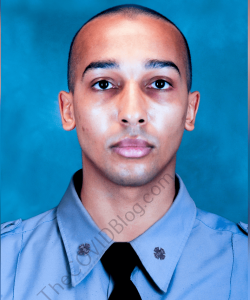 He died on December 2 after suffering from a “medical episode” during the training course. Mr. Joseph Maiello was a 53-year-old firefighter in Staten Island. 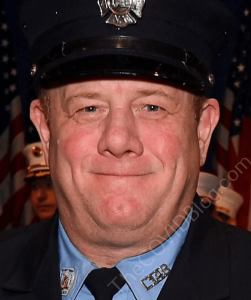 He was found dead on-duty at the firehouse on December 26. NY1 reported that he died of “heart disease.”

New York firefighters have been against the city’s vaccine mandate from the very beginning. Andrew Ansbro, president of the Uniformed Firefighters Association (New York Local 94), said in October that his organization would never accept the mandates.

But more recently, Uniformed Fire Officers Association (New York Local 854) President James McCarthy called for an investigation into the three recent deaths. He told the New York Daily News that there may be a possible link between the deaths and the injections.

“That’s a significant amount of people in a very short time. The vaccine is a concern with our members because it is something new that is being put into our bodies. It could be a factor.”

Mr. McCarthy demanded that the FDNY provide his organization with the vaccination status of all three men at the time of their deaths. About 2,300 New York City fire personnel called out sick on November 1 when all of them were required to have at least one shot to return to work. A total of 1,500 New York municipal workers, including 25 firefighters, were fired last week for failing to comply with the vaccine mandate.

Just last week, we wrote about the sudden passing of Alameda County Sheriff’s Deputy Aubrey Phillips. Another Bay Area cop, Freddie Bobbitt, Jr., of the Fremont Police Department, “died unexpectedly” on Monday. The department’s Instagram page wrote that officers were “in disbelief and shock” by the 54-year-old’s death. 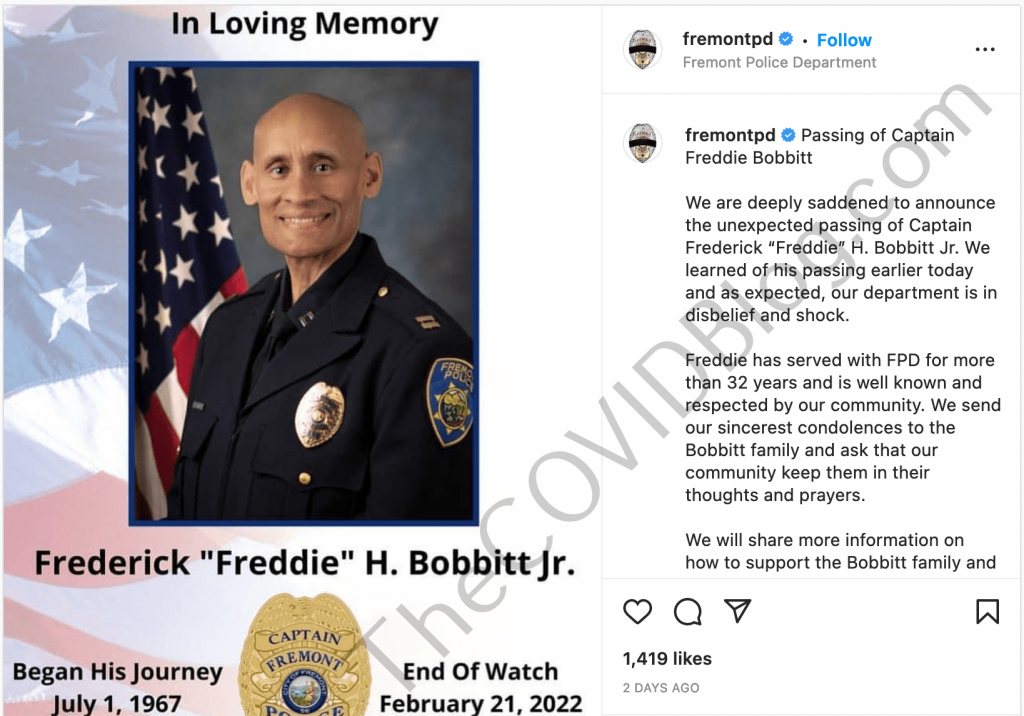 Fremont is in Alameda County and subject to the jurisdiction’s vaccine mandate for first responders.

San Diego firefighter Nickolas Ramirez died on February 16 due to “complications from COVID-19.” He was fully-vaccinated, according to his long-time friend and colleague, Mitch Mendler. Thus the “vaccines prevent serious illness” fallacy is once again proven wrong. 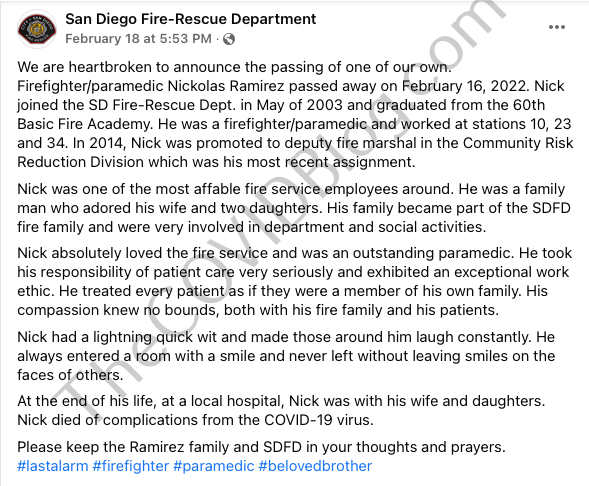 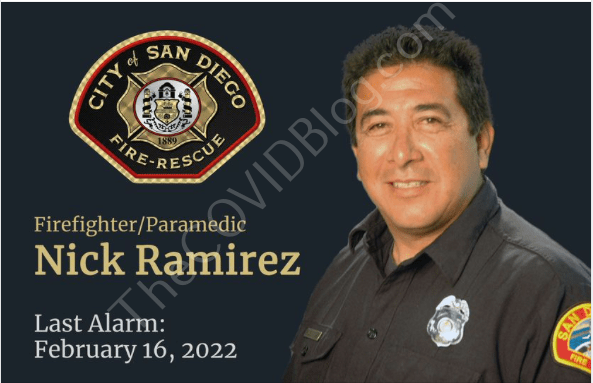 Further, all San Diego city employees had a January 3 deadline to be fully-vaccinated or terminated. Mr. Ramirez was admitted to the hospital in late January and never left. He was set to retire from the department within weeks.

Mr. Matthew Dizney was a 36-year-old in New Britain, Connecticut firefighter. He “unexpectedly passed” at his home on January 26, according to his obituary. Connecticut Governor Ned Lamont issued an Executive Order requiring all state workers to have at least one injection by September 27. It’s unclear if the City of New Britain has a vaccine mandate for employees. But Mayor Erin Stewart is a die-hard vaxx zealot who urges kids to roll up their sleeves.

We know doctors are dying at unusually high rates since 2021. Mainstream media workers and celebrities are also bearing the brunt of these deaths and maimings. But now we’re seeing an uptick with cops and firefighters. Granted there are many people who don’t care about cops. But firefighters are vital pillars in communities. They are truly brave, selfless heroes that deserve respect.

We’ll likely start writing summary-type articles like this as these firefighter/cop deaths continue rising. It’s only February. But 2022 is looking like the year of carnage during The Great Reset.

Thank you for all of the work you do, Brian putting this all together. My mother’s father was a lifelong firefighter in Cleveland, Ohio. When Grandpa died of a heart attack at 84 the Cleveland Fire Department really came out with a line of hundreds and a 21 gun salute. They usually watch out for their own. It’s completely nuts for the media to blame the one death on smoke inhalation 24 hours later. They really are running out of explanations..

Most of those “line of hundreds” were only there because they get overtime.

Indeed. Talk about the BS of 911 to NYC firefighters and they either become suddenly deaf, or run away like pussies. Bureaucrats scare them like no other creatures on earth.

On 911 anniversaries, they all put their uniforms on and partake in making the 911 infamy, a holy official lie, year after year.

People readily embrace lies that seduce them (21 gun salute, rituals, symbols,…). Anyone challenging their BS, is their enemy.

Firefighters are brave people. It’s a shame that the local and state governments of the the cities and communities they service forced these deadly mandates. It’s also a shame the unions did not back their members, ALL their members. Now the best are fired for taking care of their health and the rest remaining are at a real risk of illnesses, injuries and death. A real clusterf–k! Maybe even a little of CYA as questions and the truth start coming out.

I wish people realized that nothing is worth losing your health. I’m so sorry they were put into this predicament, and have no recourse against the entities that mandated the poison that maimed them, or worse, cut their lives short. I mourn for them and their families.

These events are happening across the world and few are connecting the vaxx as the cause. The censorship of any information is working. I told a customer whose son is suffering from heart issues that only lately appeared to ask her doctor about vaxx side effects. She had no idea and the battery of doctors he went to never said a thing. Just “we do not know the cause of his heart issues.” Frustrating.

How are firefighters even in need of a vax? Is the fire going to catch covid?

I’ve seen a few firefighter deaths in the Central New York obituaries in recent months. In fact, recently I noticed a billboard on Interstate 81, advertising the need for volunteer firefighters. Not to say that billboard wouldn’t have been put up regardless of the recent deaths, but it’s awfully coincidental with the timing of all of this.

Died Unexpectedly is rapidly becoming the epitaph for the great reset’s covid spread and medical responses.