LADERA RANCH, CALIFORNIA — An Orange County mother-of-three and real estate title agent believed her actions would protect others and provide job security. Now she prays everyday for some semblance of normalcy after a six-month nightmare with no end in sight.

Ms. Jenny Porter describes herself as a devout Christian. Physical fitness has always been a part of her life. Her dad was a horse jockey, and raised her to view fitness as a way of life and not just an activity when you need to lose weight. Ms. Porter also loves her job, and “felt pressure within my industry” to receive the injections. She believed she’d lose clients if she did not succumb to the pressure.

Ms. Porter did a lot of research, but conceded in the aftermath that she only used Google. “You’re only going to find what they want you to see and want to know,” she said on a February 16 podcast with Kat Donahue. By the time she discovered that the terms “web search” and “Google” are not synonymous, it was too late.

Ms. Porter received the Pfizer mRNA injection on August 24 at Bushard’s Pharmacy in Laguna Beach. The batch number, FA6780, is associated with at least 36 life-threatening illnesses, disabilities, and/or deaths, according to the How Bad Is My Batch database.

Within 48 hours, Ms. Porter suffered from debilitating diarrhea, vomiting and pain that “felt like knives” stabbing her abdomen. She also suffered “severe cognitive impairment,” to the point that she couldn’t  process and understand spoken words from other people. Fine motor skills were also impaired. She couldn’t type or even pick up and hold a pen to write something. All of her limbs went completely numb, leaving her unable to walk.

Ms. Porter finally went to a doctor on September 6. Of course the first thing they did is test her for so-called “COVID-19,” which was positive. Despite all of the foregoing symptoms, doctors prescribed antibiotics and discharged her. By September 17, Ms. Porter had gained nearly 25 pounds from toxic fluids filling her body. She also developed head-to-toe rashes from several newly-acquired allergies that she never had before the injection. Ms. Porter was officially diagnosed with multi-system inflammatory syndrome (MIS).

RELATED: Michael Granata: 56-year-old California man dead 10 weeks after Moderna mRNA injection, warns others “don’t do it unless you want to suffer and die” (November 11, 2021)

MIS causes all of your internal organs to swell. Some of the most horrendous stories of suffering on this blog are the result of post-injection MIS.

Ms. Porter has been on disability and unable to work since September. Her kids spend most days with their father because they are terrified seeing their mom in this condition. Ms. Porter spend 80% of her waking hours lying in bed because she cannot walk. Even when she tries to walk, the pain is excruciating. Doctors did finally admit that her condition is a vaccine injury. But they have no answers and no real treatments for her.

Ms. Porter kept her vaxx injury quiet until earlier this month. She created an Instagram profile and is telling her full story. Nearly every photo is her lying in bed on her back. The other photos shows the pain killers that she takes “by the hand-fulls” just to function. 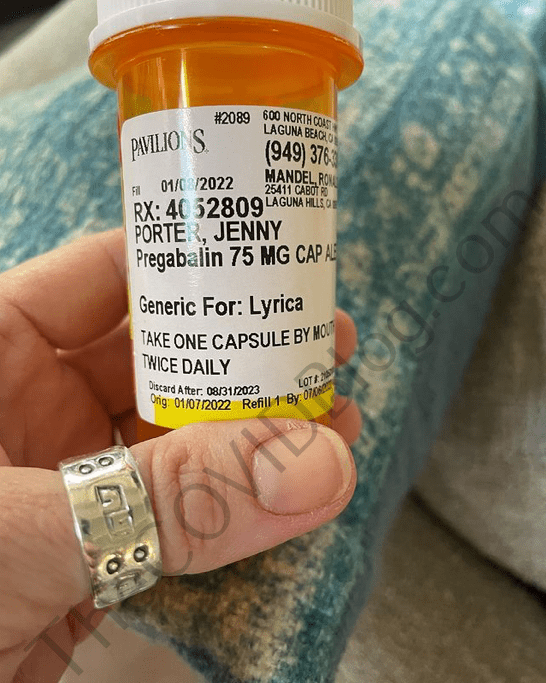 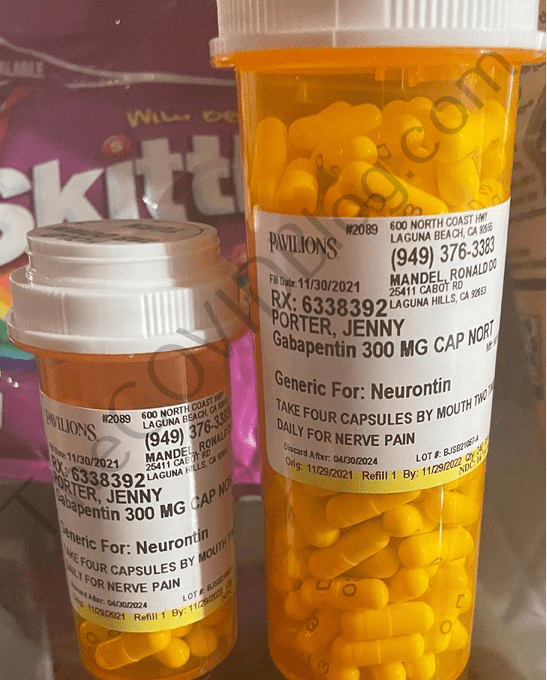 She is at least the fourth vaxx victim covered here on The COVID Blog™ to mention Dr. Mark Ghalili, who is absolutely cashing in on this global human tragedy. 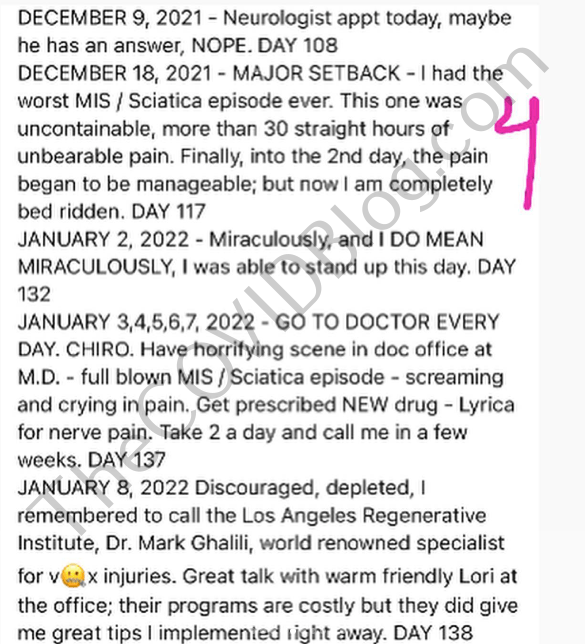 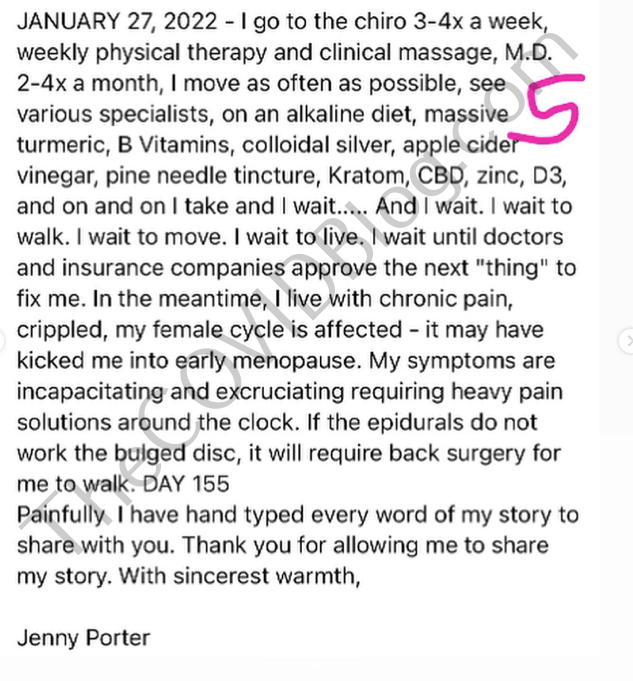 Ms. Porter declared that she is “not anti-vaxx,” but instead pro-choice. She wants people to know that if they decide to receive the injections, this could happen to them too.

Ms. Porter had an epidural earlier this week to, hopefully, provide pain relief. But it didn’t trigger the desired effect; and now she’s in more pain then she was before.

Ms. Porter remains as positive as possible, and does everything with a smile. 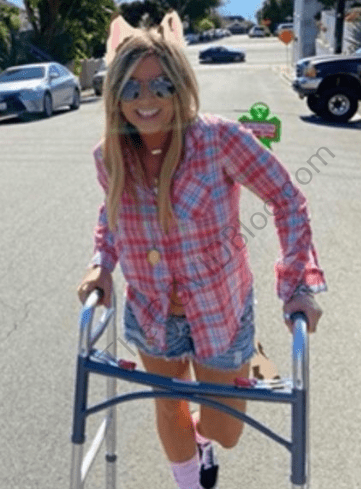 Her latest update, however, paints an ominous portrait of both her present and future. 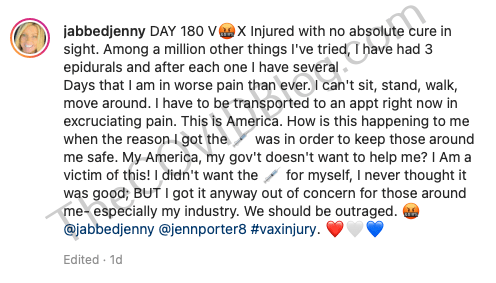 A GoFundMe page is collecting funds to help with her medical expenses.

Burdens on society in The Great Reset

Ms. Porter is very similar to nearly all surviving victims covered on this blog. She had a great career, loved life, had dreams, etc. Now she realizes that there are many little things in life that all of us take for granted (e.g. walking, living pain-free, etc.). Ms. Porter cannot shower on her own, cannot drive herself to the supermarket, and cannot even remember what it’s like to wake up pain-free.

There’s no way of knowing how many formerly-healthy, independent people, prior to 2021, are now completely and 100% dependent on others. The human toll of The Great Reset goes far beyond deaths.

Ms. Porter was a productive member of society, spending and making money in a capitalistic system, taking care of her kids, etc. The harsh truth is that she’ll need people to help her with everything for the rest of her life. Same with Ms. Kaitlin Endres, same with Ms. Valerie Milford, same with Mr. Brad Malagarie, etc.

Western society was set up to take care of people age 65 and over who can no longer take care of themselves. But this mass influx of people under-40 permanently disabled from the injections is a new dynamic. Ms. Porter is lucky to have friends and family to help her. Further, like many others, she kept her injuries secret for fear of backlash. Millennials are by far the loneliest, friendless generation alive. It begs the questions – how many young people are suffering in silence right now? Time will tell.

I’m sorry for this young woman. She has my prayers.

Jenny, there are PLENTY of people outraged, but the MSM and large tech portals are muting us for the most part. If you had used something other than the Goggle, maybe you would have known that – just sayin.

All idiots… And how many others did they try to force to take the poison jab….. Should have her children taken away they are in danger … Did she suffer a brain injury at some point in her life SCAMDEMIC 💉☠️🧃👹🤬💲

The enemy often shoots to wound as it takes others off the battlefield.

As sad as it is that this has happened to this poor lady she hopefully has learned a valuable lesson. Her decision to take the needle at a time when plenty of information existed about its dangers is mind boggling. I wish her well and hope she finds some comfort

Her decision to take the needle at a time when plenty of information existed about its dangers is mind boggling
even more so when you ‘factor in’ that most countries/jurisdictions are, now, ‘winding back’ mandates, requirements and restrictions….

David does not back down
Reply to  AUssie pub` brawler

Yes they are rolling back the mandates it seems everywhere. Even my job has now said masks are voluntary gassed or not. While this is good I can’t help but feel a very Eerie foreboding feeling. Like they figured this is all they can get and they are about to intensify everything. Like this is the calm before the storm…

“Jenny Porter: California real estate worker develops Multi-system Inflammatory Syndrome two days after Pfizer injection, now bedridden in excruciating pain”
yeh…………..
its what these satanic NWO/(((Illuminati))) mo-fo`s do….. ☹
its how these satanic scum roll….
my advice to her is: get some REVENGE, girly….
(shouldn’t be that hard to acquire the actual ‘means’ to do so in the US, eh?)

Maybe some people are given tainted injections on purpose for medical research. I wouldn’t put anything past FraudFauci, the CDC and BigPharma. They should burn in hell.

I refuse to send money to GoFundMe after seeing what they did to the CanadianFreedomTruckers. They are thieves. “GiveSendGo” gives 100% of funds and is free. Hopefully, more people will use this instead of GoFund.

These vaxx injuries are horrible. And I am seeing and hearing about it more and more. Some days I just tune it out as it becomes overwhelming to me. The emotional toll is there too. I have always stood as anti vaxx even through all the pressure put on you to get it. It was hard as often I stood alone. I always thought I would say I told you so to the vaxxers when these side affects started to happen. But it is just too sad and awful. I can only hope they get some relief and may God bless them. 🙏

The most important thing is that she is not “anti vax” and that she will remain under the good graces of facebook, twitter and the others who are similarly in love with the system and the demons running it.

Yes, thank God she is anti-vax. She can keep a certain percentage of her upvotes now that can be traded for self-dopamine. Oh, heaven’s blessing.

Are you anti-poison? If so, then you are anti-vax.

“Ms. Porter finally went to a doctor on September 6. Of course the first thing they did is test her for so-called “COVID-19,” which was positive. Despite all of the foregoing symptoms, doctors prescribed antibiotics and discharged her.”

So, why would doctors prescribe antibiotics for a COVID-19 which is a viral infection? Many doctors seem to be ignoring any possible complications from the vaccine and trying to attribute it to something else.

A couple reasons, maybe? Covid-19 can frequently go into a secondary infection (I’ve seen it go into double pneumonia, strep, and sinus infection in friends/family). So maybe the doctor was prescribing thinking that at this point in her symptoms it had gone into something secondary. Second, the frontline protocols recommended (not that mainstream doctors follow these) include HCQ/zinc/azithromycin, or ivermectin/zinc/azithromycin. Azithromycin is an antibiotic but I do trust the frontline doctors who are recommending this protocol. I had huge white puss spots in my throat when I had Covid and while I have no proof, I do wonder if it would have gone into strep like I’ve seen with others had I not started on the recommended protocol.

Such a sad story. It is strange also that she is a Realtor; but does not own. She rents and has to look for another place to move to and is saying the landlords are afraid to rent to her. I hope she has family she can stay with and that can help her. So sad…

Her boyfriend isn’t stepping up either.

LoL those giant ‘super-saver’ sized pill bottles frighten me.
And unfortunately I’m pretty sure physicians are just throwin’ stuff at the wall, to see maybe something will stick? They don’t have a clue!
Maybe she should stop with all the bizarre medications (although it’s very un-American, I realize).

There seems to be some success with people taking ivermectin and black seed oil to suppress vax injury symptoms. I didn’t see that mentioned in her cocktail. Might be worth a try.

Perhaps she may like to try zeolite. It has helped me by removing heavy metals. My hearing, eyesight and sense of smell are better. There is a wild lettuce plant that helps with pain. Hope you have some luck in feeling better. God bless!

MIS usually affects CHILDREN but it’s listed in the Pfizer FDA side effects due this poison dart… a Dr in Tennessee DIED from it shortly after his jab💉 (of COURSE it was reported as “covid complications.” 😡