AUBURN, CALIFORNIA — A Northern California sheriff’s office is being criticized for reporting exactly what happened in its jurisdiction.

The Placer County Sheriff’s Office published a post on Facebook about a local resident who was administered a COVID-19 vaccine. The resident died several hours later, according to the sheriff’s office. 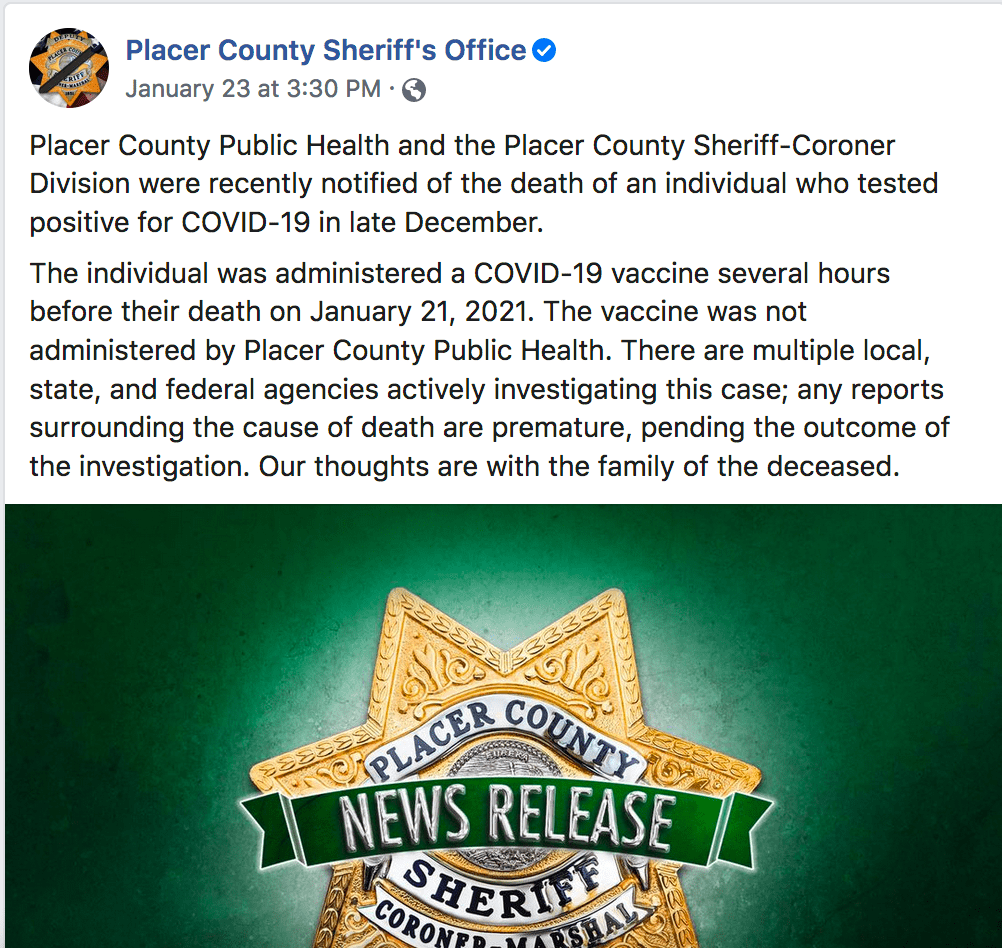 Angela Musallam, spokeswoman for the sheriff’s department, said in a statement that her department released the information in the name of transparency. The death occurred last Thursday. The department announced the death on Saturday. Several Facebook users criticized the department for the announcement. They called the Sheriff “irresponsible” for connecting the mRNA shot and the death. But the death happened just two hours after the shot was administered.

Dr. George Rutherford, infectious disease head at University of California San Francisco, told the Sacramento Bee that people should wait for the autopsy before passing judgment. “It could be anaphylactic, or it could be something completely unrelated,” he said. It’s becoming clear that the nation’s doctors have a much different approach when it comes to deaths related to COVID-19 versus deaths related to COVID-19 “vaccines.”

U.S. COVID-19 deaths have averaged 2.9 comorbidities, according to the Centers For Disease Control (CDC). That means at least three other ailments could have caused the 425,000 deaths being reported as COVID-19. Each of these deaths is recorded as definitive COVID-19 without autopsies, skepticism or debate from the public or the medical establishment. Meanwhile every mRNA death thus far is dismissed as “old age” or something unrelated to the shots.

No further information is available about the victim as of publishing. Placer County is in northeast California. It is part of the greater Sacramento area and stretches to the Nevada border.

Now almost the Beginning of September 2021 we are seeing an increased rise in deaths of once perfectly normal and healthy people are vaccinated, thanking those who choose to be open and share what they see…God watch over us in this crisis!

Thank you for bringing this to my attention; I had not seen this article previously. What you say is spot-on. Here we are months down the road and the truth (there’s the “T” word!) is being suppressed, and many people have been killed by the toxic jabs, or permanently injured. I encourage all those who know the big “T” about the jabs stand strong vs. the blackmailing mandates. Resist and speak up, fight back, together.