UPDATED June 2, 2021 – We received this email from someone claiming to be named Dr. Blaine Keigley. 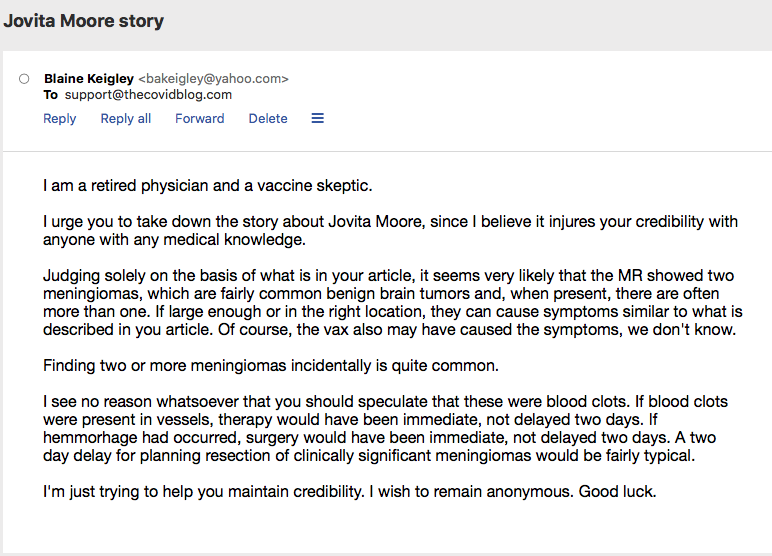 He is “trying to help [us] maintain credibility” and wishes us luck. Blaine says if blood clots were potentially present and not tumors, then surgery “would have been immediate.” He’s correct.

The family of Mr. Clive Haddon wishes doctors understood this. Doctors told Mrs. Lisa Stonehouse to take Tylenol after she exhibited blood clot symptoms. Both of the foregoing are now dead because doctors failed to perform “immediate” surgery. Blaine should spend his time educating his fellow doctors, and speak up on the world stage, instead of “trying to maintain our credibility” in this cowardly fashion.

The COVID Blog always likes to keep readers in the loop as to what goes on behind the scenes.

ATLANTA — A 52-year-old new anchor is still recovering from a condition that mainstream media and her fans are dismissing as pure coincidence.

Ms. Jovita Moore is the evening news anchor for WSB-TV Channel 2 News in Atlanta. She’s worked at the station since 1998 and has held the evening anchor position since 2012. Ms. Moore received the second dose of experimental Pfizer mRNA on April 2, according to her Facebook page. Her Facebook post that day is full of sad, dramatic irony.

She said that she wants to lead by example and help those who are undecided make their decisions about the shots. Ms. Moore also said she will be outside again in 10 days when she’s “fully vaxxed.” She also said she is excited about hanging out with fellow “vaxxed” friends, but will still wear masks out on public. 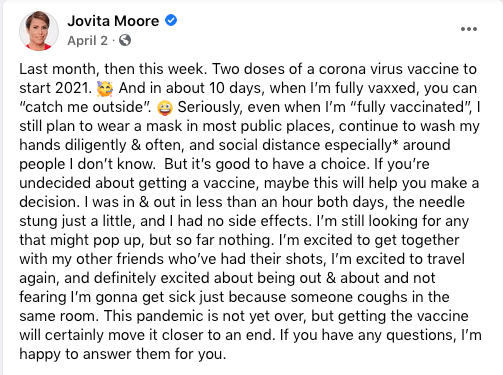 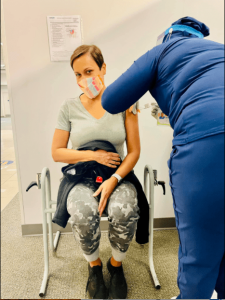 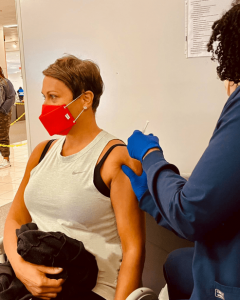 Left is the second shot from April 2. Right is the first shot in March.

Things quickly spiraled downward from there. Ms. Moore told her Channel 2 co-anchor Justin Farmer that she was suffering from headaches on Monday, April 12. She told the news station that she was suddenly “forgetful, disoriented and just not feeling like myself.” She reported almost losing consciousness and passing out at a grocery store later that evening.

Doctors performed an MRI on Tuesday, April 13 and found two tumors in her brain. She described them as “masses.”

She underwent brain surgery on Friday, April 15. Ms. Moore was discharged from the hospital on or around April 30. Doctors gave her a recovery time of eight to ten weeks after surgery. If that’s the case, she should return to work at the beginning of July.

Ms. Moore posted a family photo to Instagram on Mother’s Day, Sunday, May 9 and thanked everyone for their well wishes. All of her social media accounts have been silent since that time. There have been no further updates from Channel 2 either.

None of the mainstream media outlets that have covered this story mention the experimental mRNA shots at all.

Ms. Moore has worked in mainstream media for more than two decades. She knows her role not only at Channel 2, but also as an ally of big pharma. She mentioned nearly every symptom that screams blood clots in her brain as a result of mRNA shots. Granted mainstream media focus on AstraZeneca and Johnson & Johnson viral vector DNA when they speak of “rare blood clots.” But Pfizer causes blood clots with about the same frequency.

Ms. Moore made certain not to say the word “blood clots” as likely instructed by her employer. She also has not said the word “cancer,” or at least said that her tumors were benign. But let’s, for the sake of argument, say she did in fact develop brain tumors just two weeks after the second experimental Pfizer mRNA shot. The American Cancer Society says exactly this:

Brain and spinal cord tumors, like other tumors, are caused by changes in the DNA inside cells. Cancers can be caused by DNA changes that turn on oncogenes or turn off tumor suppressor genes. These gene changes can be inherited from a parent, but more often they happen during a person’s lifetime.

It’s usually not known why people without inherited syndromes develop brain or spinal cord tumors. Most exposures that cause cancer, such as chemicals in tobacco smoke, somehow damage DNA. But the brain is relatively protected from most cancer-causing chemicals that we might breathe in or eat, so these factors are not likely to play a major role in these cancers.

The Mayo Clinic also says brain tumors form “when normal cells acquire errors (mutations) in their DNA. These mutations allow cells to grow and divide at increased rates and to continue living when healthy cells would die. The result is a mass of abnormal cells, which forms a tumor.”

Obviously synthetic mRNA and DNA viral vectors are gene therapy, no matter how many times Fauci and mainstream media shamelessly deny it. If Ms. Moore did in fact develop brain tumors as a result of the experimental gene injections, it is a first, at least as far as our coverage.

The clinical trials for all these experimental shots are ongoing through 2023 and longer. We’re all learning in real-time as millions of human guinea pigs proudly volunteer as test subjects, and virtue signal their ways to a little social media clout.

It’s up to all of us to keep our feet on the gas pedal. This entire COVID-19 agenda is crumbling as the truth continues overtaking mass manipulation. Do your part by continuing to share and discuss this blog. Stay vigilant and protect your friends and loved ones.

COVID Legal USA is extremely busy helping Americans fight back against mandatory vaccines for employment and other COVID mandates. Contact us today and a legal writer will get back to you within 24 hours.

Fight back against censorship. PLEASE SUPPORT US VIA PAYPAL.

Surely, this can’t be another one of those ‘coincidences’?

I’ve come across other ‘coincidences’, mainly from a link share to a FB vaccine injury discussion group that recently cut off outside access. One was a report of a middle-aged man with a brain tumor (glioblastoma) diagnosis shortly after receiving a covid vaccination. I also noticed some reports of lymphoma diagnosed in the days and weeks following the jab.

As far as mechanism behind cancer development goes, one possibility comes from research showing the spike substantially damages mitochondria structurally. Mitochondrial damage has been shown to be a main driver of cancer (Dr Thomas Seyfried et al). In addition, the DNA the mitochondria itself contains is far more vulnerable to damage compared to nuclear DNA which has multiple layers of protection.

Really sad & awful to see all these vaccinated “victims” and how deadly and severe the side effects are ( more & more blood clots, strokes, etc)
Thanks so much for posting all these articles! It is good to know about all these victims of the experiment vaccines . Really heartbreaking & sad.

What is even sadder is that they refuse to admit the mRNA was the cause of their medical issues after the shot. But I bet deep down in their hearts they know they just made a terrible mistake and will likely have medical problems if not dying prematurely in their near future. Especially those women who miscarried their unborn children right after receiving one of these shots. Then to top it off encouraging other to follow in their footsteps. That is really the heartbreaking part.

The “Same Frequency as the General Population” is BS! I just reviewed the teen/tween information that they released, about 50+ page PDF file. I’m an engineer, and understand how to read these studies and statistics. Anyways, FOUR kids came down with Bell’s Palsy and Zero in the Control Group. They claimed that four was the same frequency seen in the general population, WHICH WAS A LIE! So, I searched for the odds of Bell’s Palsy in the general population, and it’s between 20-22 in 100,000. Pfizer had 4 in a little over 1,000. I calculated it out, and Pfizer recipients have a 20-times greater risk of Bell’s Palsy then the General Population! How do they get away with such out right lies? Does anyone at the FDA understand how to do simple math, and look up the claims made in these “Made to Pass” studies?!?! I found way more tomfoolery in the study too! They cherry picked which group they wanted to use. When it suited, they would add the trial participants from the original flawed study. Then, they would only pool 100 kids out of the 1,000 in the study to make other claims! It’s the biggest rigged study in history! I’m embarrassed that nobody at the FDA/CDC or medical industry is looking the other way!

Miss Allaneous
Reply to  None Yun

Thank you🙏 for this analysis!!

Leonie
Reply to  None Yun

Thank you. With the “errors” they commit no student would pass an exam.

Actually, If Ms. Moore did develop brain tumors as a result of the experimental gene injections, then this is even worse than “just” blood clots.
Because that means – as the article points out –
﻿that these injections cause changes in the DNA inside cells.

I don’t find it sad at all. I think it’s hilarious. She’s been disseminating propaganda for decades.

Hackers have reported that half of the mRNA in vaccines is defective.

Thank you for reporting – though I am not sure I understand: What does “defective” mean. Is it that half of the injections is placebo by injection, so that not so many people die at once.

RE: “defective”, we’ve known for over a year the whole spike is very dangerous as an ACE activator and its many sub-sequences now identified as toxins, immune system triggers, and close matches to human proteins (autoimmunity and ADE risk).

Are the tumors malignant? Do they grow to detectable size in two weeks? Or could the vaccine have triggered growth spurt of some pre-existing tumors ? Scary…

My room mate received the second vaccine middle of April. The fist few days he felt like he was hit by a bus. The second week he developed a dry cough which is lingering around, and became part of his daily life. His joints just started to hurt him severely, now almost 2 month after vaccination. He is sleeping throughout the day because he feels very lightheaded and too ill to stand on his feet. In the morning when he does not get up, I am worried that something maybe happened to him over night. All his current ailments he is blaming on anything else, but not the vaccine! People got so brainwashed, that they can not think for themselves anymore! He is telling me that if a third vaccination comes out, that he will get it too! I also got sick the days after he received the vaccination. I felt also that I got hit by a bus. That feeling lasted about one week. I can see him going downhill, but unfortunately there is nothing that I can do! All my family got vaccinated. I told them not to get vaccinated. I gave them all the information that I had available. Tons of information! I am a research expert. I got yelled at to mind my own business, and that I was told that I will end up in the mental hospital if I keep believing in the conspiracy stuff. My former school teacher was forced to go to the mental hospital about 6 month ago because she expressed too much of her personal opinions to her high school students, so parent, or whoever it was, reported her! She still has not been released! There are things taking place in this country and world that feel very scary to me, and I have seen life from many different perspectives, with all ups and downs, but this is too much!