OTTAWA, ONTARIO — A 25-year-old University of Ottawa football player is dead, in what is likely to be a disturbing trend in amateur and professional athletics in 2021. 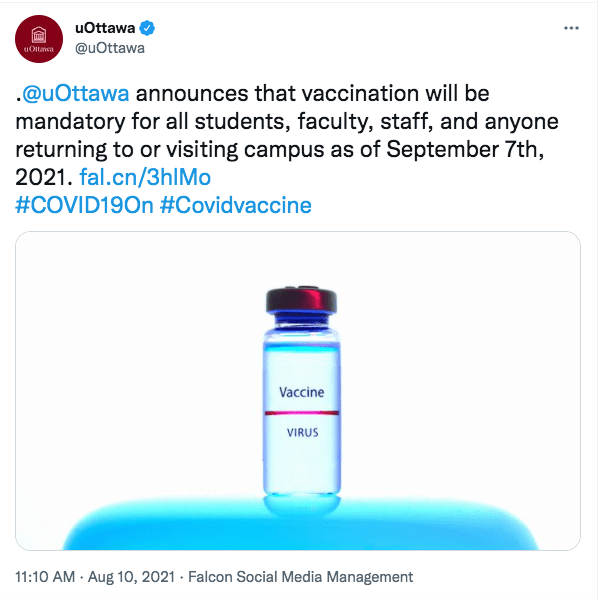 All Gee-Gees (school mascot) athletes were required to receive their first mRNA or viral vector DNA injections by August 1. Non-compliance results in “[removal] from the team’s roster and lose access to all the privileges afforded to student-athletes including team or individual training, competition or any Varsity Integrated Support systems,” according to the university website.

Of course the university offers “accommodations for medical conditions or other grounds protected by the Ontario Human Rights Code.” But as we’ve seen here in the United States and elsewhere, students, employees, and others must take their respective university or employer to court to force compliance with exemptions.

Mr. Francis Perron was a 6’1, 240 pound defensive lineman for the Ottawa Gee-Gees. All fall sports were cancelled in 2020 due to “coronavirus safety concerns.” The Gee Gee’s continued the football team training programs last year to keep athletes sharp and in-shape. But even that was cancelled in October 2020 after five players tested positive for COVID-19. The players were itching to get back on the field in 2021 after the long layoff.

The Gee-Gees played their season opener at the University of Toronto Varsity Blues on Saturday, September 18. It resulted in an uneventful 11-10 loss for Ottawa.

Mr. Perron recorded one solo tackle in the game. It was the last tackle he’d ever record.

CTV News reported that Mr. Perron died “shortly after the Gee-Gee’s first game.” The National Post, a Toronto-based Canadian daily newspaper, reported Mr. Perron died “without warning.” Neither newspaper reported a cause of death. A staff member for the team, who wishes to remain anonymous, said Mr. Perron collapsed in the locker room after the game.

“Vaccines” are of course the leading cause of coincidences in 2021. But some are comparing Mr. Perron’s death to that of Loic Kayembe. The 24-year-old Gee Gee’s defensive lineman “died in his sleep” on September 24, 2017. A cause of death was ever released. The circumstances of the deaths are completely different. However, the outcomes are the same as we’ll likely never know the true cause of Mr. Perron’s death.

Mr. Perron loved football. He only posted to his Instagram account 18 times since 2013. Seventeen of them were about football, including video of his first sack in high school. His final Instagram post was on September 17, one day before he died. 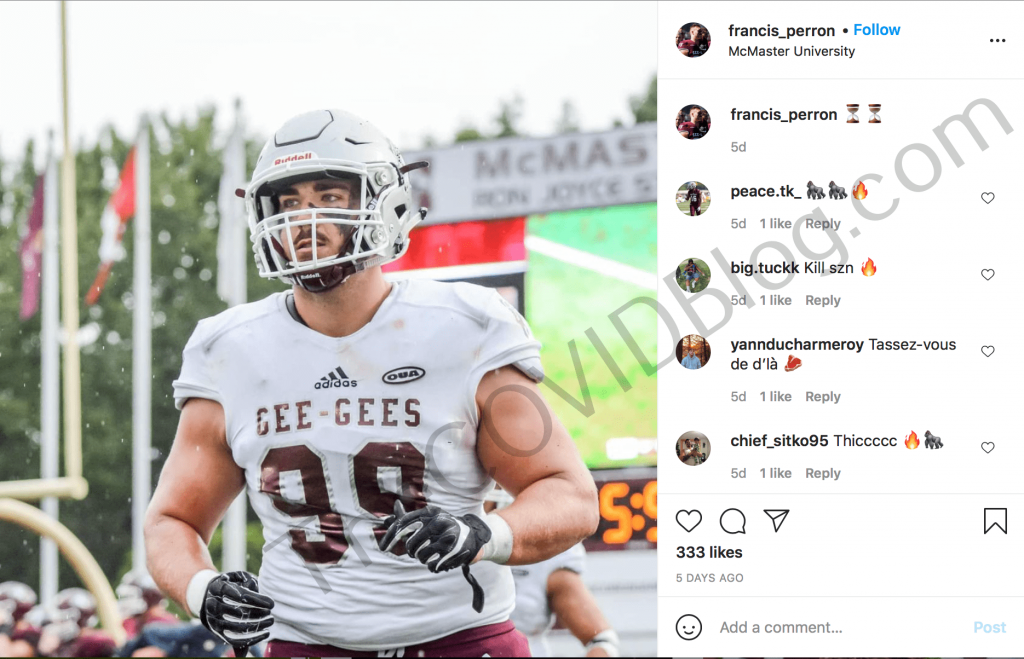 Mr. Perron majored in mechanical engineering and worked at Canadian Tire, according to his Facebook page.

This blogger has worked in journalism and content marketing for 25 years. It’s unprecedented how many people are “suddenly and mysteriously” collapsing and dying this year, particularly during and after physical activity. In fact some governments are warning people not to exercise after receiving mRNA or viral vector DNA injections. That means these incidents will continue and increase in frequency.

We’ve already seen NFL players retire or miss the 2021 season due to blood clots or heart issues. Volleyball players are missing games due to pericarditis and myocarditis. Teenage athletes are collapsing and dying on the field of play likely more than we know about. These mRNA and viral vector DNA injections destroy your blood and heart. There is simply no arguing against this fact anymore. It truly just a matter of time for anyone and everyone who received the injections.

The good doctor Sherri Tenpenny believes everyone who gets the actual mRNA or viral vector DNA injections (not placebos) will die “within 42 days to one year” due to Antibody Dependent Enhancement. The good doctor Judy Mikovits told Alex Jones on August 31 that the mRNA and viral vector DNA injections are “gene therapy and chemotherapy” that cause cancer in everyone who receives them.

Ivermectin is the cure for these injection-induced cancers, according to Dr. Mikovits and Chinese scientists.

Dr. Charles Hoffe, the good Canadian doctor, believes everyone who receives the injections will die within two years.

Do not receive the injections, under any circumstances. Stay vigilant and protect your friends and loved ones.

Rip God bless him and Give strength to his family.

Absolutely senseless death, unlike the good ND professor Karen Croake Heisler (that self-righteous windbag got what she deserved–sorry, sounds harsh, but I don’t care).

This young man sadly, did not do his research and had parents, professors and an education system that did not stress the importance of critical thinking. What saddens me is he was unnecessarily taken before he was able to experience life.

All these colleges (and all schools) need to be dismantled, the education system is corrupt beyond repair. All administrators, coaches, nurses, teachers, professors who push this agenda must be held accountable–TRUE choice was never given to these young, impressionable students. RIP Francis.

NEVER CONSENT to this jab, they are after our children–we are in the fight of our lives.

It’s difficult for intelligent people to comprehend, but most of their human brethren are low IQ. They function in society and contribute, but are unable of critical thinking. Compound that fundamental deficiency with the smoke and mirror manufactured by the MSM and Big Tech, and the reward being offered to them in the form of participating in society, and it’s quite easy to lead them to the abyss.

Society? What is society? The media directed mob?
Luckily I’ve never been one to participate much in society as I find most people vapid and shallow Frankly I’m just too selfish of my time to give it to those types. I’d rather pursue my own interests than be bored to tears by the time suckers.

He looked invincible in the photo. I wonder if an autopsy will be done it could shed light on why he collapsed. I hate the C19 jabs, so much suffering, if that was the reason. The University of Ottawa should have titled their notice “Public Death Mandate.” It sounds just like the ultimatum issued by LAUSD for its students. Pure tyranny.

It’s striking and pretty amazing to me that these men, big strong physical speciments of men, with extreme physical fitness and endurance, and tough attitudes, are such vaccine industry pushovers, and this includes the coaches who were once players the same.

Their immune responses are relentless and fast. Their own killer lymphocytes are killing them quickly. For those older, with slower responses, the end result will be the same, just slower.

It is also the case that healthier people will produce more S1 protein, than the unhealthy. It would make sense that their cellular machinery is in better shape than an old person.

It’s a deal with the devil: give me your future, and I’ll give you a comfortable, albeit it short, present.

musculature,physicality developed at the expense of contemplative abilities…

Yipes! Not that I want to divulge too much of my personal information, but this one hits close to home. I have some familiarity with UOttawa.

Actually, just recently, I was put in a similar situation: Rugby Quebec basically told us, “Get both doses by September first, or you can’t play.”

I haven’t attended practice (or played in a game) since August 31st. And for the same reason, I haven’t been to a gym since then.

It’s a bit of a disappointment to not be able to engage in some activities you enjoy, but I think we’re at a time where we have to stand on our values, regardless of the consequences.

Like many of you, I know where I stand.

The pressure for a lot of young people (who may not be truth-seekers, and who see the vaxx as the only choice for their future) must be immense.

I send my condolences to Mr. Francis Perron’s family and friends.

Hold the line. In a couple of years, you will inherit the earth.

My heart goes out to Francis and his family.

The loss of ife will be staggering, and [email protected] But in the end they have all made a choice to take the shots. It grieves me like knowing someone who committed suicide!

This is the result of FORCED democracy/Human rights in Canada.