The case will now go to the U.S. Supreme Court.

The complaint alleges that the vaccine mandate issued by disgraced former New York Governor Andrew Cuomo does not allow religious exemptions. This not only flies in the case of the Free Exercise Clause in the U.S. Constitution, but also Section 2165 of New York State Public Health Law. The Plaintiffs proceeded under pseudonyms (fake names) because:

The same “front line” health care workers hailed as heroes by the media for treating COVID patients before vaccines were available, including the Plaintiffs herein, are now vilified by the same media as pariahs who must be excluded from society until they are vaccinated against their will.

The complaint emphasizes that all of the COVID-19 “vaccines” were derived from and/or manufactured with aborted fetal cells. Pfizer and Moderna used fetal cells from a 1973 Netherlands abortion in the research and development stages for their mRNA injections. In fact, using aborted fetal cells is “common practice” in vaccine development, according to Nebraska Medicine.

The Johnson & Johnson viral vector DNA injections used fetal cells from two different abortions in the production stages. The Plaintiffs “reject as a matter of religious conviction any medical cooperation in abortion, no matter how remote,” according to the complaint.

“[The hospital] must follow NYS DOH requirements as they evolve. This means that [the hospital] can no longer consider any religious exemptions to the COVID vaccination even those previously approved. Employees who do not comply with the vaccination program by the deadlines above will be placed off duty for seven days without pay, and given those seven days to meet the program requirements. Employees who choose not to meet the program requirements after seven days will be deemed to have opted to resign.”

Judge Hurd granted the TRO yesterday morning. The state of New York is enjoined (ordered to stop) from enforcing vaccine mandates for those with sincerely-held religious reliefs. 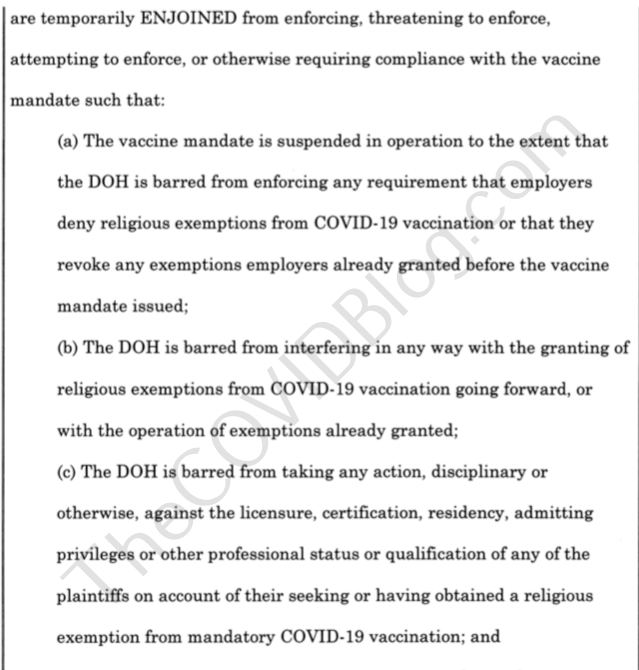 This is second time in two weeks that the First Amendment prevailed over unconstitutional, illegal, dystopian vaccine mandates. U.S. District Judge Paul Maloney granted a temporary restraining order halting Western Michigan University’s vaccine mandate for athletes on August 31. The WMU mandate was not only deemed a First Amendment violation, but also a Fourteenth Amendment violation because it is unequally enforced.

Governor Hochul and New York state officials must now answer the complaint. They could save everyone time and tax dollars, and admit the mandates are unconstitutional. TRO’s are only granted if the judge determines that the Plaintiffs have a good chance of prevailing on the merits in the case. But don’t expect sensibility from New York state. Hochul is essentially a female Andrew Cuomo. Here is a photo of Hochul and her goons “protecting your children.” 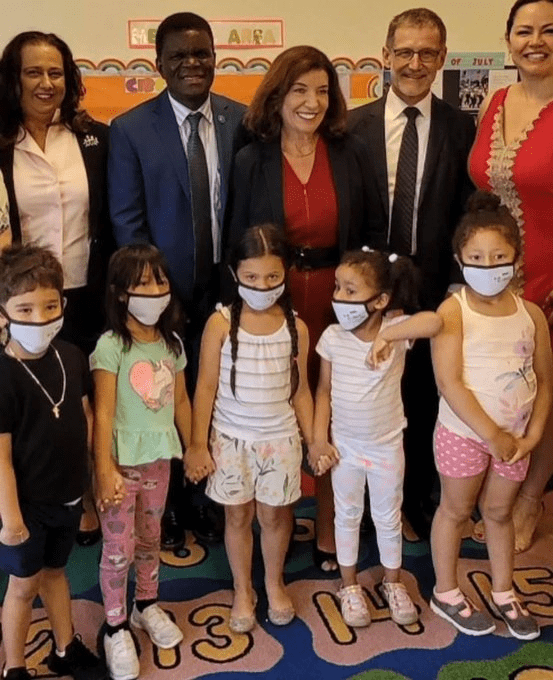 Both the WMU and New York TRO’s will remain in effect until the judges inevitably make the injunctions permanent.

This blogger’s mom was a minister in the Church of God in Christ (COGIC). She always said that people find Jesus in the most desperate of times – in prison, after cancer diagnoses, etc. A 2019 Pew Research Center survey found that 65% of Americans identify as Christians, down from 77% in 2009.

Right now, God is the only thing saving people from vaccine dystopia. Better find God sooner rather than later. He’s your best chance of avoiding lethal injections. Stay vigilant and protect your friends and loved ones.

COVID Legal USA is your partner in fight mandatory vaccines and other COVID mandates. We’re helping individuals write their religious exemptions now. Follow us on Telegram and Twitter. Read about white pine needles and order them here.

Vaccine mandates are unconstitutional, period. They violate our Fourth Amendment right to be secure in our persons.

gotta like that wording…”Employees who choose not to meet the program requirements after seven days will be deemed to have opted to resign.”
Which would then leave the employee without the option of collecting unemployment, or likely even suing for wrongful termination, because they “resigned”

I caught that too; it’s quite condescending, isn’t it? Very snooty and arrogant. The employee needs to show up and get thrown out—with a document on the spot saying they are FIRED. For some reason they prefer the word “terminated” but it’s not resigning, Mr. Employer—-it’s extortion!

Greedy and murderous hospital exectives should be expected to be condescending and arrogant.

the picture of the goons protecting the children, Why aren’t they in masks??? they certainly aren’t social distancing either.

Something about that photo with all the “adults” without masks while the children are cloaked just seems sinister.

The adults are terrified of catching something from the kids–because they are…DAT-DA-DUM: UNVACCINATED! I heard a story yesterday from a substitute teacher who walked into a room and “the kids were not wearing masks so I walked out, I left!” Mind you there were only seven kids in that special ed class but she was terrified. She’s 76. If you’re that scared, why are you working at all? NO WAY to avoid viruses in a classroom. Dumbness persists.

The teaching profession seems to have an inordinate number of mentally challenged members. Little wonder the education system has been failing for so long.

Only God is my Judge
Reply to  Kriss

I am following this site from Canada. There are vaccine mandates all over up here (with lots of protests and some court challenges.
From what I understand there are no basis for religious challenges; This I understand myself and from an evangelical blog I follow. Thanks for info on aborted fetus to make these vaccines.
I am opposed to vaccine mandates and vaccine passports we have in many provinces up here.

The people in Canaan before the Israelites had a custom of installing a dead baby in the wall of new homes.

Injecting dead baby into your body is no different.

COVID-19 and all CORONAVIRUS’? Since 2009 we have taken Swanson Vitamin’s NAC (N-Acetyl Cysteine) 600 mg. capsules. Less than $10.00 a bottle! We have not had any flu or virus at all. Also, no vaccinations! I was exposed to COVID-19 in January, 2021. No ill effects! This natural amino acid also helps the lungs, digestion,
and other body functions. Child;1/Daily Adult: 2/Daily
I post publicly on MeWe after being kicked off of Facebook and Twitter for sharing
about natural healing.
CHOOSE TO STAY WELL NATURALLY!