ST. AUGUSTINE, FLORIDA — A 40-year-old Florida woman got the surprise of a lifetime in January 2021. She gave birth to her first baby after not knowing she was pregnant for the first five months. Now she’s dealing with another twist that is robbing her of the joy of life.

Mrs. Tara Baldree Skalowska received her second Moderna mRNA injection on or around June 3, according to her Facebook page. The adverse effects were immediate. She reported severe joint pain, extreme fatigue and constant vomiting. It appears she only goes to her family doctor, and has not reported any hospital visits. But she’s been tested for cancer, lupus and “a slew of other autoimmune disorders.” Nothing has been found to be wrong with her. But Mrs. Skalowska’s condition continually worsened. 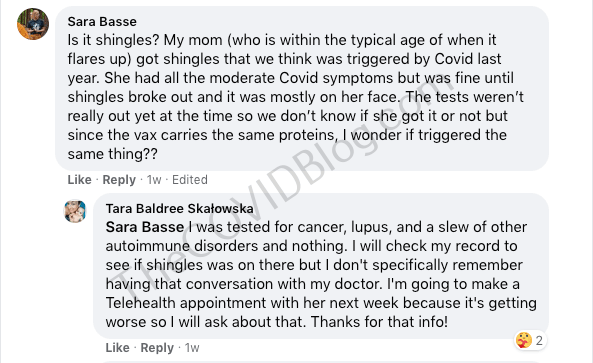 She posted a Facebook update on August 8. Mrs. Skalowska sarcastically vented about what the Moderna shot has done to her. It is the first time she posted a photo of the skin disorder on her head. 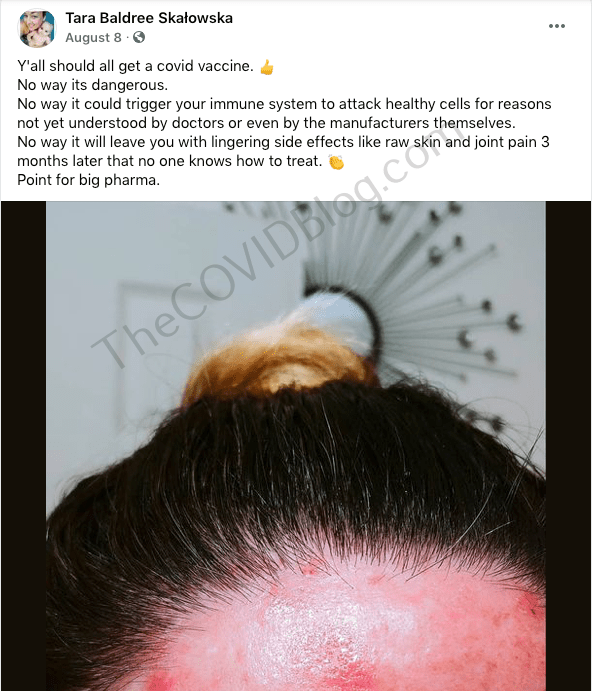 Considering some of the other post-injection skin disorders we’ve covered on this blog, the photo isn’t really that bad.

That is until she posted another update on September 3. Mrs. Skalowska captioned the new photo with “well, I won’t be needing a Halloween costume this year.” 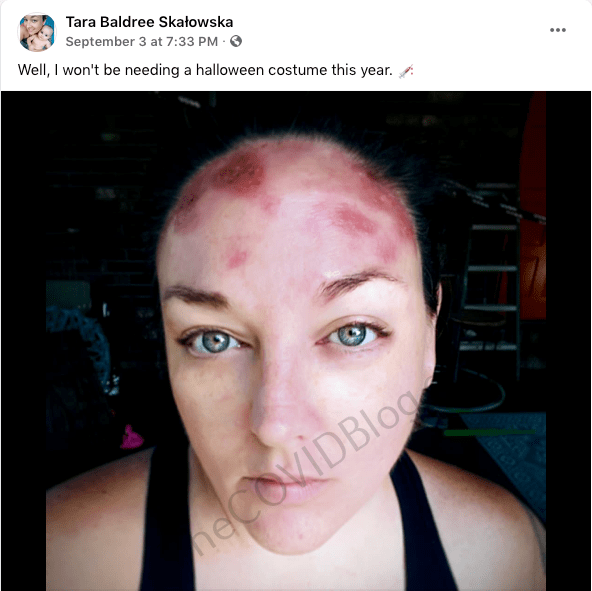 But Mrs. Skalowska, like everyone else who receives these injections, is learning a hard lesson. Her doctor said he “may” be able to treat the skin problem. But he refuses to give her medication because it might make her more susceptible to COVID-19.

It’s no longer debatable. Human skin is not only the largest organ in the body, but also one of the most cherished. The global skin care industry is expected to eclipse $185 billion annually by 2027. Americans spend about $40 billion per year on skin care. But there are no products, and never will be any products, that can reverse skin disorders caused by experimental gene therapy.

A study published in April in the Journal of the American Academy of Dermatology (AAD) chronicled 414 cases of skin reactions after the Pfizer and Moderna injections. The study found everything from severe hives, full body rashes and chilblains.

But the AAD completely downplayed and minimized all these reactions.

“We understand that some of these reactions may look scary, but when they appear more than four hours after receiving the COVID-19 vaccine, they are typically minor and in some cases, may indicate the body’s immune system is doing a good job of responding to the vaccine. I hope this information encourages more people to get their second dose of the COVID-19 vaccine even if they experienced a skin reaction after their first dose.”

Of course the AAD is a U.S. medical association. A quick search of its top corporate partners shows Pfizer, Johnson & Johnson, and a who’s who of other global pharmaceutical giants.

RELATED: CDC Foundation is not a government entity, has many conflicts of interest (March 23, 2021)

She was humbled and grateful when she learned, at age 40, she was going to bring a child into this world. 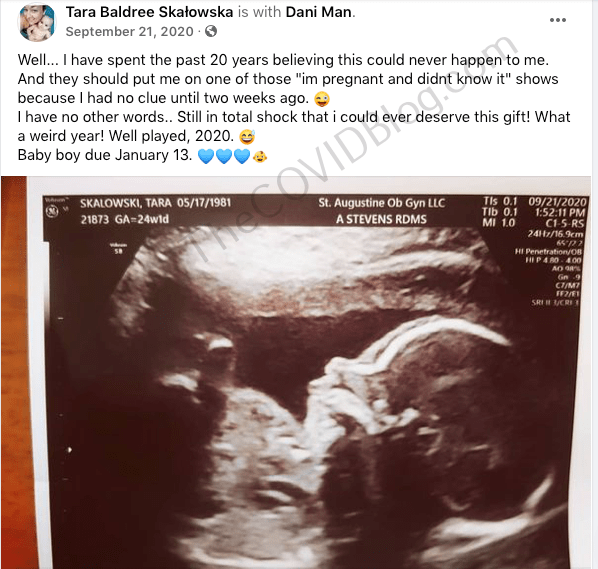 And now she regrets her decision to get the experimental mRNA injections. She even fears that her own baby will look at her like some freak once he’s old enough to understand what is happening to his mother. 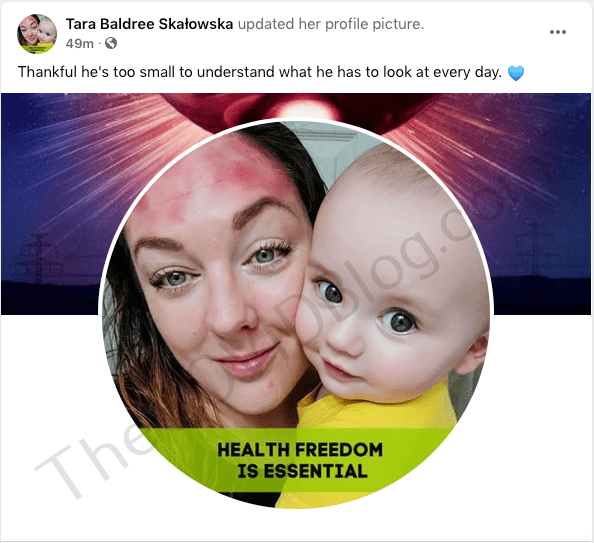 Mrs. Skalowska is also learning that talking about “vaccine” adverse effects brings out the worst in people. “Stop denying that this can and did happen to people you know,” she said.

“There’s nothing wrong with you”

This blogger long lost count of the number of Pfizer, Moderna, et al. victims who reported their adverse reactions to doctors, only to be told nothing is wrong with them. MRIs, CT scans, ultrasounds, etc. all “come back clean” in these victims.

That’s because the gene therapy is doing exactly what it is supposed to do. Technically there IS nothing wrong with these victims, despite gruesome skin reactions, paralysis, persistent pain, neurological issues, etc. They volunteered and/or were coerced into experimental gene therapy and these are the results.We’re all learning in real-time what these experimental injections do to humans.

The COVID Blog has nine months of data now. It appears the only way to reverse the effects of gene therapy is more gene therapy that reprograms your genetic code back to what it was before. Good luck finding a doctor or scientist able and willing to do that.

Keep spreading truth and sharing this blog. The war on information is won via your email lists and word of mouth. Stay vigilant and protect your friends and loved ones.

wow this is crazy, wait until next year when these type of stories show in a mass scale

And you can bet they will. Law Suits are gonna happen the world over for this.

I doubt they can sue due to the waivers they sign. Maybe those after 2023 can sue…

The pharmaceutical companies will not be responsible for any of this

Maybe not for lawsuits, but when the Tribunals start they certainly will be.
And they will potentially face the death penalty.

so sorry, but if these are her only bad reaction, she is lucky. i also have had numerous auo-immune skin problems (now i know better, they ‘re probably from vaccines as a child) But these injections of “trans-fection” really takes it up to the next level !

If that’s their idea of doing a good job then when a person’s fingers or legs have to be amputated that’s probably SPECTACULAR!

I like seeing a C19 jab victim with the appropriate indignation towards the immovable mountains of Big Pharma. Baby is cute.

We were seeing the toe pictures in the early stages of the first wave. It is a spike protein effect which will likely happen whether you have the disease or the vaxx. A vaccine based on the spike protein is negligent to the level of breathtaking (assuming its a misjudgement and not an intended outcome).

Oh Jesus—she needs to stay away from that beautiful baby. She is shedding/transmitting her Spike Proteins onto that innocent soul.

Yes, I was hoping she’s not breastfeeding him.