COEBURN, VIRGINIA — A Virginia mother and wife feels she’s lucky to be alive today. But her story is a reminder that telling truth about vaxx zealots’ holy sacrament activates their collective primal petulance, particularly as they hide behind social media profiles.

Mrs. Lindsey Reeves received her first Pfizer mRNA injection on Saturday, August 7, at 5 p.m., according to her Facebook page. She and her husband went out for a regular weekend night thereafter. They got home after midnight. Mrs. Reeves laid down, but knew something was very wrong.

She immediately felt hot flashes and her throat got extremely sore in a matter of minutes. Mrs. Reeves lost her ability to swallow and suffered tingling sensations in all of her limbs. They called 911, but Mrs. Reeves condition was rapidly deteriorating as she could barely breathe. Her husband put her in a car and drove 100 mph to the Norton Community Hospital emergency room.

RELATED: Kirsty Hext: 26-year-old British woman suffers 14 anaphylactic shocks in month since second Pfizer mRNA dose, encourages others to get the shots (May 29, 2021)

Doctors immediately diagnosed her with anaphylaxis, a severe allergic reaction. These reactions usually happen within minutes after exposure to the allergen. 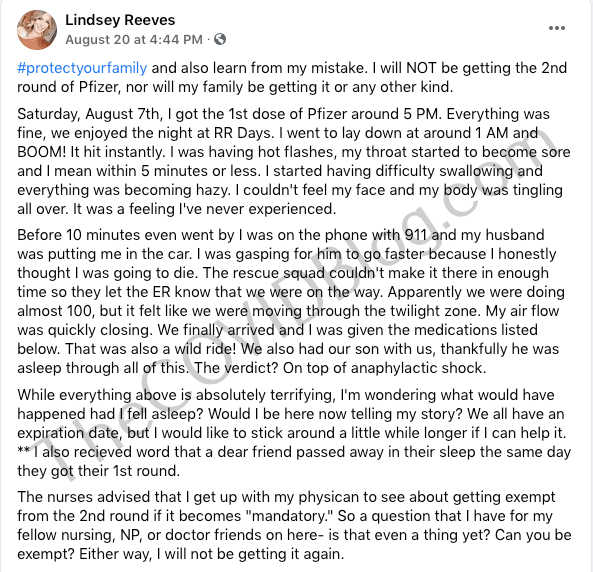 But they can also happen anywhere from four hours, six hours or even 24 hours after exposure. Anaphylaxis is fatal if the victim is not given immediately medical attention. doctors administered epinephrine, methylprednisolone and Benadryl. 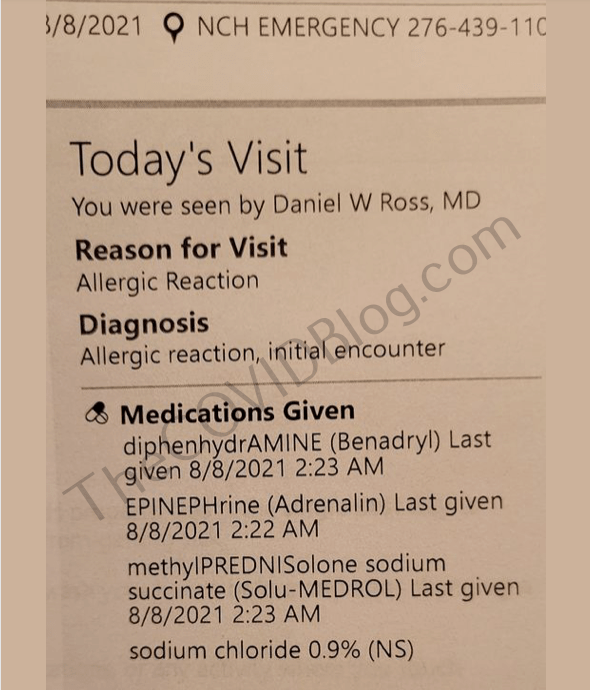 Mrs. Reeves survived, but wondered what would have happened had she fallen asleep that night before the reaction occurred. Nurses told her she should get an exemption for the second injection because of the anaphylactic reaction. But even the Centers For Disease Control (CDC) advises against the second injection if you suffer anaphylaxis from the first one.

Mrs. Reeves described the mRNA injections as “Russian Roulette.” She will not get the second shot. She also said that society must stop pushing the “get your vaccine so we can get back to normal” narrative.

We’ve seen it over and over again, as it is a common, global, cultural phenomenon in 2021. All Mrs. Reeves did was share her story and warn others about post-injection anaphylaxis and how lucky she was to survive the ordeal. But these mRNA and viral vector DNA injections are the holy sacrament to vaxx zealots.

It is de-facto blasphemy in the cult of COVID to share critical thoughts and experiences related to the experimental injections. It is equally blasphemous to share stories of healing from COVID-19 without using the holy sacraments (see Joe Rogan). Mrs. Reeves’ Facebook post went viral and the zealots pounced like flies on feces.

All of them hopped on their soapboxes and defended their holy injections, almost in a controlled, directed manner. Many of the comments sounded the same, with similar levels of vitriol and hatred.

A quick search of all of these people’s Facebook profiles show admiring portraits of Fauci, mask worshiping, encouragement of lockdowns, and wishing harm on those who do not wish to be injected with experimental mRNA and viral vector DNA.

Mrs. Reeves finally limited who could comment on the post. But not before addressing the vaxx zealots directly. 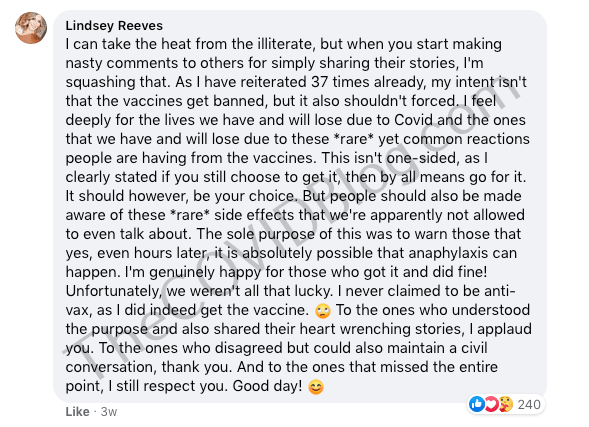 Mrs. Reeves survived the scare and does not appear to be suffering from any further adverse effects. In short, she was very fortunate and is intelligent enough to recognize the mistake and not exacerbate it further.

Dr. Janja Lalich is a researcher and author who has studied cults most of her life. She lists several factors that identify a cult. Those factors include, but are not limited to:

Blessing Point Ministries repeats many of these factors in its list of cult identifiers:

All of the foregoing perfectly describes the cult of COVID. We’re accustomed to small, localized cults like the Branch Davidians and FLDS Church. Some argue the whole LGBT thing is a cult because the lifestyle cannot be questioned, it’s primary tenets (e.g. “men are really women”) fly in the face of critical thinking and reality, and they are self-aggrandizing elitists. But the COVID cult is global. It is the largest, most powerful cult in human history. And we’re experiencing it in real-time.

The reality is what it is. How you handle it and go about life will ultimately determine your fate. Stay vigilant and protect your friends and loved ones.

It does seem to be strange how the “shakes” and other quick reactions/symptoms seem to hit women at a much higher percentage than men.
There are men dying of course, but when there are extreme adverse reactions not leading to death, they seem to be occurring to women much more, agreed? Or could it be that women are more likely to put them out there, whereas might men tend to suffer silently?

my pure non-scientific observation of these adverse events is: men seem to get myo/pericarditis, blood clots more while women seem to suffer more of auto-immune problem, neuropathy.

In my opinion, more scientific reason than anything Fauxci has ever produced, so thanks for that, Pam.

I think, in large part, men aren’t as apt to post or report.

I read a study showing more women partake in the vaccine (60% in all). Sorry, I’m too lazy to look it up.

Now her response is commendable. Feel free to do as u like but don’t push it on everyone.

There is something in the serum. This is abnormal. I’m wondering if the people that took the poke regret it and don’t want to be the only one. They want everyone in their pool so they can feel safe. Then their questioning of choice is aok b/c another person took the poke. I hope this makes sense. It’s like the body snatcher movies.

My sister and I call them the “Branch Covidians”. We heard it somewhere and it seems appropriate.

Insanity is rare in individuals but quite common in large groups.

I was reading a medpage group of medical professionals detail their reactions to Covid injections. Several stated that they had such a bad reaction to the first dose that other medical professionals told them not to get the second (much as this woman is addressing). But yet the vax mandate is one size fits all get all doses or not counted as injected. I think this is going to be the next shoe to drop especially with boosters around the corner…

There has been a huge uptick in pro-vaxx trolls working websites that report critical vaxx news. They are all of the same kind, mostly abusive and ridiculing, and most probably millennials because they seem to love communicating through meme-posting, and slogan repetition.

Yeah, it’s why I hate admitting to being a millennial, my generation overall (not every single person) is a disgrace, brainwashed, perverted, selfish and idiotic. A small percentage of us think for ourselves and dont follow the crowd, we would have been considered the “uncool” ones in school or college.

They are paid agents.

This is exactly why I got rid of Facebook in June.