GOOCHLAND, VIRGINIA — The Johnson & Johnson viral vector shot has been authorized for emergency use in the United States for a little over a month. We’ve reported three deaths shortly after the victims received the JNJ-78436735 shot. Now one of the most gruesome adverse reactions to all these experimental shots is also courtesy of the multinational pharmaceutical giant.

Mr. Richard Terrell received the one-dose Johnson & Johnson shot on March 6, according to WRIC-TV 8 reporter Talya Cunningham. Four days later, he developed an itchy rash, skin peeling off, and swelling all over his body. Mr. Terrell visited dermatologist, Dr. FNU Nutan, at Virginia Commonwealth University Medical Center as the condition worsened. His next stop was the emergency room on March 19. 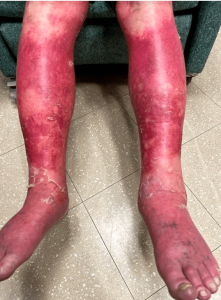 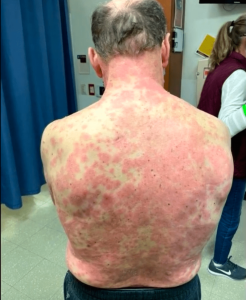 A biopsy determined that the condition was a reaction to the experimental Johnson & Johnson shot. Dr. Nutan said the condition could have been life-threatening if Mr. Terrell didn’t seek medical attention. Despite the gruesome reaction, Mr. Terrell is encouraging other people to get the shots.

Watch the full report from WRIC-TV 8 News below.

All risk, no reward

There is no rhyme or reason for anyone to get these experimental shots. There are simply no benefits, but plenty of risks. At least 38 people in Florida tested positive for COVID-19 several weeks after their second Pfizer or Moderna mRNA shots. The risk is pointless.

Health “authorities” continually move the goal posts. Pfizer and Moderna are now saying a third dose is necessary for their shots to work. Meanwhile everyone from pharmaceutical executives to Anthony Fauci admit that these shots do not stop the spread of COVID-19. It is not about public health. It is about getting you injected with experimental, artificial genetic material. Stay vigilant and keep spreading truth.

After what this guy has been through, he is still encouraging others to get it. Mind boggling, but I find this is a common response, cognitive dissonance? Or is it actually causing brain damage?

I can’t believe he’s still PRO-VAX either! The father of the 39 y.o. utah nurse who died after her jab ALSO encourages other to get the jab!! What is WRONG with these people!??

If you don’t believe me, research project Bluebeam, Mk-Ultra, and the documentary “Out of the shadows, into the light” produced by the Hollywood Stunt man…

Behold a Pale Horse by William Cooper is also enlightening. I just take his alien stories w/a grain of salt, knowing real demons and fallen angels are more likely the culprits.
It’s a portal they’re accessing, and CERN is part of it. And the Holy KJV Bible sums up the rest.

it’s predicted by Gates 700,000 could die from the vaccine, and the ones who don’t die right away are unable to accept that may have made a big mistake. it’s called denial.we are nothing but pin cushions to these get rich quick schemers and serial killers.