ADELAIDE, SOUTH AUSTRALIA — A 74-year-old man is dead after Australia doctors literally watched him suffer and die without intervening.

Mr. William Clive Haddon received the experimental AstraZeneca viral vector shot on or around May 1, according to ABC (Australian Broadcasting Corporation). His daughter, Michelle Haddon, aka Lexi Logan on Facebook, tells the story from there – a story that sounds like a real-life dystopian novel.

Mr. Haddon experienced severe abdominal pain and had blood clots in his urine on May 13. An ambulance took him to Modbury Hospital. But doctors dismissed his condition as a simple urinary tract infection, gave him antibiotics and sent him home. Mr. Haddon continued bleeding and suffering for the next 24 hours. He went back to Modbury Saturday morning, May 15. This time they removed blood clots from his urinary tract, meaning it was blocked completely and he was enduring excruciating pain. Doctors refused to give him pain medication.

He was transferred (“handballed [off]” as Michelle described it) to Lyell McEwin Hospital later that evening. A nurse gave him what amounts to Tylenol when he was suffering excruciating pain and obviously needed something stronger. No tests were performed to determine the cause of the bleeding. When Mr. Haddon asked when tests would be done, the nurse, according to Michelle, said “don’t cause any trouble” and that he’d be tested “maybe tomorrow, maybe Monday, who knows, it’s the weekend.”

Michelle told the nurse that her father received the AstraZeneca shot a few weeks prior. The nurse shrugged it off and said she had the shot too and nothing was wrong with her.

The hospital ordered Michelle and Mr. Haddon’s wife to leave because visiting hours were over. Mr. Haddon suffered a stroke at Lyell McEwin thereafter, but received no treatment until hours later. He continued bleeding profusely and enduring excruciating pain. 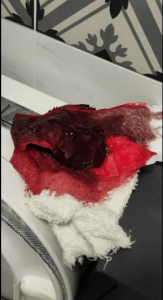 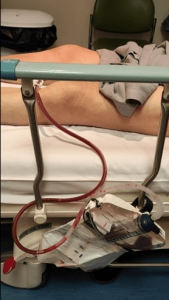 Mr. Haddon was transferred yet again to Royal Adelaide Hospital. Doctors discovered more blood clots in his brain and performed emergency surgery that uncovered brain damage from the stroke. But the surgery failed to clear the blood clots and improve his condition. Michelle again told the nurses that her father received the AstraZeneca shot. They, again, shrugged it off as nothing.

Mr. Haddon was moved to the intensive care unit on Monday, May 17. Michelle spoke to the ICU doctor, and he had no idea what was going on with her father. Modbury Hospital sent no information to Royal Adelaide and the entire communication chain with all of the hospitals was a complete failure, deliberately or otherwise. Mr. Haddon was placed on a ventilator that afternoon. He passed away last Thursday or Friday.

Watch a report from 9News in New South Wales. Pay attention to when Michelle tells the nurse her dad had the AstraZeneca shot; and the nurse shrugs it off.

This is perhaps the most horrifying story we’ve covered on this blog, and that’s saying something. But it should not come as a surprise as Australia is fast-becoming the epicenter for blatant genocide related to these experimental shots.

We just wrote about 18-year-old Ellie Peacock last week. The Queensland woman literally had to beg medical personnel to test her for blood clots after her AstraZeneca shot. Fortunately she survived what is apparently, to put it mildly, substandard government healthcare in Aussieland.

Further, it is literally illegal for Queensland doctors to prescribe hydroxychloroquine for COVID-19, despite 219 peer-reviewed studies showing its effectiveness as both a treatment and prophylaxis. Doctors can be sentenced to six months in jail for prescribing the drug. There’s also Professor John Hayball, who Sky News called a “leading South Australian immunologist.” He told Australians to take the shots and “don’t ask any questions really, please take it.”

Things are going to get worse here and abroad. Virtually all U.S. colleges and universities are mandating experimental mRNA and viral vector shots for all students in the Fall 2021 semester. It’d be great to see mass protests and huge drops in enrollment as a result. But unfortunately a whole lot of young Americans, Aussies and everyone else are completely indoctrinated and lack the ability to think for themselves. All you can do is stay vigilant and protect your friends and loved ones.

There really is almost nowhere to go and nowhere to hide…the guy who called this a “prison planet” was spot on with the evaluation.

Earth is a hideous series of interlocking rackets…medical, legal, political, agribusiness, finance, and several others; the ruthlessness and cunning of the racketeers makes the mafia look like a bunch of subway pickpockets.

Are you talking about the Synagogue of Satan Jew World Order?

Poor man. He took it May 1st, approx. Again, with all the bad news on the side effects, rare isn’t so rare if it happens to you. Did he want to travel? Be free for a sporting event? I hear all kinds of reasons from friends that have been injected. None of them is worth putting poison in my body. Horrible product, horrible results. Horrible health “care” doesn’t help either.

Greg Hunt, when your Government offers Ivermectin or Hydroxy Chloroquine as an alternative to covid you may get more cooperation from us the people? In the meantime you had better wake Morrison up to this fact that one or more of his loyal (Liberal)? Soldiers has put you all on notice for us who don’t trust the Jab or this governmen!t

Notice the propagandist at the end says the vaccine has been ‘cleared’ of involvement in this case- funny but doubting there is a link doesn’t sound like certainty to me. Of course it killed him.

Google is bad Startpage is good. Chrome is bad Brave is good.

Oh my god, that poor man. As a nurse myself, it makes my blood BOIL anytime I hear about patients being denied pain medication. I’ve been on that side of the fence and it is not fun. But that was really the least of the malpractice issues in his case! I hope his family sues the crap out of those hospitals and doctors! Australia really IS the worst of the worst, and it started with vaccine mandates even before COVID. You can bet if I lived there, I’d be finding somewhere else to move!

There’s nowhere I can see where one can escape this madness. Only into the wilderness. There they will follow. To eradicate any who resist I fear.

210 people in Australia have been murdered with the covid vaccines, the government and the media refuse to report it and actually censor any one that does state it on social media ven tho it is from the Govts own reporting…The Govts own TGA website says it but they keep it hushed from the public.

My sympathies to the Haddon family. What is happening to our Australian medico’s and nurses.
When I worked as a Registered Nurse it was drummed into us to advocate for our patients. Obtaining Medication for relief of pain being an essential part of a nurses role.

I have been looking at the TGA website but cannot find any reference to Adverse Events or Deaths following the Covid jab. Could someone help me with the exact website tab. It would helpful to have this list printed out when asked why I will not have this jab. I could not believe our own government refused to allow safe and effective medications that would save lives, ie Hydroxychloroquin and Ivermectin. But sadly that is the case. Our Bondi Surf Life Savers do a better job that our own Government in saving lives.

Rev, Thanks for the link.

A bunch of those Bondi lifeguards have just been sacked (by their employer, Waverley Council) for refusing the death jab.

The Plandemic has involved nothing but lying at every turn, in every detail, so those figures mean nothing but coverup of the real numbers of deaths from the mRNA spike poison.

I’ve seen 4647 deaths as of 5/17/21. welcometheeagle88 on Bitchute has shown how numbers are manipulated, deaths removed, etc. VAERS only has 1% of reports anyway.

A P
Reply to  rev

what is the REASON for them to make us take this JAB, not tell us about all the death’s from it..I don’t understand what they r trying to accomplish by making as many people as they can, take this unapproved killer vax…what the hell is up?? does anybody know the WHY of this massive push for VAX and the massive cover up’s of the REAL adverse affect’s death toll’s??? what r they hiding???

Tammy, I have listened to many, many things over the past year. This 48 minute interview is very succinct in explaining. I hope you are able to find time to listen.

Every individual involved in promoting these poisons is aiding and abetting mass murder. Period!