KAJANG, SELANGOR — A 27-year-old competitive archer was training for a chance to represent Malaysia in the 2021 Tokyo Summer Olympics. He is now dead and Malaysian officials are calling it a coincidence. 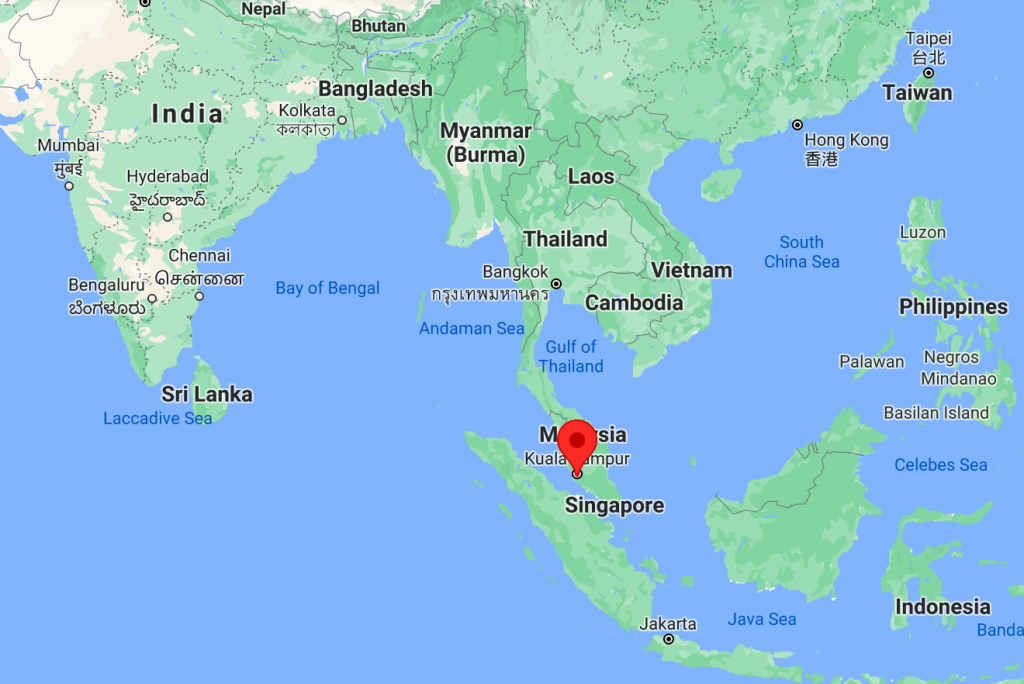 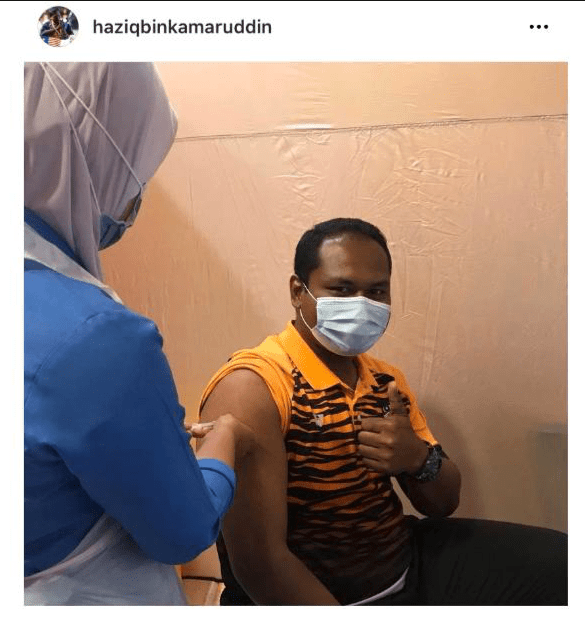 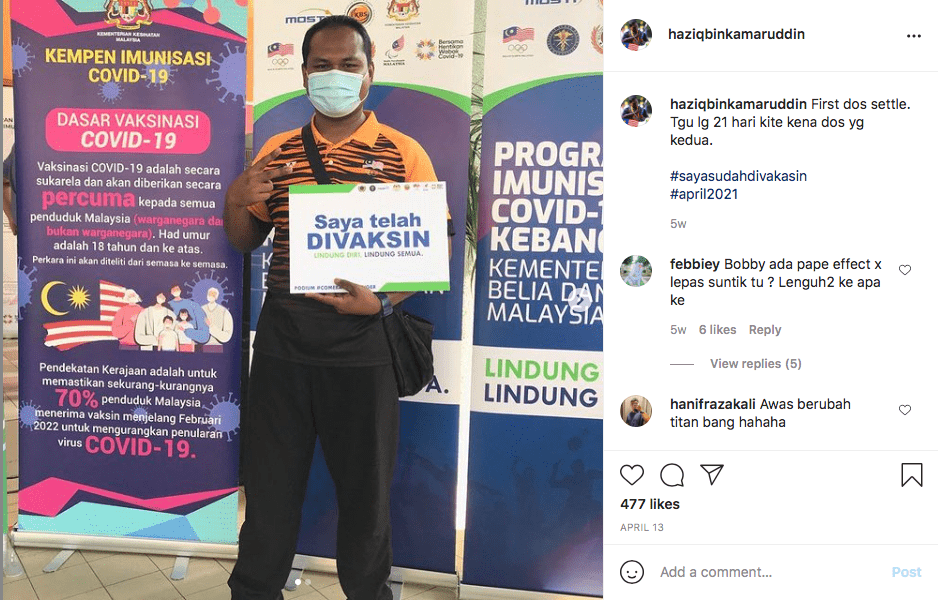 The sign translates roughly to “I’ve been vaccinated.” All Malaysian athletes who wished to compete internationally were forced to take the shots on these same dates.

Mr. Kamaruddin apparently suffered no immediate side effects. Hari Raya Aidilfitri (Eid al-Fitr) commenced on May 12. It is a two-day Muslim religious holiday marking the end of Ramadan. A family member told the Malay Mail that Mr. Kamaruddin performed Fajr (Subuh), the first Muslim prayer of the day, on Friday morning, May 14 after Hari Raya Aidilfitri ended. He went to the bathroom after the prayer, came out, and suddenly collapsed. Mr. Kamaruddin died less than two hours later at his home.

An autopsy found blood clots in his heart. Minister of Youth and Sports Reezal Merican Naina Merican immediately downplayed the role of the experimental Pfizer shots. He said that 242 other athletes all took the shots at the same time, insinuating that none of them suffered any adverse effects. His statement to Free Malaysia Today sounded like something written by Pfizer public relations, the World Health Organization, or the Centers for Disease Control:

I know some people have linked Haziq’s death to the Covid-19 vaccination. This is an irresponsible act. I urge everyone not to spread news that is not true.”

He was preparing for the 2021 Tokyo Olympic qualifiers in Paris from June 19 to 21. Further tests are being performed to conjure an “official” cause of death.

If we didn’t know any better, this talented, promising young man could easily be mistaken for an American based on his social media posts. It just goes to show how well-coordinated the psychological conditioning is worldwide. Further, Malaysia is one of many countries where “vaccine rollouts” positively correlate with rising COVID-19 cases. Malaysia started injecting people with Pfizer experimental mRNA in early March. Thus the second shots started around March 22. The numbers, in this case, don’t lie. 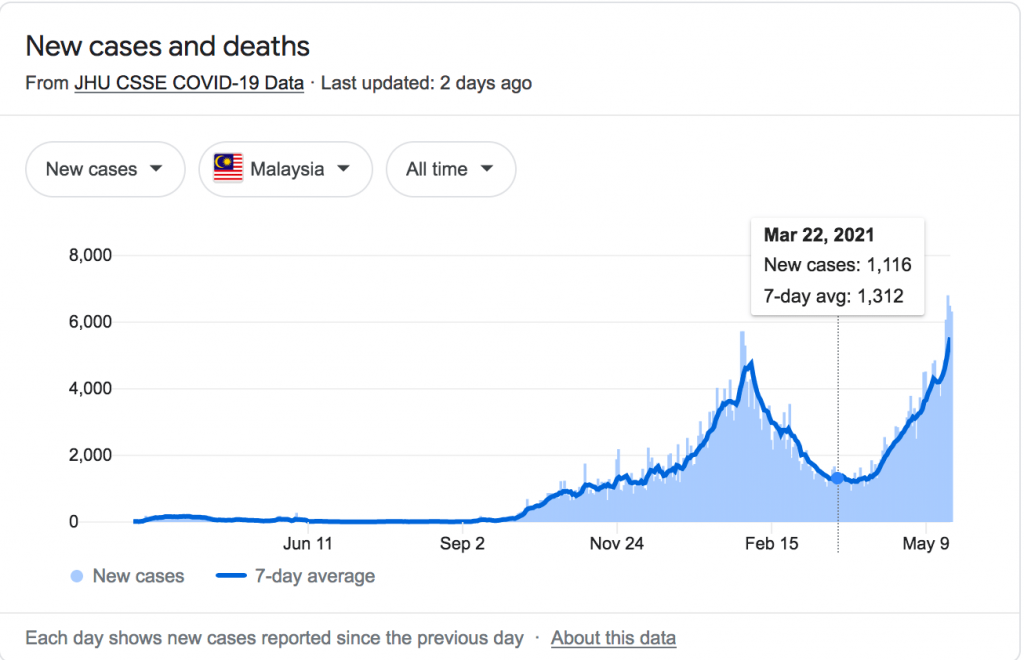 Everyone has a choice. Jamaican Olympic sprinter Yohan Blake said that he would rather miss the Olympics than get the shots. It’s sad that virtually all of humanity is forced to make this decision, whether it’s for your job, education, social standing, and/or ability to travel abroad. The decision is simple for critical thinkers. Stay vigilant and protect your friends and family.

COVID Legal USA is extremely busy helping Americans fight back against mandatory vaccines for employment and other COVID mandates. Contact us today and a legal writer will get back to you within 24 hours.

Everyone has a choice. Jamaican Olympic sprinter Yohan Blake said that he would rather miss the Olympics than get the shots.

No one is FORCED to do anything…

They CHOOSE to do it.

The most accursed word in the English language is *BECAUSE*.

“Because” is the source of your universal enslavement.

When the Christ had not eaten in 40 days while in the wilderness; he was offered food in exchange for throwing away everything he stood for an believed in.

He did not say, “BECAUSE I am hungry, I will fore-sake all My Principles”.

Instead He stuck to His guns and said to hell with “because”; I will find another way to hang in there and endure till the end.

It’s a choice until you lose your livelihood, home, and can’t buy food. Stalin starved 25 million people to death.

No tyranny exists without the consent of the tyrannized.

The tyrant is always a walking embodiment of his people; a refracted image of themselves.

Every nation gets the government it deserves.

Because the number of a***oles and cowards in America has now reached critical mass; the country is a dystopian Hell.

You can pass a million laws to change things; but they will profit you not in the slightest.

Only by radically altering the character and the mindset of the population from the collective insanity (in so many areas) that presently prevails can this nation ever hope to be made “great”.

Remember this nation’s unofficial motto is “greed is good” and it worships financial gain and self-aggrandizement above all other things.

Even Reagan said that the best thing about America was that “it was a place where anyone could get rich”.

When greed and worshipping the dollar are a nation’s bedrock values; one need not be a rocket scientist to understand that the culture and mores and values of the country will eventually devolve into baseness and vulgarity and just general ugliness.

Just look out your window!

I distinguish between getting rich, and greed — they are different from each other.
I loved listening to Rush Limbaugh until he started rationalizing a form of avarice, love of money, chortling “Greed is good.” It was sad to hear it coming from a self-avowed Christian such as Rush, and to see it gleefully picked-up upon by self-justifying ruthless avaricious capitalists (as opposed to capitalists who prioritize according to harmony and comfort rather than growth) who identified as “conservative,” now given permission to sneer at avaricious “liberals” and Democrats as if they weren’t the same wearing a different logo. Avarice results in strife and destruction every time.

So does ignoring wholesale “do unto others as you would have them do unto you.” THAT latter is what is happening right now with coerced/forced injections, masks, and social distancing. The consequences of breaking that critical Commandment are certain to be very negative, the Bible makes it plain.

Not to get into a theological or philosophical debate; but I do want to make this one quick point; and hopefully this will resolve things.

It was not as if the Christ did not understand the notion of objective living…food; shelter; and heat to stay warm in the winter.

He was not against anyone having the necessities of life because without them the people would obviously drop dead.

What he did oppose was making material gain the center of one’s reason for existence; “you can not worship two masters; God and Money”.

“Thou shalt not take the Lord thy God’s name IN VAIN”…the word vain is derived from vanity; and the very explicit implication that the Christian religion should not be used as a money making device by ANYONE.

So I can say categorically that all these mega churches and prosperity gospels and probably 99% of the “Christian” church is in for quite a surprise on their respective check out dates.

So very nicely stated! I wish I could give it more than one upvote. Thank you for the above post.

I call this mindless pursuit of growth “a bacterial mindset”. Humans are the only species capable of measuring our effect on our environment, and then restraining ourselves in order to protect our food sources. Yet “civilization”, which is basically just unrestricted growth without long-term planning, is not an advanced way of thinking but an extremely primative one, not much different from bacteria. We are going to need to evolve past this bacterial mindset if we want to survive as a species.

I agree that people get the leaders they deserve. China is a great example. Xi Jinping is really just a microcosm of all the worst parts of Chinese culture, which has been practicing “greed is good” like a religion for thousands of years now. And the adversarial way parents treat their children isn’t much different than the way the state treats its citizens.

I know some people have linked Haziq’s death to the Covid-19 vaccination. This is an irresponsible act. I urge everyone not to spread news that is not true.”
___ Minister of Youth and Sports Reezal Merican Naina Merican

I could get better medical advice from drunks in the gutter…

Taiwan started its mass vax back in March 22nd this year. Its covid chart shoots through the roof in recent days. Is there a connection between these events?

Some of those “I’ve been vaccinated” signs should read, “I’ve been blackmailed.” RIP.

“I’m a vaxtard!”, would be a more appropriate sign. Especially on the grave site.

A friend of mine told me that my husband would be required to get the covid vax in order to get his visa to come to the USA with me. Not a chance. Usually they like to blackmail by saying something is “required” in order to get you to proactively do it, thus waiving your rights. My family is worth more than that…but sadly many people feel “forced” into it in some way. It’s a nightmare…

Hope his family sues the people that made it mandatory! You can’t make a drug (biologic) mandatory!

I live in a country just south of Malaysia. Many Malaysians are stuck here because of the ridiculous measures to cross the border, including PCR tests means many have given up going back to their families for the weekend to keep their jobs. Sad for this sports champion.

It takes a lot to realize the world we once knew is no more.

I want to thank The COVID Blog for featuring cases around the world, unlike most that tend to focus on the western hemisphere when based in the US. It makes these stories hit home.

This eugenics injection is a global war against the human race in complete violation of the Nuremberg Laws against illegal medical experiments starting with lack of informed consent and use of coercion and false promises of ‘wanting to travel again’ to murder people.