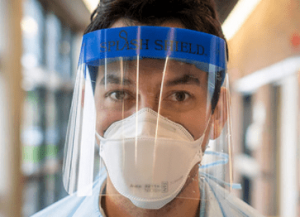 There’s a fine line between censorship and suppression. Google flat-out censors The COVID Blog. Google autocomplete works by “look[ing] at the real searches that happen on Google and show common and trending ones relevant to the characters that are entered and also related to your location and previous searches.” Start typing The COVID Blog in Google. Here are the results. 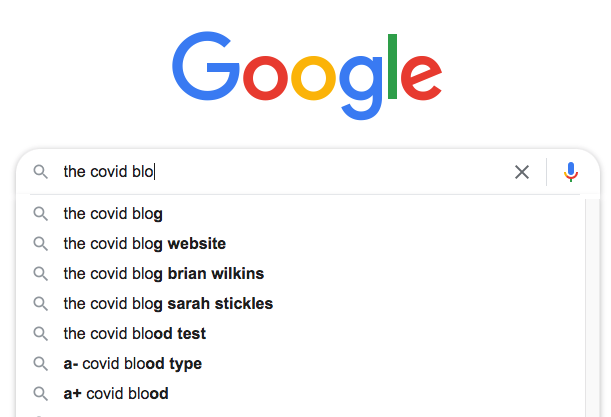 Click any of the first three and nothing comes up on Google’s first page results. The basic rule of thumb is to use any other search engine (DuckDuckGo, Yahoo!, eTools.ch, FindX, etc.) if you seek real news about COVID-19 and the experimental shots.

That being said, we’ll publish stories like this every month to summarize COVID-related happenings around the globe. Many of these stories are suppressed, downplayed or framed in some very strange, dystopian way by mainstream media. These six news briefs will make you laugh, cry and everything in between.

Convalescent blood plasma comes from people who have had a certain disease, in this case COVID-19. The idea is to transfer this plasma containing COVID-19 antibodies to someone who hasn’t had the disease, giving them immunity. Mainstream media ran several stories last week saying the Red Cross accepts blood donations from vaxxed people. That is true. Though nobody should want that blood. The problem is that mainstream media are trying to deflect from a very important detail.

The Red Cross does not accept convalescent plasma from anyone who has received any of the experimental COVID-19 “vaccines.” The reason for this policy is obvious to critical thinkers, but probably shocking to vaxx fanatics. Red Cross official Joe Zydlo told KMOV 4 in St. Louis back in February that the so-called vaccines deplete natural antibodies from people who have recovered from COVID-19. Thus, their plasma is useless in potentially treating hospitalized COVID-19 patients.

UPDATE June 22, 2021 – Youtube removed the KMOV video. Unfortunately we failed to download it. However, NBC 12 News (KBMT) in Beaumont, Texas also reported about convalescent plasma on December 14, 2020. We uploaded this one to a legitimate space.

We covered last week how New York City is offering free Shake Shack burgers and fries as incentive for people to get experimental shots. Ohio Governor Mike DeWine announced a lottery in his state. Five experimental shot recipients will win $1 million each. Their lottery ticket is their vaccination card. He inadvertently or otherwise started a dystopian trend.

Maryland Governor Larry Hogan announced his lottery plans around the same time. The state is holding #VaxCash drawings (yes, that’s a real hashtag) starting today. One vaccinated person will win $40,000 each day through July 3. One person will win the grand prize of $400,000 on July 4 in the program’s final drawing. All of said programs are meant to encourage people to receive the experimental injections.

You read that correctly. Governor Gavin Newsom spent $10 million for 2,000 workers that “make peer-to-peer appeals and provide support to help overcome barriers to vaccinations.” The program is administered by Healthy Future California, UCLA and 70 other local community organizations. The goal is helping people overcome barriers and hesitancy about the experimental shots.

As of May 19, the Sacramento Bee reported that canvassers knocked on 231,000 doors, made over one million phone calls and secured 13,000 vaccine appointments as a result. Organizers said, for the most part, people are happy to see them at their doors.

We’re starting to lose count. The aforementioned Newsom violated his own rule to stay away from family and friends when he attended a party with 12 people on November 6, 2020. House Speaker Nancy Pelosi violated both her own mask rules and San Francisco indoor business rules on Monday, August 30. She went to a hair salon, maskless, when indoor business operations were prohibited. She of course played the victim role and said she was “set up.” Senator Dianne Feinstein, Austin (TX) Mayor Steve Adler, Chicago Mayor Lori Lightfoot, and now Gretchen Whitmer.

The Michigan governor not only traveled to Florida after telling others in the state to avoid travel, but also violated her own social distancing rules at a bar last week. Whitmer said she “is human”and simply made a mistake. Meanwhile numerous Michigan businesses have been fined thousands of dollars for breaking these rules.

This is becoming a trend due to the very real possibility of the non-vaxxed being exposed to experimental mRNA from direct and indirect contact with vaccinated people. Yazmina Jade Adler owns Khemia HI Vibe Frequency hair and healing salon in Queensland. She posted on Instagram last week that the salon no longer serves experimental vaccine recipients. She cited insurance issues, unknown health effects, and the fact that clinical trials are ongoing through 2023. 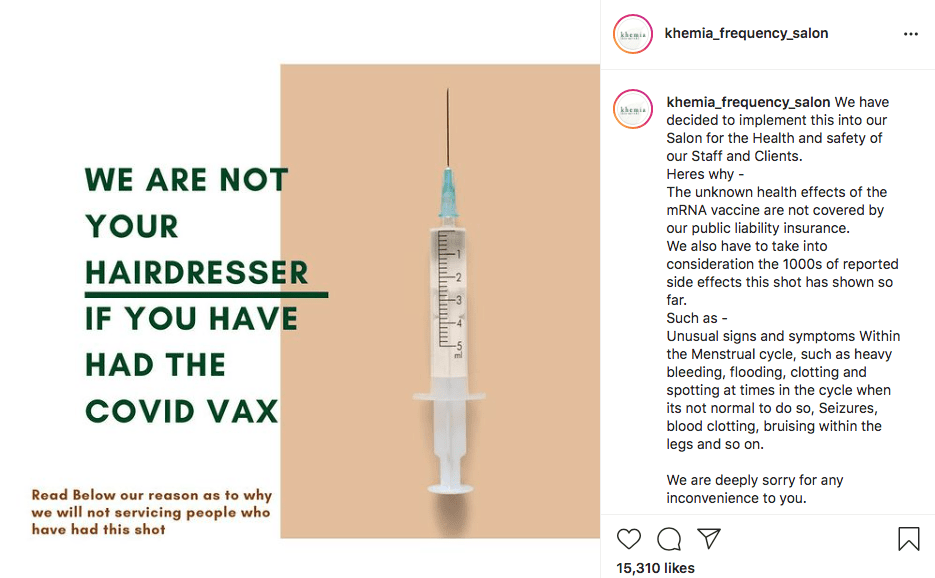 Virtually all of the comments are supportive. Governments across the globe are walking a tightrope. They’ve normalized discrimination against unmasked and non-vaxxed people. The door swings both ways.

This certainly doesn’t make sense based on Fauci, CDC, et al. narratives. COVID-19 “vaccines” are supposed to stop the spread of COVID-19, or at least that’s what big pharma and mainstream media have much of the global population believing.

We wrote about India last week. The country started using proven drugs like Ivermectin and hydroxychloroquine to treat COVID-19. Cases are now plummeting. Said drugs even seem to kill all the scary, ominous “variants” that are obviously born from the experimental shots. Nobel Prize-winning virologist Luc Montagnier confirmed the obvious positive correlation between so-called variants and vaccination volume.

Most countries started mass-inoculating people in February or March. Thailand has vaccinated about three million people as of today. 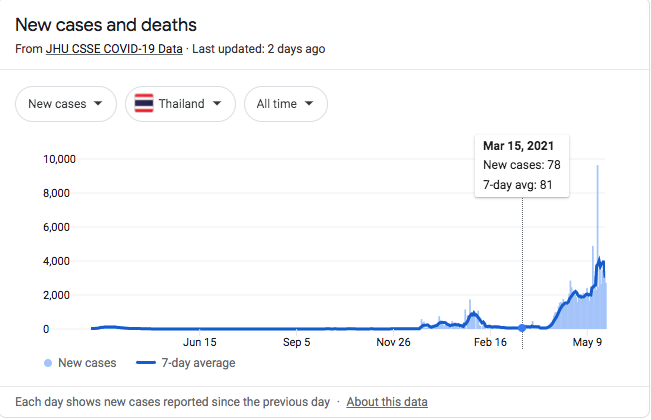 Bahrain has vaccinated half of its population, according to Reuters. 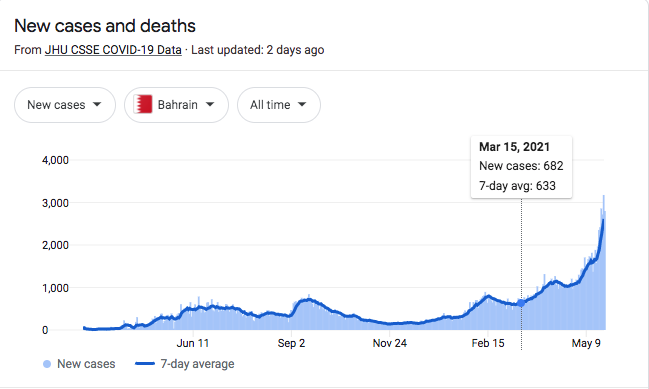 Argentina has administered over 11 million doses of experimental shots. 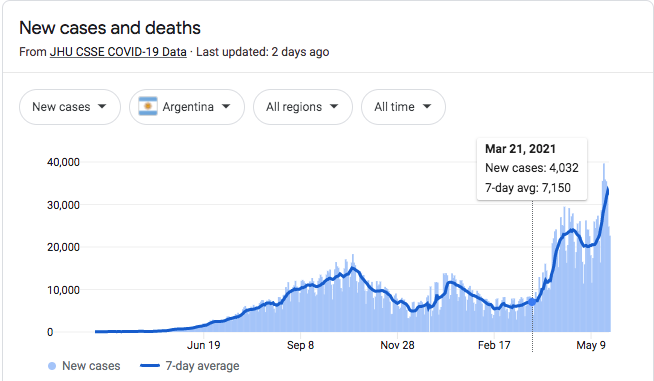 Thank you for this round-up of pertinent recent news on this topic. It is becoming more bizarre by the day, more proof that fiction is a mere amateur when it comes to truth. One doesn’t need to be much of a student of history to know that men (almost always Godless men; atheists and atheism have killed more than any religion) wielding fear as a whip are capable of great evil under the auspices of benevolence. It is simply, human history. There are many of us who can now see more clearly what is headed our way. I think of Bette Davis’ classic line: “Fasten your seat belts. It’s going to be a bumpy night.”

Belief in government is a religion by itself, its the religion of slavery. This is how lockdowns were even possible because enough people believe (belief = religion) they need an authority figure to tell them what to do.

I’m in Thailand and noticed the huge uptick in cases right after the vaccine was rolled out properly. They keep pushing it (Sinovac) five times an hour on radio and television. A lot of Thais are worried about side effects and not in a big hurry to get it…me either! Almost every country that has a mass vaccine rollout experiences a surge in cases right after…

Vaccine deaths are starting here. This morning i saw presumably government workers offering people 10kg bags of rice to get registered for the vaccine. Madness

Google has become useless as a productive search engine. If it brings up anything new at all—even subjects it “approves” of, they are repeated over and over and no amount of page turning yields anything different. Same dumb websites, same basic, limited info. It’s a search engine for 5-yr-olds. Google has censored themselves into obsolescence.