Mr. William “Bill” Scott announced on January 11 that he would receive the experimental Pfizer mRNA shot later that week at the Syracuse Exposition Center.  He posted his COVID-19 Vaccination Record Card on January 17. A bizarre lot of comments follow the post. Mr. Scott received the second dose on February 7. 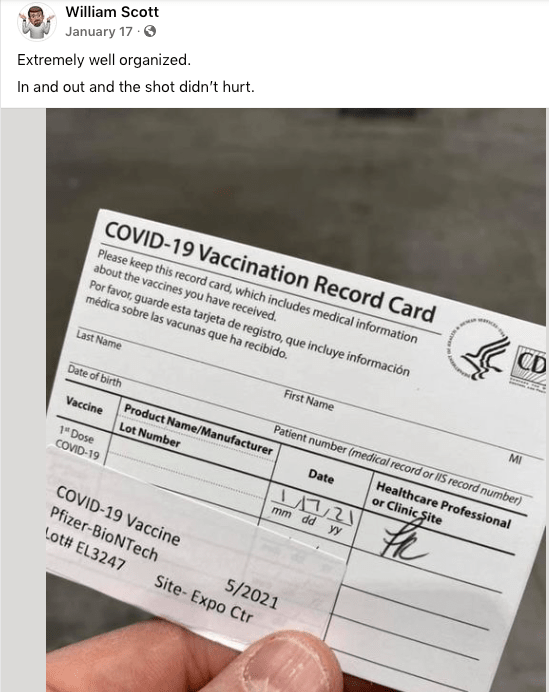 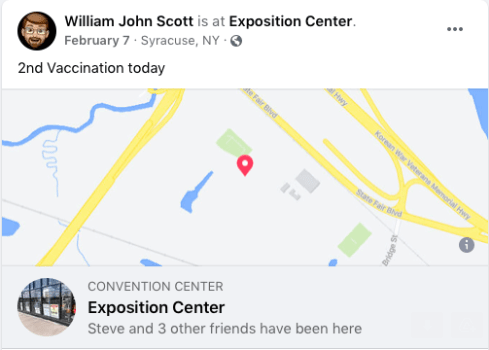 Mr. Scott, 53, like a lot of experimental mRNA and viral vector recipients, apparently suffered no immediate side effects. But it seems everyone who receives these shots become walking, talking advertisements for pharmaceutical companies and the COVID agenda as a whole.

Mr. Scott posted about his opposition to schools changing social distancing guidelines from six feet to three feet on February 25. He also posted about his concern for long-term effects of COVID-infected children.

Mr. Scott’s last Facebook post came on April 20. He congratulated his wife of 20 years, Carolyn Lavin Scott, for her nomination for a teacher’s union president position.

Mr. Scott “died suddenly” on April 24, a little over 10 weeks after the second Pfizer shot. Mr. Scott is survived by his wife and four children.

We’ve covered at least three near-term deaths, all being very similar. Dr. Joshimar Henry was a healthy, happy 27-year-old. He received his second Pfizer experimental shot on January 6, 2021. He apparently suffered no ill-effects. But he suddenly died about 12 weeks later. Dr. Thomas Flanagan, 48, died suddenly 11 weeks after his second experimental Moderna mRNA shot. He also experienced no apparent side effects or adverse reaction up until his death. Near-term deaths from these shots occur around the 11 to 12 week mark, based on this small sample. If that’s the case, it’s going to be a scary summer.

Some people’s bodies cannot adjust quickly enough to the synthetic genes and die within hours or days. But the good Dr. Sherri Tenpenny said the real damage begins “42 days or later” after the shots. She specifically mentioned antibody-dependent enhancement (ADE), a dangerous immune system phenomenon brought on after “vaccines.” ADE can lead to dengue shock syndrome, which kills upwards of 30% of people who get it.

We’ll likely never know exactly what happened with these near-term deaths. Mainstream media, big tech and the medical industry at-large protect the reputations of these experimental shots at all costs. Thus all we can do is track the deaths and draw conclusions based on similarities.

Mr. Scott was indoctrinated by the public school system as it relates to these shots. But big pharma and their media are getting desperate trying to convince critical thinkers to receive these experimental injections. New York City Mayor Bill de Blasio announced a partnership with fast-food restaurant Shake Shack. Show your “vaccine card” and you get free french fries, or burgers, or something.

It is up to you to stay vigilant and protect your friends and loved ones.

The shot itself seldom hurts….

What is in it; well that is quite a different matter; is it not?

America is bankrupt and about to default to the Native Americans; it is a dystopian Hell.

So they set up a telethon; the eponymous “Americathon” to try and save the country…

The M.C. of the telethon is Harvey Korman.

He is desperate for a skit or stunt to put on camera that will elicit a large monetary response from the viewers.

So he suggests doing an actual killing of a person on stage.

The coordinator objects; saying “we are not going to do a killing”.

Harvey counters, “What are you talking about? I know fifty out of work actors who will do it for ten bucks!”

Life imitates art; or is it the other way around?

Educators were first in line in our district. Every week a new place was offered where you could get a shot— these were never locations where if anything bad happened, like an anaphylactic reaction, you’d be taken care of properly. People in education are team players and sometimes that trait backfires on them. Not allowed to be contrary– or the peer pressure comes down on you. I have a friend who was quickly influenced by the other staff to take the shots even though she had declared she wasn’t going to. What can you do? I’m fed-up right now with fearful people being airheads about their health.

Always remember that the greatest weakness a person can have is caring what other people think of them; for such a response paralyzes action and will.

Worrying about what other people think about how you conduct your own life and business; and then allowing the opinions of those people to unduly influence you and thwart you from exercising your discretion is the greatest cowardice of them all.

Those who go against the grain; the collective; the hive mind will invariably be marginalized by society. Their tools are guilt and shame; but guilt and shame are artificial constructs; they do not exist in Nature; they are merely clever utilitarian illusions for the purpose of manipulating the weak-willed.

The so-called normal person is not normal in any absolute sense; but only in their relationship to a profoundly abnormal world.

Agreed. This co-worker who took the jab does succumb to peer pressure often. I’m pretty helpless to get her to listen. Nicest gal you’d even know, kind to a fault, but a people pleaser.

No…that is direct from me. It is from a chapter on conscription from a book I wrote in 2019.

The book has only sold about 25 copies in the two years it has been on the market.

Any quote I take from another; I always give proper attribution.

Shame he didn’t ask that about the toxins he received instead of nonsense about healthy kids possibly catching a cold.

My thought exactly. His thinking was definitely backwards.

Three members in my family, all of whom work in the education field, have gotten the shot. It’s unbelievable how indoctrinated people are. My brother insisted that he had done his research on the *vaccine* and was satisfied with what he found. My sister was way too cavalier about it when I brought up the topic. She just blew it off as no big deal and changed the subject. My sister-in-law was unable to be talked out of it. Is it diabolical disorientation? What else can it be?

“No one is more hated than he who speaks the truth.”
___Plato

Having worked in education all my life, I’ve found the trait of being a “team player” sometimes backfires on the skill of independent, critical, contrary thinking. No tolerance for “rebels.” They go along and indeed, perhaps are pressured to take the jab or have their jobs threatened.

I am a teacher and I did not get the shot. Not all of us follow the herd without thinking critically. Mostly I’m concerned about the speed at which it was rolled out and hope to wait and see for five years. I hope I can continue to work without being forced to get it.

It’s either bad or not, and VAERS is now showing that it is not safe, and sometimes lethal. VAERS is only a small percentage of the SAEs out there, the SAEs that are not reported, since it is voluntary reporting, so many more people are dying and being maimed, damaged for life. No life is worth that for a jab that can not stop transmission and is only 1% effective. What they need to do is trash these products and go back to the drawing board, but they are on a roll now; it’s profitable. Five years or five centuries from now, these shots will still be garbage.

Why bother with all the propaganda protections Big Pharma, it’s not like you don’t have zero liability…

I hope you mean on the part of the lunatics giving out the horrible jabs! If these lotteries are a sign of their last push for spreading their poison, their sign of despair, then I will celebrate.