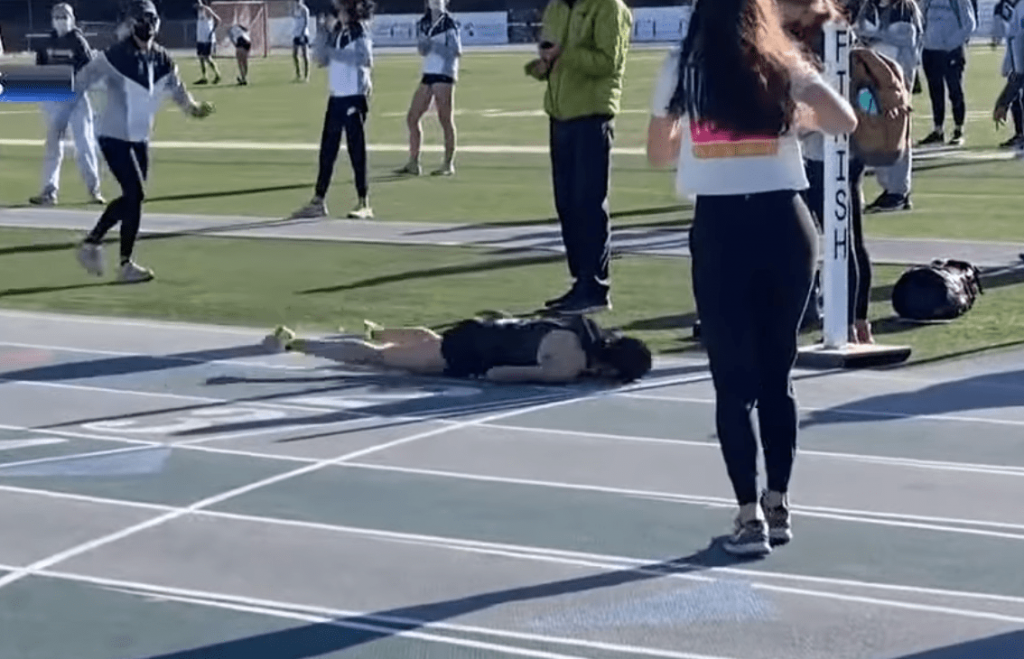 BEND, OREGON –It is a common sense fact that if you cover your nose and mouth with anything, breathing is inhibited. But nowadays, common sense must be proven by scientific studies. And even then, said common sense is dismissed as “conspiracy theory” and/or “disinformation” by COVID zealots.

Dr. Lindsay Bottoms heads the Centre for Research in Psychology and Sports Science at the University of Hertfordshire (England). She has both a Ph.D and a master’s degree in Exercise Physiology. Dr. Bottoms competes in fencing despite being diagnosed with Crohn’s disease at age 14.

She did an informal experiment last year to clarify common sense. It found that wearing a COVID mask under her fencing mask during a three-minute, high-intensity treadmill workout dropped atmospheric oxygen inside the masks to 17%. That is well below the normal 21% at sea level. Her study also found that carbon dioxide levels were 3% inside the masks, double the established 1.5% threshold set by U.K. health authorities. The experiment concluded that any workout longer or harder than three minutes with masks would result in dizziness, headaches and/or worse.

Vitale was dismissed as a “conspiracy theorist.” But common sense prevailed. He won re-election last fall and it wasn’t even close.

Masks are political symbols and signs of obedience. They are even fashion statements pushed by Hollywood and mainstream media in 2021. There’s absolutely no benefit to wearing them other than, like the experimental shots, social media clout from the Fauci crowd.

Summit High School is a track-and-field powerhouse. The Bend, Oregon school has won 17 state titles since 2005 between its boys and girls’ squads. Track-and-field was cancelled in 2020 due to COVID-19. Thus the athletes were anxious to get out there and re-establish their dominance in the sport.

But Governor Kate Brown issued her very dangerous mask mandate last June, requiring masks for everyone over age five, both indoors and outdoors. The mandate also requires masks for people working out at high-intensity in gyms and athletes while competing. It took an extremely scary moment for Brown and Oregon health officials to at least re-consider common sense.

Ms. Williams is an elite athlete. She was not only gunning for a victory in the 800-meter event (two laps around the track), but also the school record. Young Maggie got off to a blazing start. There was no other runner in the picture as she was about to cross the finish line. But Ms. Williams lost consciousness and collapsed. Her momentum carried her over the finish line, breaking the school record with a time of 2:08:45. She beat the former record of 2:10:54 set in 2019 by two full seconds despite the dystopian hindrance over her face that caused her to collapse.

Head Coach Dave Turnbull did not mince words about the bittersweet moment and what happened.

Complete oxygen debt. I’ve been doing this for 31 years, I’ve never seen anybody basically lose consciousness. I’ve never seen that in the way it happened with Maggie. Unfortunately in Oregon we have to follow the OHA (Oregon Health Authority). And the OHA is not reasonable. I would like those people to come out and run an 800 with a mask on.

Ms. Williams said she didn’t know she won the race or that she broke the school record until a few minutes later. She said she felt “super-dizzy” and eventually lost consciousness due to oxygen deprivation. Watch a report from NewsChannel 21 in Bend.

Governor Brown revised her mask rules after the incident. But the changes are nothing short of comical. Athletes in non-contact sports like tennis, golf and track are now “allowed” to remove the face coverings during competition as long as they are six-feet apart. Distance runners must wear face coverings at the beginning of the race, but can remove them “once they spread out.” It is unclear if football and basketball players must wear masks. Oregon is the only state that requires masks for distance runners, according to Oregon Live.

Oregon is perhaps the third-most dystopian state after California and New York when it comes to COVID dystopia. This disheartening photo comes directly from the Bend School District’s website. 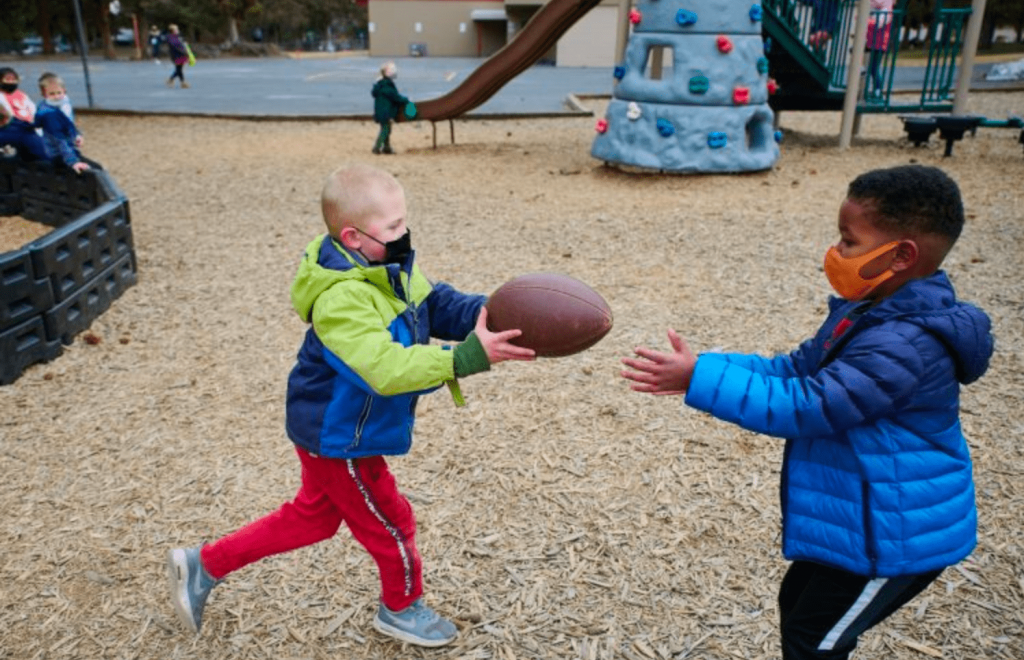 This mask stuff is sheer lunacy at this point. Erin Pein, a school nurse in Stafford Township, New Jersey, was suspended by the district for saying forcing kids to wear masks for seven hours per day is child abuse. Parents in Vail, Arizona shut down a school board meeting in late April and demanded the mask mandate be rescinded.

Masks are going to cause deaths, whether in athletic competition or from Americans tired of it. It appears that the Joe Biden/Fauci crowd simply enjoys wearing masks and needling people (no pun intended) who do not comply with their fetish. Masks are not normal and never will be. Stay vigilant and protect your friends and loved ones.

It’s not just an American thing with masks, sadly. Here in Thailand they mandated facemask wearing in public with an insane up to 40,000 baht/$1400 fine INCLUDING while driving on a motorbike. This is in a country that has the most road fatalities per capita in the world already. Common sense would tell you that mandating something that blocks your lower field of vision and causes brain fog would not make the roads safer. But COVID! Sheer lunacy

Here in Italy EVERYONE except me apparently wears a face nappy as soon as they set foot outdoors. Kids from the age of 6 are made to wear them at school all day (8 hours for some). It’s EVIL. The parents here tho are seemingly all onboard and don’t protest. They should be imprisoned for child abuse and all the head teachers, teachers etc.

I live in the UK and dont wear a mask. I state medical exemption. Sometimes they ask for a doctors note and i remind them i dont need to show one. If anyone dares to issue me a penalty notice, i will toss it in the trash can. They are not going to take people to court, sentence them and jail them for not wearing a mask.

What is the mental intelligence of the Oregon government and educators? Follow the science but whose science? What science? It is basic science that masks restricts the flow of oxygen. One does not need instruments, just wear a mask and you will find out quickly.

What insanity now rules the brains of millions of those who make regulations without even basic science?

The days are soon arriving when many more will show long term adverse effects due to the gene-based vaccines i.e. micro blood clots. However, it will be impossible to link them to the mRNA vaccines. These lipid encapsulated vaccines have long merged with the body cells and disappeared. What remains is the body’s super-charged immune system that will launch fierce attacks on new infections by coronaviruses and the micro blood clots.

The science is not available for such detailed investigations. Even experts are speculating about what might happen.

I am glad in this incident, the runner did not die.

America and the world have embraced communist China as a role model. Our leaders seem to be saying “If its good enough for the Chinese to do, then we should out-due them and wear masks all the time.” The communist party leaders are likely laughing hysterically at what they released upon a world that has given itself over to fear. Looking at this from as a strategy for war and dominating the world…the masks and the fear and pushing these experimental injections, all comes into clarity and makes sense.

I’ve seen a lot of pictures and videos out of China recently, including one from a huge music festival in Wuhan last week. The crowd was all packed in tightly and not a single one was wearing a facemask. China claims they largely “defeated” the virus in their home country. Curiously they only locked down for a few months and were the only major economy to grow in 2020. They also don’t have a very large portion of their country vaccinated. But they sold their lockdown masks vaccine “policies” on other governments hook, line and sinker, leaving the rest of the world to wallow through the government imposed catastrophe. Apparently they read Sun Tzu’s “Art of War.”

Yes! And it was out front and center for all to see, good old arithmetic. China, a population of 1.38 billion. When in April of last year I read a headline stating that deaths to Covid in the US had surpassed those in China, I was concerned! So I looked up how many had died in China at that point, and it was 3,211 or something ridiculous like that. I hit me like a sledge hammer then what an enormous global deception was going on right in front of peoples’ faces. Bizarre. I will say, though, that in So California, for the past ten years it has been common (and insulting) to see Chinese folks wearing masks. Like a Michael Jackson fetish … I thought.

Murder. This is murder being performed. Who on earth wears a mask when running? Who would want to do this? People who do this deserve this to happen to them. Only way for them to learn. Or not because they never will learn.

2 min 8 sec for HS Girls 800 meters while wearing a stupid mask is an unbelievably great time!

I wonder why Maggie Williams wore a mask for her interview. Was she making a point? Maybe she lIkes wearing one.