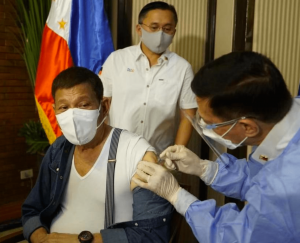 The problem is that only the China-manufactured “inactivated virus” Sinovac Coronavac and Oxford-AstraZeneca viral vector shots are authorized for emergency use in the country. Duterte issued a public apology after being criticized for what looks like avoidance of the shots that every other Filipino is forced or chooses to receive. The optics look even worse now that deaths and adverse reactions are piling up for the “authorized” shots.

At least 24 deaths and 24,698 adverse reactions to experimental injections have been reported to government officials since the March rollout, according to ABS-CBN in Quezon City. AstraZeneca is responsible for 14 of the deaths. Sinovac is responsible for 10 deaths. The Philippines Food and Drug Administration (FDA) went into subterfuge mode from there.

FDA director-general Dr. Rolando Enrique Domingo downplayed the deaths and adverse reactions. He said that the reported deaths are “sad,” but none of them are related to the experimental shots. Dr. Domingo blamed comorbidities, including 11 who died after allegedly contracting COVID-19 despite being “vaccinated.” He said only 344 of the adverse reactions were serious.

Dr. Domingo further justified the deaths by saying 143 AstraZeneca deaths in Norway “mostly happened in nursing homes.” He also said that the United States and Hong Kong have found no causal association between the shots and deaths, so he cannot either. Domingo concluded his press conference with one of the most regurgitated talking points of the COVID-19 establishment. “The benefits of the shots outweigh the risks,” he said.

Americans are in dire shape due to Joe Biden and Fauci acting as head cheerleaders for these experimental shots. But Filipinos are in grave danger under Duterte.

He advocated hard for experimental shots in the Philippines at the WHO last September. Duterte also signed a law in February giving pharmaceutical companies absolute immunity from liability when people are injured from these shots. The law created a $10 million “indemnity fund” to compensate the few people who navigate all the red tape.

Duterte also signed a contract with American drugmaker Novavax in March. The Maryland-based biotech firm is set to send 30 million doses of its experimental “protein subunit” shots to the Philippines. Filipinos will essentially be the guinea pigs for this new shot when it starts shipping this summer. The country is also considering a bill to make the shot mandatory for all citizens.

Obviously the death numbers from these shots are far higher than 26 in the Philippines. These are just the ones we’re hearing about (thanks to a reader named Maiasta). Only the strongest will survive this global war on our right to exist as natural humans. If you do die, go down standing up, not with a needle in your arm. Stay vigilant and protect your friends and loved ones.

Thanks for.your efforts to exposed this plandimic..godbless

I am norwegian. We have around 150 post vaccine death so far, but only 5 of them from AZ. Pfizers is the one used most here. The deathrate seem the same for both on the statistics.