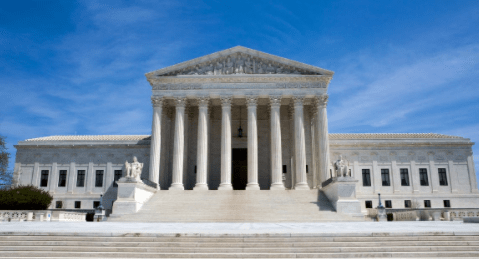 WASHINGTON, D.C. — This article is prefaced with a shout-out to the good Dr. Carrie Madej (maa-DAY).

She is one of thousands of doctors and scientists worldwide suddenly labeled “conspiracy theorists” and “disinformation” by mainstream and social media. Dr. Madej tells peer-reviewed truth about COVID-19 and experimental shots. She is still on Twitter and Facebook for now. Dr. Madej is also featured in a viral video warning people about experiment mRNA and viral vector shots.

She said in a recent interview with The New American:

“The Supreme Court ruled that if there is anything synthetic, not from nature, inside of our genome, then whoever owns the patent on those synthetic parts now owns part or all of you as a human. That means Bill and Melinda Gates, The Department of Defense, [and others] can literally own a human being. If this synthetic code is taken up into your genome, by law, you could be owned overnight.”

Dr. Madej told The COVID Blog via email that she learned about gene patenting from Dr. Craig Venter. He spoke about it during a world symposium presentation. All legitimate doctors and scientists welcome fact-checking and peer-review. Turns out Dr. Madej is onto something, and further affirms every reason not to volunteer for these experimental injections.

The case of Diamond v. Chakrabarty, 447 U.S. 303 (1980) is the first time the U.S. Supreme Court heard a patent case involving naturally-occurring processes and/or organisms. Dr. Ananda Mohan Chakrabarty invented a species of oil-eating bacteria while working at General Electric in 1971. His invention streamlined the process of cleaning up oil spills.

He filed a first-of-its-kind patent for the new genetically-modified bacteria species. The United Kingdom had already granted the patent. But the U.S. Patent and Trademark Office denied the patent because it determined the invention was a living organism. The U.S. Court of Customs and Patent Appeals (now the United States Court of Appeals for the Federal Circuit) reversed the decision. It ruled that just because micro-organisms are alive doesn’t mean they cannot be patented.

Living, man-made micro-organism is patentable subject matter as a “manufacture” or “composition of matter” within the meaning of the Patent Act of 1952. The fact that the organism sought to be patented is alive is no bar to patentability.

The case paved the way for biotechnology companies and universities. The OncoMouse, patented by Harvard in 1988, was the first mammal ever patented. Harvard scientists genetically-modified mice to be predisposed to cancer (thus the “onco” prefix) so other scientists could study the disease.

Scientists have since created an entire discipline on “transgenic non-human mammals.” Of course there are serious ethical concerns. But the practice continue.

The case that provides the blueprint for pharmaceutical companies claiming ownership of your genes is Association for Molecular Pathology v. Myriad Genetics, Inc., 569 U.S. 576 (2013). This case originated from a Utah-based company called Myriad Genetics.

The company isolated the location and sequence of naturally-occurring genes called BRCA1 and BRCA2. Mutations in these genes positively correlate with predispositions to breast and ovarian cancers. Myriad filed patents on these genes in 1994 and 1995, respectively. The patents gave Myriad exclusive rights to cancer genetic testing that isolated natural DNA strands and created synthetic complementary DNA (cDNA) that resembled the original isolated strands.

The USPTO granted both patents in 1998. At least 2,000 other human genes had been patented through 2010, according to the New York State Bar. But the Myriad patents hindered other scientists from doing research on naturally-occurring BRCA1 and BRCA2, and thus hindered breast and ovarian cancer testing by other companies.

Several Plaintiffs, including Yale, Columbia, individual patients, and patient advocacy groups filed a lawsuit against Myriad and the University of Utah in May of 2009. The Plaintiffs argued that BRCA1 and BRCA2 are not patent-eligible subject matter under 35 U.S.C. § 101 because they are naturally-occurring. Myriad argued that it isolated the sequences of the DNA and that the Patent Office had issued patents for other companies doing the same thing.

A long legal battle ensued that included two writs of certiorari to the U.S. Supreme Court. The Federal Circuit twice affirmed that both isolated DNA and cDNA are patentable. Ultimately the Supreme Court ruled that only cDNA (synthetic DNA) is patentable. Isolated, natural DNA is not patentable. Breast and ovarian cancer screening got much cheaper after the ruling since Myriad no longer owned patents on naturally-occurring genes and thus the testing.

When it was all said and done, the Supreme Court invalidated five of Myriad’s 520 patent claims. Myriad sued competitors for marketing ovarian and breast cancers tests based on the two natural genes after the Supreme Court decision. Ambry Genetics won a case against Myriad in 2014. The company said via press release:

Yes, this article contains a lot of scientific and legal mumbo-jumbo. But in a nutshell, biotechnology companies can own living things if said things are genetically-modified and not naturally-occurring. No mouse is born in nature like the OncoMouse. It is thus patentable. Oil-eating bacteria come from genetic manipulation, thus patentable.

Notice how all these so-called doctors and scientists avoid pointing fingers at Pfizer, Moderna, Johnson & Johnson et al. when someone dies within hours, days or weeks of receiving their shots. It’s almost as if said doctors and scientists are carefully navigating the trademark and patent landscape. They don’t want to trespass on someone else’s property, if you will. Moderna owns several mRNA patents. Doctors and hospitals wanting a piece of the mRNA pie cannot bite the hand that feeds them.

The synthetic mRNA of Pfizer and Moderna, along with the viral vector DNA delivery systems of Johnson & Johnson and AstraZeneca, change your genetic code, making you “genetically-modified.” Granted mainstream media say the foregoing is “conspiracy theory.” But Moderna Chief Medical Officer Tal Zaks tells you straight up that 1) the shots change your genetic code and 2) the shots do not stop the spread of COVID-19. He says the Moderna shot is “hacking the software of life.”

Viral vectors do the same thing.

So do these companies “own you” once you get the shots? Well, they own mice and bacteria created with their inventions. Once you get these shots, you are no longer a “naturally-occurring” human being. Prosthetic limbs, breast implants, etc. are not “natural” per se. But they are removable and not part of what fundamentally makes you human. Gene therapy is irreversible. Do the math yourself.

Contact COVID Legal USA today for assistance with representing yourself against mask mandates, mandatory vaccines, and other COVID-related restrictions.

We are under constant attack. Join the fight against censorship. PLEASE SUPPORT US VIA PAYPAL. Venmo @thecvdblog.

They’ve been after your DNA for many years now, here’s one reason why – they make a drug custom fit for your genome, and charge you whatever they want to cure you. You can’t pay? You die. All natural cures now being banned. the first action signed by none other than Pres. Trump in Dec 2020.

The idea that customers are paying to have their DNA sequenced, only to have the drugs developed from that data sold back to them has sparked some backlash against the 23andMe and GlaxoSmithKline deal.

They can sneak their way around a lot of things, but they can’t own your genes when they force, in any and every way possible – physically, threats of losing income, persecution to remove freedom, liberty and rights, etc – their vaccines on you. Such a law in itself would negate the “I own your genes” argument on its face!

They can do whatever they want. Who is going to stop them? The sheeple would have to actually wake up and get off their butts and fight. Not going to happen. Most are too stupid.

You got more lawyers than Pfizer? You own a judge that’ll protect you against that other vaccine Company, the CDC? Sorry to tell you, but your personal morals and viewpoints mean nothing to the Independent Judiciary. I saw this patenting facet of those unproven experimental gene manipulators masquerading as vaccines from day one, and I see no way to protect oneself once you accept their vaccine-like product.
Not only will Baal Gates own your genome, he will have full legal authority on what medical treatment you may or must receive, what food you may eat, how long you live…
As for forcing their unproven experimental gene manipulators masquerading as vaccine-like products on us, well, they own the shop where you buy food, they own the shipping company that brought that food, they own the factory that processed your food, they own the farm where the food grew, they own the genome of the cows, corn and oil, they own the seed and fertiliser, they own the politicians that legislate your privileges and duties, and now they will own your metabolism.
If you can think of a way to avoid their poisons, let us know, I don’t want it either!

Thank you, brave Soldiers for Truth. I hope you will all be considered the Saviors of Mankind.

Supreme Court…..IS WRONG and guess what else…

I recently listened to a William Schnoebelen podcast. He claims that the COVID vaccine is designed to transform us into the beast/chimera when the mRNA in the vaccine attaches to our DNA. The Beast literally supplants the Creator in our bodies. The Sign of the Beast may be the vaccine passport that indicates that we have been injected with the Beast and that the Beast now stands in our bodies which, according to 1 Corinthians 6, are the temples of the Holy Spirit.
2 Thessalonians 2:3–4 Let no man deceive you by any means: for that day shall not come, except there come a falling away first, and that man of sin be revealed, the son of perdition; Who opposeth and exalteth himself above all that is called God, or that is worshipped; so that he as God sitteth in the temple of God, shewing himself that he is God.
Everyone who is injected with the Beast becomes the Man of Perdition because they are one with the Beast. They are owned by the Beast. The Bible talks about how the fallen angels had children with human woman who became the Nephilim. Schnoebelen implies that satan and/or the fallen angels are trying to do that again by joining our DNA with their mRNA. If the vaccine is creating chimeras, then the government is facilitating the creation of the anti-messiah/Man of Perdition by coercing its citizens to become one with the beast.

I’m a 69-year-old retired housewife mother of three divorced and I’m not Maxine take her and I don’t plan on starting over here no health issues alive and well. can I contribute as much of that to the lack of vaccine injections and great DNA from Polish parents fabulous DNA genetics all my three children are perfectly healthy my three brothers are perfectly healthy we’re all doing very well so there is something to Be thankful for. great people risking life Career wealth freedom to let this information be known and I thank you so very much I love you wonderful people. thank you