SAN FRANCISCO — A 42-year-old information security professional, known for his work on the Domain Name System (DNS) protocol, is dead after weeks of unnecessary needling (no pun intended) of those who didn’t agree with him.

Mr. Dan Kaminsky received his first experimental Pfizer mRNA shot on March 22. He made it very public on Twitter. 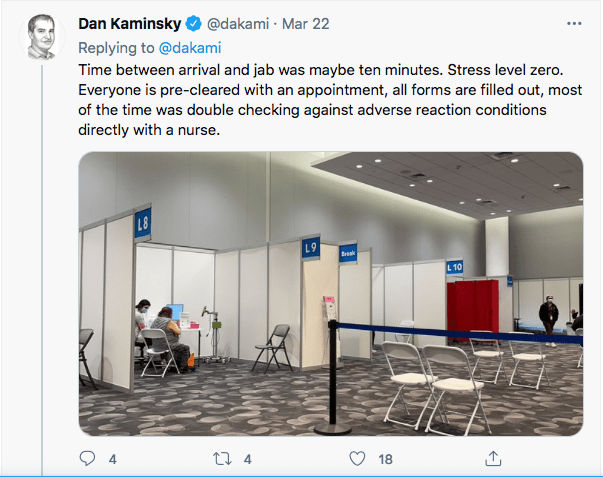 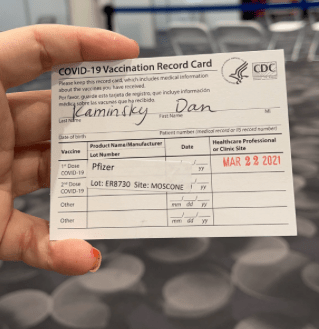 Mr. Kaminsky, a co-founder of Human Security (formerly White Ops), went on what can only be described as a virtue signaling rampage for the next several weeks.

It culminated in Mr. Kaminsky gloating further about his second experimental Pfizer mRNA shot on April 12. 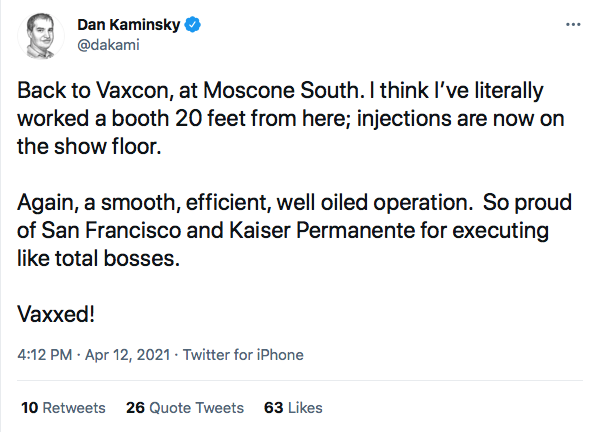 He died Friday, April 23 at his home in San Francisco. Wikipedia, the family and mainstream media say the cause of death is “diabetic ketoacidosis.” His niece defiantly continued the attacks on anyone and everyone who does not agree with the experimental shot agenda after her uncle’s death. 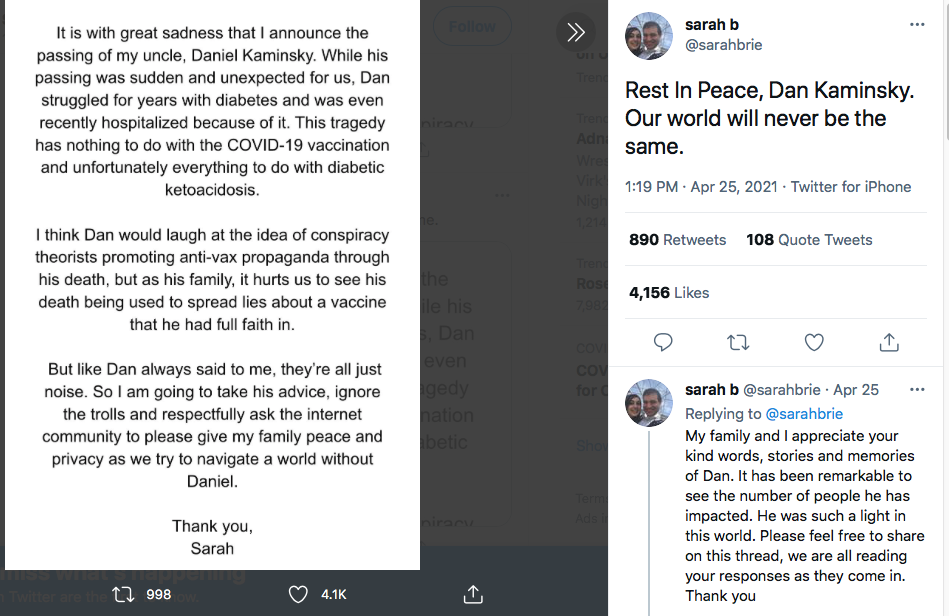 Mr. Kaminsky is perhaps best known for demonstrating security vulnerabilities on Facebook and Paypal back in 2008. There is no word on funeral services as of publishing.

We don’t rub salt in the wounds of grieving families. But you reap what you sow. If you want the experimental shots, get the experimental shots. Do not get on social media insulting others who do not want experimental chemicals and nanotech in their bodies. We’ve pleaded with the public to stop posting these “vaxxed” tweets and Facebook/Instagram updates, to no avail.

Sadly, we simply screenshot every “vaxxed” post we see on social media, and continually follow up thereafter. Please don’t be the next dead virtue signaler. Get your shots in silence and we’ll pray for you. Stay vigilant and protect your friends and loved ones.

Maybe he sees more clearly now. Or not. Rest in Peace.

So liver related? Similar story to this story. young woman from Utah.

His vaccine card does him no good now. However, Bill Gates is celebrating as depopulation grows

His tweets are so de classe and written in such a low bred fashion…that I find it hard to believe he was an expert on computers. The vernacular and general choice of words sounds like something a high school dropout might invoke.

Deserves it. From using twitter, the constant twitter updates and stupid jokes relating be a part of this vaccine club. Makes me sick.

the blind lead the blind…and both end up in the ditch.

The mightiest cliches vindicated yet again!

Hey Dan, as you liked to say, you can’t have it both ways. Dan’s neice was all over social media blasting those of us who ask that cooler heads prevail with this new “the sky is falling” pandemic and the miraculous vaxx cure-all “for the greater good”, whoever that Auschwitz-style motto serves.

However:
(1) neice says Dan (and yes, I met him at those IT places back in the day, where as almost the lone STEM female I was leered at by male-nerds for the pair between my shoulders instead of the one on top) – niece says Dan always had struggles with his sugar, and ketone issues. Diabetes 1 is an autoimmune disorder. Vaxx contracinidated, per CDC.
(2) Dan stated the nurses at the Vaxx center did a medical background on him, and if Dan was being HONEST, he would NOT have denied these KAH struggles, which would have made him ineligible in any sane, medically ethical world. Ahh! there’s the rub.
(3) The number of diabetic/insulin resistant folks (over 50% of Western pop.) over 100 million Americans per the CDC report (loook it up) who are getting the worst of the gene therapy is directly due to the nature of the said gene therapy (look that up too, the CDC says the same thing). Blood sugar spikes – some massive – are to be expected and are being reported.

Diabteics are warned that the vaxx WILL CAUSE MASSIVE SUGAR CONROL ISSUES AND WARNED DIABETICS NOT TO TAKE THE VAXX IF THEY HAVE ISSUES.

(4) So niece of Dan, you are doing a major disservice to diabetics like your uncle – unless you want others to be maimed or die. Do your reseach, you vaxx Karen you.

Finally, Dan, remember I used to say the big human problem was TMB and TMP. So sorry, it appears they also felt the same way. You didn’t think they’d take you out, of all people. The jokes on you. And us. Sorry. But that ego, you know.

I find it funny that his niece said that her uncle would not believe in so called anti vax nonsense and that we are spreading false rumours about these vaccines causing death. Well my dear you clearly need your head examined because it was exactly the reason your uncle died. At least we are warning people of the dangers they face (you know: DEATH!) all the while you are encouraging people to commit sucide.

This vax should be given to politicians, Hollywood celebs, feminist activists, and all law enforcement people.

I would add in all LGBT, pro abortion people, liberals, mainstream media, those behind social media platforms etc, and anyone that supports any of the evil agendas like LGBT abortion or feminism, easily 3 of the greatest evils this world has ever seen.

My roommate’s best friend took the jab (both of them) about a month ago. He was on dialysis yes and had diabetes but he was doing well and was thriving. He took the jab and evidently later fainted at home hitting his head. We don’t know how soon after the jab that was but it happened. He went to the emergency room for this and then was released later. Then after that he started going downhill fast. Long story short he went to the emergency several times for weakness and low blood pressure and losing consciousness. He also had a tremendous amount of pain from his complaints to my roommate. My roommate took him twice to the emergency room. The other times were by ambulance. The last time he was in was the final time (a few days ago). He lost all ability to recognize anyone and fell into a coma. The doctors told the family that it was best to just let him go since he is 68 years old with underlying conditions. And so the family agreed to withdraw all medical intervention except for pain meds. The thing of it is, I saw him before all this happened too, and it looked like he was doing really well. But he wanted the shot and got both Moderna shots. We tried to convince him not to take it because it is unproven to be safe. But he wanted to take the shots. He believed in the men in the white coats and in fact he has been a captive of the medical industrial complex for many years. It is sad.

They should just focus on politicians, Hollywood celebs and leave the poor andinnocent citizens alone.

Natural selection folks. We’re getting rid of the weak minded and spirited people. Only the best will survive this.

Aidan
Reply to  the joker

These vaccines are a blessing in disguise. Here’s to world with less morons.

He did say he thanked them for “executing like a boss.”

I have my cover story prepared….I will claim I have suffered severe allergies to previous vaccinations prior to my travels (typhoid, malaria, yellow fever, dengue etc). The doctor or my employer has no means to confirm….so I am likely to be excused.

No need to be a hero and loudly proclaim…I shall not be vaccinated. You can lose your life, your job or be hounded out of town. This is harsh reality. The world is so fixated on getting everyone vaccinated. It is a Mad, Mad, Mad, World.

So, get your cover story prepared.

A story like this proves that extensive amounts of formal education does not teach the Statist to exercise Critical Thinking…the brain gets smart, but the head gets dumb…and they all litterly fight to the death to defend the system which consists of the Big Sugar Government, controlled Media Cartel and the Scientists.Sorcerers paid off by Big Pharma…sadly they will not be paying for the families funeral expenses as they continue to defen the death serum…Statists, Order Followers, Corona Zombies polished to perfection…these people with their delusions will take many more down with them…