RIYADH, SAUDI ARABIA — Researchers at King Fahad Medical City in Riyadh published a case study in the March 2022 issue of the peer-reviewed journal Annals of Medicine and Surgery. The abstract states that “mass vaccination remains the most critical way to halt the spread of the COVID pandemic.” Then it goes on to chronicle yet another spine-chilling, post-injection skin disease that are becoming all too common on this blog.

A 78-year-old man arrived at the King Fahad emergency room with numerous bullae (blisters) and hives all over his body. The blisters started forming one day after the man received his second Pfizer mRNA injection. He suffered no apparent adverse reactions from the first shot 21 days earlier. The patient also had an abnormally high count of white blood cells called neutrophils upon checking into the ER.

Researchers diagnosed him with bullous pemphigoid. 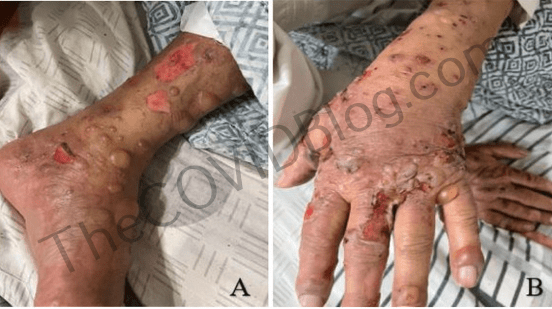 The bullae and hives started healing after three days of the foregoing steroid and ointment regimen.

But the patient wasn’t even close to being out of the woods.

The patient returned to the hospital three weeks later for a check-up. A skin biopsy revealed “modest perivascular lymphocytic infiltrate,” also known as Jessner disease. The condition is benign, but also poorly understood by doctors despite being first described in the 1950s. Some doctors don’t recognize it as a real disease, and instead, view it as a precursor of some other condition. The foregoing, and the presence of white blood cells called eosinophils, led doctors to conclude the patient suffered from drug-induced bullous pemphigoid. He remained on the steroid regimen.

Three weeks later, the patient was back in the ER with cognitive issues, elevated heart rate, low blood pressure, difficulty breathing, and a fever. There were no new bullae and hives. But his skin literally looked like it was rotting. 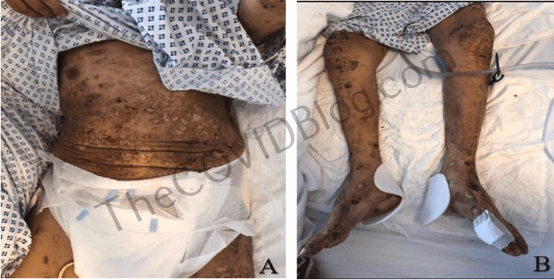 Doctors diagnosed him with a severe case of sepsis. The next day he was diagnosed with a pulmonary embolism, a blood clot in his lungs. Doctors administered blood thinners and antibiotics. The patient was discharged from the hospital after 25 days of steroids, antibiotics and blood thinners.

Four weeks later, the patient was found dead in his bed at home. Researchers concluded that “bullous pemphigoid might be caused by the mRNA (Pfizer) Covid-19 Vaccine.” Read the full study here.

We added a new category for amputations a few weeks ago, as those cases are becoming more frequent. Now we’re dding a category for skin disorders as these cases are also increasing. There’s no way this blogger or nearly all readers here would have ever known about diseases called Stevens-Johnson Syndrome, toxic epidermal necrolysis, erythema multiforme, bullous pemphigoid, and other strange, scary post-injection skin disorders if these experimental shots were not forced onto humanity.

Leprosy, also known as Hansen’s disease, was once the catchall name for all of these diseases 100 years ago. It was also a frequent punishment that God inflicted onto sinners in Biblical times. There was no disease that evoked more fear in Biblical stories. In fact most people would probably rather die than walk around “leproused.” It makes you wonder how many vaxxed people are too ashamed and repulsed to come out in public with these diseases. There are 1,186 cases of general post-injection skin disorders in VAERS as of March 4. Thus in real life, there’s likely well over 100,000 of these cases in the U.S. alone.

Only fools are getting their first injections and/or boosters in 2022. There’s far too much information out there for any reasonable, rational person to further poison themselves. The good news is that all these skin diseases develop within days of the injections, booster or otherwise. If there is no sign of “leprosy” after a week or two, you’re probably in the clear.

That was my first thought too. Poor man, he suffered so much.

Perhaps the ones who die quick from the suicide jabs are the lucky ones.

Doesn’t it seem like the world is getting worse, much worse since 2000? Really accelerated into a full throttle nosedive since 2020.

So since he was septic can we classify him as “walking Dead”. I now understand why China’s quarantine measures are so different from other countries.

I am trying to decide : who is more retard; the man who put that poison into his body or the doctors who are saying that that poison is a blessing from heaven.

Oh well, who cares, it is a perfect match anyway. The ones pushing the vax and the ones receiving it, are made for one another. Who am I to try to disrupt such symbiotic relationship.

I have personal knowledge of bullous pemphigoid. It can be caused by pharmaceuticals, and there are a number of different ones that can cause it. Steroids to treat can rob a person of sleep, which can harm the heart, leading to cardiac arrest.

I am not invited to my nephew’s bday party because I am not vaxxed and had “covid” more than 6 months ago and beat it with ivermectin. I feel badly for my nephew and niece being raised by morons. I pointed out that so-called “vaxxed” people still get “covid” and are also contagious, but that’s too inconvenient for the parents. Sad, but I am happy to remain true blood and not think I’m a walking heart attack, blood clot, skin disease away from death.

I sympathise for your niece and nephew, I can only imagine the convid hysteria, induced by their parents, that they are having to live with, courtesy of the people who are supposed to be their protectors.

It is sad but like the French version of Henry Kissinger (The name escapes me) said the stupid ones will rush forward to kill themselves but we’ll have to trap and force the thinking ones in reference to population reduction.

The best thing I ever did for myself, was to tell my biological family to get off my back a long time ago.

Another good thing I did, was to keep repeating “no way” like a broken record, when in February 2021 the hospital staff told me that I was “lucky” because I am “elligible” for the con-vid vax.

And I bet they didn’t give him even a lick of vitamin C.

exactly, or going out into the sunlight, would’ve cured his whole body

“With” rather than “from” is a totally different meaning.
They’re already shifting the narrative.

looks like another case of decomposition due to the depop shot