MESA, ARIZONA — Ms. Whitney Peterson has overcome a lot in her life. She suffers from Mast Cell Activation Syndrome (MCAS), which is essentially chronic anaphylaxis due to false internal signals. Ms. Peterson also suffers from Postural Orthostatic Tachycardia Syndrome, or POTS. It is a circulatory disorder that causes brain fog, fainting and elevated heartbeat.

Ms. Peterson managed those two conditions with dietary supplements and lived a relatively-normal life as a result. She loves the outdoors and frequently went hiking and camping. 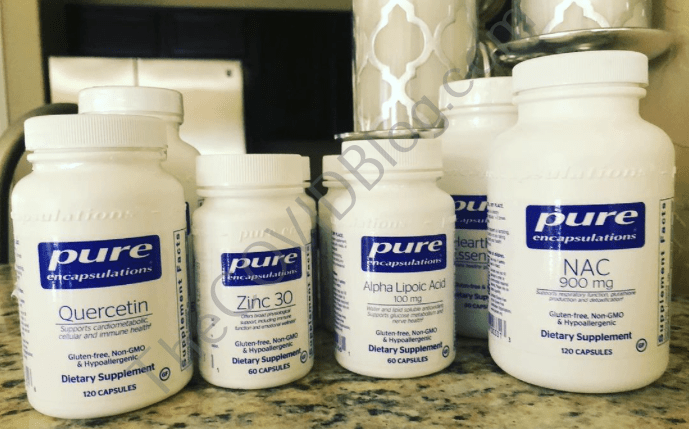 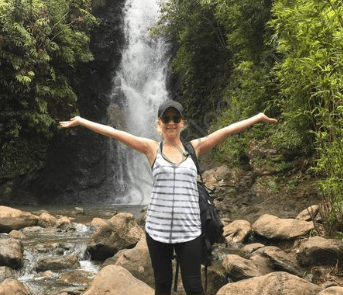 All of that changed with one fateful decision that she’ll regret for the rest of her life. Ms. Peterson received her first Moderna mRNA injection on October 12. 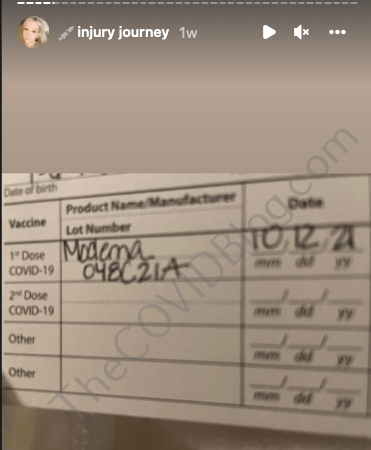 She developed “chest tightness” less than a week later. That was followed by shortness of breath, to the point that she could barely move without becoming winded.

Ms. Peterson finally called her doctor after a week of symptoms and hoping she would heal on her own. Doctors advised her to go to the emergency room. But due to being immunocompromised and afraid of catching COVID-19 at a hospital, she refused.

Now entering the second week of symptoms, Ms. Peterson started experiencing elevated heart rates. It would be as high as 140 bpm just from walking up stairs. That was followed by chest pain, dizziness and stabbing heart pain that was so excruciating, she would scream.

Ms. Peterson reported that she’d been to a cardiologist four times by December 5. But due to her MCAS, she’s unable to take the contrast agents necessary for MRI enhancement so doctors can see her organs more clearly. A Mayo Clinic doctor finally diagnosed her with myocarditis.

Ms. Peterson made clear that she is “not anti-[vaxx]” and that she “desperately” wanted to get the shot. She also believes that the Pfizer mRNA injection would have been safer and perhaps not triggered all the adverse reactions. 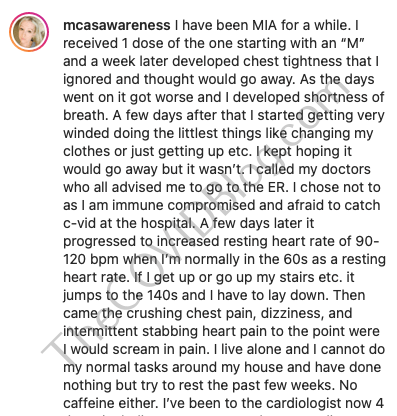 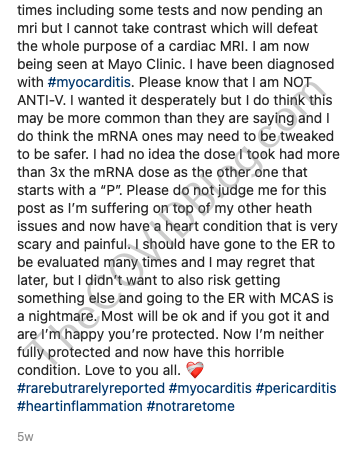 A few hours later, on December 5, Ms. Peterson posted a photo of her red, swollen arm from the actual injection. She referred to it as “COVID arm” and “Moderna arm.” 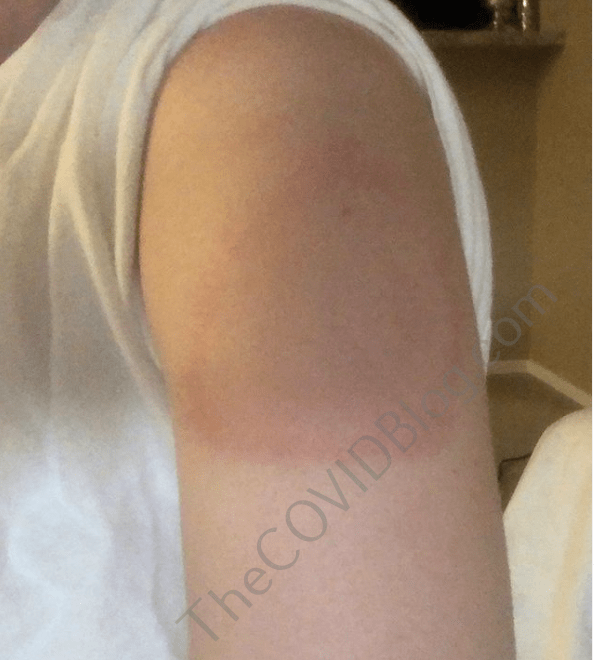 The next day, December 6, she reported a near-universal complaint among the vaxx-injured. Doctors were not helping her and not listening to her complaints. 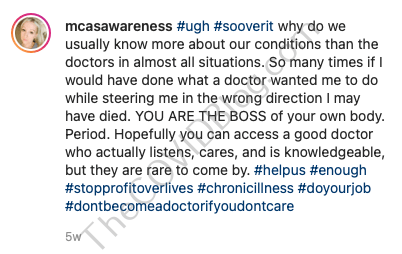 Things progressively worsened as the days went by. She reported vascular inflammation and mitochondrial damage on December 26. The previous means her blood vessels are swollen and potentially impeding proper blood flow. The latter means her cells aren’t converting food and oxygen into energy. 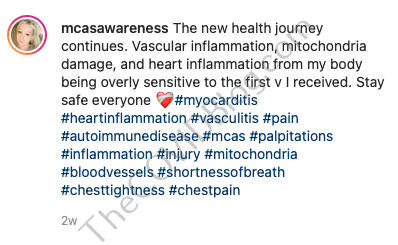 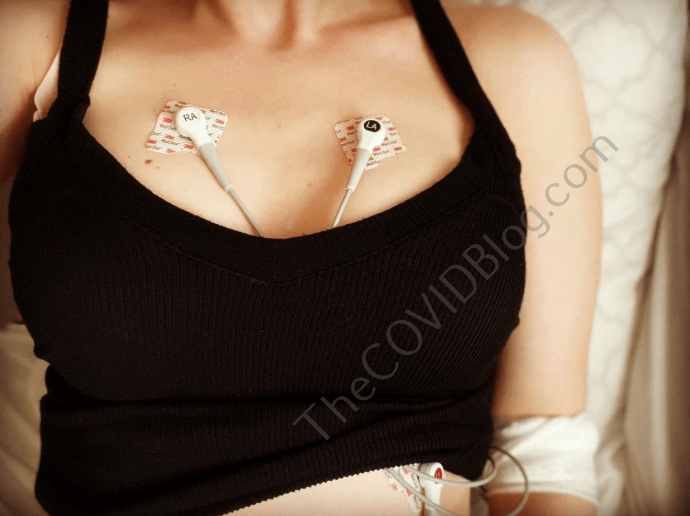 Ms. Peterson posted several updates, reminiscing about her previous life before Moderna. She said she feels angry and deceived. Ms. Peterson also said she will “never take another [vaccine] again.” 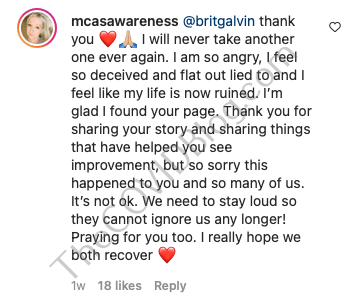 The only good news is that she got in contact with Ms. Marah Johnson, the mother of 21-year-old Madeline Johnson, who still suffers from the post-Pfizer adverse effects. Marah told Ms. Peterson about Dr. Mark Ghalili in Los Angeles. He’s helped Madeline and other vaxx-injured patients improve with regenerative treatments. But said treatments cost upwards to $20,000; and Ms. Peterson’s insurance does not cover it.

A GoFundMe page is collecting funds for Ms. Peterson’s treatment.

This article is in no way meant to disparage Dr. Ghalili. He was apparently confined to a wheelchair years ago after an adverse reaction to an antibiotic. Dr. Ghalili healed himself and is now helping people injured by the mRNA and viral vector DNA injections. He also advocates for Vitamin D intake for so-called COVID-19 prevention. But $20,000 to treat a vaxx-injured woman?

This blogger was in his mid and late 20s in the early 2000, taking a blood pressure pill every day. But it made no sense. Workout five times a week, eat healthy, and no congenital defects. A Chinese doctor on MySpace told me to eat a whole raw onion and several garlic cloves every night before bed for two months. Blood pressure was normal thereafter, without pills. No American doctor would have ever told me to do that, particularly for free on a social media platform.

NASCAR is a fringe sport in the United States. But it has the right idea. Drivers place the logos of all corporate sponsors on the car. Doctors should do the same. The Cleveland Clinic announced in 2008 that it will disclose all business relationships between its doctors and pharmaceutical companies. But that only happened after a doctor sued the clinic after being fired for alleged conflicts of interests with a medical device firm.

The bipartisan Physician Payments Sunshine Act was introduced in 2008. It was supposed to force disclosure of all gifts and payments to doctors by pharmaceutical companies. The law was enacted as part of the Affordable Care Act in 2010. But subsequent studies on the law have found that it has to teeth. The law actually increased drug costs for patients and had little to no effect on doctors prescribing brand name medications vs. the cheaper generics.

We hope Ms. Peterson gets the help she needs. But this story represents nearly everything that’s wrong with U.S. healthcare and this COVID dystopian society. Stay vigilant and protect your friends and loved ones.

I developed MCAS after a Yellow Fever vaccine in 1999 that almost killed me. I keep it in check through diet and other natural means. However it still flares up from time to time. The pain is intense. In the past this pain has left me on the floor, curled up in the fetal position, wishing for death…that’s how bad the pain can be. Because vaccines are a known cause of MCAS, I find it baffling she would get any vaccine. I suspect that a childhood vaccine was what caused her MCAS initially.

Vaccines are the biggest scam and cause of pharma induced ill health and death world wide. There is no safe vaccine.

Another sad story. Thank you for the tip about onion and garlic. Garlic is a wonder root.

In addition to garlic, may I also suggest:
Turmeric, taken with freshly crushed black peppercorns (the piperine in the peppercorns increases bioavailability or the curcumin in the turmeric).
Fresh ginger root.
Polyphenol-rich foods. Such as pomegranate, fresh (or defrosted from frozen) cranberries (cranberries are good in smoothies or as a topping on granola or porridge oats), fresh blueberries.
High-cacao chocolate or cacao nibs.
Cayenne.
Lycopene (tomato paste or tomato puree taken with a fatty meal to increase absorption of the lycopene by the gut)

I’ve read a lot of those recommending garlic cloves for parasites and somewhere I read about the onion….related to parasites I think and/or pathogenic bacteria/fungus….careful on the garlic cloves…some stomachs cannot handle so much raw-but if you chop up with a food of some sort-yogurt-and in olive oil (dip bread in as in Europe) it goes down easier.

Yes, POTS is a common Vaccine Injury as well.. These diseases are very odd, scary, & debilitating, so maybe it made her more eager to fall back on the Covid Vaccines.. Also, there was NO Way that she should have taken these shots with Severe Allergy issues!!.. Not Advisable!!.. I never quite understand why people quickly walk right into potentially Fatal, Tortured illness like this. Also, Women need more dedicated Medical Care!!!- If you have complicated conditions, you need 2nd, 3rd, or more opinions before you Risk your Life-?!!-
She’s really lucky that she hasn’t died yet!..

The insidious thing about childhood vaxes is that it can take years for autoimmune diseases to show up. So parents don’t connect the shot to the disease. It took me decades to connect my T1D (type 1 diabetes) to my childhood vaxes. But yes, I suspect it played a major role (aluminum in vaxes cause a hyper-immune response). But now we’re seeing T1D develop in days after the C-vid shots, which have more metals toxic to body cells.

“Ms. Peterson made clear that she is “not anti-[vaxx]” and that she “desperately” wanted to get the shot.”

At this point in history there is nothing wrong in admitting you’re anti vaxx. And if people are really anti vaxx but don’t want to admit it because they don’t want to be hurled insults by Joe Normie then you’re a coward with no principles.

He who dares not offend, can not be honest.

And I’m still waiting to hear how being ‘anti-vaxx’ harms the vaxxed, and how being pro-vaxx helps the ‘anti-vaxxer’, as the vaxxed seem so self-righteous here and no one has yet to offer why.

This woman was lead by her fear of the convid, even after the first injection jacked her up she was scared to go to the hospital to get checked out for fear of ‘catching’ the convid. She seemed to have made it from March 2020 – October 2021 without dying from the convid, maybe she was swaddled in mask and faceshield? Maybe this is how she survived life. She was lead by her fear and it took her to the no-good-place where fear leads you if you allow it, but it seems to have been her choice here. I wish her all the best.