JOHANNESBURG — An influential 35-year-old digital media expert is dead in one of the fastest post-injection deaths we’ve covered in months.

Mr. Siyabonga Africa received his first dose of experimental Pfizer mRNA on Friday, July 16, according to his Twitter account. The first two comments on the tweet were a woman telling him “well done,” and another woman with party emojis. 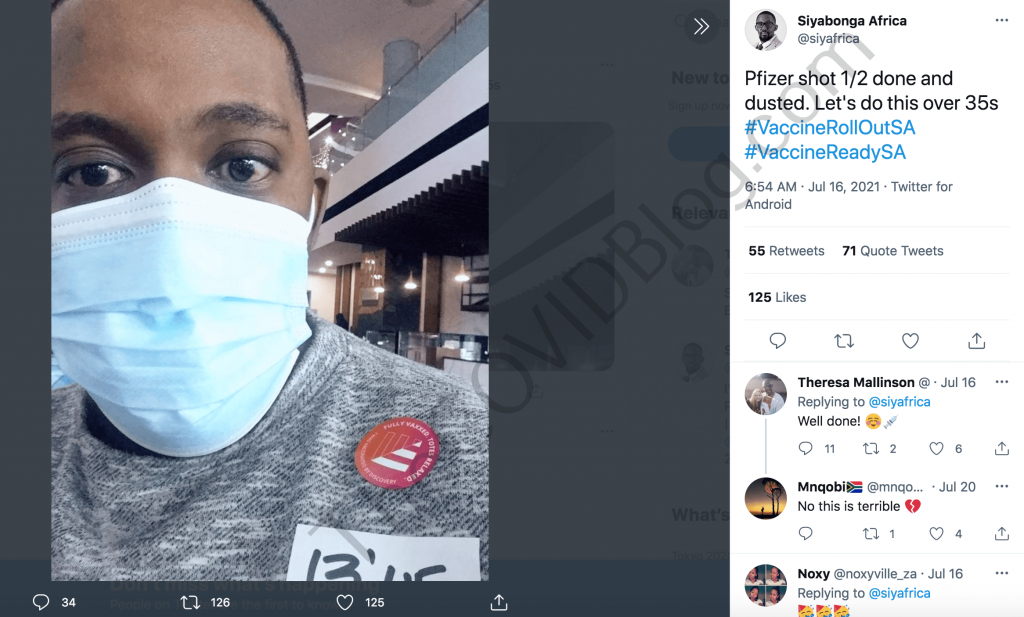 He retweeted two pro-mRNA posts shortly thereafter. Two days later, Sunday, July 18, he retweeted a post about Fauci allegedly receiving his second dose of experimental mRNA on January 19. Fauci said he was “knocked out,” fatigued and achy for 24 hours thereafter. Mr. Africa wrote, “This is me with dose number 1. It’s been 48 hours of hell.” He collapsed in his home on the night he received the injection. But paramedics dismissed it as nothing. He was not hospitalized. 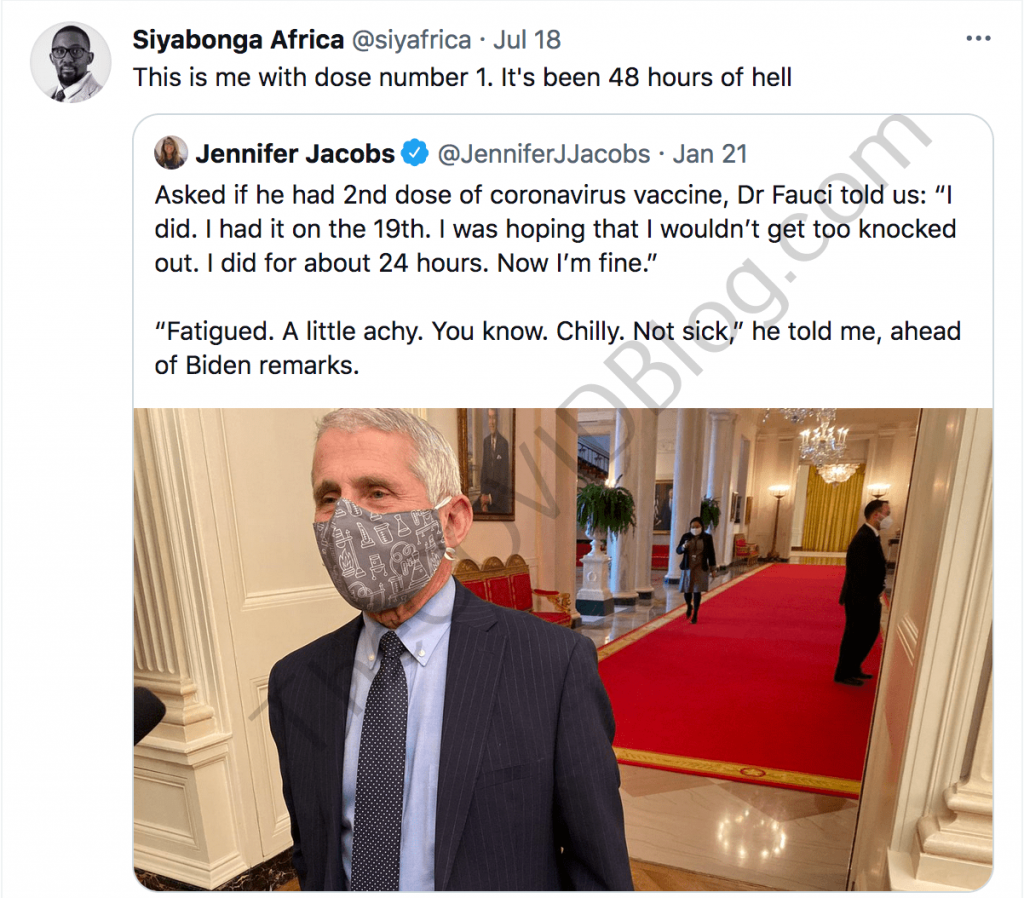 Mr. Africa encouraged another person to go get the mRNA injection that day as well. 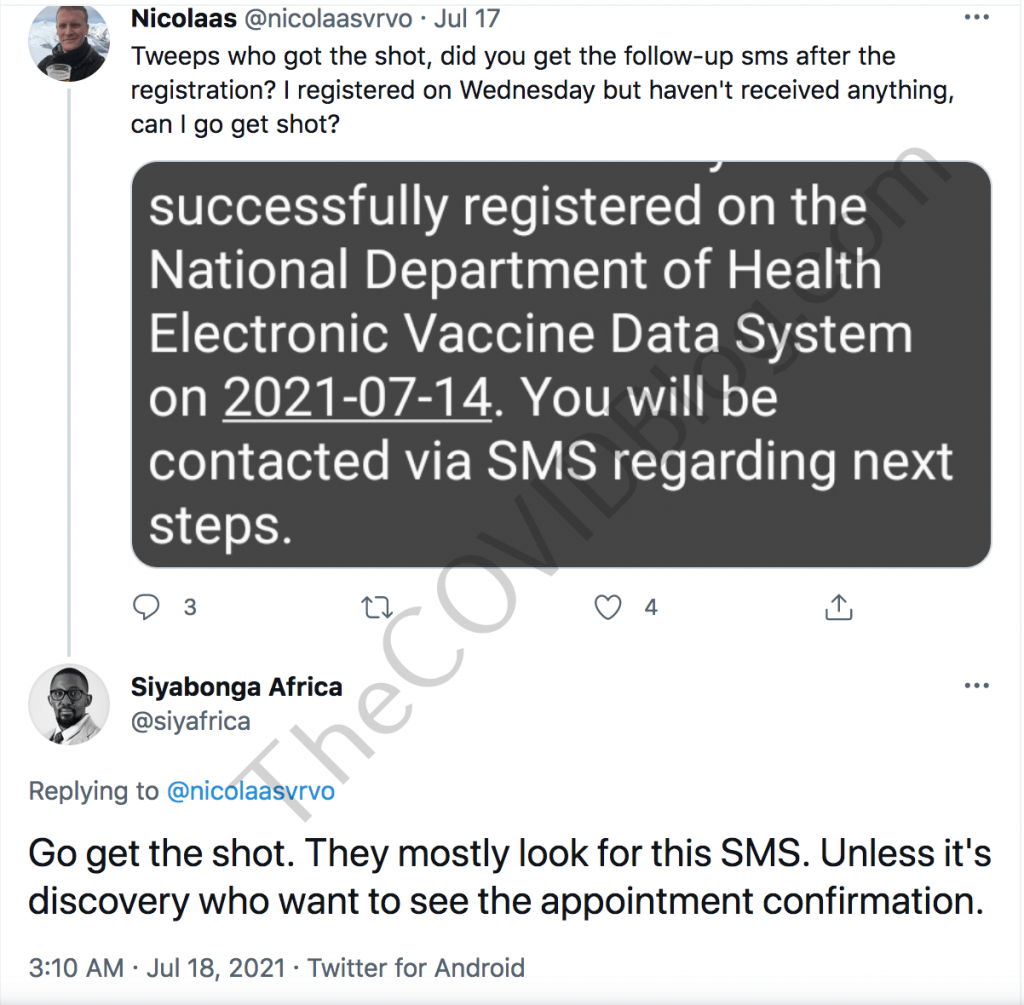 He also retweeted a doctor that day who said she is here to comfort anyone having vaccine adverse effects. Mr. Africa replied, complaining of a fever, nausea and inability to move ever since he received the injection. But then he said, “No regrets, I’d still get the shot if I knew this is what I had to look forward too.” 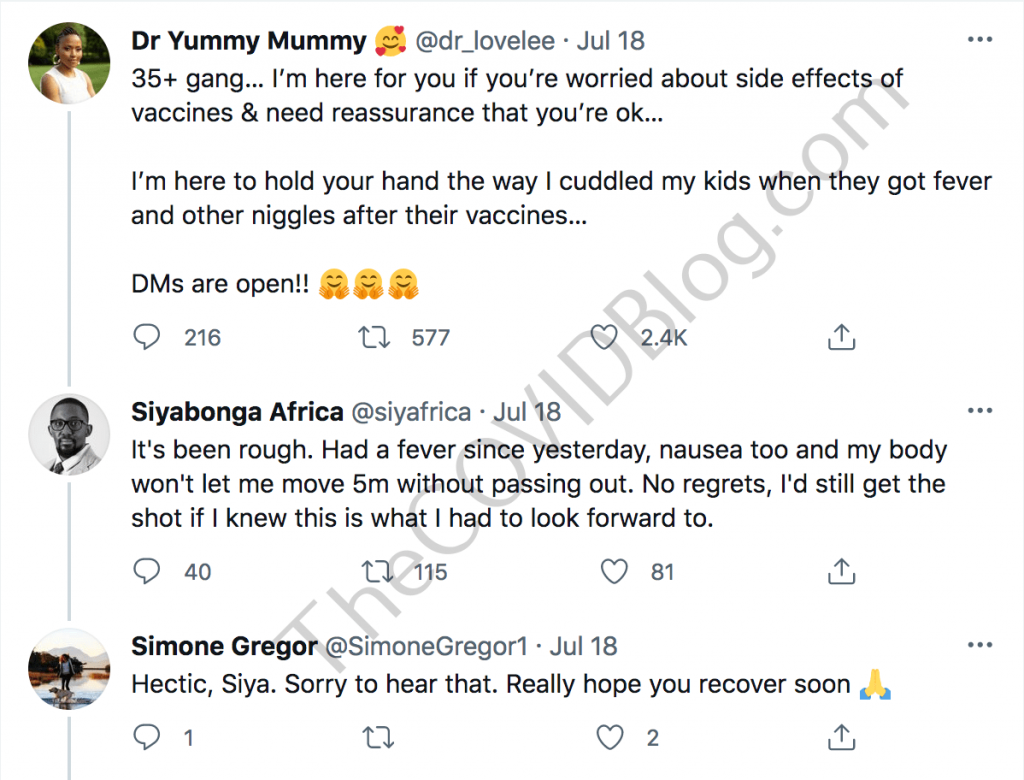 Simone Gregor, his friend/colleague, wished him a speedy recovery. Ms. Gregor replied again on Monday, July 19 and asked “how are you feeling today?” When he didn’t respond, she tried sending him a message on WhatsApp. Ms. Gregor then received a message from one of Mr. Africa’s family members. He passed away early that morning. 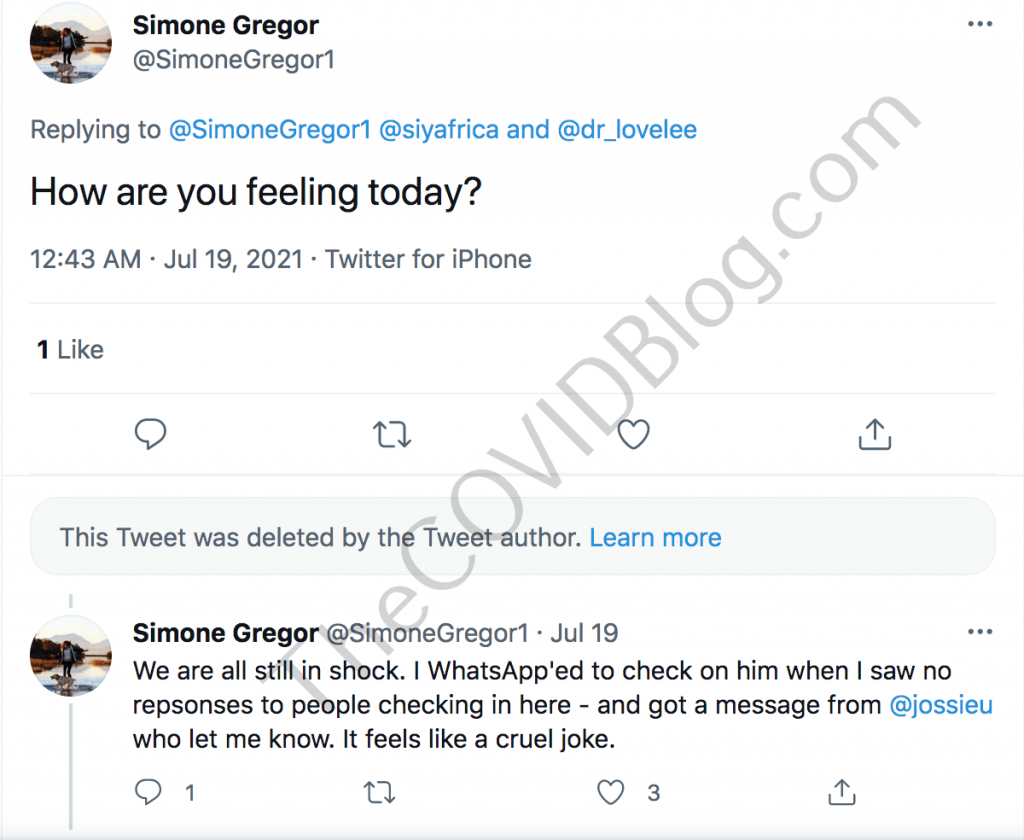 Who is Siyabonga Africa?

The word Siyabonga means “thank you” or “we thank you,” according to Names.org. Thus his full name literally means “thank you Africa.” He apparently is not affiliated with the non-profit organization Siyabonga Africa, which fights poverty in South Africa by providing food, jobs and resources for those in need.

Mr. Africa received degrees from Stellenbosch University (South Africa) and the University of Pretoria before earning his Master’s Degree in Telecommunications from Indiana University. He referred to himself as a “digital fundie.” He was a Senior Program Manager at Code For Africa, a data technology firm, at the time of his passing. The company described him as “a force for good, and passionate about using technology to better the lives of people across Africa.”

A Medium article written by someone at Code of Africa said the following:

Many of Siya’s friends pointed out how much Siya loved facts, and disliked conspiracy theories. As Siya said on social media, he was adamant about getting vaccinated. He would have hated his death being used for unsubstantiated speculation.

He did not have children.

The super-deadly, extinction level Delta COVID-19 variant has taken center stage ahead of the Beta variant, aka “South African variant,” in the country. Mainstream media said the Delta variant “took over” in South Africa, like how COVID-19 replaced influenza for marketing purposes.

Johnson & Johnson was the first experimental injection to arrive in South Africa, according to a government bulletin. The J&J shots are manufactured locally. Sinovac Coronavac and Pfizer are also available in the country. South Africa paused use of the AstraZeneca shots in March due to ineffectiveness. Pfizer recently signed an agreement with the Biovac Institute in Capetown. The latter will produce and distribute the experimental mRNA injections locally.

South Africa, like most of the Continent (except the island nations of Seychelles and Mauritius) have very low vaccination rates. But the COVID overlords are ramping up their attacks on Africa and forcing compliance and obedience to the COVID-vaccine agenda.

These near-instant post-vaxx deaths happen everyday. But most of them are nameless and faceless. Indonesia reported that 12 fully-vaccinated doctors died in June. Austrian media reported that upwards of 50 people collapse everyday in a Vienna vaccine center. Mainstream media simply brush these stories off as if they never happened.

Whether you live in an isimba (“hut”) in Kenya or a mansion in Beverly Hills, you cannot escape this global agenda. Only the strong and those who divest of mainstream media and big tech propaganda will survive. Stay vigilant and protect your friends and loved ones.

DUMBASS! Glad his spike proteins won’t be shedded onto me.

He is dumb for worshipping Dr. Fauci like a lot of liberals that took the Covid shot. Trust in God and not a TV or government doctor.

He would have hated his death being used for unsubstantiated speculation.

Yeah, like he died of natural causes as opposed to the thrill-kill shot.

Yeah! Oh, and, uh, he was sick before he got the vaccine too! And he hated conspiracy theories! (literally what the article said)

Lets hope some of his friends at least wake up. There is little wiggle room denying it was from anything but the poison jab with these quick deaths.

On his last day he said “go get the shot!”

Its like a guy as Katrina is getting underway saying, “buy some below sea level property in New Orleans”

Beyond mind-boggling. Way beyond.

“Mr. Africa encouraged another person to go get the mRNA injection that day as well.”

….I wonder what that other person is thinking now?

The notion that stupidity is harmless is one of the great normalized absurdities.

Stupidity is armed and extremely dangerous; especially when it is allowed to vote…

Only God is my Judge
Reply to  dddd

Well put! I was shocked to learn yesterday that in-laws had no idea that tech giants are suppressing people and info. It is a reminder of how powerful the suppression is. It’s one thing to be ignorant, but when people are presented information and they dismiss it out of hand, that’s stupid.

It is obvious the eugenicists were on to something….

“Three generations of imbeciles are enough”
___Oliver Wendell Holmes, Jr / commenting on the legitimacy of sterilization

I never thought genocide by mass suicide would be the way the planet would be de-populated; but what do I know…

I remember a meme there’s the irony that we find ourselves agreeing with the people running the control system more than we would like to admit.

At least if we buy the “broad is the road to destruction” narrative….

He never believed he could possibly die, did he? Unthinkable. If I couldn’t move 5m, I would be hysterical in an ambulance on way to a hospital. Our bodies are the temples of the Holy Spirit. What a dangerous way to treat it, with experimental drugs.

Only God is my Judge
Reply to  Kriss

Good point, and even if you were not spiritual, why would one so willingly experiment on themselves? Why not just pick a random mushroom or berry, eat it, and see what happens? Oh, that’s right, because it would be stupid.

Even if some experts told you: don’t worry, eat that mushroom, you can trust us – would you? Or would you perhaps wait and see, think on it, weigh risks/rewards, seek more info, etc? Nope! It’s all about not killing someone’s granny and caring about others. It’s about being in the cool, virtue signalling club.

Bad things happen when we care or worry too much about how others think of us. People that matter wouldn’t put you in such a position to sacrifice yourself in such a way.

Yeah, hit me in the head – again, please – yeah, that pain is starting to feel good.

If Fauci the Fraud got a real vaccine I’m an astronaut/brainsurgeion and all around genius. No way he got the shot. We said clamor for his blood to be tested for the spike protein.

Only God is my Judge
Reply to  joseph bono

I happen to agree with you, but if he did, he was immediately given a treatment or an antidote.

JoBono, Fauci the Fraud hasn’t gotten a real “vaccine” YET. Not YET. There’s always tomorrow. They will kill each other, these evil ones, it is inevitable. We will only have to stand by, watch, and clean up for a better, happier world.

Joseph well said, I’m still in shock people actually hold what that gnome says in high regards. A woman said to me, “Oh my I don’t trust that Fauci, he is so corrupt, but I got the shot anyway, he made some good points. Just in case, each of my family members took a different shot to be safe.” The mind control is real. Shut off the computers, throw away the phones and start reading books and NEVER CONSENT to this jab.

That’s great. Each took a different one so that they don’t all die. They don’t even realize they just admitted they don’t trust it.

Except they all will die because they’re all bad.