UPDATED MARCH 26, 2021 – We said at the end of this article to expect lockdowns, experimental shots, etc. in Tanzania now that President Magufuli was “reined in.” But they didn’t even wait until the body decayed. Via Bloomberg: “Most Mutated Covid-19 Variant Yet Found in Tanzania Travelers.”

DAR ES SALAAM — Former Tanzania President John Magufuli was perhaps the biggest enemy of the global COVID-19 agenda. He made headlines in May of 2020 when he openly questioned the legitimacy not only of the virus, but the PCR tests used to diagnose it.

President Magufuli secretly sent PCR samples that he had randomly assigned human names and ages to a Tanzanian lab. One test was from a goat. The other was from a paw paw, a fruit.

The goat and the fruit tested positive for COVID-19. The President responded, “something is happening.” He said that aid from foreign countries, including PCR tests, isn’t necessarily good for his country. The President was not basing this on conjecture.

Dr. Kary Mullis, the Nobel Prize-winning scientist who invented PCR, said in the 1990s that his invention is not for diagnosing viruses and other illnesses. Dr. Mullis suddenly died in August of 2019, right before COVID hit. The World Health Organization lowered cycle threshold recommendations for COVID-19 PCR testing in late January. Positive cases have dropped dramatically since the adjustment.

There is also the peer-reviewed manuscript by The Institute of Pure and Applied Knowledge (IPAK) and the Public Health Policy Initiative. It found that COVID-19 death numbers would be slashed by over 90% if the CDC used the same tabulation methods it used from 2003 to early 2020. The CDC also change its disclaimer on the Vaccine Adverse Event Reporting System (VAERS) website in June of 2019. The agency suddenly removed the part in the VAERS disclaimer that said it followed up on all adverse effect reports.

Tanzanians loved President Magufuli, who was first elected in 2015. He promised ending corruption and commit resourcees to the people of Tanzania, not corporate and foreign interests. The President won re-election last October with 84% of the vote. He cut his own salary by 75%, implemented construction programs to house the poorest people of the country, and invested funds seized through tax fraudsters into education and fighting poverty. President Magufuli swept the streets of Tanzania’s capital, Dar Es Salaam, with a broom to set an example for others.

The 61-year-old politician earned his bachelor’s, master’s and doctorate degrees in chemistry from the University of Dar Es Salaam. He has always been skeptical of foreign influences in his country. The PCR test debacle further emboldened him. President Magufuli said that Tanzanians should simply pray and eat healthy to fight what he perceived as a non-threat to his country.

President Magufuli questioned the legitimacy of all the COVID-19 mRNA, viral vector and other shot – and did not sugarcoat it.

Global media and the World Health Organization accused the President of “spreading disinformation and misinformation.”

The Guardian published an opinion piece on February 8 entitled, “It’s time for Africa to rein in Tanzania’s anti-vaxxer president.” It attempts to discredit and belittle the President for speaking against the mainstream COVID-19 and vaccine narratives. The Guardian published another article last October attempting to create a fraud narrative in Tanzania’s last election. “[President Magufuli] needs to be challenged openly and directly,” the Guardian declared on February 8.

The President went missing on February 27. Mainstream media created the narrative that President Magufuli was dying from COVID-19 after being a “COVID denier.” He died on March 17. Vice President Samia Suluhu Hassan was sworn in as President yesterday.

Mainstream media focused on Suhulu Hassan being the first female president of Tanzania. But several Twitter users quickly pointed out that she is an associate with the World Economic Forum. 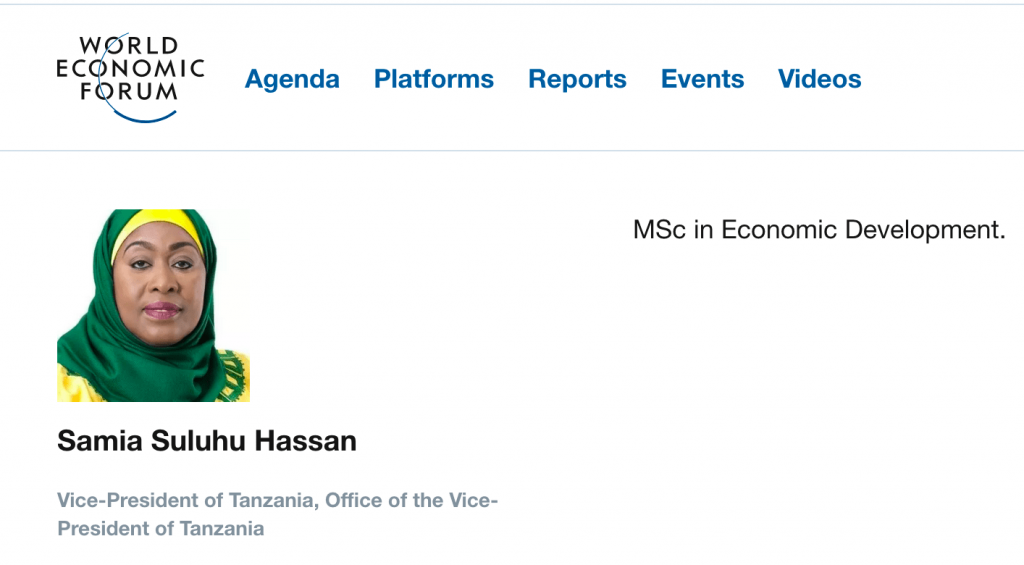 The World Economic Forum is a Switzerland-based NGO. German economist Klaus Schwab is the founder. He co-authored the book “COVID-19: The Great Reset,” published last summer. He is also the primary purveyor of the transhumanism agenda and the “fourth industrial revolution.”

That rabbit hole is not the subject of this article. Regardless, vaccines and lockdowns are sure to appear in Tanzania in the near future.

President Magufuli was a very brave man. He genuinely cared for the people of Tanzania by most accounts. A very objective thread on the popular Africa Facts Zone Twitter account tells you his best traits and faults. 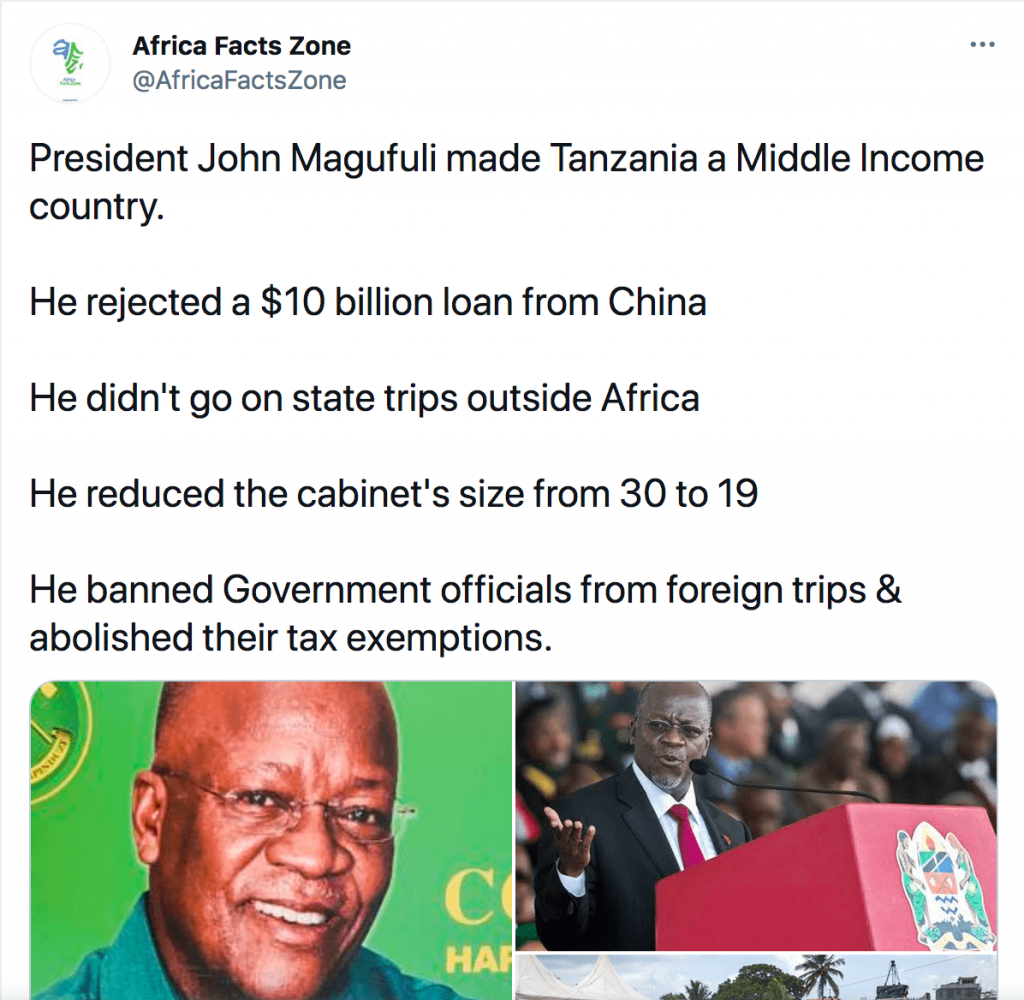 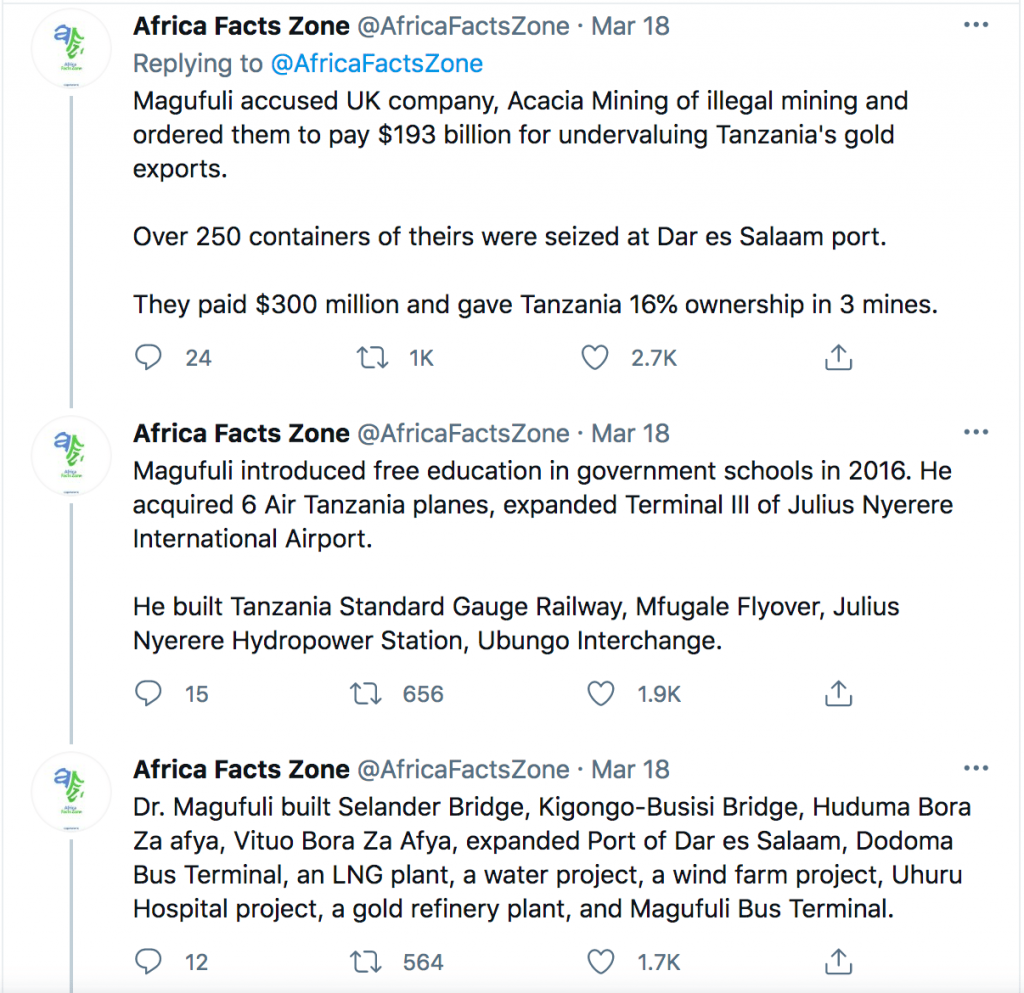 Unfortunately it is becoming clear that anyone challenging the mainstream narratives around experimental shots and COVID-19 will face some sort of repercussions.

The good news is that there are many positive developments in the United States. Iowa, Florida and Texas are fully reopened or never closed at all. In fact Iowa ranked #1 on a recent Wallethub study for states with the fewest COVID restrictions.

We get death threats daily and even see web traffic via analytics from the CDC, NIH and people we’ve written about on The COVID Blog. Nobody will ever know what really happened to President Magufuli. The timing and circumstances are odd. But we’ll leave it to you to decide what happened for yourselves.