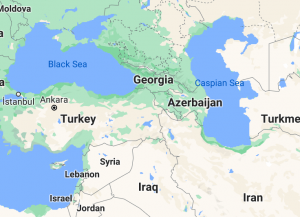 AKHALTSIKHE, GEORGIA — A 27-year-old nurse is dead in yet another death related to the experimental Oxford-AstraZeneca viral vector shots.

Georgia, a former Soviet Republic in the Caucuses Mountains, commenced its mass vaccination campaign on Monday, March 15. The AstraZeneca viral vector experimental shot is the only one available in Georgia. Nurse Megi Bakradze received the shot Thursday on camera in the town of Akhaltsikhe, according to state-run news platform Agenda.ge.

Afterwards she told the news outlet that the shots are necessary and everyone needs to get them. Things quickly deteriorated from there. Ms. Bakradze went into anaphylactic shock within an hour after the interview. Medical personnel transported her to the First University Clinic of Tbilisi State Medical University in the capital city of Georgia, 128 miles (207 kilometers) away.

Levan Ratiani, the clinic’s administrator, said at a press conference that doctors were able to restart her heart beating. But he also said her overall condition had not improved. Ms. Bakradze died shortly after the announcement, and less than 24 hours after the shot.

The Georgian Head of State took a page out of the American playbook. President Salome Zurabishvili received the AstraZeneca shot on camera around the same time Ms. Bakradze received the shot.

During the production, she said that the only way to end the “pandemic” is for everyone to get the shots. Georgia received 43,000 doses of experimental AstraZeneca shots on March 13. Several countries around the world suspended use of the AstraZeneca shots due to blood clotting, deaths and other adverse effects. But the European Medicines Agency is now saying that the AstraZeneca shots are “safe” and that the benefits outweigh the risks.

Dr. Bidzina Kulumbegov, a Georgian government COVID-19 advisor, sounded definitive in his assessment. He told Spanish newspaper Heraldo de Aragón, “we can affirm, in a preliminary way, that what happened is the result of a severe allergic reaction to the vaccination.” But he said “experts” will have the final say in determining the cause of death for Ms. Bakradze. Georgian government officials asked the Georgian Orthodox Church to encourage people to get the shots. It declined.

Censorship in USA and Europe

There is mounting evidence that the AstraZeneca shots are dangerous and should be permanently pulled from the global market. Italian prosecutors are exploring criminal charges related to deaths and adverse reactions to the experimental AstraZeneca shots. Unfortunately the status quo is likely to remain in place as the global media marrative remains the same. Thus it is up to individual to stay vigilant.

I believe that the TRUTH about these — ” So-Called ”– ( Safe Vaccine Shots ) are being suppressed soooooo much that the truth about the overall outcome of these ”Vaccine Shots” is NOT being made known to the – ”overall public” – not just ‘Nation Wide’, BUT, needs to go ”Globally”.

No matter what, the TRUTH, (( THIS TRUTH )) of what is actually going on behind the scenes and being suppressed by the — ”Main Stream Media” — IS and HAS GOT TO GET OUT TO THE ”GLOBAL PUBLIC” — WHICH WILL EXPLODE — IN EVERY DIRECTION ACROSS THE GLOBE. ”IGNITING” AN OUTRAGE ON A SCALE THAT THESE ”CULPRITS” — THE GATES’S, THE TURNERS, THE SOROS’S, AND MANY OTHERS BEHIND THE SCENES OF WHOM WE DO NOT KNOW THEIR NAMES — HAVE NOT, NOR COULD THEY HAVE COMPREHENDED THE MOST FIREY OUTRAGE AGAINST THEM FOR WHAT THEY HAVE DONE. And their wealth will not afford them a ‘Safe Place’ for them to – HIDE.

This is sooooooo criminal on a scale that has got to be – so unprecedented – that the DEATH PENALTY for these criminals to be handed by any court in the world would be deemed — too kind — of a sentence for any of these criminals. I would want a sentence of something way worse than death for these criminals, God help us, my heart is just too broken for what Pfizer is doing, Johnson & Johnson is doing, and what Moderna is doing; sacrificing a multitude of thousands and thousands of people for WHAT. What was the reason for letting and causing ALL of these people to have to ”DIE”. And as you can see from reading their written articles, FROM all over the ”Globe”, that there was ”No Reason” for why these people had to die, NONE.

According to our own FDA standards on a regular basis; just the inkling of a possibility that there could be a – death – from one of these ”so-called”, safe (( vaccines )), would prevent any of these ”vaccines” from having any chance of being doled out to the public. But, in this case, what happened, was the FDA bought out and sold to the highest bidder??? Did the safety of the public have no precedence in the FDA standard of operations??? I don’t know, but I would like to know and I bet a multitude of hundreds of thousands of people would like to know also.