We received a message from a Jamaican-American reader named Mona. Jamaican educators are actually dying at a similar rate to Canadian doctors. At least eight Jamaican teachers and principals died in an eight-day stretch back in May.

The report, again courtesy of the only publication in Jamaica paying attention, The Observer, said there was one more unnamed teacher who died. Thus, at least 11 total educators have died in the country since May.

Jamaica Prime Minister Andrew Holness is, without question, the most loyal, die-hard vaxx zealot of all Caribbean premiers. He posted the proverbial “I got my vaccine” photos for all three of his alleged AstraZeneca viral vector DNA injections (despite some Jamaicans suggesting all of said photo-ops were staged). 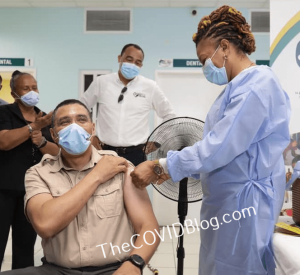 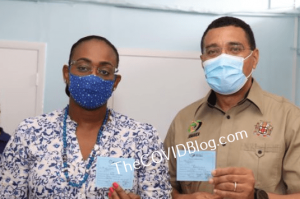 Holness posted photos of his two young sons receiving Pfizer mRNA injections in August 2021; and encouraged all Jamaican kids ages 12 and up to receive the lethal injections. 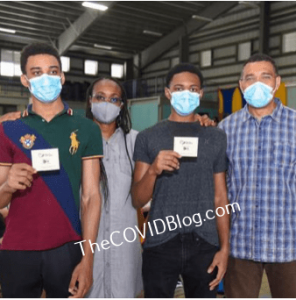 He provides perpetual free advertising for Pfizer and AstraZeneca, the two most commonly administered injections in the country. 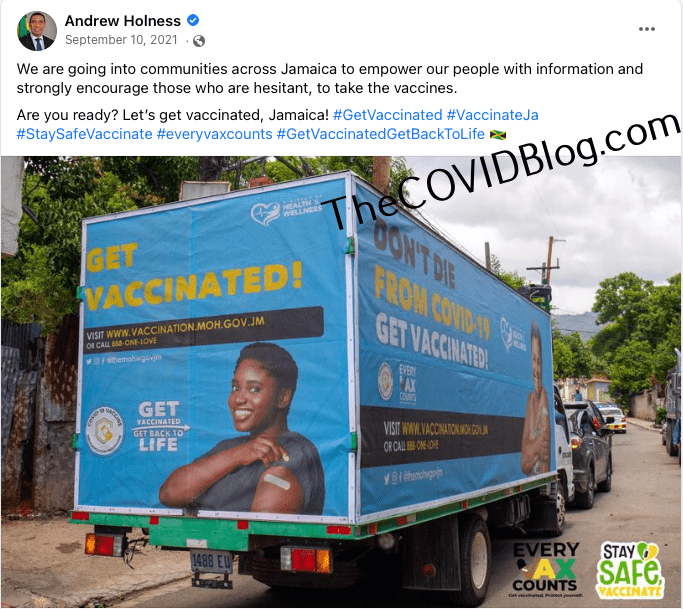 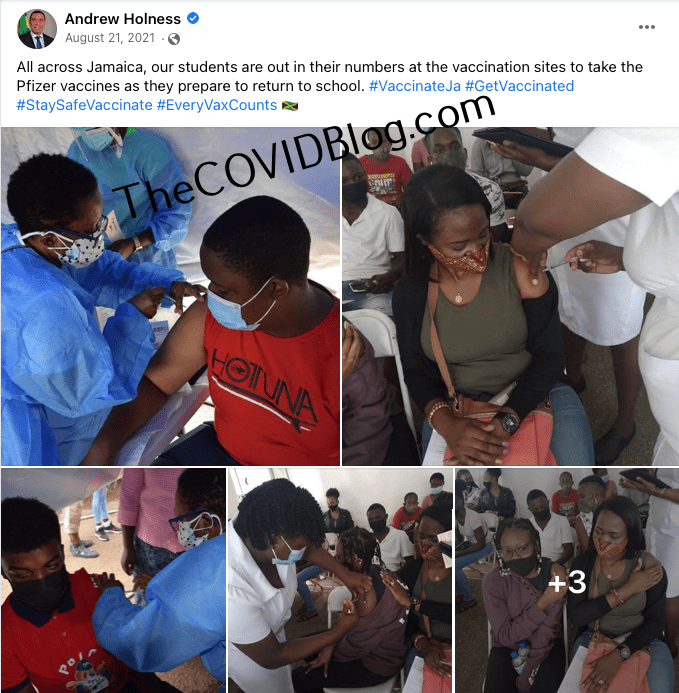 Like with everything on Earth, all you must do is follow the money to understand who and what Prime Minister Holness is. 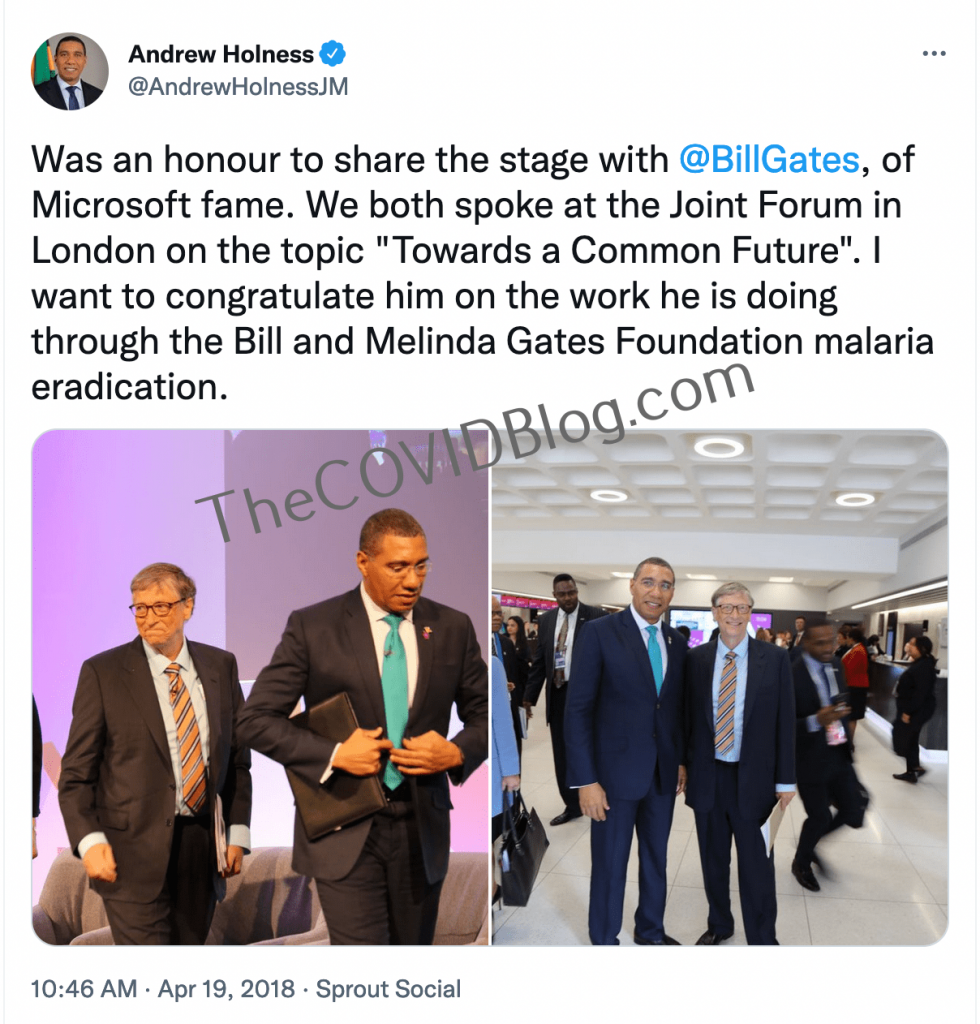 The Bill and Melinda Gates Foundation gave the Jamaica Library Board $2 million in 2013. The purpose of the grant was to “enrich lives and ultimately contribute to the achievement of the country’s Vision 2030.” Holness, who was the country’s opposition leader and education spokesman at the time, praised Bill Gates for the money. It’s safe to assume a large chunk of said funds went straight to Holness, who became Prime Minister three years later. And that’s not all.

The 77th U.N. General Assembly in New York conclude on Monday. Kamina Johnson Smith is the Minister of Foreign Affairs and Trade in the Holness cabinet. She used her time at the U.N. for kissing up to World Health Organization Director-General Tedros Adhanom Ghebreyesus… 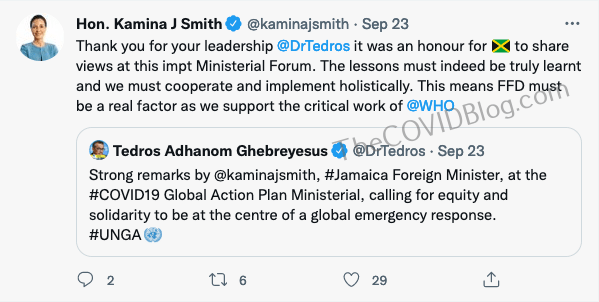 …and praising India for providing the first lethal injections to Jamaica in March 2021.

Despite all the foregoing propaganda, Jamaica remains one of the lowest vaccinated countries on the planet. Only 30% of Jamaicans have received at least one injection, with 26% “fully vaccinated.” Only 1.5% have received boosters, according to U.S. News and World Report. But Jamaican teachers receive injections at much higher rates. At least 60% of Jamaican teachers were fully vaccinated by February 1, according to U.N. data. That number has likely grown since then.

Coincidences are the new normal in 2022. But the leading cause is very likely the culprit herein. 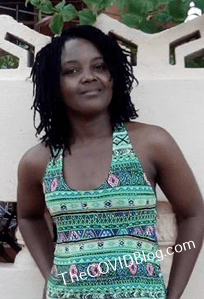 Ms. Desrene Steer was a third grade teacher at Braeton Primary and Infant School in Portmore. She had been with the school for 10 years. Ms. Steer had a normal day at work on Thursday, September 15. But “she wasn’t feeling well” the next morning. Family members drove her to the hospital. She died before they arrived. 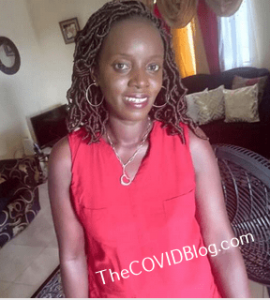 Ms. Deidre-Ann Rashida Campbell was a history and sociology teacher at St. Jago High School in Spanish Town, about 20 miles west of Kingston. It was first established in 1744, making it one of the oldest schools in the Western Hemisphere. Ms. Campbell was originally from the Sherwood Forest District in Portland Parish.

She saw a doctor on Wednesday, September 14 after waking up feeling ill. Doctors diagnosed her with gastroenteritis, aka “stomach flu.” It has a mortality rate of 1.5 per 100,000 cases worldwide. Four days later, on September 18, Ms. Campbell’s son found her dead next to her bed. 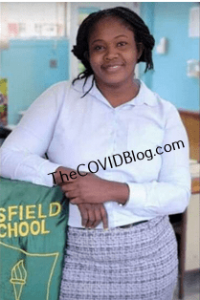 Ms. Charmaine James worked at Petersfield High School in Westmoreland. She reportedly worked there for 30 years. Details are scant. But Ms. James “died suddenly” at a local hospital on Sunday, September 18.

If a tree falls in a forest…

Hats off to the Jamaica Observer. The daily newspaper will celebrate its 30th anniversary this coming March. Somehow it is the only publication in Jamaica and/or anywhere else in the world to deem three teachers dying suddenly in three days newsworthy enough to cover. We’ve written several stories like this, with very similar themes.

Three Ohio judges died suddenly in a nine-day span last fall. It was even more newsworthy because judges in said state had been sentencing probationers to either receive the injections or go to prison. Three young soccers players in Germany were diagnosed with testicular cancer in a three-month span. We’ve long lost count of how many Canadian doctors have died suddenly since July, when the country authorized second booster shots for all adults.

The powers-that-be cannot rely on mass vaccine deaths in Jamaica due to low uptake. HAARP droughts, hurricanes, and subsequent famine are the depopulation methods for that country. Prime Minister Holness is fully controlled by Bill Gates, which spells disaster for the Jamaican people.

Peter Tosh said, “You can fool some people sometimes, but you can’t fool all the people all the time.”

Jamaicans haven’t fallen for the “vaccine” propaganda in large numbers. But now is a good time to get up and stand up for what’s to come by 2030 in your country. Stay vigilant and protect your friends and loved ones.

Mr Holness, I am glad you were so proud to share the stage with Mr Gates. If you don’t repent of your ways, you will likely be spending eternity in his proximity.

No, he will will not exist to spend anything anywhere. Just like every other living thing on the planet. How many of the religious are not really fighting because they think the perpertrators will spend the rest of time in, er, ‘hell’. TPTB love religion (for the masses, not for them), that was one reason why.

I can assure you that I am standing strong, sir. I try to help who I can.
You are welcome to have your beliefs, but you have no better concrete proof than what I have, so I would appreciate your reciprocation.

It’s strange how many doctors are dying in Canada. I know many doctors are dying worldwide, but why are Canadian numbers much more pronounced? Better reporting in Canada than elsewhere? I don’t think they are anymore more fanatical about the vaxx than doctors elsewhere. (Could be tho) Maybe they were lied to about what was injected into them. Thought they were simply getting saline or sucrose. TPTB may have decide that with the pre-planned genocide these doctors are no longer needed. Cost cutting efforts by the Canadian government to reduce severance packages. I just find this very strange.

Canada doctors took 4 shots, others less!!! But others are dying too, dont worry, just takes a little bit longer

It could be that the location that jabs doctors has a better freezer that protects the lethal-potency of the vaxxes. If handled incorrectly, kept too warm, the CDC warns that the vaxxes will lose their potency. We of course hope our loved ones got the vaxxes in sloppy places with cheap refrigerators.

I didn’t know Canadian doctors were dying in greater numbers. Prehaps other countries are padding and hiding stats better. Also, I’m noticed that people here are getting really sick, but not die… even though some (given the level of pain and angish at their choice to take that poison) say they wish they had.

I want that “nurse” to move her hand to see that needle in his arm.

Mother used to say “bad things come in threes”. You mentioned three teachers, three judges, three soccer players at the end of the story. We are going to see quite a few multiples of threes soon one fears.

Just found out that one of my clients has bells palsy after the vax, he is a hardcore covidian, said to me, can you believe that people are saying it is from the vax, I just smile, there is no helping him, unfortunately will probably be dead soon.

No surprises here. More people are dying and the media simply says they were dealing with a short illness. Truth is the vaccine destroys your immune system and makes any underlying illness worse until it kills you. This is in addition to the damage done by blood clots.

We have a detox system not an immune system

Well done, Jamaica for not falling for the scam in huge numbers, well done! I also hope the uptake is higher in eldery. I know how it sounds, yet, at this point the most important is to be a little objective. THis was the first time the Humanity sacrificed the young people to save the eldery and the sick. This is not the answer, children should be first to be protected at all cost. This is how humanity survived.
And now they care coming after the children with so many vaccines (not just covid).
We should reject all vaccinations, chiuldren are left infertile and with other diseases because of their vaccination schedule in young age!

Brian, I have prayed that you are safe and sound. Thanks for coming back :>

Ah yes. The educated. As in the indoctrinated so called intellectuals by the establishment. The type of people who think they are smart by remembering the perceived correct response on the test because schools will not entertain supporting critical thinking.

It’s no wonder this category of people are more likely to trust the experts.

I am done trying to reach out to the #ABV crowd. I know and you know but denial runs deep. If they want to believe they are intellectually superior to me then I will go along with it. The least I can do for them for the rest of their shorten lifetime.

I asked a commenter at The Observer if his friend was vaxxed and boosted and the Discus filter flagged my comment for moderation. You can’t even ask now.

The simpletons who interpret everything in the world by “divide and conquer” had better try to wrap their tiny minds around the following:
The worst “divide and conquer” is society being continually fractured and torn apart into smaller and smaller pieces by every form of sexual and gender insanity. No national cohesion built upon family units can withstand such continuous offensive attack. It is deliberate sexual warfare against any kind of stable social framework, sheer mindless license pretending to be freedom.

We no longer have a nation, we only have a state. The two are not the same. The former has been deliberately destroyed by the forces of woke leftism and globalism. Which means that the latter must be totalitarian and authoritarian in order to have any chance of holding such a fractured excuse for society together. Bottom up has been destroyed, top down is now everything.

Holness knows damn well he nor his family took any of those shots! Shame on them for lying and encouraging genocide!

Am very glad to read Jamaicans are not being deceived en masse. It seems they are sending the most deadly batches to that country.

Those teachers are fit and look heathy. I’ve had many Jamaican friends and have been to Jamaica twice. Jamaicans are a very health conscious bunch who consume LOTS of fruits and veggies naturally in their diet (they have tasty food) and physical fitness is encouraged – this why that country produces so many top athletes.

No way those teachers are dropping like flies. 40 year olds don’t just die. I am sure the jab is tied to their jobs.