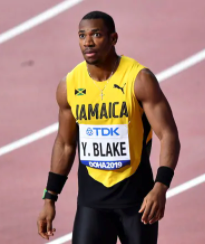 KINGSTON, JAMAICA — Bell’s Palsy, anaphylaxis, seizures and death are some of the most common results of getting mRNA and viral vector shots. An Olympic sprinter is not going to risk his well-being for it.

Yohan Blake is the second-fastest man in the world behind Usain Bolt. Blake competed in one of eight qualifying events arranged by the Jamaica Athletics Administrative Association last week. The 31-year-old sprinter made headlines at the event, but not for his performance. Blake declared that his health is more important than the 2020 Summer Olympics in Tokyo this coming July.

Blake told the Jamaica Gleaner, “My mind still stays strong, I don’t want the vaccine.” The International Olympic Committee (IOC) has provided ambiguous directions related to its position on the experimental shots and the upcoming games. The IOC said shots aren’t required for athletes to participate. But Olympic committees should try and get as many athletes as possible inoculated before arriving in Tokyo.

Blake: “I have my reasons”

The 2020 Summer Olympics were postponed for an entire year due to COVID-19 restrictions. The games are scheduled to take place in late July and early August, 2021.

“I would rather miss the Olympics than take the vaccine,” Blake said. Fellow Jamaican sprinter Asafa Powell seems resigned to his fate if the shots are required. “I may not have a choice” if I want to compete, he told the Gleaner. Blake won the silver in both the 100 meter and 200 meter competition at the 2012 London Summer Olympics. Bolt took the gold in both. Both Blake and Bolt were part of Jamaica’s 4×100 meter relay teams that took gold in the 2012 London Games and the 2016 Summer Olympics in Rio de Janeiro.

Blake is not the only high-profile athlete shunning experimental injections. NBA superstar Lebron James provided a non-answer when asked directly if he plans on getting one of the shots. “That’s a conversation my family and I will have,” he told the Los Angeles Times. “Keep that to a private thing,” he said. Sports media pounced on James, with one NBA writer calling James’ response “a really bad look.”

Clinical trials are expected to continue through 2022 and 2023 for the Pfizer, Moderna and Johnson & Johnson shots. All recipients of these shots are volunteering for clinical trial research. Many people across the globe are refusing to be uncompensated lab rats for experimental shots.

Good for them. This reminds me of something I have lived by since my eldest son was a baby. (He had congenital heart deformities). A paediatrician was trying to convince me to consent for him to be vaccinated. Which having researched it, I was against. So, …. When someone tells you or tries to convince you to do something that you, in your heart, do not agree with, and do not want to do. Here is a suggested reply. ‘If I do what I believe is best in this situation, having done my own research, and it all goes horribly wrong. I will be able to live with that, as hard as it will be, because I did what I believed to be right, given the information I had at the time. If, however, I do what you want me to do, against my own judgement and it all goes horribly wrong, how do I then live with that? The person trying to convince you, cannot support a reply and they will end the discussion. The paediatrician replied to me, ‘ok we will agree not to discuss the subject again’.

Totally agree with you. Our eldest son was born with a serious heart defect too and endured 3 open heart surgeries. My identical twin sister’s son is much younger and is autistic after receiving his vaccines. The Dtap at birth caused convulsions, then the rest made it worse before he was diagnosed. He’s 21 now and who will look after him when we’re gone? She has to live with her decision to let him get further vaccines like the MMR. Noone should be pressured into being given a medical procedure against their will, nor punished for not having it.