GOWRIE JUNCTION, QUEENSLAND — A 23-year-old Australia woman is dead, and her mother is not buying the alleged cause of death – and neither are we.

Ms. Caitlin Gotze worked for Hatch Racing, a race horse operation in Glenvale. She’d been with the organization since early 2019, and held the title of stable foreman since April 2021, according to the Toowoomba Chronicle (link blocked by paywall). A stable foreman is responsible for day-to-day care of the horses, including feeding, monitoring health, and grooming. They also mentor and supervise other staff. It’s unclear if Hatch Racing mandated the shots.

Ms. Gotze received her first Pfizer mRNA injection on or around September 7, according to her mother, Mrs. Raelene Gotze (aka Raelene Kennedy). Raelene said Caitlin fell “really ill” after the shot, to the point that she was bedridden for a week. Caitlin returned to work the following week, putting in 60 hours to make up for the lost time. Despite what sounds like a severe adverse reaction to the first shot, Caitlin received the second Pfizer injection on September 28.

She either fought through subsequent adverse effects for several weeks, or experienced none. Ms. Gotze seems to really love her job and horses, so it’s likely she went to work at far less than 100% during that time.

Ms. Gotze was out with her friends on Saturday, November 13. She suffered a “severe asthma attack” that day. Ms. Gotze drove herself to the hospital. Doctors prescribed antibiotics, steroids and more/different inhalers. Ms. Gotze went to her regular doctor the following Monday, November 15. He told her to simply continue the protocols prescribed by the hospital doctor. There’s no indication that her regular doctor performed any further tests.

After another day of rest, Ms. Gotze returned to work on Tuesday, November 16. She apparently got through the day without issue. But on Wednesday, November 17, she had another alleged asthma attack while at work. Ms. Gotze went to her car to retrieve her inhalers. Her co-workers got worried when she didn’t return to the stables after several minutes. They went to check on Ms. Gotze and found her unresponsive in her car. Co-workers performed CPR until paramedics arrived. But it was too late. Ms. Gotze passed away that day.

Raelene is not fully convinced that an asthma attack killed her daughter. “I am seriously wondering if the Pfizer vaccine stopped her heart,” she wrote. Mrs. Gotze also said that preliminary findings indicated “no typical asthma presentation.” She once again said, “Pfizer is the suspicion but will have results next week.” 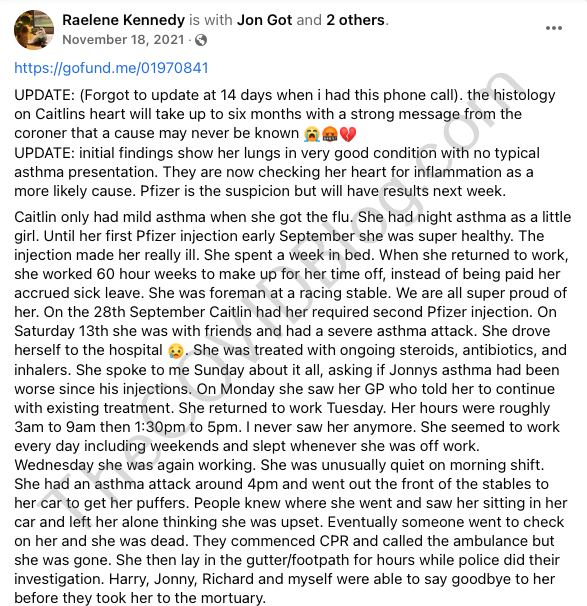 Mrs. Gotze is not going to allow her daughter to die in vain. She’s been continually posting information about post-injection myocarditis since Caitlin’s death. 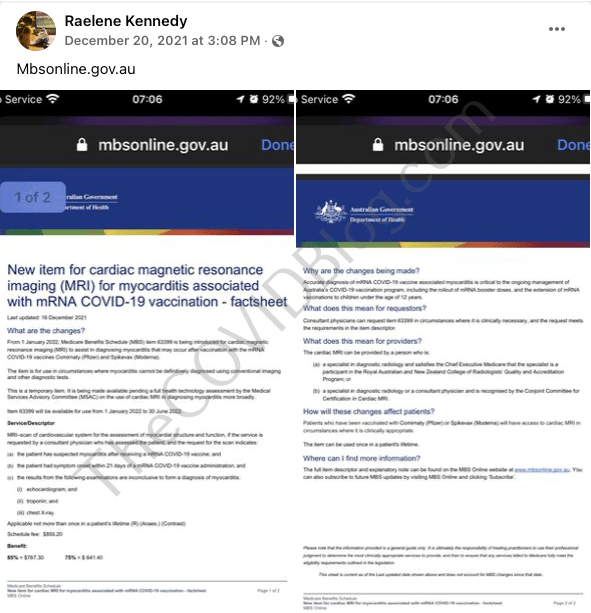 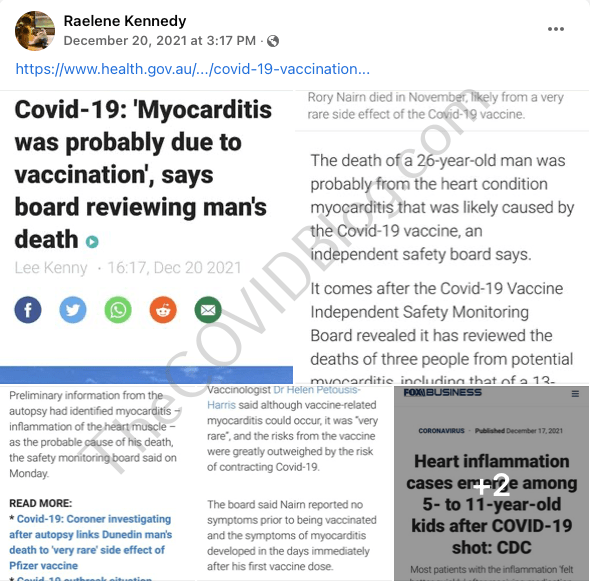 She also pointed out that the consent forms for the mRNA injections mention nothing about potential death. 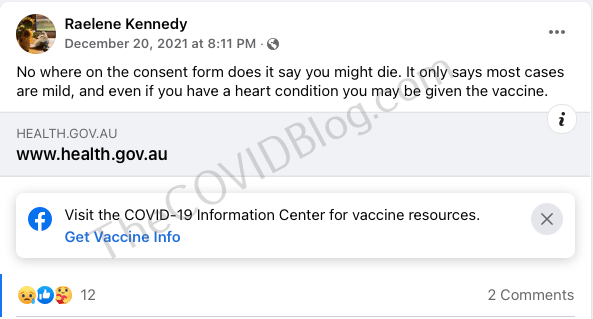 Mrs. Gotze is now wondering how Pfizer gets away with calling these injections “safe and effective.” She is also pointing fingers at the doctors who failed to run any additional tests. 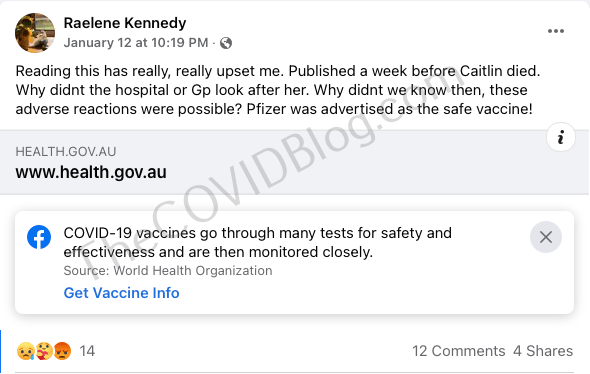 A GoFundMe page is collecting funds in Caitlin’s memory.

Cutting through the B.S.

Ms. Gotze did not die of an asthma attack. That is a cop-out by Australian medical authorities and makes absolutely no sense based on what we know.

This blogger had asthma as a child (just like Ms. Gotze), and had to carry around an inhaler. But after around age 10, it went away. Granted people develop and heal in different ways. But there’s been no signs of asthma ever since. Further, only about 3,500 Americans die of asthma per year, according to the American College of Allergy, Asthma and Immunology. Of those deaths, half are people over age 65. Assuming similar numbers in Australia, Ms. Gotze would have to be one of the most unlucky people in the world to die of a “natural” asthma attack. Now a post-injection asthma attack – that’s a different story.

Ms. Gotze was experiencing shortness of breath and difficulty breathing – essentially synonymous with an asthma attack. A simple search for “shortness of breath” on this blog finds 12 stories of vaxx-injured people reporting said symptom. Five of the 12 (42%) were ultimately diagnosed with pericarditis after the appropriate tests were done. Four others had blood clots and/or brain aneurysms. You’d think doctors would know signs of blood clots and heart inflammation better than a blogger would. Ms. Gotze also had a severe adverse reaction to the first shot and should have been exempted from the second. But I digress.

We don’t know for certain if the foregoing two children received the injections. We also don’t know what exactly caused Ms. Gotze’s death, and likely never will. But 2 + 2 = 4 today, and will still equal 4 in six months when Queensland authorities file their official autopsy results.

Yeah, sure. Notice how in the first update, her mother had been told heart results would be returned next week. Then she was told it could take 6 months – you know, after the doctor checked with his bosses at Pfizer.

It’s so sad to see how Heartbroken these families are. Her poor mother!!!-

If they had discernment, critical thinking, and a healthy distrust of the Sorcerers at Big pharma…it would not have come to this…

What a horrible way to go, and at only 23. She had a kind face. Hopefully the mother/family/friends will not be so docile and accepting of the situation when the “authorities” continue to ignore/stonewall/lie after 6 months.

It’s really insane how they are pressuring people there. They almost could face prison?, which seems so ridiculous with barely a handful of active cases in her entire area?! And a healthy 23-year-old is NOT at great risk, anywhere. But, now she IS Dead. Tragic.

How long before Australia doesn’t exist anymore? I wonder why they are hitting Australia so hard? Because they can? Location? Natural resources?

Isolated island nation, so the people are trapped, and extremely low ownership of private firearms.
New Zealand is in the same shape.
Don’t let yourself feel too bad for them though, a majority of the people actually are in favor of the way things are going there.

I have to agree that they are ok with what is happening. I mean don’t sit back and watch them build the camp your going to get dragged into or think its ok my neighbor is getting sent there as long as its not me. The time for them to stand up and fight has unfortunately passed.

They are letting this kind of tripe be written and doing little about it:

Dr Chant said of the 22 men and 14 women who died, 33 (out of 36) were vaccinated, although those who were vaccinated had “generally” not received a booster shot.
Three were aged under 65 – including one in their 40s – and two of these were not vaccinated. All three had “underlying serious health conditions”, Dr Chant said.
Sydney Morning Herald, 1/18/22

So 32 of 33 were over age 65, jabbed, and still died.
Of the other 3, all had other serious health issues. Two of them may have be age 64, and the other one could have been age 49 – again, with serious health issues.
But yeah, lets jab all those teens in major risk.
I have seen a young lady literally dragged by her throat by an officer for not properly wearing a mask in public and hesitating when the officer told her that, and I saw a 70 year old lady pushed flat on her back on the road, then sprayed with a foaming agent while she was in that position by two different officers. All 3 of these officers are very identifiable on the videos, and yet they have not even been publicized, much less admonished in any way from my very active viewing of 3 different websites. If people are not crying out against these disgusting displays of excessive force, then I can only assume that most people thought it was acceptable.

So yeah, my post above should have said most of the people THERE (in Australia) are accepting of it, not were people have common sense and are able to view from a distance. I am glad to see there is pockets of resistance there, and I think the Joker had to make some people think a little bit, but only time will tell.

As a horseman this hurts. Why get the 2nd when the 1st made you so ill? RIP lovely young lady.

This update did not end well. She went from vaccine adverse effect to dead weeks after. She was not smart enough to not take a second shot. People seem to not get the memo. If the first shot makes you sick or you get an adverse effect don’t take the second shot. Unfortunately so many people think vaccines are the best thing since slice bread that they will keep taking shots until they die. The insanity will never stop. Also there are folks that think the adverse effect are a sign that the vaccine is working. Having a fever, body aches, chills, etc. is totally normal after the shot.

Yes your body is shaking uncontrollably, your heart lining is inflamed, you have major brain fog, feel like your dying….YEP its working alright!!! Please sir may I have another?

“Having a fever, body aches, chills, etc. is totally normal after the shot.” That people believe that also baffles me. You have that reaction because you’ve poisoned, not protected.

Wake up people, they are trying to kill us all!