GREEN BAY — A 40-year-old music teacher is dead four days after publishing a Facebook photo wearing a mask and holding an “I was vaccinated” sticker.

Wisconsin educators became “eligible” for experimental mRNA and viral vector shots on March 1, according to the state’s Department of Health Services. Ms. Sara Holub received one of the experimental shots at the Kress Events Center, University of Wisconsin Green Bay, on March 22.

It is unclear whether she received a Pfizer or Moderna mRNA shot, or the Johnson & Johnson viral vector shot. Ms. Holub received the shot via Prevea Health. The organization is holding mass inoculation events across the state. It received its allocation of experimental shots for educators on March 16. Prevea is affiliated with the nonprofit Hospital Sisters Health System.

The company spoke about people’s “diligence and excitement” to receive the experimental shots on March 22. 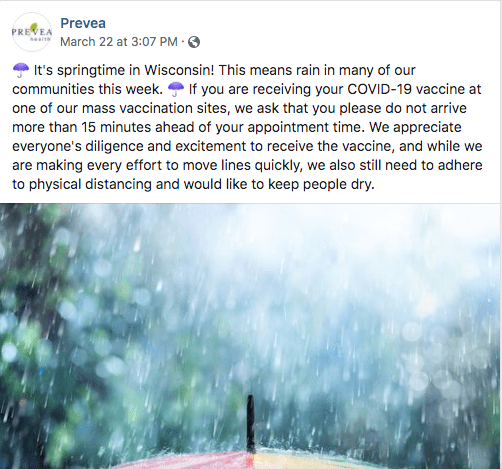 Ms. Holub was one of those people. She posted that day on Facebook, “it’s been a ridiculous year, but better days are coming.” She proudly and publicly conveyed her excitement to the world. 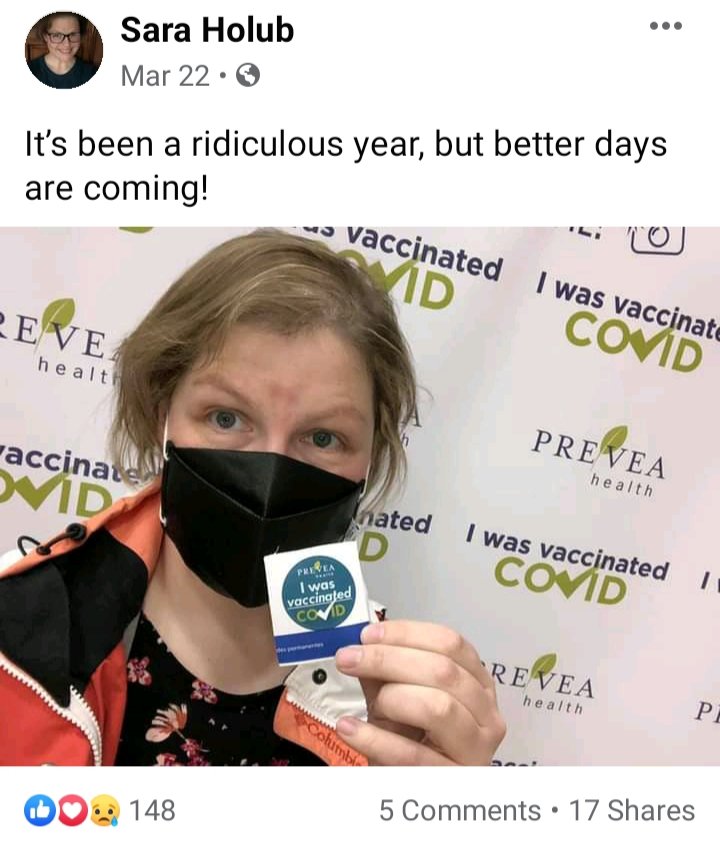 Ms. Holub died four days later, according to her obituary. 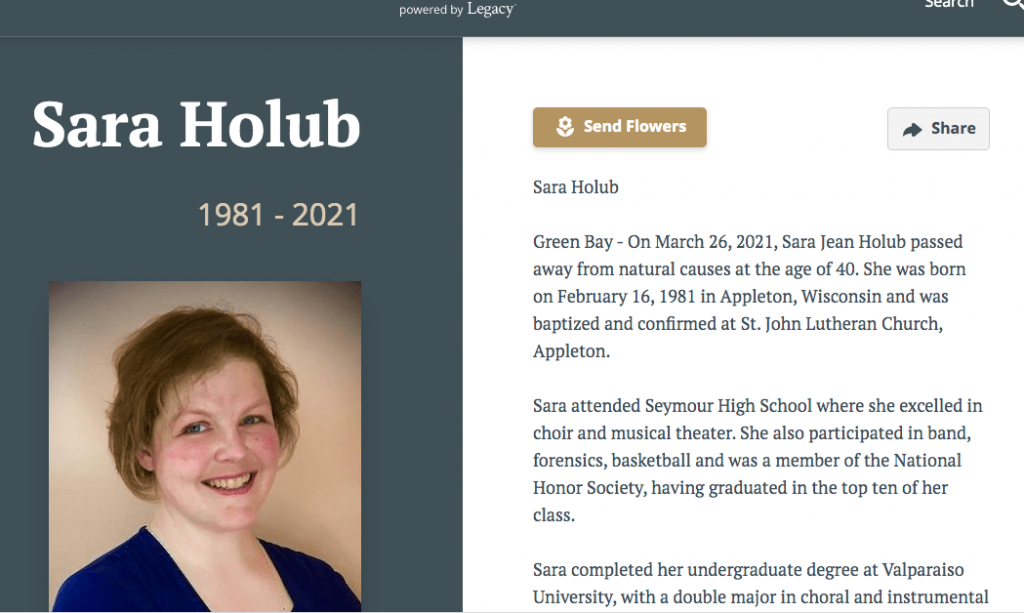 The Facebook “vaccinated” post has since been removed from her timeline. As we’ve covered extensively, “vaccines are the leading cause of coincidences.” Ms. Holub’s obituary says she died of natural causes. Of course there is no mainstream media coverage of her death. And even if there were, it would entail canned talking points, starting with “her death is not related to the shot.”

Ms. Holub was a music teacher at JR Gerrits Middle School and Pulaski Middle School in Kimberly, Wisconsin. She fulfilled a lifelong dream of being a contestant on Jeopardy!. 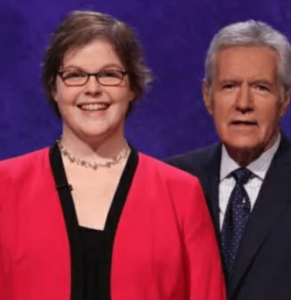 She is survived by both her mother and father. Ms. Holub’s funeral is today at 10 a.m., Fox Valley Lutheran High School Auditorium in Appleton.

It would be really nice if we never had to cover these stories again. But people continually take these Facebook “vaccine photos” and end up dead or injured days, hours and sometimes minutes later. Ms. Holub is yet another example of an educated person who fell victim to this very concentrated, very powerful, psychological conditioning campaign.

All of these shots are still in clinical trials. You are an unpaid volunteer for clinical research when you receive these shots. Nobody knows the long-term effects. But we definitely know the short-term effects. Stay vigilant, keep spreading truth, and protect your friends and loved ones.

vaccine is an IQ test

I will cut my eyelids off with a rusty knife before I allow an experimental drug to be injected into me produced by companies that have paid $7 Billion in fines over the last 20 years for fraud, bribery and racketeering.

You are mistaken those pharmaceutical murder centers aren’t paying the fines, the taxpayers are. Our benevolent congress and Ronald Reagan gave the va((ine killers immunity from liabilupity. Wasn’t that so nice of them? 🙄

I hate auto correct when I’m in a hurry.

Zoe, it seems Linda’s referring to fines handed down by courts for crimes drug makers were convicted of, like in the case of Vioxx. And it seems you’re referring to vaccine court.

She was a semifinalist on Jeopardy!

These People are Evil and will Sacrifice anyone to get their Agenda Meet. Something big is Afoot, what Exactly it is I’ve been running Many scenarios but can’t put my finger on it. Is there a Viral Bug going around. Sure it is. How Deadly…. No More Deadly then anything that will cause those vulnerable and susceptible to it. Now These Vaccine??? I can’t Say. I will say Healthy People,, Really need to ask yourself a lot of Questions. Me and Mine…Hell to the F NO!

The $omething big besides making billions from vaxx is the depopulation agenda. Wake up, it’s very real!

What do you do when you show these examples to a family member who’s signing up for the Jab & they respond, “that’s fake news.” ?? This isn’t a stupid person–I guess MSM has done their job. SMDH. Turns my stomach😨🤢🤯

Or how about the “when are you getting vaccinated” question, assuming you are getting one. I’ve decided the next time I’m asked this I will answer along the lines of “that’s my private information” (isn’t our medical info hippa protected?). What I’d really like to retort is, “when are you getting your colonoscopy?”, or something along that line.

If asked, I’d reply “When Hell freezes over!’
A friend just texted he’s so excited he ‘finally’ got approved for the Jab. I said “they’d have to drag me kicking & screaming to get one & I’d be trying to BITE them the whole way!!”
TBH, I’M TIRED of trying to be PC & nice about this. These people / sheeple are giddy & pompous at lining up for their slaughter & NOTHING gets THRU to them!!

How about the strange thing whereby people photograph themselves w/ a mask on? Talk about being under mind control, it makes me ill!

I find it difficult to understand how/why people have signed up to be guinea pigs, but as I often say, FEARMONGERING work$ every time!!!

It is disheartening to see so many buying into this crap. I fear the worst.

What would be ‘natural causes’ for a 40 year old to die from?!? They just can’t bring themselves to say the obvious, which means all who are behind this have NO concern for human life whatsoever. What’s the point of this ‘vaccine’ then? Obviously massive death.

I wonder if Ms. Holub had SLE (lupus.) She has the typical butterfly rash that many lupus patients get on their face. That would be an important data point for SLE sufferers to know about.

She was my daughter’s choir teacher at Preble High. VERY SAD

and what about autopsy? not allowed in US?

Autopsy? Why would you need an autopsy when she clearly died of natural causes at 40 years old? Are you some kind of conspiracy theorist?