SAINT-ANTOINE, NEW BRUNSWICK — Mr. Joshua Cassie and his fiancée, Ms. Stephanie Clair, have had an eventful last two years during the so-called pandemic. Their first baby girl was born on or around March 4, 2020, right before the world shut down. The family was blessed with a second baby girl in May 2021. Stephanie then proudly displayed her engagement ring for the world to see on January 21. 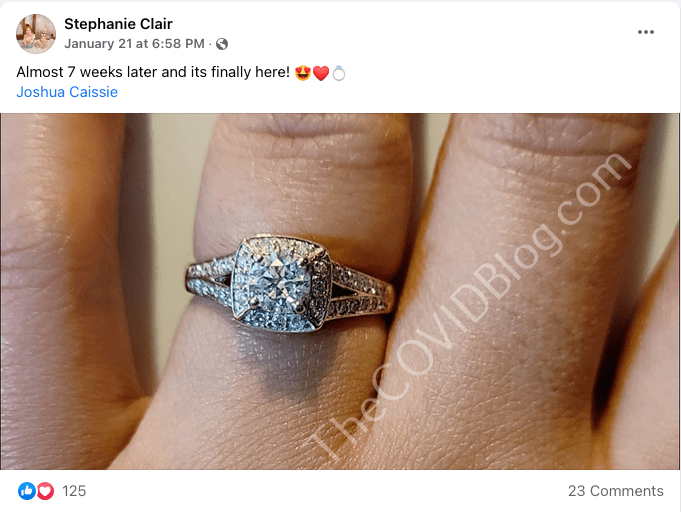 The young couple is living the Canadian version of the American dream – that is 21st century version thereof. Both dad and mom work to ensure their family has everything they need. But poison-filled syringes touch the realities of all working families across the globe in 2022.

We didn’t hear back from Ms. Clair as of publishing when we contacted her. But judging from the preponderance of evidence, both she and Mr. Caissie were late-game holdouts for the injections. Their two daughters look far too healthy and vibrant to be GMO babies, meaning both Mr. Caissie and Ms. Clair received no mRNA or viral vector DNA injections during the pregnancies.

Mr. Caissie posts infrequently on social media. Ms. Clair, however, is very active on Facebook. But at least 90% of her posts are about their two girls. The rest of her posts leave an unclear picture as to her post-pregnancy vaxx status.

A September 15, 2021 Facebook post says that Mr. Caissie cannot attend his youngest daughter’s baptism because he has no proof of “vaccination.” 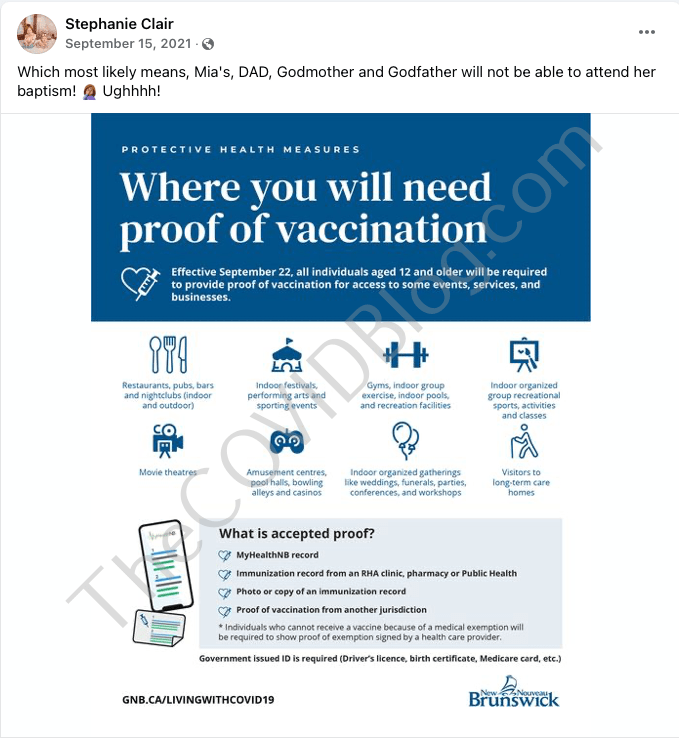 Three days later, Ms. Clair announced that the baptism was cancelled due to “mandatory vaccination.”

Ms. Clair asked her Facebook friends on September 19 if you needed a vaccine passport to enter Walmart, implying she does not have one.

Then on September 30, she announced that their baby girl was receiving “4 month vaccines” that morning.

Ms. Clair, on November 4, shared a Facebook Event page hosted by Mr. Caissie’s mother. The event required masks and injections to attend. So either they skipped the event or got their first shots beforehand. 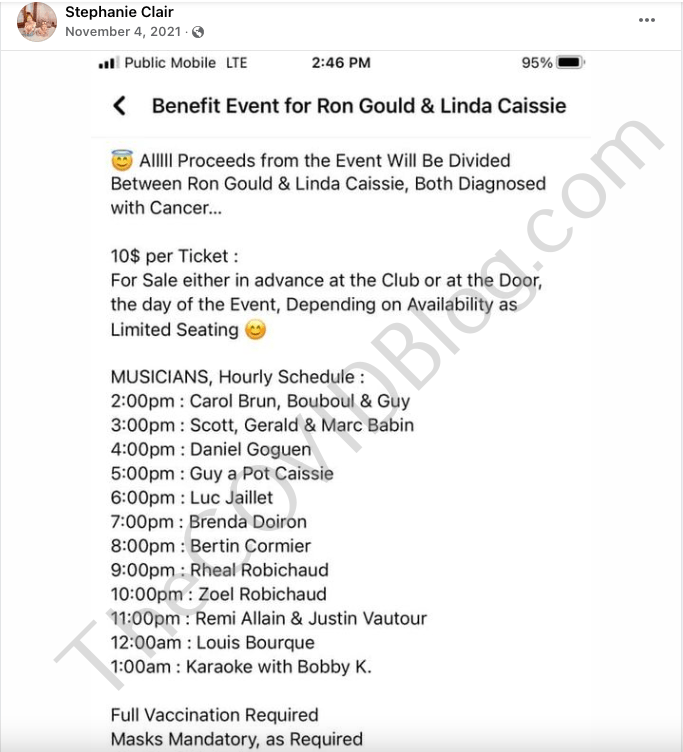 Two days later, on November 7, Ms. Clair wrote that she had a job interview.

New Brunswick has a vaccine mandate for all government employees and healthcare workers. Private sector employees must do “regular testing,” while patrons must be fully-vaccinated. Ms. Clair now works at a bar in Saint-Antoine. 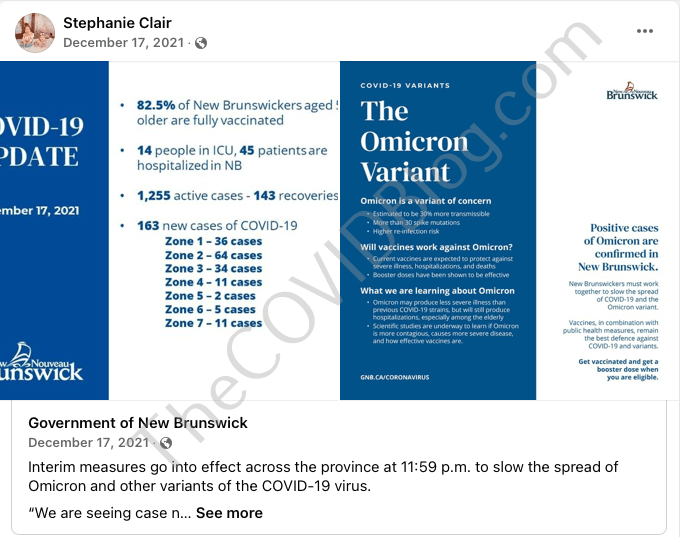 Despite all the vaccine noise, Ms. Clair posted another photo of her engagement ring on January 21. Everything was going so well for this young family. But apparently the squeeze from vaccine passports and perhaps mandatory employment vaccines got the best of them.

Ms. Clair first made public that something was wrong with their family on January 31. “For everyone who didn’t know, Josh took a minor heart attack last night,” she wrote. 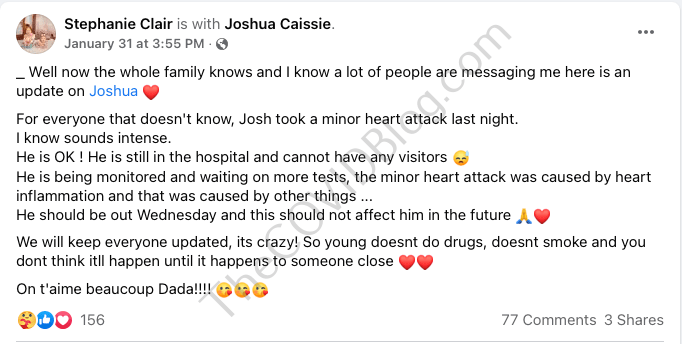 The heart attack was caused by “heart inflammation,” meaning myocarditis, which was caused by “other things,” she wrote. Ms. Clair believed Mr. Caissie would be home two days later. But the situation did not resolve itself as the family hoped. Mr. Caissie tried to reassure his family by posting a message to his oldest daughter on February 1. 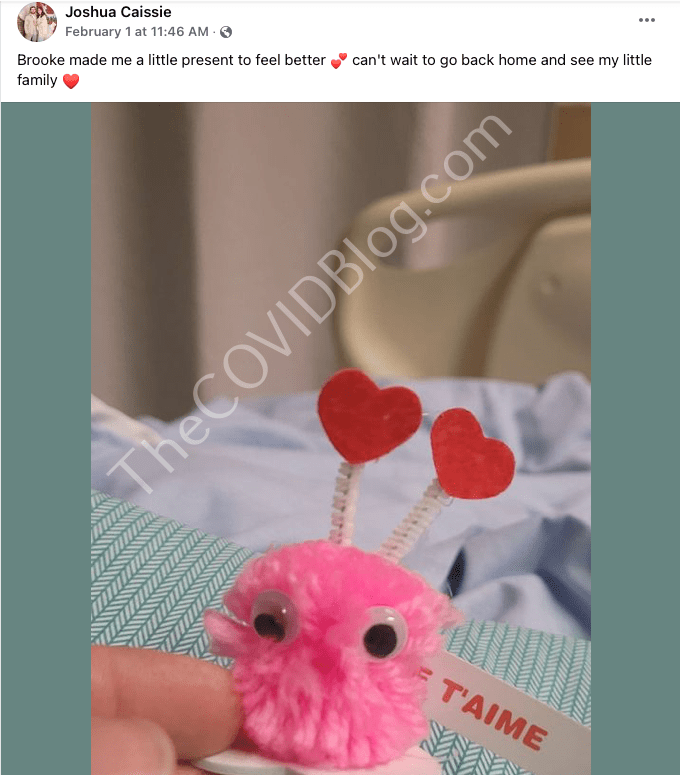 Ms. Clair said Mr. Caissie’s “heart enzymes went up” on February 2, and was thus not coming home yet.

Cardiac enzymes are sort of a “check engine light” for the heart. Elevated levels of cardiac enzymes mean a heart attack happened or is about to happen, according to The Cleveland Clinic. As long as levels stay elevated, the risk remains.

A few hours later, Ms. Clair said doctors made it official – that Mr. Caissie’s problems were caused by “this stupid vaxxin.”

It’s unclear when Mr. Caissie received the shot. He only posts on Facebook 3-4 times per month max, and usually far less than that. But his January 21 post mocked Pfizer and Moderna. 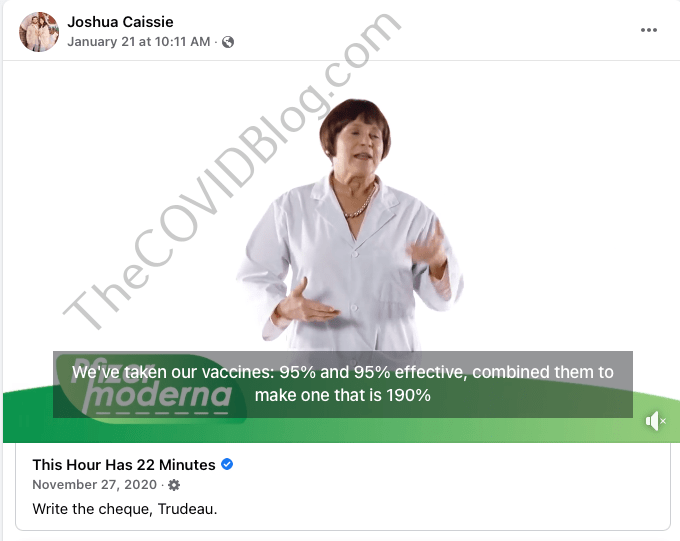 The post sounds like defiance and submission all in one. The foregoing is also his only post dating back to 2020 that references masks, vaccines or anything else COVID-19 related.

Ms. Clair posted another update on February 3, reporting that Mr. Caissie’s enzymes dropped. But he still could not be discharged.

The family got really excited on February 4 when they believed Mr. Caissie was coming on the next day. 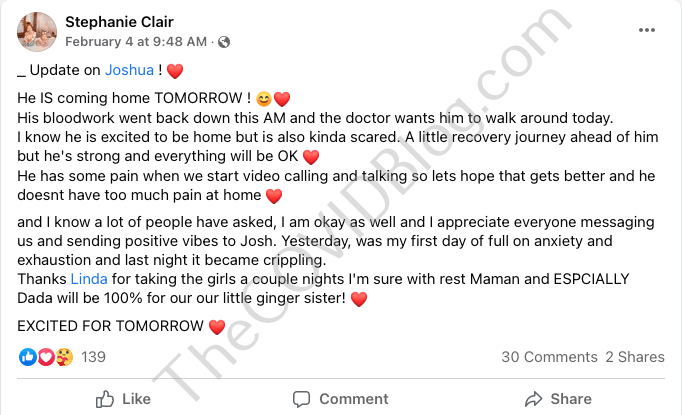 That also turned out to be a false alarm. Mr. Caissie’s heart enzymes leveled out the next day, but did not drop, meaning there were still issues.

Four days later, on February 8, Ms. Clair reported that Mr. Caissie’s heart enzymes were still on the rise. Doctors had no explanation for the situation.

The next day, February 9, an MRI showed inflammation in three parts of Mr. Caissie’s heart. Ms. Clair also conceded that their family life was unlikely to be the same for the foreseeable future even when Mr. Caissie comes home.

Mr. Caissie was discharged the next day, February 10.

But now he’s unable to work; and they don’t know when he’ll be able to work again.

We’ll update this story in due course.

The story of Stephanie Whitmore garnered a lot of attention here. She is the Australian woman who received mRNA injections in the final trimester of her pregnancy. Mrs. Whitmore’s baby was stillborn weeks later. But many readers were very interested in Dr. Colleen Farrell, who was also featured in the foregoing story.

Dr. Farrell is a virtue-signaling vaxx zealot who tweeted three times per day, minimum, prior to giving birth. She completely disappeared from Twitter for a month, until posting a photo of her newborn baby’s hand on January 23. She’s tweeted only three more times since that day, with none of them being about her baby. This is only a newsworthy matter because Dr. Farrell posted several pregnancy photos, but now keeps her baby private. Make of that what you will. But the reason this blogger believes Ms. Clair and Mr. Caissie were non-vaccinated for their daughters’ pregnancies is because both daughters look very healthy and happy.

Regardless, even if Mr. Caissie and Ms. Clair were against the mRNA and viral vector DNA injections, they are fine giving their babies other shots during this surreal COVID era. All indications are that they held out until the very last minute to receive the heart attack injections. And now their future is completely uncertain.

The only people still feeding this vaccine agenda are those addicted to booster shots and bad parents poisoning their kids. All Pfizer-free people in 2022 receiving a first injection now are just plain stupid. There’s no other way to say it.

“Dr. Farrell is a virtue-signaling vaxx zealot who tweeted three times per day, minimum, prior to giving birth. She completely disappeared from Twitter for a month, until posting a photo of her newborn baby’s hand on January 23. She’s tweeted only three more times since that day, with none of them being about her baby. This is only a newsworthy matter because Dr. Farrell posted several pregnancy photos, but now keeps her baby private. Make of that what you will.”

Yes, exactly. I was wondering when you would circle back to this. IMO, it is rather strange given her pattern of posting before to just have one brief mention in over a month. Also, how do we know it is even her hand or her baby’s? It could be some stock photo! Yeah, I am getting deep into conspiracy theory, but geez, after the last 2 years, can you blame me?

Doesn’t sound so much like a conspiracy theory any more.

Praying for that man and his family. Would hate to hear that those girls lost a parent 🙁

If he is THAt bad he will not make it. Maybe he will live a few more years, but heart doesn’t heal and it seems the damage is progressing actually. Sad, but crazy they still bring their beautiful daughters to take their shots when we know all the vaccines are bad actually, the ones they do now and many 100% unnecessary.

On the plus side very few people are receiving first injections anymore I think the line in the Sand got drawn. But it really become about prosecuting those responsible for this mass psyop to make sure it never happens again ..

Brian, you wrote: “The only people still feeding this vaccine agenda are those addicted to booster shots and bad parents poisoning their kids. All Pfizer-free people in 2022 receiving a first injection now are just plain stupid. There’s no other way to say it.”

Well I am absolutely stunned because of a situation that happened last month, in January 2022. Several months ago, I introduced this blog to a person in her 50s who is a teacher in New York City. She in turn shared it with our mutual friend, a retired teacher who also lives in NYC. She had been teaching remotely during the plandemic but was due to return to the classroom in late January. But in order to do so, she was required to get the shot. She’d been holding out for so long, and yet she ended up getting injected for fear of losing her job. Meanwhile, she knows about a dozen people who have either died or been injured from these shots.

Can anyone tell me how a person can read and share this blog, personally know of people who were adversely affected by the shots, and yet STILL go out and get injected, especially in 2022??? It’s unbelievable, and yet I guess it shouldn’t surprise me. Nothing surprises me these days.

They’ve had enough of life and are hoping the shot kills them, too. Same goes for those injured by the jab who keep going back for more.

Satan has always played on the fear of poverty and the fear of scarcity to sow mayhem and enemity among the human race.

When one does not firmly believe in the only God (Allah), God of abundance, generosity and forgiveness after repentance, one is prone to fall for the tactics and whisperings of Satan. One becomes a tool and a relay station for Satan.

Happened at work. I am surrounded by people who have bought the covid lies completely. I have not bothered to try and talk to them. Just encourage they take the booster. But one woman would talk to me about some health issues that suddenly popped up. And she confirmed her doctor said they were seeing a lot of these issues pop up too. So I gave her this blog and another site as well. Told her that there were a lot of issues from these shots but she needed to make up her own mind. About 2 weeks later I asked if she read any of the sites. She said she didn’t look and got the booster. She knew but doesn’t want to know. It requires too much self examination. Admitting they bought the lie and only God knows what else is going to happen to her and her family. They are lost causes.