NEWPORT, WALES — A 17-year-old Welsh girl is still hospitalized and promoting experimental injections despite the unquestioned cause of her condition.

Ms. Maisy Evans received her first experimental mRNA injection on August 11, according to her Twitter page. It is unclear which injection she received. But only Pfizer, Moderna and AstraZeneca are used in Wales. AstraZeneca is only being offered to people over age 40, according to Wales Online. Thus Ms. Evans received the Pfizer injection, which is the only one authorized in the U.K. for children under age 18.

General malaise kicked in on August 13. Headaches and muscle aches followed. Ms. Evans said she “tested positive” for COVID-19 on August 14 and has ran with that ever since. 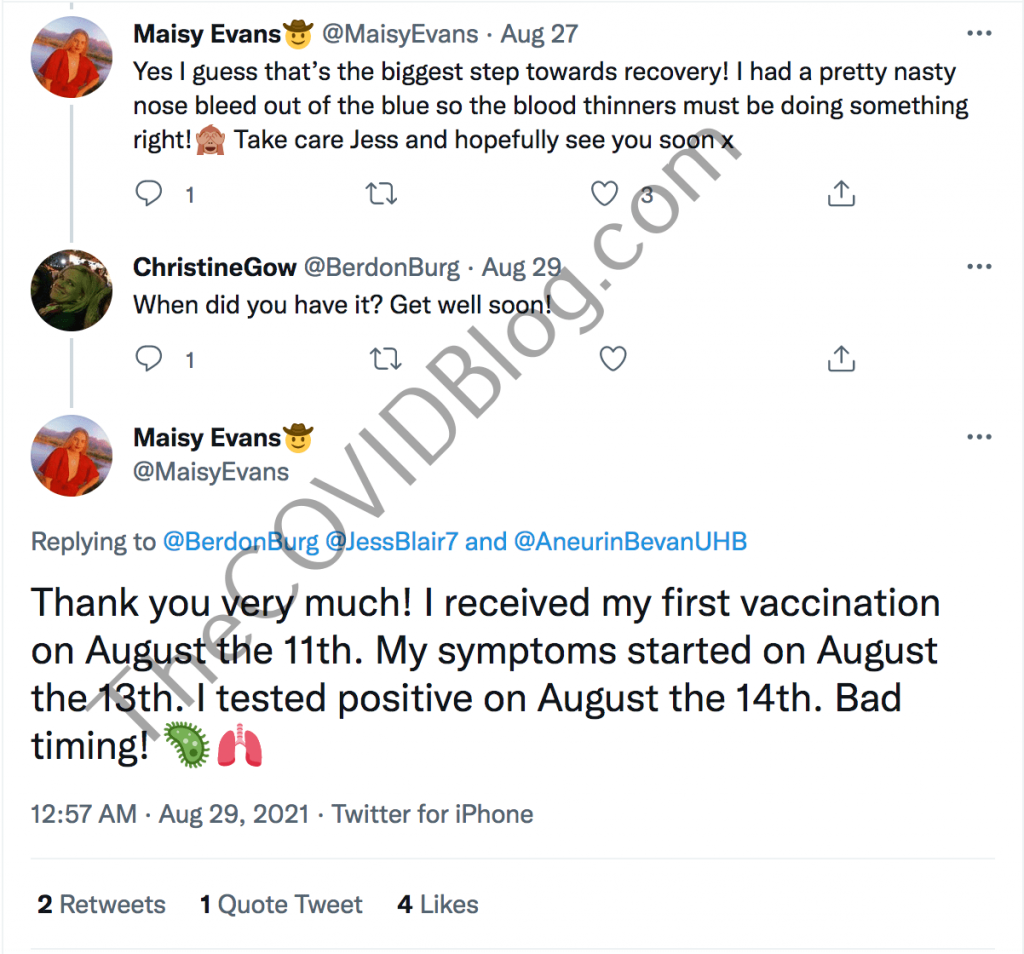 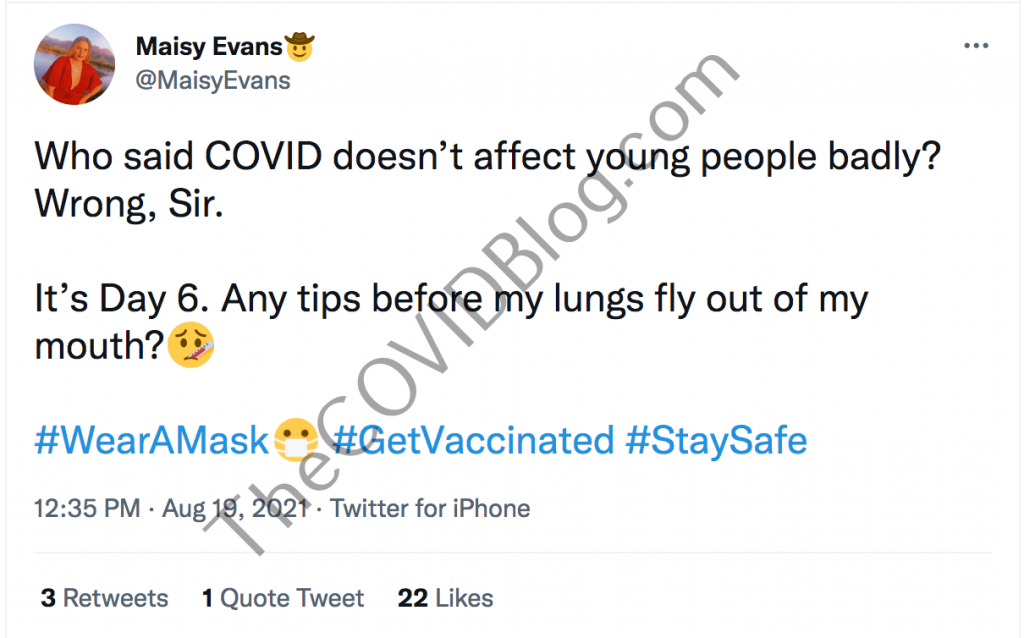 Her condition worsened until she was admitted to Grange University Hospital in Cwmbran on August 25.

Doctors first suspected sepsis or meningitis. But after X-rays, CT scans and blood tests, she was diagnosed with a blood clot in her lungs. Blood clots are common, known adverse effects from all of the experimental injections. Ms. Evans tweeted on August 27 that she would be in the hospital for a couple more days because she cannot “regulate [her own] oxygen levels.” She is taking blood thinners, steroids, morphine and antibiotics. 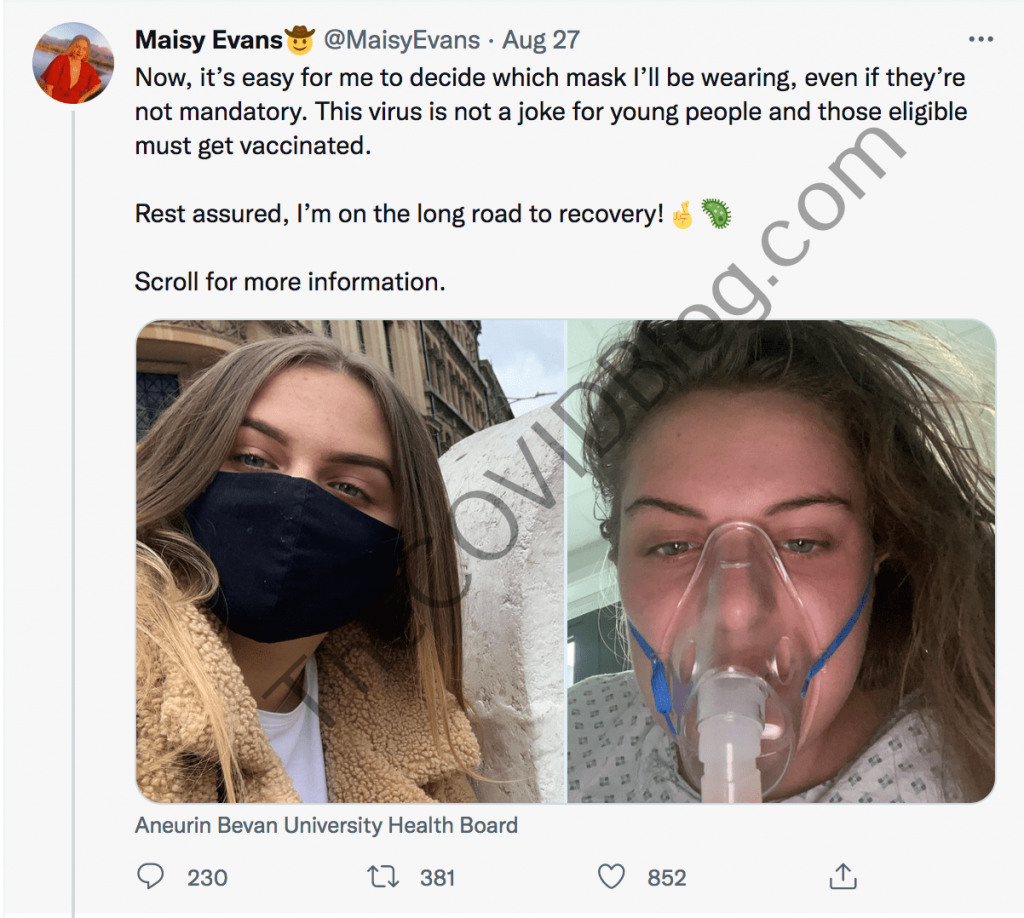 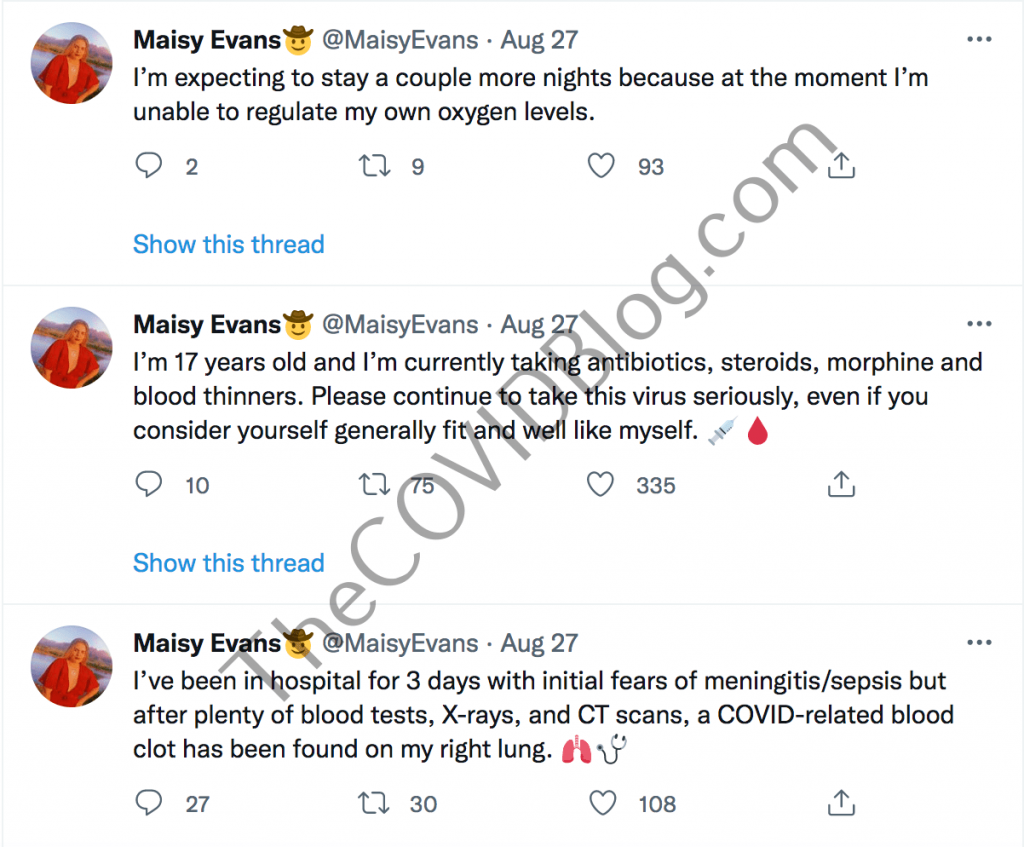 Ms. Evans continued blaming COVID-19 for her condition. Despite not getting sick in an 18-month so-called pandemic, then getting sick days after an mRNA injection, Ms. Evans wished she’d been offered the injection sooner.

As of writing this article, Ms. Evans’ last Twitter update was on August 30. She said something about “trolls” pointing out the obvious cause of her condition and being a “paid actor.” 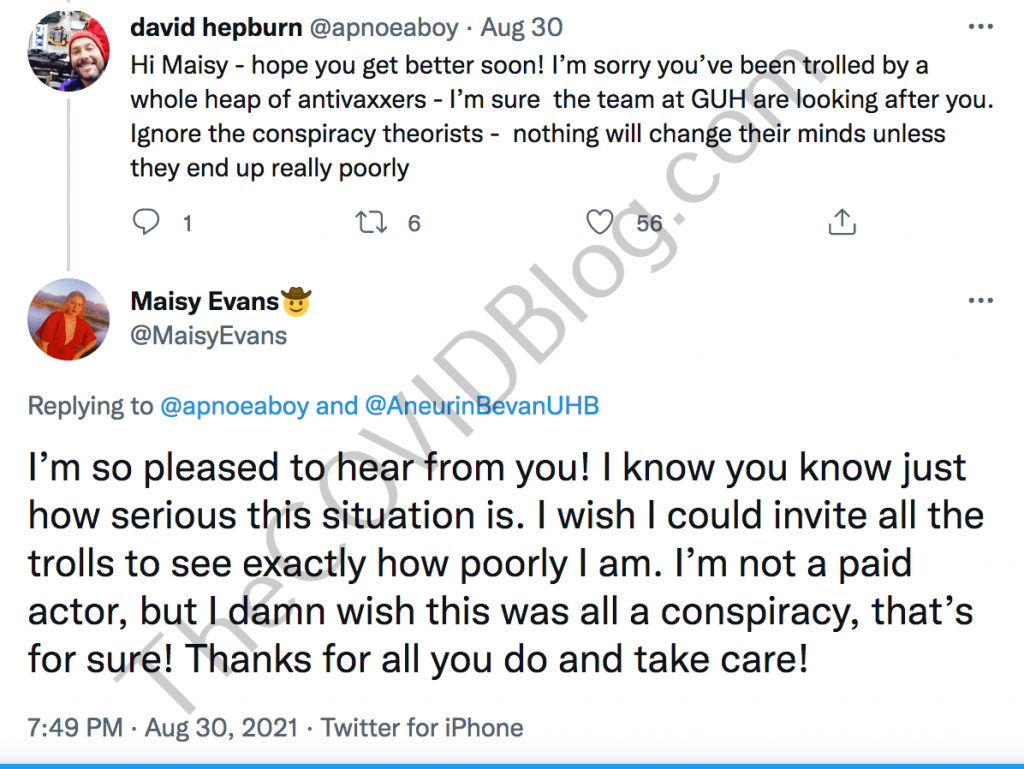 Ms. Evans was a member of the first Welsh Youth Parliament, thus called an MWYP, at age 14-15.  MWYPs serve two-year terms and are either elected or appointed. They are required to be nonpartisan. Ms. Evans represented the county borough of Torfaen. She said of her position:

I will strive to influence significant changes in Welsh policies, and improve the lives of all young people in Wales by lowering the voting age, try to improve school funding systems and focus on your health and well-being. Whether you are privileged or underprivileged, a boy or a girl, aged 11 or 17, Welsh-speaking or not, your lives are a priority for me and our country.

Ms. Evans also does a podcast called “Young, Female and Opinionated.” She told the BBC that she had no other health problems prior to August 11 and the Pfizer injection. But, she said, “I simply had a very bad experience of Covid-19.”

Getting to the youth early

Ms. Evans is obviously an ambitious young lady. She likely had a bright future ahead of her. She said “[COVID] is not a joke.” Well, neither are mRNA-induced blood clots in your lungs and potentially a lifetime of taking blood thinners.

Ms. Evans is obviously educated. But she unfortunately is a literal poster child for so-called pandemic indoctrination. This girl cannot even bring her brain to think critically about what happened to her. Generation Z, or Zoomers, have been raised by Instagram, TikTok and SnapChat. This generation has never known a world without smartphones, internet and text messaging. Thus reality is what they see on those little screens on those digital devices that serve as a fifth appendage for most Western youth.

The future looks bad for everyone as this “vaccine” agenda threatens to wipe out hundreds of millions of people in the next 2-3 years. And even if it doesn’t, anyone who receives these injections is likely sterilized and will not have the ability to procreate. Humanity is at a crossroads. Which side are you on? Stay vigilant and protect your friends and loved ones.

Sigh, 17yrs old and her intellectual capability is equivalent to two marbles rolling around in a tin can. Allow me to put it in a way that every member of the idiot generation can actually comprehend, #Dumbass #SocialMediaMoron #CattleToTheSlaughterHouse #UndeservingOfFreedomsPeopleFoughtFor.

I could say so much more, but, what’s the point?

John McClane you are spot on.

So many hashtags so little time.

Spot on,,,,,,,at this stage of the game, “What’s the point?” is the only attitude to have to keep from going off the deep end over these Harry-Potter-generation ignoramuses.

When the vaccine was first coming out Fauci touted it by saying that it would prevent the worse symptoms.. My question at the time was “what are these worse symptoms (outside of death) and how do you know what they are for a novel virus? Months later he stated vaccines have been known to cause the infection or exacerbation of the infection you’re trying to treat and that’s the worse case scenario.
In years if people’s organs go septic or they develop meningitis, kidney failure or brain tumors will people suspect the obvious cause or be like this young lady and practice willful ignorance?

Most will never know what really hit them, as was the case with Fauci’s prior victims of AZT, another witch’s brew he pushed thru in the 80s for another phantom disease called HIV/AIDS. As a matter of fact, the crowd who are carrying on the traditions of these victims sing songs of worship to this cretin who calls himself a doctor.

So true! I researched Fauci re HIV, AIDS. Fauci aquired multiple HIV patents in early 80s, and continued to do so over the years, including Covid. Fauci involved in big pharma creating AZT and pushing it on HIV positive patients, where it quickly caused the AIDS epidemic, world wide whilst he & drug companies profited wildly. Today, we see Fauci at it again…holding WAY too much authority & control to renew funding for SARS/Covid Gain of Function/GoF, Cleaving properties by totally circumventing notifications for shared scientific input, approvals, etc., that were set up after BO defunded this R&D at Chapell Hill in 2014, citing research as too dangerous. Fauci’s galactic conflict of interests should be thoroughly scrutinized, following patents, money, Gates, pharma, his scientists in Wuhan Level 3 & 4 bioweapons’ labs, CCP’s Dr. Shi Z., who at Chappel Hill published white papers, lectured, bragged about dvlpmts of new SARS virus w/GoF, Cleaving including HIV added properties! Ive read it. Seen video of her lecturing to colleages.

WHY ARENT OUR ELECTED SENATORS GETTING TO BOTTOM OF THIS & EXPOSING IT NOW? Senator Robert Kenny Jr. gets the whole deliberate depopulation agenda, NWO…he’s been diligently shouting it from rooftops for some time now. Senator Rand Paul SHOULD have, minimally, arrested Fauci for perjury, after he lied straightfaced during recent congessional hearing re any knowledge of, involvement in GoF research. BS!

Listen, if I can data mine & put 2 + 2 together the past 18 months, so can our Senators! They each pledged an oath to Serve & Protect the PEOPLE. THANK GOD TENS OF MILLIONS, WORLD WIDE, ARE AWAKE & THEIR EYES WIDE OPEN…NOT WOKE SHEEPLE.

Please share this website forum with others. Educate. Resist. Defend Your Freedom from Medical Tyranny, Suicide. God Bless All.

Thank You The Covid Blog for all yuur documentation…I have spent several hundred hours researching the agenda and the dangers of these Bio Weapons…. and I’m glad I found your blog, about real world accounts to articulate all this…Many people are seeing it on my end The Propaganda and Cult are powerful…most Sheeple are fully invested in the system…

It is easy to fool someone but much harder to convince them they have been fooled.

And this is the crux of the matter. Shame is the most uncomfortable emotion. Admitting you were duped is so painful. Admitting your government wants you dead is paradigm shattering. Definitely not for the faint of heart. They’ll die to avoid an uncomfortable truth.

How could she be so stupid and tell people to get the clot shot? I just don’t get it

“I will strive to influence significant changes in Welsh policies, and improve the lives of all young people in Wales by lowering the voting age”
___subject of article
>>>>

Maybe we can lower it to right when they come out of the womb? Would that sufficiently “empower” y’all?

The word “suffrage” is made up of “suffering” and “rage”. And this is no coincidence.

Democracy; like equality; is a Very Bad Thing; even though it “sounds” good.

The concepts looks good…if you don’t look too close.

You can improve the critical thinking skills of all young people by homeschooling. And limit and vet their screen time. Then they won’t end up as clueless as this poor child.

There’s a very good cognitive reason teenagers aren’t allowed to do much of anything in society, but now they’re being held up as gods and sages? MMMMMM KAY.

Because our brains are broken until mid 20’s.

Well on the bright side she has taken herself out of the gene pool.

She didn’t hear the song “…we don’t want another hero…” ?. She aspires to be like the “Greta Thunberg” of con-vid. Good girl….YAAAWWWNNNN….

Keep that mask on honey! That will solve all your problems.

Unbelievable. My husband in his upper 40s and a bit overweight tested positive for covid last November. He had a bad cold but recovered. Who knows if he actually had covid. Nobody else in our family got sick, including me —-his wife. I didn’t get tested—-Nobody else in our home did. His job made him get tested because of his cold symptoms. He didn’t suffer a blood clot. But this healthy, young 17 year old thinks it’s more plausible she got a blood clot from a cold virus than an experimental shot with side effects that have been known to cause blood clots? Maybe it’s a blessing now that she won’t be able to procreate. Sorry.

At this point… I’m not opposed to culling the herd bc the herd has been told repeatedly they are putting their lives at risk. Survival of the fittest in full form. The heads of this snake should be very afraid, bc those of us awake are coming with both barrels blazing when all is said and done.

At this point everyone is a few clicks away even with censorship to finding out alternative information.

That is if you have a brain that doesn’t blindly trust and keeps coming back to the problem to keep dissecting it rather than accepting the first round of answers you get at face value. This thinking feature doesn’t seem to exist with people these days and its not just with young people.

I’ve said before and will say it again!…. RESISTANCE TO GETTING VACCINATED..IS OBIDIENCE TO GOD!!! ALL OUR DNA BELONGS TO HIM!!