NEW YORK — Brooklyn defense attorney and television commentator Midwin Charles is dead after what appears to be several days of suffering after receiving at least one experimental shot.

The tweet is still live as of publishing. It is also archived. Her next tweet jokes about her “death causing peanut allergy” and that her insurance did not cover the EpiPen costs. 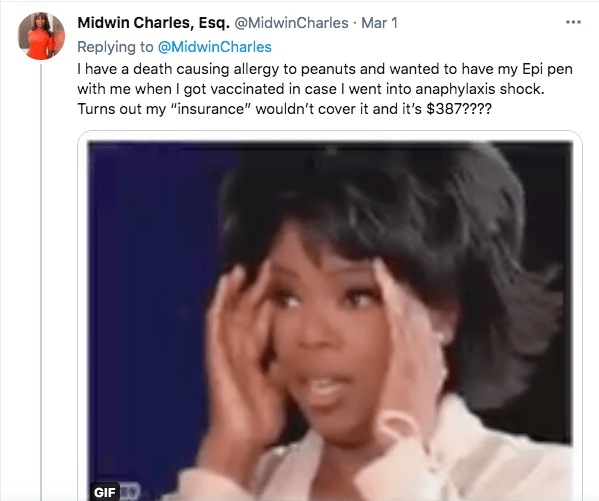 She then retweeted a North Carolina professor talking about “black vax hesitancy.” An analysis of her tweet activity thereafter indicates that her health started deteriorating three weeks later. 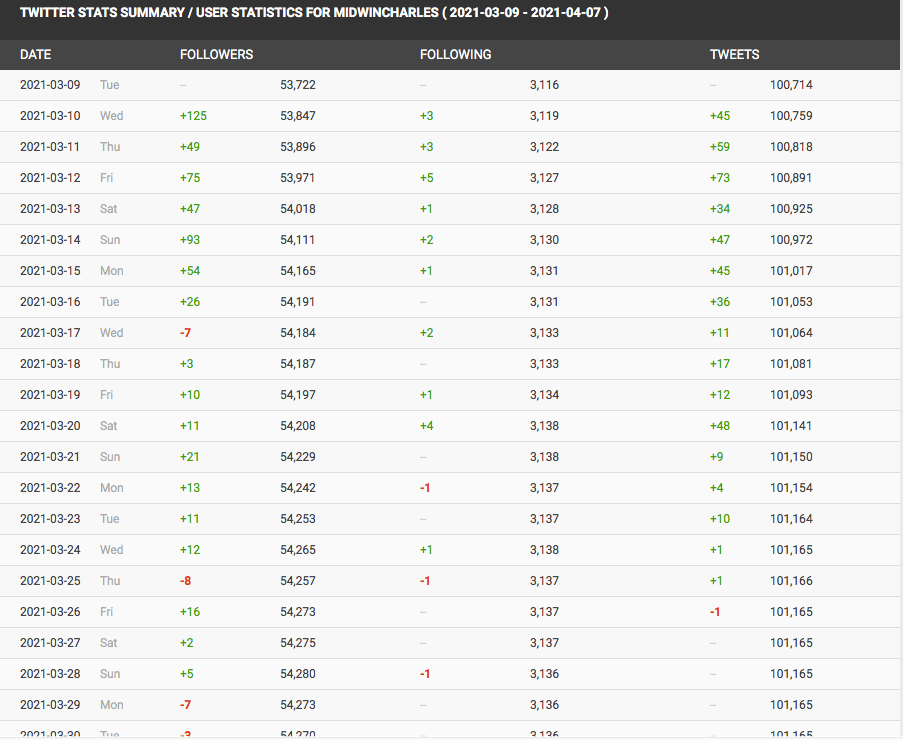 There was no further activity until Tuesday, April 6 when the family announced she died, 37 days after the first announced experimental shot. 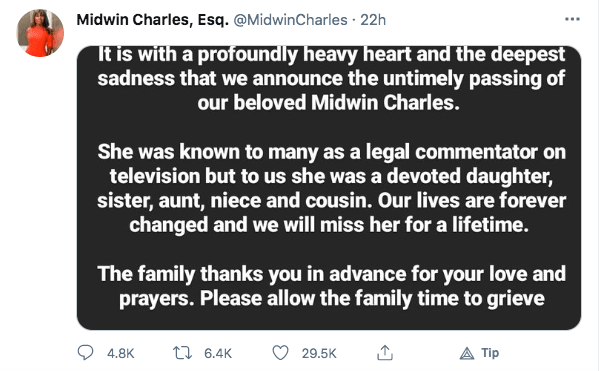 This dramatic change in social media behavior suggests she was unable to tweet for over 12 days before passing away. Perhaps she was hospitalized after the second shot. That or she died in late March after the second shot and the family is just now announcing it. Regardless, she has gained 1,163 new Twitter followers today. She gained 481 total in the prior 30 days.

Mainstream media censors cause of death

As we’ve learned in 2021, vaccines are the leading cause of coincidences. A Google search for Midwin Charles right now brings up stories from The New York Post, New York Daily News, Newsweek, The Hill and a few others as the top results. None of said stories mention the experimental mRNA shot she received on March 1. The experimental Johnson & Johnson viral vector shot had just been authorized for emergency use two days earlier. Thus she received the Pfizer or Moderna mRNA shot.

Ms. Charles was born in Brooklyn. She received her law degree from American University in Washington, D.C., and owned a law firm in New York City. She was best known for being a legal analyst on MSNBC and CNN. There are many segments of her criticizing people for not wearing masks, social distancing, etc.

She was not married and had no children.

Mainstream media are upset not because Ms. Charles is dead. She is the latest public figure to die after receiving experimental shots. Like Marvin Hagler, Larry King, and Hank Aaron, it’s much more difficult to bury these deaths after experimental mRNA shots. Everyone is paying attention.

Ms. Charles was not dumb. She was certainly a valuable tool in the COVID-19/vaccine agenda. But this once again is another example of seemingly intelligent people allowing this to happen to themselves. Experimental mRNA and viral vector shots don’t play favorites. They kill public figures just as quickly and/or slowly as regular folks. Stay vigilant and protect your loved ones.

Regardless of her state of health, she died a month after the Pfizer vaccine. (It is also certainly possible she got the booster, which would have been immediately prior to her death,) However you look at it, it is very concerning.

Very concerning in this case. If the virus reverses what is expected and enters DNA and possibly a gene sequence, there could be many unintended consequences.

…and make sure, no matter what, you are wearing at least two masks at all times.

So sad that so many people fall for this lie. These are not vaccines, common people are being used as test subjects for Fauci and his China buddies. He and his evil kind are making 100’s of millions. I had C19, yes I was very sick for a couple weeks and I have lingering after effects but I am alive. I will not accept injection of this poison no matter what “they” say.

Scary. Like Creepy Coup Joe saying the Constitution isn’t really meant as our Creed, so he lied when he took the Oath to uphold our Constitution. I will take no inhibitor as an experimental rat for these thieving psychopaths and their berserker hoards. I will stay strong, brave, and ready. Interesting times ahead….M

Her Instagram said she experienced shortness of breath after shot on 3/1. Then on 3/19
she cancelled going live on IG because she didn’t feel well, maybe shot 2.

It’s not as though many of us weren’t warning people about this “vaccine”.

How many black people have died from these vaccines?!!! I’m black, and EVERYONE I know, is NOT getting ANY vaccine!!! We’ll take our chances, thank you!

Increase your Vitamin D intake (discuss it with your doctor) people often are deficient and this is a likely causation to worse outcomes with COVID-19. Vitamin D is crucial in the bodies immune system functioning correctly. You increase your chances of having a milder case of COVID-19 by 80% with adequate vitamin D levels.

Well I cannot tolerate much of it at all even though mine is low, and there may be others like me.

I am happy to hear this. I am white and everyone I know (practically) is getting it. I wish white people were as smart as Blacks (I’m not joking…)

It’s sad when someone like this young lady (who certainly qualifies as being intelligent – at least in the objective sense of the word), can fall for the propaganda being spread by Big Pharma and the MSM for nefarious purposes. I have to believe that this otherwise intelligent person fell for the Big Lie hook, line, and sinker without doing the necessary research on this whole scam and ended up paying the ultimate price. Prayers for her family and hopefully they’ll rethink their position on this whole scam.

She sure fell for all the agendas. If you peruse her social media, she was not kind to covid skeptics.

satanic overlords demand you get the Death shot

Yet another coincidence right ?

Now….16 months of this scam – after predicting and warning others it was coming 6 months before it started, flown 10,000 miles (no mask then), drove another 2000 or so, shopped, NEVER ‘locked down’ – EVER – threatened with arrest for the crime of ….tennis…surfed, skin dived, skateboarded…..never put a mask on.

In ALL that time, I had 2 clients tell me they ‘felt blaaah’ for 2 days, and one friend I had lunch with, 3′ away, said he wasn’t feeling well, got home, fever, 2 days in bed, 2 days recovery, back at work on the 6th day.

Some killer. Where are all the sick and dead and dying? I filmed my 2 major local hospitals on several occasions – virtual ghost towns.

A nurse at one CONFIRMED ‘there’s no one here’ when I was in the actual hospital (heart) AND confirmed that the news had come and shown a line of cars waiting to be admitted – were just staff they got to sit in their cars and PRETEND to be patients, waiting!

I was in the ER myself, and there was only one other older lady there who’d fallen and hurt herself. There wasn’t another soul in the entire ER wing – maybe like 40-something rooms? Extremely limited staff (my photos showed Staff parking to be virtually empty).

But try telling this to people like this idiot here who called people like me conspiracy theorists and whatnot.

IF YOU EVEN GET THE DAMNED THING! (I think I saw something like a 1 in 91,000 chance of even GETTING sick!)

So it’s good to see those supporting this hoax (no such thing as ‘Covid 19 exists, anyway!) are paying the price for their complicity.

Does this seem rude and uncaring?

Perfect. These people have DESTROYED millions and millions of lives for their 30 pieces of silver.

And they would happily applaud seeing the unvaccinated freedom loving dissidents marched into fema camps. This is not a game and she was part of the destruction of liberty.

No one needs these experimental shots, but everyone has been brainwashed in this country to get them. If the Government and medical community had been honest in the beginning of this virus, they would saved 100,000s of lives and have told everyone to start taking vitamin D3 4000iu daily, with K2, ZINC, vitamin C, melatonin, quercetin, and a quality multiple vitamin daily. Your immune system could have easily protected you from Covid 19. But no they would rather lie, and control people then to tell them the truth.

There is no “covid” deasese . The so called “virus” has not been isolated. Wake up.

My husband died of covid. He was fine a week earlier. I only got the vaccine due to that. Family pressure. Don’t know what to believe.

So sorry for your loss.🕊️🙏 Was he in a high risk category for pnemonia or influenza A or B? Did he have comorbidities? Sorry to ask, there is the 0.3% who were truly infected with covid-19 and died from it but so many deaths have been attributed to covid-19 when in fact they weren’t. Just trying to get a better idea of who and how it has affected people.

Good suggestion on the immune support supplements. One of my clients had a blood pressure spike from the 1st dose of the vaccine. Suggested that his family not take the shots and got them all on the alternative treatment protocols including ivermectin. They all got the virus, probably Delta variety. He and his wife received the monoclonal antibodies and all of them recovered. Other than some lingering respiratory issues they appeared to be in good shape a few weeks later.

My mother died 4 days after Moderna #1 vaccine on March 12, 2021 in FL. She was 78. Yes, she had 2 comorbidities but no where was she warned about them, in fact, her primary doctor encouraged her to get the vaccine! Pharma and CDC MUST be more honest and upfront about adverse reactions and death risks!! If they hadn’t played them down, my mother would still be alive!!

So sorry to hear of the murder of your mother. May God bring this evil down on the heads of Gates, Fauci, and all involved.

I had Covid and test anti-body positive. I do not need nor would I take the poison “vaccine”. I contacted my states Dept. of Health and asked if I am antibody positive why can I not be assured a “passport”. The response was, “we do not comment on policies with individuals.

Thank You for posting this account. This young, very dynamic, & successful woman just Dropped Dead-!!!.. I remember seeing her as a guest many times on National TV. She was highly educated, articulate, idealistic, & very pretty!!. I enjoyed & appreciated her legal analysis. When she abruptly died, I looked into it, and it seemed like she had a SERIOUS Pre-Existing condition of SEVERE ALLERGIES!!. When I researched it, I started to realize that she likely had a Fatal Allergic Response to the Vaccination, which is considered extremely allergenic. For that reason, the CDC recommends that you NOT take these shots if you are Allergic to the ingredients, or other vaccine injections, etc. Apparently, Midwin dutifully kept an Epi-Pen with her, but that was NOT enough. Severe allergies can be unpredictable & her body could NOT handle both of these dosages, internally!!.. She was a life-long SEVERE Allergic!! As a result, she may have died in extreme pain. And she & her family had no time to prepare for her demise!!…
I still can’t believe she often was SO full of Life on my TV, & then suddenly, dropped dead!!..
This was a tragic loss. Thank you for highlighting her predicament, as fair warning!!-