WARSAW, POLAND — A Polish doctor participated in the trendy “vaccine on camera” phenomenon on or around January 29. He was dead a couple weeks later.

Dr. Witold Rogiewicz did what many others are doing in the era of COVID-19. He rolled up his sleeve and proudly gloated about receiving the second dose of the experimental Pfizer mRNA shot on camera. He shared the video on social media.

At least three million Polish citizens have received the Pfizer, Moderna or Oxford/Astra Zeneca shots as of March 3, according to Reuters. Dr. Rogiewicz not only got the jab on camera, but also decided to mock and insult everyone with a healthy skepticism related to the experimental shots.

The original video was removed from Youtube. But here it is published on Rumble.

A rough Polish-to-English translation of the video reads as follows:

Vaccinate yourself to protect yourself, your loved ones, friends and also patients. And to mention quickly I have info for anti-vaxxers and anti-coviders if you want to contact Bill Gates you can do this through me. I can also provide for you from my organism the 5G network. I am sorry I hadn’t spoke for a bit but I was just getting autism.

His attempt at humor was well-received by Youtube commenters before the video was removed. We’re neither going to dignify his comments with elaboration, nor add insult to ultimate injury. But the Gazeta Wyborcza newspaper in Warsaw reported that Dr. Rogiewicz died on or around February 15.

Dr. Rogiewicz’s funeral was on February 22 in the town of Milanówek. He was a gynecologist and obstetrician at VIP Clinic (OViKlinika). The clinic took down its Facebook page after the doctor’s death. But the clinic did a final post acknowledging his death. 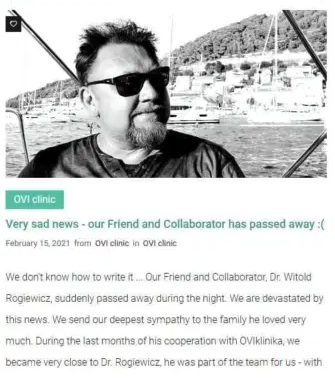 Polish “fact-checking” websites are already saying that he died from a heart attack and that the experimental shot had nothing to do with his death. One website noted that his daughter, Małgorzata Rogiewicz, said her dad died of a heart attack. He was also diabetic and had heart disease, according to his daughter.

If you can join them beat them.
RIP to your retirement party

proud to be anti-vax

They all will die in a year time after the vaxx.

It really is almost like they KNOW, deep down in their subconscious, that the vax is deadly. Otherwise why act like they do with such hatred towards the unvaxxed?