ROBINS, IOWA — A 73-year-old Iowa man received an mRNA shot on Tuesday morning, February 16. He had a headache afterwards, so he laid down for a nap, according to daughter, Dawn Dietz. Mr. Dailey never woke up from the nap. 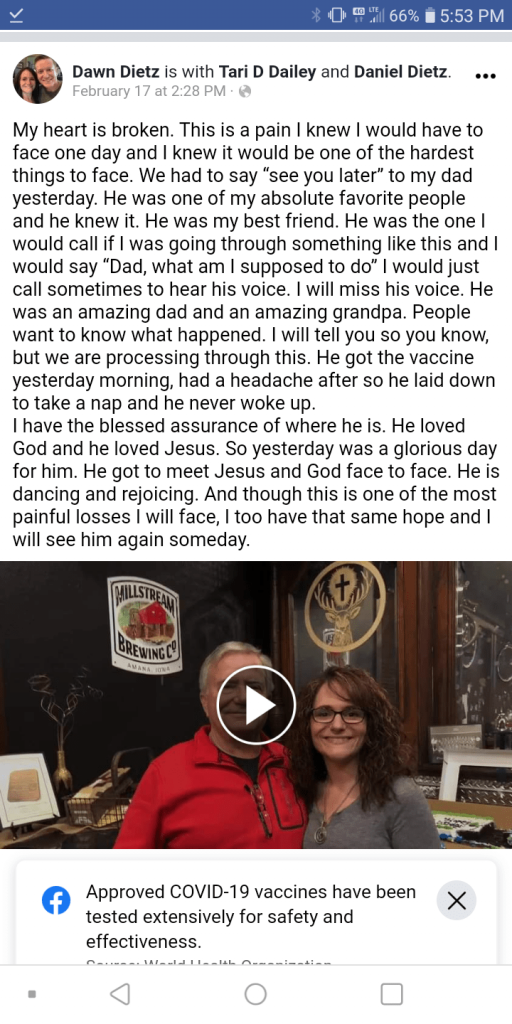 Facebook added the ultimate to injury, placing its “vaccines are safe” message right after Mrs. Dietz’s post. It is unclear whether Mr. Dailey got the Pfizer or Moderna mRNA shot.

There has been an outpouring of condolences since his death. Mr. Dailey was the Director of Store Operations at Cedar Valley Habitat for Humanity ReStore. He was also a volunteer for the organization. Mr. Dailey was co-owner and operator of Ogden & Adams Lumber in Cedar Rapids, Iowa from 1991 to 2012. His Facebook page indicates that he was married.

Protect your senior loved ones

The question is fast becoming “how many deaths are enough?” Mainstream media are simply not covering any of these deaths and continue speaking glowingly about mRNA shots. It is up to individuals to educate themselves and loved ones.

We had our second shot and I feel fine-76 -took a Zumba class snd a total body class today and didn’t even breathe heavy-now Om reading all this snd sm getting stressed-true,I don’t trust go to snd don’t believe Mack’s work-if they did V no one would be getting it-any vac had a possible bad side effect-I don’t believe this is a conspiracy to kill us-frankly,I’m enough of a cynic to believe if that were the case the gift would have ALL seniors vaccinated quickly-they then could save on as snd medicare