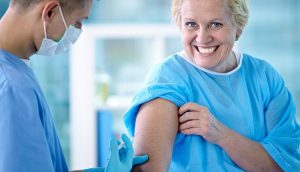 PHILADELPHIA — A marketing sales funnel is a path companies utilize to turn leads into paying customers. The top of the funnel is wide, and meant to attract as many leads as possible. The bottom, narrow part represents the people who bought your product or service at the end of the sales journey. Now a new study is suggesting that a sales funnel via SMS messages can increase “vaccination” rates.

The Wharton School’s Behavioral Change for Good Initiative (BCFG) released the study on February 18. The Penn Medicine Nudge Unit and Walmart were collaborators in the study. The population consisted of 700,000 Walmart pharmacy patients and 50,000 patients at Penn Medicine and Geisinger Health System.

The 50,000 patients received one of 19 selected text messages within a few days before a doctor visit. The messages encouraged patients to take a flu shot. At least six of the text messages significantly increased the number of flu shot recipients.

The top performing text messages increased vaccination rates by 11%. Patients received the first text message 72 hours before the doctor’s appointment. It encouraged patients to get flu shots to protect themselves and families. The second text arrived 24 hours before the appointment. It reminded patients that a flu shot was waiting for them. The Walmart pharmacy patients study yielded similar results.

Researchers concluded that text messages are unlikely to persuade hard vaccine skeptics. But they believe text messages funnels are highly effective in convincing people who want the shot to actually go through with it.

“Our results suggest a promising way to encourage COVID-19 vaccinations at scale—we can potentially help save lives for less than 10¢ per person,” said Katy Milkman, Wharton professor, BCFG Co-Director, and lead author on both studies.

The researchers hope the study helps accelerate the COVID-19 mRNA efforts in its early distribution stages. They believe doctors and media must simplify the messaging to convince people who are on the fence.

“Our results reveal opportunities to make simple changes to the wording in those campaigns that could nudge vaccination rates higher and help us end this pandemic faster,” said Mitesh Patel, Penn Medicine Professor and PMNU Director.

The full study can be seen here.

Mainstream media, big tech and government are literally depending on acquiescence to get people injected with mRNA. The New York Times published an article this past week literally discouraging critical thinking in favor of blind obedience.

ironically the Bible foretells of the depopulation Covid vaccines in Revelation chapter 18 verse 23. “All nations will be deceived by thy Sorceries.” The word sorceries in the greek translation means ‘pharmakeia’. We are now seeing ALL nations being deceived by poisonous drugs being administered by a well organized “pharmacy” system!.Amazing how the Bible is still the most up to date book one can read! God loves His creation so much that He forewarns of the enemy’s plans!

Jesus is the way, the truth and life.