UPDATE April 11, 2021 – Finally some good news. Ms. Kristi Simmonds found a doctor in Kentucky who gave her pulse wave electric therapy. She is now feeling as close to normal as she has since the experimental shot. Ms. Simmonds also has a very strong message for those considering these experimental shots. 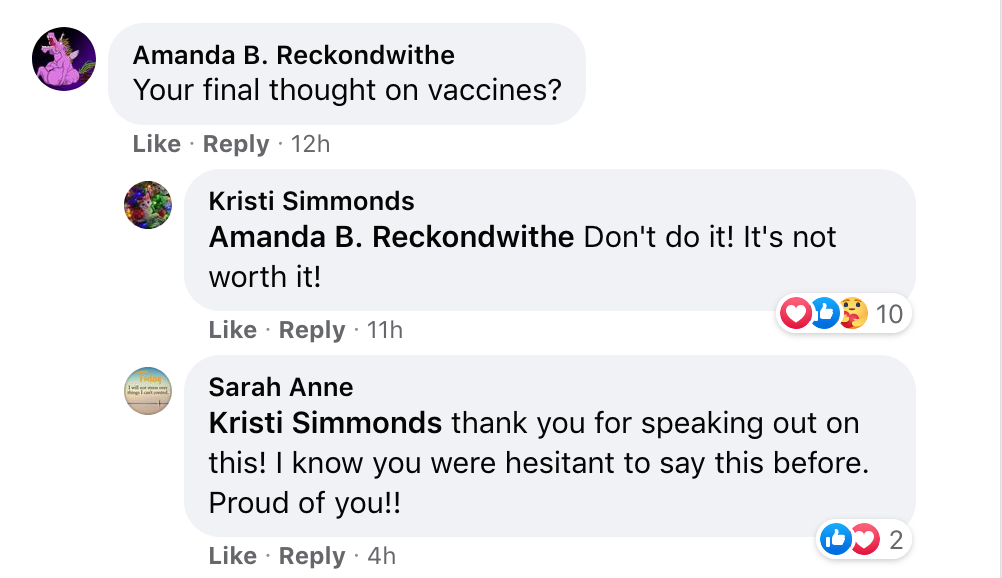 BAKERSVILLE, NORTH CAROLINA — Ms. Kristi Simmonds has been a registered nurse since 2007. Her hard work and dedication to the profession led to a clinic manager position at Kindred at Home Care Services in October. Ms. Simmonds wanted to lead by example. She received the Moderna mRNA shot on January 19, according to her Facebook page. The goal was to protect her patients and co-workers, while also demonstrating that the shots are safe. She is now warning people to exercise due diligence before getting the jab.

Ms. Simmonds throat and tongue swelled up so much that she could barely breath. She went to the hospital on January 21. Doctors prescribed her Benadryl and sent her home. Ms. Simmonds rested for four days and returned to work, thinking the worst was over. Her whole world changed that night when she got home. Ms. Simmonds started having uncontrollable convulsions and muscle spasms.

Ms. Simmonds in her own words

The 40-year-old registered nurse shared this video on Facebook in January 30. She tells you in her own words, while fighting through the tremors, what she is experiencing. The video has over 14,000 shares as of publishing.

Ms. Simmonds said she has spoken to five others who are suffering similar adverse effects to the mRNA shots. We’ve covered two of them – Shawn Skelton and Angelia Gipson Desselle, the latter being the mother of Brant Griner.

UPDATED February 5, 2021 – Ms. Simmonds published an update video. She said she is taking herbal supplements to try and mitigate the tremors.

Ms. Simmonds also said she can no longer work as a nurse. She, like the others suffering these harsh adverse effects, is getting trolled on social media and hate mail from people saying she is faking. But she’s also getting a lot of support. Ms. Simmonds said she cannot tell people to take the vaccine or not, but admitted she did not do any research prior to getting the shot.

The symptoms are not the only commonality in these stories. None of these women have been able to find anyone to help them. Further, nobody will ever be held liable if they are permanently disabled. The National Childhood Vaccine Injury Act of 1986 and the Public Readiness and Emergency Preparedness (PREP) Act of 2005 provide two layers of immunity for Pfizer, Moderna and all other mRNA and vaccine makers. They cannot be held liable in court.

What’s next for Ms. Simmonds?

It appears the U.S. medical establishment is denying help for people with severe adverse reactions to Pfizer and Moderna mRNA “vaccines.” When something like this happens, you’re on your own to figure out how to manage your life going forward.

Ms. Simmonds has a GoFundMe page to raise money for her likely life-long medical care. Despite the severe reaction, Ms. Simmonds said she still believes in vaccines. Nobody should be forced to take experimental mRNA shots to remain employed.

Any health “professional” who blindly accepts the media/hospital administration narrative that these vaccines were safe, are fools and should be striped of their license. Do I feel for this woman, yes I do, but I am not medical expert yet I know deep in my gut something is not right. These medical professionals should ask themselves, why does the world need a vaccine for a virus with a 99.8% survival rate? Why is the government pushing this vaccine on everyone after seeing protesters, rioters not dying after all their close contact from looting stores, rioting and attacking/killing others? Why did the CDC group all illnesses under COVID BEFORE the election? Why does COVID stand for–CERTIFICATION OF VACCINE ID…it has NOTHING to do with a virus? Why can’t we the people hold vaccine companies liable if side effects occur, if there is nothing to hide? Moderna is actually stating, on their website, the mRNA shot is really gene therapy and not a vaccine at all. If a regular person is asking these questions, why aren’t nurses and doctors doing the same? Don’t take this poison, the shot has not been tested–we are in the testing phase currently–we are the guinea pigs and medical professional are too busy virtue signaling to look past the narrative. I hope these nurses enjoy their TIK TOK days, because very soon they will be held accountable for injecting innocent people with this deadly shot.

MEDICAL DEVILS CAN NOT BE TRUSTED
Reply to  skepticalbynature

It just makes me SHAKE MY HEAD…… that Someone get’s injected with a POISON , like a SERPENT biting it’s VICTIM, and it causes HAVOC in their HEALTH and they still say ” I still Trust this SERPENT, I know it means no HARM “

Thank you, you hit all the points I missed bringing up in my info, especially Certificate of Vaccination Identification. The 19, maybe for AI, one-A, 9-I.

Tragic irony that it is COVIDIOTS abusing and questioning these victims. Given the victims have invariably been former COVIDIOTS. It is interesting that the victims of severe reactions have been the east informed, even when they were health care providers. I’d noticed of course that the believers in COVID and pro-mRNA vaxxers have no more information than is being spread by the media. All it takes to moderate people’s opinion on this is a modicum of research.

MEDICAL DEVILS CAN NOT BE TRUSTED
Reply to  Rabbitnexus

EVERYONE needs to QUIT WATCHING the BRAIN WASHING MEDIA…….Quit Watching your Local News….Quit Watching CNN, FOX NEWS or any other BIG PHARM OWNED news media. They are PAID by EVIL BIG PHARMAKEIA to say what they want to be said…… The MAIN STREAM MEDIA can put people into a TRANCE and within their minds they are saying ” YES MASTER, I OBEY, I OBEY “.

I just watched the two videos. I already want nothing to do with this “Experimental Biological Agent”. This is just one of many confirmations. I was anti vaccine before this death dealing thing came out. I would like to know if this person will be alive in 18 months. Sorry, but I doubt it.

Vaccines are supposed to impart immunity and keep an illness from spreading. These concoctions do neither, so they are not vaccines. They are mRNA shots that modify your DNA. It astounds me how many medical professionals do not seem to know or understand this.

You might be right about the reactions [disinformation removed by moderator].

So many doctors and hospitals are being paid big money to push it. Money over lives. Others, like this woman, are just too trusting.

I am glad she found a treatment that helped restore her body to a great extent.

Dr Judy Mikovits has repeatedly said…50 million Americans will die in the next few years. Horrifying….the US military will be wiped out, Finance, medical, food logistics, power, utilities, etc. may stop as it is not easy to replace skilled professionals on short notice.

Does President Biden and the Pentagon realize that America is heading for a big danger?

Russia and China are definitely not harming their vast populations via their vaccines which are normal flu shots and which will stay in the arm and will not cause blood clots.

It is the blood clots that will kill the 50 million Americans. Plus tens of millions more in Canada, Europe and Asian countries that uses Pfizer, Moderna, etc.