SYDNEY, AUSTRALIA — A 33-year-old Sydney-based actor is dead, as authorities and friends push the most ironic cause of death possible.

Mr. Francis Mossman, aka Frankie Mossman, received the second dose of experimental Pfizer mRNA on July 30, according to his Instagram page. 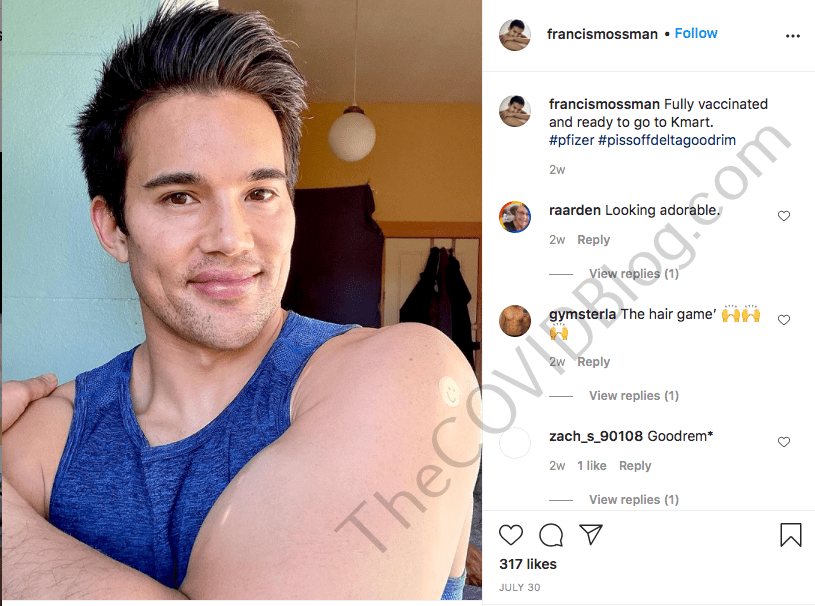 He never posted much about COVID-19 or experimental injections. Most of his recent Instagram posts were about one of his three dogs that got hit by a car on May 19 and the lockdowns in Australia. He typically posted something new every three days or so. But there were only two more posts after the second Pfizer injection, with the final one on August 12 talking about him “enduring pain.” 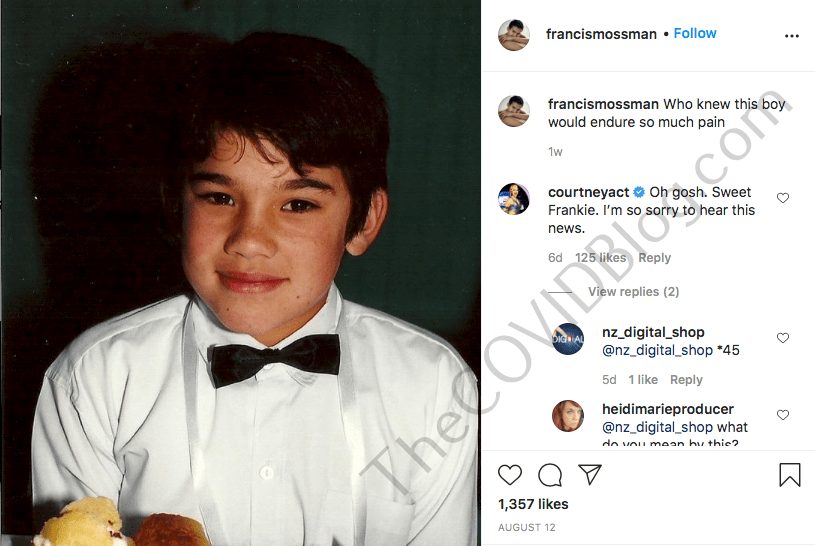 Mr. Mossman passed away on August 14.

Australia and New Zealand media initially did not report a cause of death. But the New Zealand Herald reported suicide as the cause of death on August 15. Of course that report prompted many Twitter and Instagram users to point out that receiving any of these injections is de-facto suicide. We won’t post the screenshots. But a common theme is that he died from genocide, not suicide, 15 days after the injection.

Mr. Mossman’s final Instagram post, however, provided a convenient gateway to utilize suicide as the cause of death. Further, the family released a statement saying that the lockdowns triggered childhood pain.

Recently, Francis had been struggling with the resurfacing of old scars and trauma from high school, which he acknowledged in his last [Instagram] post to the world was a pain he had endured from a young age. The world we face right now is a weight on many shoulders, including those in the arts who have had their livelihoods heavily impacted by Covid lockdowns.

This blogger fully understand that “vaccines” are the leading cause of coincidences in 2021. There’s no denying that Mr. Mossman received the experimental mRNA injection and died 15 days later. If the family wants to argue that lockdowns killed him, then COVID-19 dystopia, one way or the other, killed him.

Mr. Mossman was very adamant about letting his homosexuality be known. 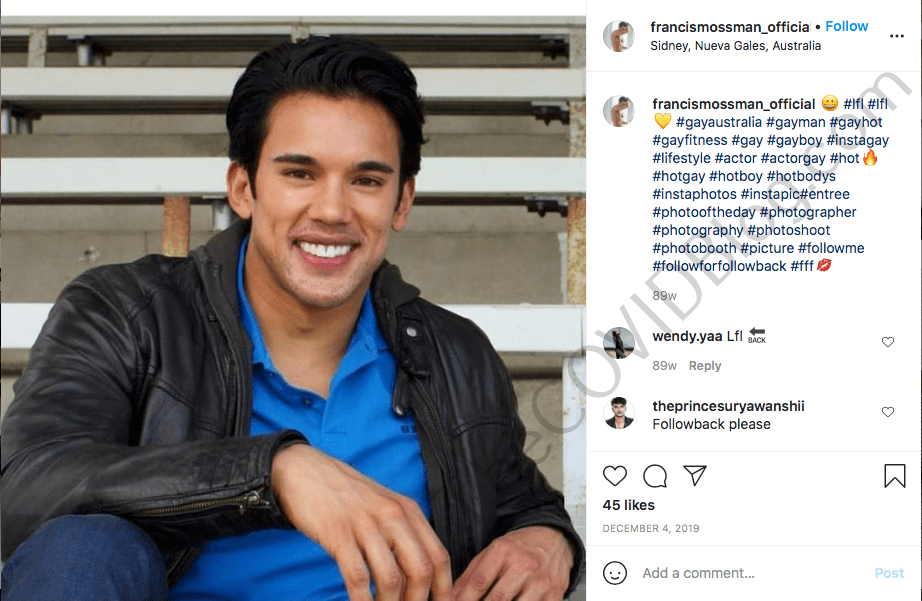 In fact the aforementioned TV series The Horizon is about a group of homosexual male friends. The truth is that people who follow liberal lifestyles are far more likely to receive the experimental injections and be loud proponents thereof. They are also the easiest to deceive. Those who self-identify as participating in homosexual culture are very loyal to the mRNA and viral vector DNA agendas.

A study released early this month by the Human Rights Campaign (HRC) Foundation found that 92% (n=15,042) of Americans who identify as “LGBT” have received at least one of the experimental injections. HRC is dubbed the “largest LGBT rights organization in the United States” and is thus unbiased on the subject. We wrote about Jason Maurer in June. The 45-year-old bartender died five weeks after his Moderna injection, but not before telling the world “shut up and get your vaccine.” He was also very loud about his homosexual culture.

At this point, the only people still falling for the COVID-19 agenda are either manually mind-controlled, brainwashed beyond repair, and/or willing guinea pigs. The whole “LGBT” agenda is premised on forced, coerced deceit and subterfuges. The bearded, fat, hairy man is a woman; and if you don’t refer to him as such, you are “a bigot.” Today you must get these experimental injections or you are a “Q-Anon Trump supporting granny killer.” The pre-determined, circle-jerk rebuttals and talking points ensue from there. Same methods, different agenda.

Now you will have to answer for your Abomination. That community deserve far worse in my opinion for what they have done worldwide, like destroying 2 entire generations of youth, my generation and the upcoming one, pushing their filth upon everyone. My own country of Ireland is dead, finished because of these perverted individuals, they themselves are a plague upon society. I don’t care if nobody agrees with me because i can’t even walk around the corner from my home without seeing this abomination in some form and children have to grow up in this toxic pro LGBT culture, they are in their schools and everywhere you turn, exactly why i myself can never bring children into this world, because of these very people.

Actually no it doesn’t. What about saying a regular pedophile?

Lgbtq etc is not normal. It does nothing good for anyone. Now go ahead and counter that.

They used all of you people to say it is not a choice so they can say the same about pedophiles not being a choice.

Go do what you want, as you will, but don’t dare say a dick up another man’s ass is regular.

You are right, Qwerty. It is certainly not natural, as it cannot result in procreation. They are genetic dead-ends. I am sick of the LGBTQ orientation- a minority one at that- being thrust in our faces 24-7. The majority of men and women are heterosexuals, and it is just as well, as the human race would obviously cease to continue itself, otherwise.

In actual fact, there is a high incidence of paedophilia among homosexuals; look up: NAMBLA (North American Man-Boy Love Association) and PIE (Paedophile Information Exchange). A number of homosexuals want the age of consent lowered or abolished altogether! Check out, on youtube, a channel called ‘CC Unit’ (Creep Catcher Unit). A majority of their ‘catches’ are homosexual adult men who are trying to meet up with underage boys of around 14/15 years of age.

92% LGBT vaxxed. The world may soon be very different.

I get the feeling that The Powers that Be are not quite so enamored with “LGBT” as they might publicly claim to be.

Just because they “endorse” it when the cameras are on for political expedience; behind closed doors they likely have a very different view.

The word “pride” is the puzzling word and indicates the bastardization of the English language.

Pride is manifest (or should be) when you accomplish something: climbing a mountain; painting a beautiful portrait; winning a marathon; i.e. a genuine achievement.

Why would someone manifest “pride” predicated on the demographic of people they like to have sexual relations with?

If sexual orientation is fixed at birth; and I am willing to concede that there is some evidence to support that notion; I seriously doubt a simple sexual longing or desire (be it straight or gay) is something a person should be marching in parades over; and telling the world how “proud” they are of what is really not much more than a bestial urge.

yes,riding my bike, I ran across a “gay pride parade” in big city.

I had never seen anything like that. After a few minutes I felt like vomiting and had to leave as quickly as possible. It was vile and disgusting.

Agreed John, Dr. Lorriane Day worked on AIDS research back in the 80’s and she said the whole push for homosexuality was not for the well being of these individuals, but rather as a means to depopulate–along with all vaccines, push for abortion rights and environmentalism. Homosexuality is considered a mental disordered, which is why the majority of them have a history of abuse in childhood. Every time a gay man went to get treated for any illness, they were injected with a contaminated shot (Fauci’s Hep B–which was laced with the AIDS virus) that they thought would protect them. She also stated that community was the most vile against her, when she pointed out their lifestyle contributed to the spread. The LGBT community is not kind and accepting, they are judgemental, cruel, and ostracizing. I see it with personal interaction, you don’t agree with them, you are given a verbal tongue lashing and are cut off. However, do not let this stop you from having children–they are a blessing and one of the most joyful experiences–you have knowledge to do things better than what is around you–walk the path of oinestly and love with them and they will walk beside you. Good luck.

I’d say it likely was suicide but the thing about the v (and the subsequent dna alteration) is that it does a number on mental processes. (When neurological issues are rampant in the future we’ll know why). It likely caused him to dwell on whatever issues he had experienced in the past. In many ways reliving those moments (on a repetitive loop) and the anguish that they caused.

“The whole “LGBT” agenda is premised on forced, coerced deceit and subterfuges. The bearded, fat, hairy man is a woman; and if you don’t refer to him as such, you are “a bigot.””

Wow, i totally disagree with you. I am myself a bisexual living woman and I am proud and happy to live openly like that. But this hatred speech against homosexuality is just not right. You can be whateversexual and still think about your health – to do so, you just have to have a brain. I really liked this blog, and I will continue to read it. But this stereotypes should be ended on so many levels… Spread love and unity, not hate! We are all in this together and we will be stronger standing up as one as well.

Thank you for supporting and reading the blog. It’s ok to totally disagree and we’re not censoring your disagreement. I disagree, however, with your premise of spreading love and unity. The COVID Blog spreads truth. Love and unity are worthless in a society of lies and subterfuges, which we’re living in now. There is nothing untruthful about the statement you quote. Truth is never comfortable. Many Trump supporters attack the blog because of truth about him. I disagree with your premise that truth is “hatred speech.” It’s simply a phenomenon that if everyone lived by, the world would be a much better place.

Thank you again for supporting the blog.

The MAGA Crowd is Running on Maximum Extra Strength Kool Aide…they can’t see that Donna is trying to exterminate them and they can’t even see that Donna and the entire clan are Switch Hitters…It is all of them.

This article does not spread hatred, just because you do not agree with the premise. The author has a right to express his opinion. If you feel offended, that is your issue. We live in a society that gives us the right to free speech. I do not judge someone by their sexuality, but the gay community centers their entire identity around it. How can anyone in real life, take a bearded man seriously when he wants to be referred to as a woman–it is delusional. NO ONE CARES about anyone’s sexuality–be a good person, help others and reveal your PRIVATE sexual preferences to potential partners, rather than advertising it publicly for all to know. Is there a heterosexual flag? You get a rainbow as a symbol, do heterosexuals get the horizon? Do traditional families with heterosexual parents get a parade? Can a straight man occupy the women’s bathroom? Are heterosexual men welcomed in libraries during story time, twerking in front of the young children (like transgenders have done)? The answer to all those is NO–so what makes any other community worthy of this attention? Yes, we are in this together, but referring to a difference of opinion as “hate speech” is shaming and in an essence, hypocritical. At the end of the day, keep your private life, private, along with your medical history.