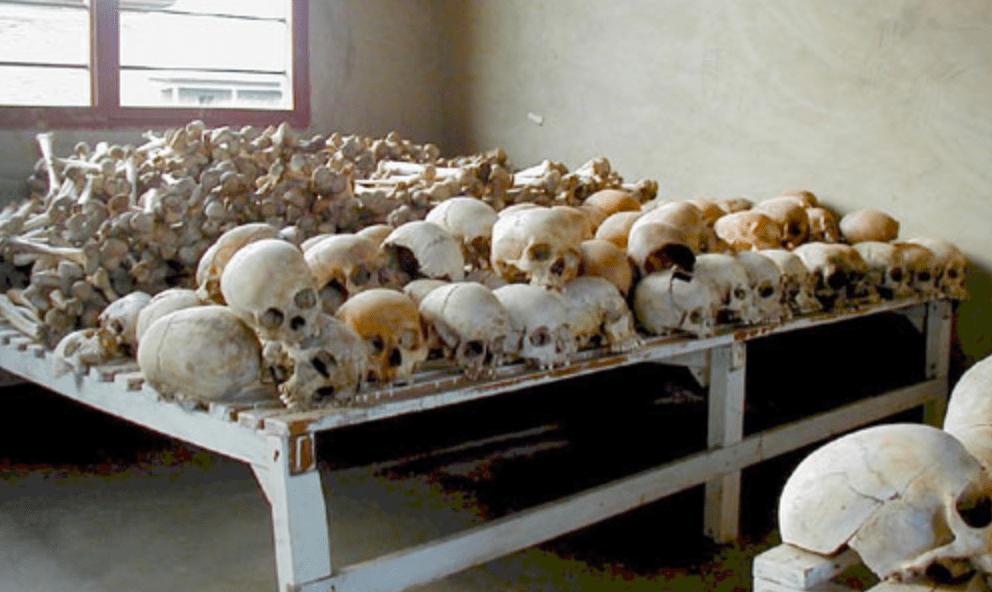 Radislav Krstić, the Bosnian Serb general, is a modern-day case defining genocide. Krstić, former Serbian and Republic of Yugoslavia President Slobodan Milošević, Colonel-General Ratko Mladic et al., were charged with war crimes for their acts during the Yugoslav Wars in the 1990s. Milošević died in jail before his trial concluded. But the other two set interesting precedents.

The Srebrenica massacre is described by many historians as the single-worst crime on European soil since World War II. More than 8,000 Bosniak Muslim men and boys were slaughtered in a matter of days, in July 1995.

The International Criminal Tribunal of the former Yugoslavia indicted both Krstić and Mladic for their roles in the massacre. Mladic was convicted of genocide in 2017. Krstić was convicted of genocide in 2001. But an appellate court reduced his conviction to aiding and abetting genocide. Thus an international war crimes tribunal defined genocide as killing 8,000 people as recently as 2017. It doesn’t need to be hundreds of thousands (and ignored globally) like in Rwanda to be classified as genocide. Pay attention Pfizer, AstraZeneca, Johnson & Johnson, et al.

A total of 9,667 deaths after COVID-19 shots have been reported to EudraVigilance and the Vaccine Adverse Event Reporting System (VAERS), according to Health Impact News. These online databases facilitate reporting of adverse reactions to experimental COVID-19 shots in Europe and the United States, respectively.

There is no simple way to tabulate results in EudraVigilance. So Health Impact News did the tedious tasks of manually compiling the data. The Pfizer/BioNTech shot has caused 3,760 reported deaths as of April 10. Moderna is responsible for 1,801 deaths, while AstraZeneca sits at 1,086 deaths. Johnson & Johnson is not widely used in Europe. But it is responsible for 15 deaths. All of the shot are responsible for nearly 300,000 total injuries as well. 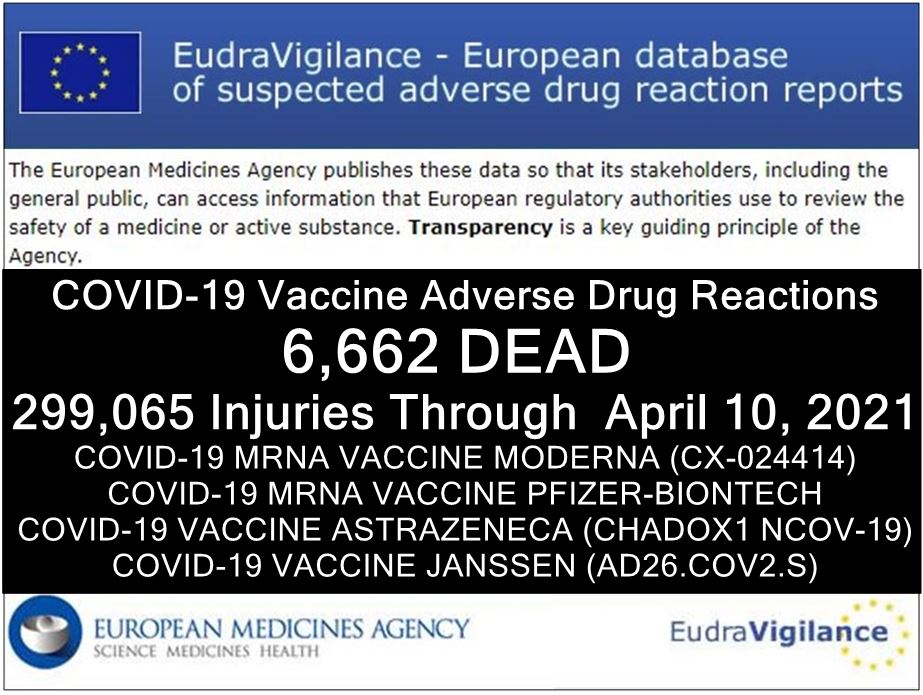 Meanwhile, VAERS has received 3,005 death reports as a result of experimental COVID-19 shots through April 12. Health Impact News found that the 3,005 COVID-19 vaccine deaths from the last four months are more than all vaccine deaths total for the prior 13 years.

Keep in mind that these deaths are only the reported deaths. A 2010 Harvard Pilgrim Healthcare study found that fewer than 1% of vaccine adverse effects are ever reported to VAERS. Thus there are likely upwards of one million deaths if all were reported. Most people don’t bother using these databases. Both are difficult to navigate and not user-friendly. Further, the CDC still states the following on its website:

To date, Vaccine Adverse Event Reporting System (VAERS) has not detected patterns in cause of death that would indicate a safety problem with COVID-19 vaccines.

Search “has anyone died from vaccines” in Google. All of the results are “fact check” articles falsely claiming that either nobody has died or that the shots did not cause the alleged deaths. It’s becoming painfully obvious that the number of deaths matters not to a psychologically-manipulated populace.

People literally yearn these shots like money, like sex, like a dream job, etc. As a result, the drug companies have an extra layer of protection. Most shot recipients volunteer and even celebrate when they get the shots. Can genocide be voluntary? It’s all quite surreal. But if the international standard is 8,000 deaths, the COVID-19 experimental shot agenda is clearly genocide and many pharmaceutical executives must be held accountable.

All we’re seeing now is the short-term effects of these shots. Humanity is not only going to look very different in five years, but also will number far less. Check back here in two years. There will be millions of women and couples complaining of infertility and inability to conceive. That is part of the plan too. Stay vigilant and keep spreading truth as much as possible.

So this is all coincidental right? I pray the Lord will bring down their evil plan to kill millions and rule over whoever is left. This is modern day Nazi ism, they are using Hitler’s playbook only this time, it’s global and not just the Jews they want to kill.

This is more like modern-day Bolshevism a system that murdered more people than any other. The National socialists or the Nazis as you like to call them would never have done anything like this. Hitler’s playbook was about caring for the German people and stopping all the conflict in Europe. The war wasn’t started because of an issue with Poland, it was started because Germany took its country out of the Central Banking system thus depriving the modern moneychangers of their usury.

În Nigeria more than 34,000 Christians have been killed since 2009!!! Nobody has been judged for this genocide, as far as I know.
O Our Father in Heaven, please, stop and punish the criminals!

“Nuremberg Pharma Tribunal” released in 2007 . . .
Nuremberg Official Records From the
Nuremberg War Crimes Tribunal
Against the Oil and Drug Cartel

these tallies are for up to April 10th now it’s almost June. My sources say the world wide death reports so far add up to over 14,000. with that being just the reported deaths. another source estimates 350 million will die from these vaccines before they are banned. some of the vaccinated die 2 months after the 2nd shot. and we’ve only been doing this for 5 months, so the more recent vaccinated could start dropping dead any time now, and some doctors are refusing treatment of the vaccinated for whatever reason. I see many lawsuits in the making regardless of the claim that they can’t be sued. Too much evidence for genocide means America will find a charge that sticks.